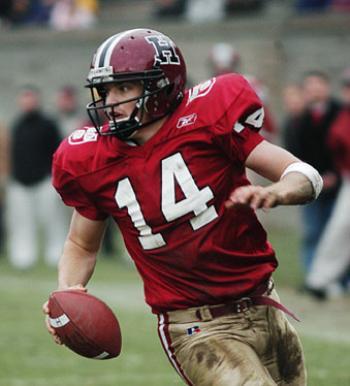 Former Harvard and current Miami Dolphins quarterback Ryan Fitzpatrick ‘05 returned to Massachusetts in heroic fashion, leading his squad to a shocking upset victory over the New England Patriots, ruining the latter’s chances at a first-round bye in the NFL Playoffs. The Harvard alum was 28 of 41 for 320 yards with a touchdown and no interceptions, and added a touchdown on the ground en route to a 27-24 win.

Tom Brady and the Patriots aimed to clinch a first-round bye as the second seed in the AFC Playoffs, needing only a victory over Miami at home. Despite being 17-point favorites, New England was bested by the Dolphins thanks to a five-yard touchdown pass from Fitzpatrick with 24 seconds left in the contest. Down four points with 3:53 remaining in the game, Fitzpatrick took over the offense from his own 25 needing a touchdown to win. Nearly 90 seconds and 75 yards later, the Dolphins had the lead.

In the twilight of the 2010s, Fitzpatrick helped Miami break multiple streaks that stretched back into the previous decade. The Dolphins had not beaten the Patriots in Foxborough since September 21, 2008, and had not beaten Tom Brady on the road since December 10, 2006. The win also forces the Patriots to play in the Wild Card round of the postseason, breaking a remarkable streak of first-round byes for New England that extends back to 2009.

The Dolphins entered the season with extremely low expectations, as offseason moves led many to believe that the team was planning on “tanking” the 2019 season in order to secure a strong draft position in 2020 and rebuild next year. At the beginning of the season, when Fitzpatrick was named quarterback, the veteran would clearly not have rolled over despite the team’s bleak outlook.

Following a slow start and a brief benching, Fitzpatrick finished the season in strong fashion. The Dolphins started the season an abysmal 0-7 but rebounded from the cellar, finishing the 2019 campaign 5-4 with Fitzpatrick at the helm. Over this stretch of games, Fitzpatrick averaged 291 yards through the air, throwing for under 200 yards only once in a 16-12 win over the Colts. Despite missing a few games, the veteran gunslinger finished the season with an impressive 3,529 yards, 20 touchdowns, and 13 interceptions.

Fitzpatrick, who turned 37 just before Thanksgiving, signed a two-year contract worth $11 million last offseason. With the Dolphins unsure about their quarterback situation for next season, the 2004 Ivy League Player of the Year is sure to be a valuable veteran presence in a young locker room. This season, however, Fitzpatrick proved that, even in his 14th campaign, he is still just as valuable to his team on the field.