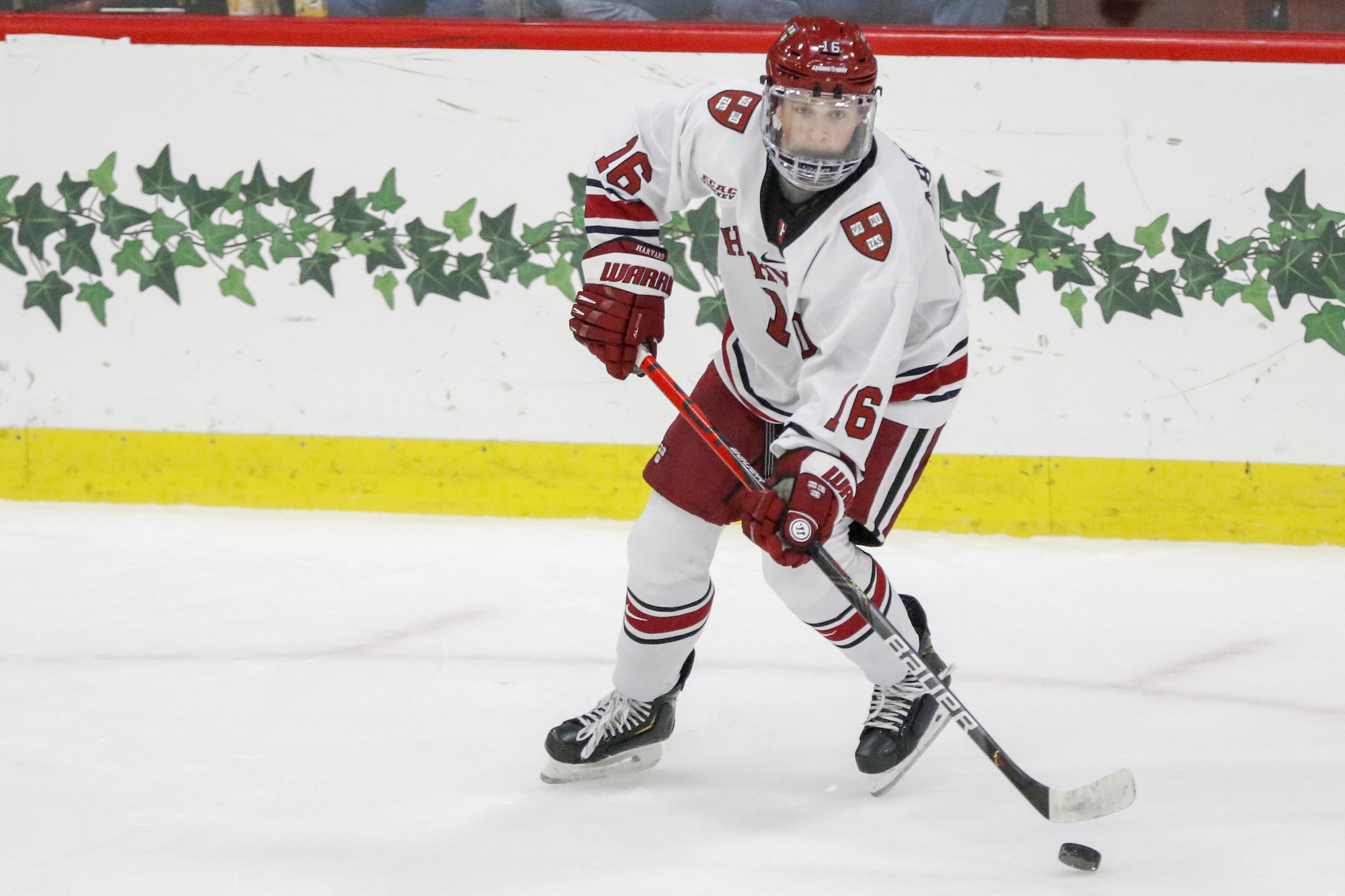 The loss to Colgate is just the Crimson's second conference defeat, but caps off a four-game losing skid the team will hope to leave behind when it returns to the ice. By Timothy R. O'Meara
By Stuti R. Telidevara, Crimson Staff Writer

The No. 12/9 Harvard men’s hockey team had only one contest left before its exam break come Saturday. The first half of its season began with impressive success — and a perfect record — that had been derailed just after Thanksgiving. Three straight losses later, the Crimson hosted Colgate, a team that has enjoyed a reasonable run so far, in an opportunity for redemption. A win would bring home two points, of course, but it would also end the first portion of the season on a positive note.

That was not to be, however. Colgate (7-7-4, 5-2-1 ECAC) drew penalties and shut down Harvard’s (6-4-0, 6-2-0) offense all night, winning the game in overtime by a score of 4-3. With the win, the Raiders catapulted up conference standings to take second place, though these two teams are tied in points. The Crimson can only hope that this forthcoming break is enough to right its ship.

“It was a hard-fought game. I give [the Raiders] credit; they battled hard,” Crimson coach Ted Donato ’91 said. “It’s disappointing [to lose] before the break, at home… This one stings, you have a chance to end the pre-Christmas break on a winning note, and we don’t do it.”

The first period had some bursts of pace, though neither team found the back of the net. The Raiders found themselves on the powerplay twice, but to no avail; Colgate has struggled on the man advantage this season, with an efficiency of 6.2 percent coming into Saturday’s clash. Yet another powerplay chance for the visitors came early on in the second, when junior defenseman Benjamin Foley was whistled for boarding.

On this attempt Colgate had good stretches of puck possession, despite a handful of shots that missed the net. That possession eventually paid off, as right at the end of the powerplay a point shot from junior blue-liner Nick Austin beat Harvard rookie net-minder Mitchell Gibson. The tally, only the Raiders’ fifth on the man advantage this season, put the visitors up, 1-0.

“To win in this league, you’ve got to play a full 60 [minutes],” said captain and forward Nathan Krusko. “We didn’t pick up guys in front, we weren’t moving our feet… At the end of the day it’s hard to pick up points here, and...every night’s going to battle a battle, whether you’re playing [ECAC] number one Cornell or Colgate.”

But their lead did not last long. Later in the frame, the Crimson had a powerplay chance of its own. The chance began with an offensive-zone shift that lasted over a minute — but was broken up by a bad bounce. As Harvard regrouped, sophomore defenseman Jack Rathbone fired the puck in from the blue line. Rookie forward Nick Abruzzese collected it at the side of the net, tucking it past Colgate sophomore goaltender Andrew Farrier.

Abruzzese’s tally began a sudden rush of scoring. Soon after, junior forward Jack Donato found stole the puck in the offensive zone, the lone Crimson shirt to two Raiders. While his shot attempt was turned away by Farrier, the puck ricocheted off a defenseman and found the back of the net, giving Harvard its first lead of the night.

Colgate answered with a tally of its own, however. Senior forward Ben Sharf threw the puck across the blue paint to find his linemate, senior Tyler Penner, who chipped it in over Gibson’s pads. The eventful middle period ended with the teams once again knotted up, this time at 2-2. 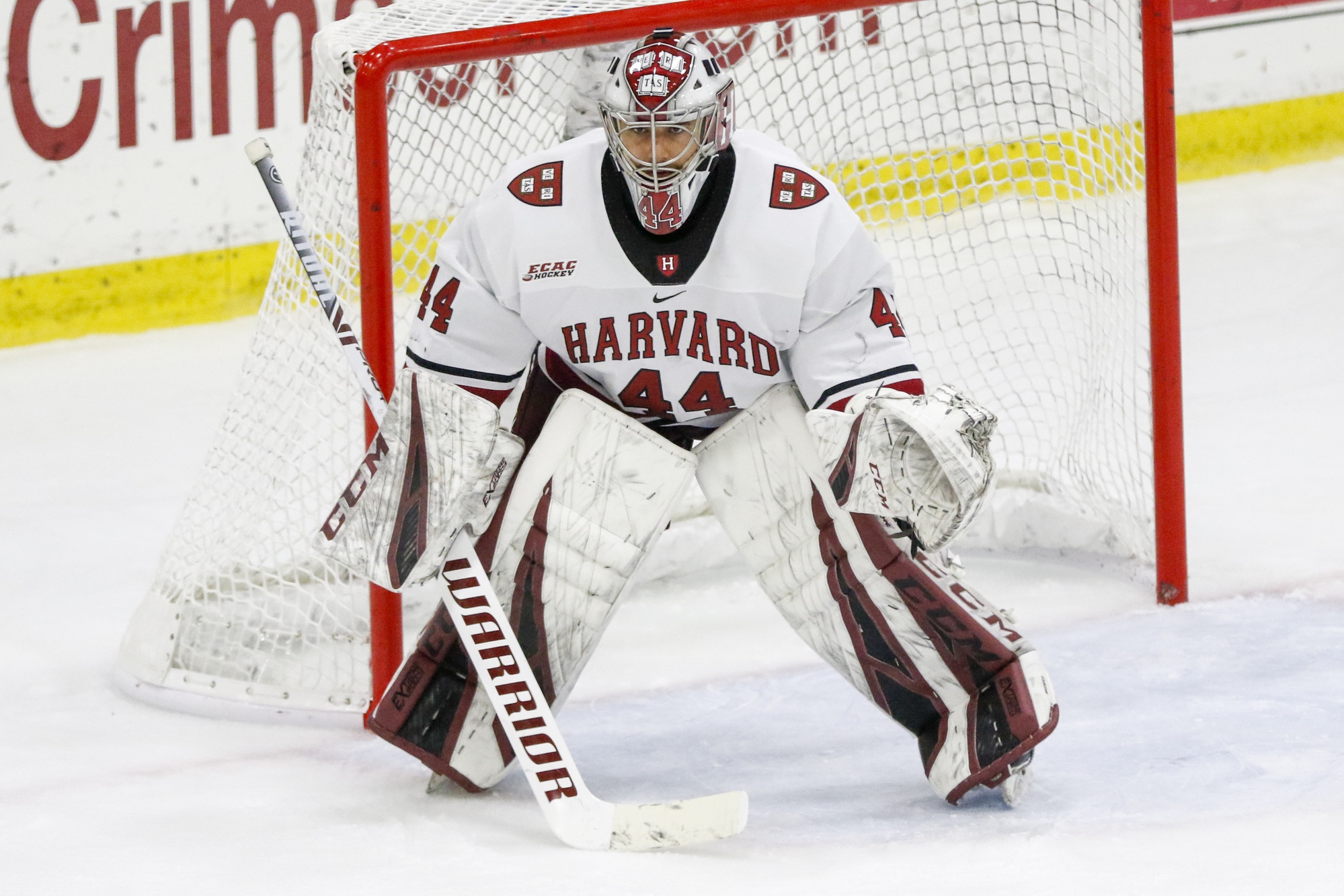 Gibson, who earlier this season was the best-performing net-minder in the country, turned in the first sub-.900 game of his collegiate career on Saturday (.857 SV%). By Timothy R. O'Meara

“We have to be hungrier around the net,” coach Donato said. “[If we] think we’re going to get a lot of pretty goals, it’s just not going to happen, and it’s only going to get tougher and tougher as we come down the stretch. We’re going to have to simplify our offense, get guys to the front of the net, get some rebounds. Right now, we haven’t done a good job of it.

The teams spent the first half of the third trading chances, until Raiders captain and forward Bobby McMann put the visitors ahead again. And again, the Crimson answered, as junior defenseman Reilly Walsh scored from the high slot to tie it up. As time ticked down it was clear this contest would be headed to sudden-death overtime. Just moments before the buzzer sounded, McMann was whistled for holding junior forward Henry Bowlby. Harvard would begin the extra hockey with two minutes of powerplay time.

But Colgate was up to the task, shutting down the Crimson’s man-advantage squad to supporters’ cheers. Harvard could not produce any particularly challenging chances; Farrier tended pucks ably and, with McMann out of the box, it was anybody’s game.

Despite the shift in momentum, the contest’s winner came about in a surprising play. Raiders forward Sharf collected the puck to the net-minder’s right and cut to the middle, swerving around Gibson to backhand the puck home. An attempt that could have been better defended — or defended at all — instead became the dagger.

“I’m just disappointed,” coach Donato said. When you battle as hard as we did and it wasn’t really going our way, but we get a powerplay in overtime...like the rest of the team, [I] was just frustrated and upset that we didn’t get it done.”

Though the Crimson’s ECAC hopes are by no means finished, the four-game losing skid points to several issues that have plagued the team all along — the difference being that to start the season, Harvard managed to win in spite of these problems.

It’s true that the team’s goaltenders have gone from lights-out, nation-leading numbers to ordinary. In the past four losses, senior Cameron Gornet and Gibson have together put up three sub-.900 performances. It’s also true that the losing skid has come against some talented squads. But the Crimson’s problems lie not just with who’s in net, nor with the quality of its opponents.

“I’m certainly not sitting here saying our goaltending is the difference between where we were at when we were winning versus the current losing streak,” coach Donato said. “But I think the real message is, we need to get better, be more consistent in all facets of the game… There’s not really any element of our game where we can say, hey, that’s at a point where we’re going to be able to have success at that level.”

If Harvard wants to return to its winning ways and prove that its early success wasn’t an outlier, it will have to find a solution before the season returns in full swing once again. That opportunity comes with a double-header against Arizona State in late December, in Irvine, Calif., and a return to conference play against Quinnipiac and Princeton in the new year.

“This taste is going to be stuck in our mouths for a while now, which is tough,” Krusko said. “I know we’ve learned a lot of lessons through this [half of the] season that we want to take with us for the rest of the year, but we’ve got a long way to go if we’re going to try and lift any trophies this year.”