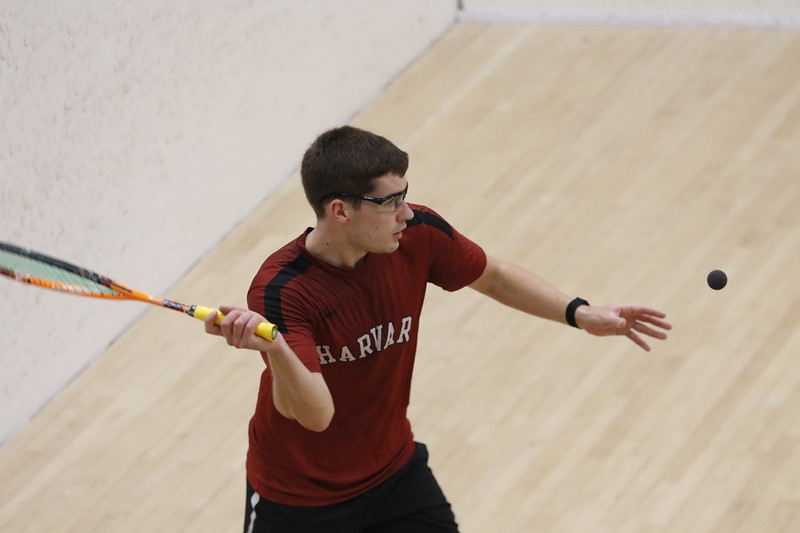 The Crimson men’s squash team ended its undefeated season with a dominant 9-0 win over Trinity in the National Championship to claim its 26th Potter Cup on Sunday. After losing to Trinity the past two years in the championship game, Harvard was finally able to avenge its previous defeats.

The Crimson’s strenuous weekend ultimately proved successful. It defeated Dartmouth 7-2 on Friday, Penn 8-1 on Saturday, and Trinity 9-0 on Sunday.

The team dominated the entire season, with its closest match being a 6-3 regular season victory over Penn. Sophomore Samuel Scherl and junior Timothy Brownell both attributed their dominance to a focus on “the little things.”

“We just worked hard this season and have been putting in the hours since September and we trained all over winter break so it was just about the little things,” commented Scherl. “There was a lot of talent, but talent doesn’t really go anywhere if you are not willing to put in the hard work. This season we had the combination of talent and hard work.”

“It’s all about the little things; they make such a huge difference in squash,” Brownell said. “We really took care of our bodies: eating well, sleeping well, hydrating. Everyone was really good at focusing on all of the little, kind of boring things that are easy to slack off on. I think that’s why in the end we were so good in the finals.”

Brownell has been on the team the past three seasons, and thus experienced the past two heartbreaking losses to Trinity in the Championship Finals. This team’s ability to obtain the title was especially satisfying for him.

“We’ve been here before, so it was really cool to be in my position, playing in the National Finals the last two years and coming up short,” Brownell explained. “So to be here again, feeling really confident in our abilities, it was just amazing and beyond cool to win today.”

The long journey began with the first match in mid-November. To maintain the dominance throughout the entire season takes determination and perseverance.

“I think a lot of it comes down to discipline,” Brownell said. “In the fall, it is harder to put in the work when the finals are so far away. This year we put in all the work and it really paid off later on.”

For Scherl, the weekend was about proving the team is deserving of the top spot.

“The regular season can be inconsequential because it really all comes down to Nationals where we got to show that we deserve the top spot,” Scherl said. “It was about unfinished business and avenging the losses from earlier and acknowledging the Harvard victory in the Harvard-Trinity rivalry.”

Though the team is used to high-intensity situations, the proximity to Trinity fans made the Championship venue at Yale all the more pressure-filled. Even though the Crimson was familiar with the finals pressure, the pregame routine was just as important as any regular season match.

“I need to separate and do some sprints away from the crowd and put the match out of my mind before I go on,” Scherl explained. “I get in the zone and just try to separate from the pressures because it can be very intense.”

The team thoroughly goes through all of its opponents’ strengths and weaknesses to solidify each court’s gameplan. For the final match against Trinity, a focus on complete dominance was key.

“We really wanted to come out with a 9-0 decisive win,” said Scherl. “Every match is a National Final match; there are no expendable matches… I think that speaks to the focus of the program.”

Marwan Tarek secured the win for Harvard in a five-game match against Thoboki Mohohlo, 9-11, 11-6, 9-11, 11-4, 11-4. The team stormed the court - respectfully, after Mohohlo exited - to celebrate the win. However, the Crimson remembered its original gameplan and recognized its job was not complete, even though the overall win was certain.

“Even once we had the win there was no let up of intensity; everyone was working just as hard because this is what we’ve trained for,” said Scherl, who was in the middle of his match when his team stormed Tarek’s court. “When it was already 8-0, our final player, George Crowne, beat his opponent in a game in which his opponent didn’t score any points, which is incredibly hard at this level of squash. I think that demonstrates what the goal of today was: to not only win, but win with a statement and vengeance.”