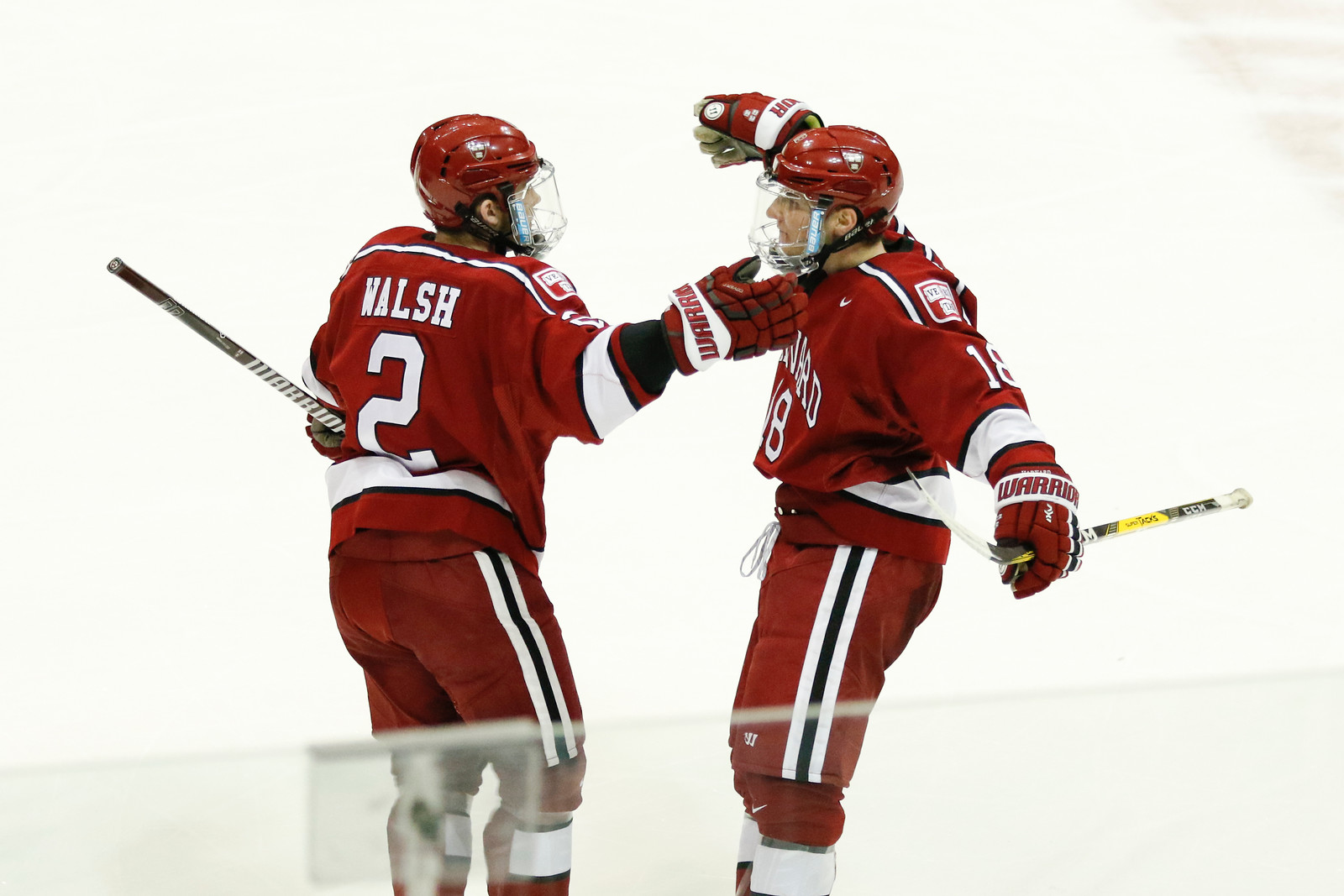 Lower-body injury, day-to-day. These aren’t the words any program wants to utter, especially when referring to its starting goalie in the home stretch of the regular season.

Alas, this was precisely the status of the Harvard men’s hockey team’s No. 1 net-minder, senior Michael Lackey, ahead of Friday’s tilt with ECAC foe Brown. The No. 17/15 Crimson turned to junior Cameron Gornet, hoping that the unforeseen change between the pipes would not derail the group’s surging play and hopes of an at-large bid to the NCAA Tournament.

Amid uncertainty in the crease, Harvard (15-8-3, 11-6-2 ECAC) nevertheless nabbed two crucial conference points in a 4-2 triumph over the Bears (10-11-5, 7-7-5). Gornet (2 GA, .933 SV%) did his part, posting his second career win and holding strong after ceding two goals in the first period, allowing the Crimson to seize the comeback victory.

“I think Cam Gornet stepped in and played really well,” Harvard coach Ted Donato ’91 said. “I think he looked calm, which isn’t easy to do, one, when you haven’t played a lot of hockey recently, and two, when you get a couple bad bounces early and you’re chasing the game…. He settled us in, he made some big saves.”

Two minutes into the third period, freshman defenseman Jack Rathbone skated the puck down from the point and around the cage before firing a shot toward Brown goaltender Luke Kania (4 GA, .892 SV%). Junior forward Nathan Krusko tipped the puck on its way across the goal line, registering his first point since Jan. 26 on the eventual game-winner in Friday’s Ivy League clash.

“Nathan Krusko has been doing a lot of the right things for us,” coach Donato lauded. “It was nice to see him get rewarded because he’s had some tough luck, but we know he’s capable of scoring some big goals for us.”

Junior defenseman John Marino cushioned Harvard’s advantage in the final minutes of play, ripping a one-timer off Kania’s inside crossbar, courtesy of a cross-ice feed from junior forward Frédéric Grégoire.

Notably, both teams lost a player in the second period. Seven minutes into the stanza, the officials stopped play and retroactively assessed Harvard freshman Wyllum Deveaux a game disqualification for illegal head contact. The Crimson killed Brown’s ensuing five-minute powerplay and, before long, was awarded one of its own.

The Crimson’s nation-best powerplay, 31.8 percent effective entering Friday’s affair, went to work on a 5-on-3, which culminated in a scorching one-timer goal from sophomore defenseman Reilly Walsh.

The clap bomb was Walsh’s seventh extra-man snipe of the season, good for a team-high. It also ended an uncharacteristic scoring drought for the Harvard man advantage: the powerplay unit had not hit pay dirt since Feb. 8, when it recorded four man-up goals against a ranked Union squad.

“Obviously it’s in the back of our heads that we had been struggling the past two games,” Walsh said. “Our powerplay being consistent as it has been, that’s something that we don’t like to do. When we got the opportunity 5-on-3, we felt very confident in ourselves to spark us.” 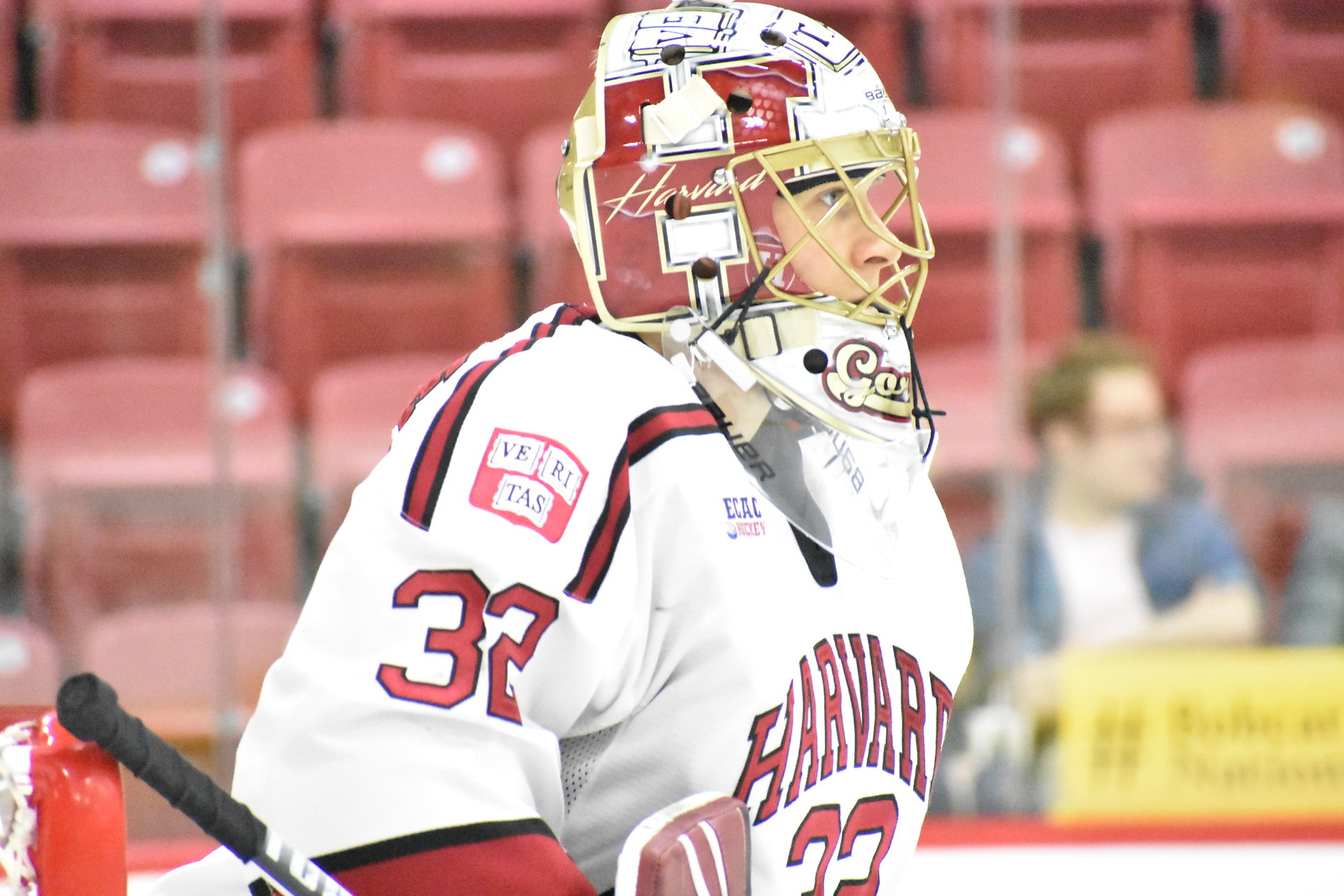 With senior starter Michael Lackey on the shelf due to a lower-body injury, junior Cam Gornet stepped up and made 28 saves in his first win of the season. By Amanda M. DiMartini

Harvard’s lethal powerplay usually grabs the headlines, but it was the Bears who took a two-goal lead into the first intermission courtesy of their own man-up unit.

Brown opened the scoring 11 minutes into the first frame. Bears co-captain Tommy Marchin, who logged a pair of helpers on Friday, kept play alive in his offensive zone and dished to blue-liner Zach Giuttari near the point. The junior defenseman fired a wrist shot through a screen and beat Gornet, sending a loud ping through the concourse of the Bright-Landry Hockey Center in the process.

Following this first powerplay conversion, sophomore forward Chris Berger picked up a rebound from classmate and point man Tony Stillwell, bulging the twine and inking his fifth goal in as many games. The Brown lead, however, would prove to be fleeting.

“We have to get back to the 60-minute effort and being intelligent, and quite honestly not just giving the game to the opposition on a platter,” lamented Bears coach Brendan Whittet after the game.

Zerter-Gossage set the tone in the middle frame with a pivotal early goal. Less than three minutes after play resumed in the second, the senior punched home a net-front feed from freshman forward Baker Shore.

“We had a good start, but we took a penalty, we had a couple turnovers before that…and they executed,” coach Donato said. “I think we hit three posts in the first, and we probably had seven or eight grade-A scoring chances, so we weren’t too down.”

Zerter-Gossage continues to lead the Crimson in goals with 15, and the momentum-shifting tally on Friday is just one of numerous instances of the Montréal, Qué., native using his knack for scoring to turn the tide at crucial points in games.

“That first goal, we loosened the grips a little bit on the sticks,” coach Donato said. “Lewis has stepped up and scored some big goals when the team has needed them, and that’s a sign of a good leader and a very good player.”

With a pair of conference points in the bag, Harvard turns its attention to Saturday night’s battle with storied rival Yale in search of a four-point weekend even without its go-to man behind the mask. Lackey’s status is doubtful for Saturday night, so Gornet will have a chance to build on Friday’s performance as the Crimson continue to contend for the Cleary Cup, the ECAC regular-season crown.