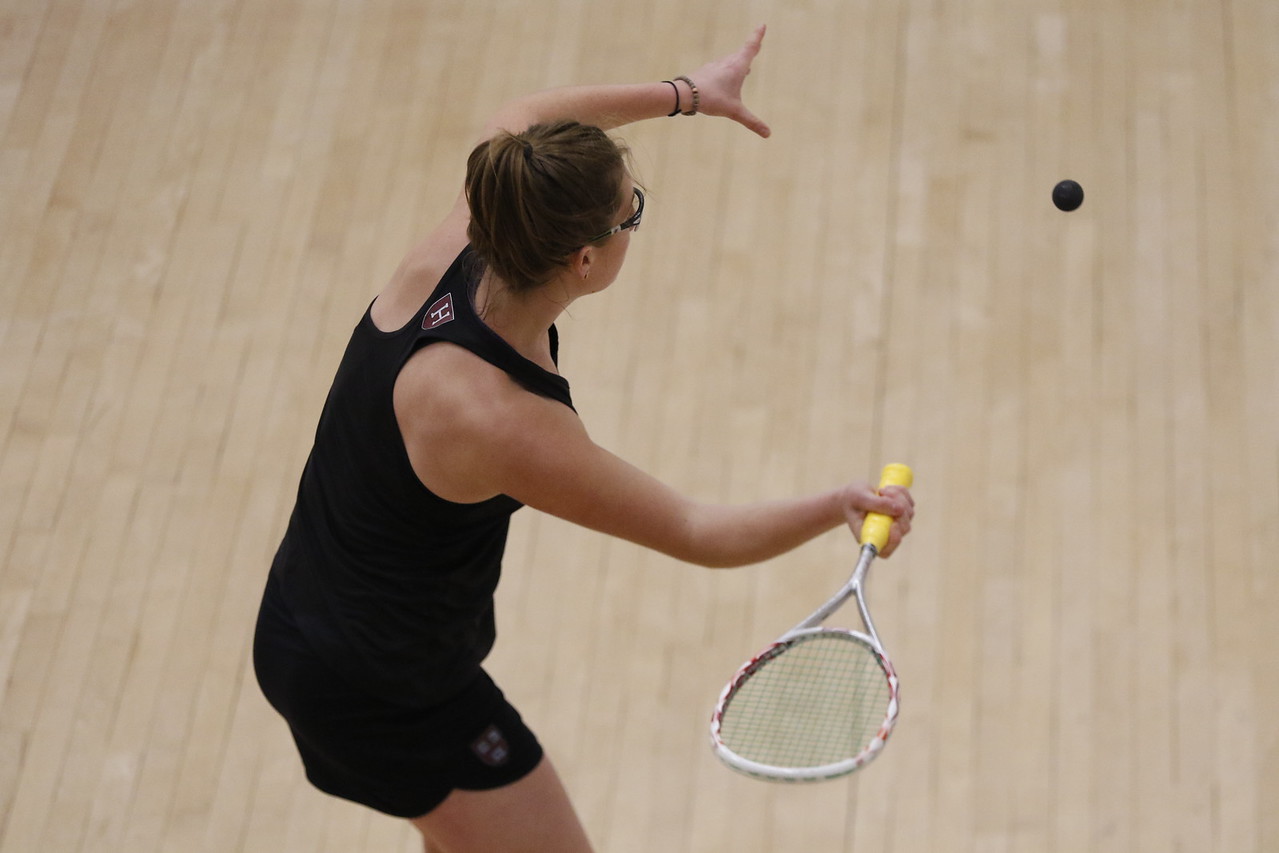 The Crimson ended its historic perfect season this past weekend, taking home their fifth-consecutive Howe Cup and extending their winning streak to 65 games. By Timothy R. O'Meara
By Lucy Connor, Crimson Staff Writer

The Harvard women’s squash team finished its historic season over the weekend in the national Championship with yet another shutout 9-0 win. The Crimson swept No. 3 Trinity for its fifth-consecutive Howe Cup. Though the team has obviously retained an impressive level of squash excellence, this season was even more remarkable than the previous four, as every single player on the team went undefeated.

“We just never wanted to let up,” senior Sabrina Sobhy said. “We started winning 9-0 every match and then two-thirds into the season we thought, ‘wow do you realize nobody has lost a match yet?’”

This inevitably created high pressure for the players heading into the championship weekend.

“There’s no need to add any pressure and no one really spoke about it, but our undefeated streak just kept adding self-pressure because nobody wanted to be the one to break it,” Sobhy continued. “We added a lot of pressure on ourselves [this weekend], but the way we executed and the way we took the pressure and calmed ourselves down and changed our mindset proved successful in the end.”

Sobhy was one of two matches that went to four games. She lost the first game to Trinity’s Luz Sarahi Lopez Dominguez 11-6. However, she refused to be the one player to break the perfect season; Sobhy rebounded and fought back to win the next three games, 11-3, 11-3, and 11-8, respectively.

“Honestly, I just wanted to enjoy it especially because it was my last team national Championship,” Sobhy explained. “I really just love this team so much; I wanted to play my best for them.”

The only other match to go to four games was on the third court, where Harvard junior Amelia Henley was competing against Trinity junior Salma Alam El Din. The match was incredibly intense, as Henley lost the first game 11-5 amidst controversial rulings. Similar to Sobhy, the competitive mindset set in, and Amelia recovered, winning the following three games 13-11, 11-9, and 11-8.

Henley’s impressive win was a huge moment of the weekend for her junior teammate Gina Kennedy, even though Kennedy won her own match, 11-4, 12-10, and 11-5.

“Amelia Henley was on right before me and she had a really tight match,” recounted Kennedy. “I just remember watching that game and being really nervous because I was about to go on, but she pulled out a really good win, so I think that was the highlight of my weekend.”

Though the team only needed to win five courts every match to extend its 65-game winning streak, the Crimson refused to let up a single game this entire season, winning all 117 individual matches played. Even if the Howe Cup might have been an expectation for this dominant team, the national championship win was special for each and every Harvard player.

“This one feels different because none of our players have lost once this year,” said Kennedy. “In my past couple of years it’s been super exciting, but this year, after Sabrina won the last match and when we realized we had the actual perfect season, it was so awesome to be able to celebrate everyone’s wins.”

Despite the team’s impressive dominance over the past half-decade, it somehow managed to improve this season. Sobhy and Kennedy both attributed this team’s excellence to the team dynamic.

“Everyone is always early to practice, not because we’re told to be early, but just because that’s the nature of our team,” said Kennedy, offering an example of the team dynamic.
“Squash is such a priority for everyone; it’s not just an additional thing, it’s a part of who we are. We are just all dedicated and self-motivated.”

“Everybody has always been supportive no matter what and that adds extra motivation behind each match,” explained Sobhy. “We’re not playing to win only for ourselves; we’re putting in the extra effort for our teammates.”

Though squash is a sport of individual matches and mindsets, this season’s unprecedented success came about through the emphasis on winning for the team.