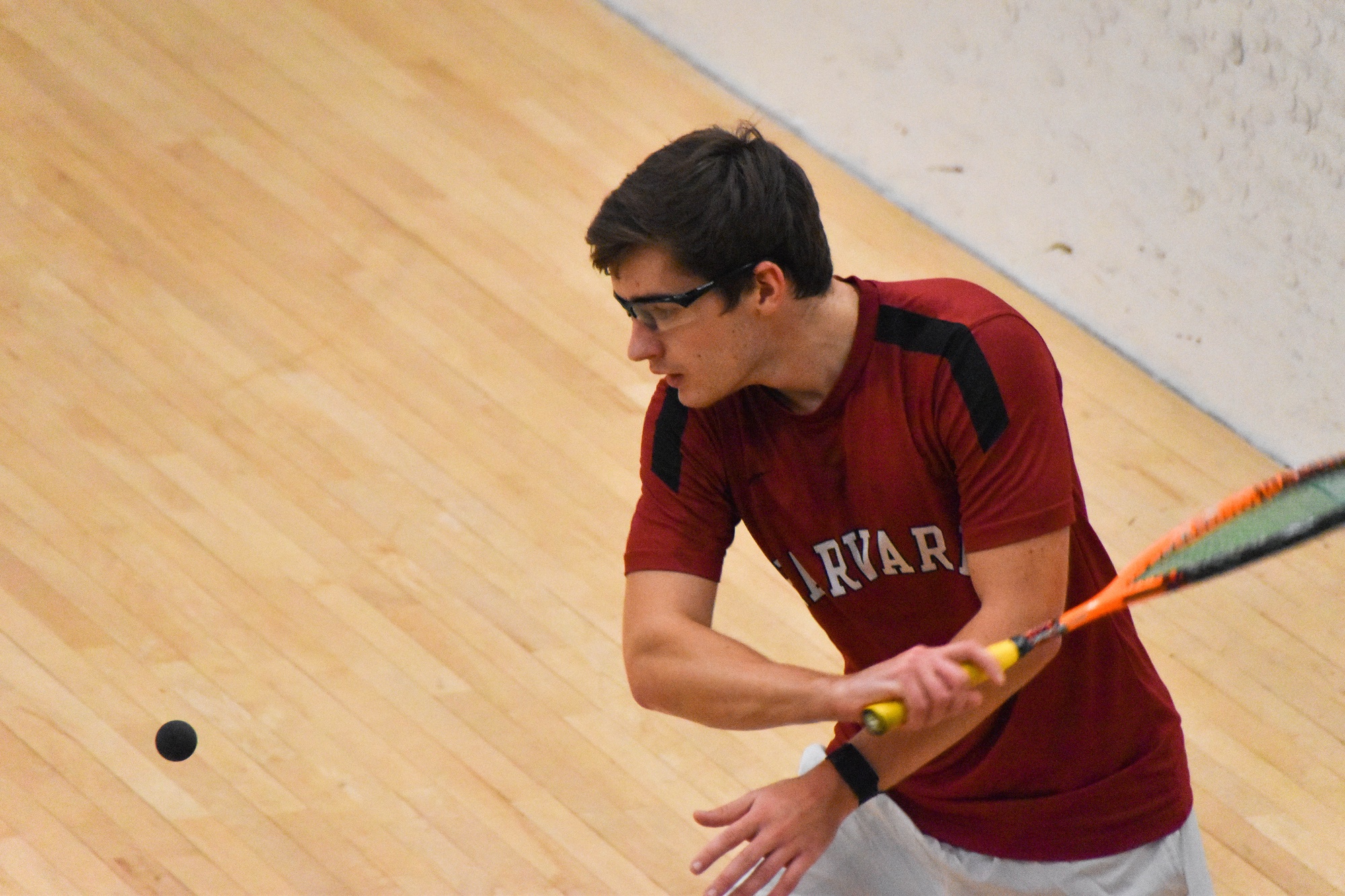 The score is 10-4 in the third game of a hard fought match between Harvard freshman Marwan Tarek and Trinity senior Tom De Mulder. After a long rally, Tarek chips a cross-court drop shot that just evades De Mulder’s outstretched racket, claiming a 11-6, 11-5, 11-4 victory.

This performance was emblematic of the No. 1 Harvard’s (11-0, 5-0 Ivy) as a whole, as the team took eight matches to the No. 2 Trinity College Bantams’ (14-2) one in the most significant matchup of their season. This victory preserved their number one position in the standings.

“Trinity is one of the biggest teams in college squash,” said Tarek, the owner of an individual undefeated season. “We haven’t won against them since 2014, so we knew that this was a big day.”

As such, the team put a little extra consideration into their preparation in the days before the match.

“I have to give Coach all the credit,” said Tarek, a Cairo, Egypt native. “He makes sure that we prepare for every single match, taking on all opponents equally, but for Trinity’s match we had some additional morning meetings to motivate each other. We really mentally prepared for this match.”

Tarek’s match in the No. 2 position was quite well-contested, but he was able to pull away from his opponent in each game after the first few points went back-and-forth. He attributed this performance to the mental preparation that the Crimson squad engaged in.

“The mental side is a big part of my game,” he offered. “In every single point, I have to believe that I am going to win the point, even if it is 50 or more rallies long. I have this belief that I am going to get out of this point as the winner, that I want to end this point in my favor.”

As for the rest of the team, freshman Victor Crouin defeated Trinity junior Kush Kumar 11-5, 11-4, 11-4 in the No. 1 position, and junior Timothy Brownell rounded out Harvard’s top three with a 11-9, 12-10, 11-5 victory against Trinity junior Thoboki Mohohlo. The remainder of the Crimson’s top six — sophomore Samuel Scherl, and juniors Saadeldin Abouaish and Sean Hughes — finished their matches in three games as well.

Beyond their performances on the court, Tarek noted that the upperclassmen played a role in calming the nerves of the younger players.

“The upperclassmen had a big role in teaching us freshmen how to take the pressure off,” noted the two-time Egyptian National Champion. “We have three freshmen playing in the top nine, so the upperclassmen were always encouraging us to play our best and fight, regardless of the outcome of the game. You can’t find a great team without people who always have each other’s backs.”

On the women’s side, No. 1 Harvard (8-0, 5-0 Ivy) put up an equally dominant performance, if not more so. The team swept No. 3 Trinity’s squad (12-2), taking all nine matches and maintaining their top spot in the rankings.

“It went pretty well today,” said sophomore Hannah Craig, who won her match 11-5, 11-7, 11-6 in the No. 9 slot. “We were prepared going in, and we fought really hard. We never underestimate the Trinity team because they are always very strong.”

Going into the matchup, the team knew that they were in for tough competition, and used this for added motivation.

“We always embrace the challenge,” said Craig, a Belfast, Northern Ireland native. “What’s fun about playing Trinity is that they’re always strong players. It’s always an exciting match for us.”

Craig’s opponent was an aggressive player, so over the course of the match, she had to display patience and resilience.

“She was an Egyptian squash player, so she would put a lot of pace on the ball,” Craig said. “She was hustling and trying to step up and volley a lot. For me, it was about hitting straight lines, hitting under a lot of pressure, varying the pace of the ball, and being patient. I let her take the crazy shots and stayed calm while waiting for my opportunities.”

Craig, like Tarek, also cited the mental game as a factor that impacted the performance of the Crimson’s players against the Bantams.

“There were a lot of clashes during the matches, because squash is so one-on-one that you’re always up in each other’s faces,” she offered. “What was important was staying strong in those moments — keeping focused, taking breaths, and continuing to fight. We’ve been working on mental strength.”

Both teams will face Yale at home on Thursday before heading to Providence to take on Brown on Sunday.