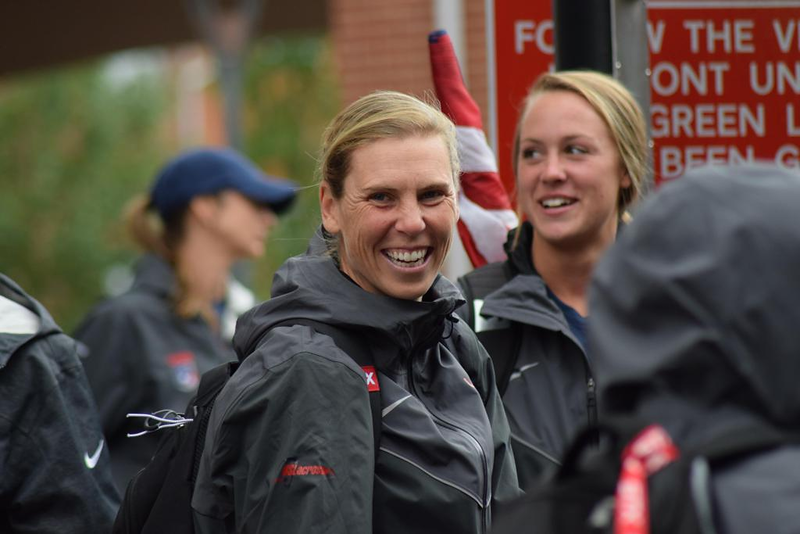 First-year Devon Wills prepares to lead the women's lacrosse team to a winning campaign in her first season. By Courtesy of Devon Wills
By Ben Stern, Crimson Staff Writer

I enter the Murr Center’s women’s lacrosse office for an interview with new Carole Kleinfelder Head Coach for Harvard Women's Lacrosse Devon Wills, and I am unimpressed with the decor. It is carpeted and clean but gray and rather dark, with a pipe exposed on the wall. It is reminiscent of the average dorm room here: an unremarkable space for a remarkable person.

Wills sits back in her chair with an inviting smile. She is well-settled into her new home, as the office’s nondescript walls have been adorned with action shots and accolades. The Colorado native looks poised, ready to take on the challenge of leading the Crimson to the top of the standings in her rookie campaign. Harvard finished 6-9 (2-5 Ivy) last year, unable to to put together a winning streak of two or more consecutive games.

Her lacrosse pedigree is certainly impressive. She joined the U.S. national team in 2007 and quickly cemented her place as one of the best American goalies in recent memory.

As captain in 2017, she led the squad to gold medals in the Federation of International Lacrosse World Cup and the International World Games (While lacrosse is currently not an Olympic sport, there has been a concerted but as yet unsuccessful push in recent years to add it to the slate).

She was involved in the creation of the Women’s Professional Lacrosse League and previously played in its predecessor of sorts, the United Women’s Lacrosse League.

Wills comes to Cambridge from the University of Southern California, where she was a talented defensive and recruiting coordinator.

However, Wills is no stranger to Ivy League lacrosse. The three-time All-American standout at Dartmouth College led the Big Green to the NCAA championship game in 2006. In that season, she boasted the lowest goals-against average in the nation and held captain’s honors.

She identifies the overall student culture among the Ancient Eight as an important feature of this post for her.

“I always had an appreciation for how successful the programs are and how successful the league is, given the differences and time constraints that they have compared to the rest of the college realm,” Wills said. “There’s something to be said for choosing an Ivy League school, that you’re really showing a commitment to your character and a commitment to your personal growth off the field. That’s something that drew me back. I wanted to work with players who had that in mind in addition to prioritizing athletics.”

After graduating from Dartmouth with a degree in sociology, she joined the Big Green’s coaching staff as an assistant before heading back to her home state to be an assistant at the University of Denver.

With all of that experience under her belt, Wills is considered a real catch in the college sporting world.

“We are thrilled to welcome Devon as our new head women's lacrosse coach,” said Bob Scalise, John D. Nichols '53 Family Director of Athletics. “Devon is widely known as an outstanding coach and mentor, and she returns to the Ivy League after making a tremendous impact at USC. One of the greats in the history of women's lacrosse, Devon brings a winning pedigree to Cambridge and we look forward to her continued success here at Harvard.”

Wills also brings to Boston a unique skill set with respect to recruiting. She is from the Mountain West, played in New England, and coached for the better part of a decade on the West Coast.

“It’s been able to give me a broader perspective on recruiting so that we’re not closing the doors to, you know, potential recruits from far away,” Wills said. “Whether its California, Minnesota, Chicago, Florida, I don’t really care where you’re from. If you’re academically qualified to come here and you’re a good lacrosse player, then we absolutely want to give you a look.”

It is snowing outside as she speaks, another chilly Boston afternoon in the middle of the long winter. Her old stomping grounds in SoCal are likely grinning with dewy sunshine right now. It is no wonder the Crimson can have trouble attracting talent from thousands of miles away.

The conversation turns to the upcoming season. Wills knows her honeymoon won’t last long, that she will be judged soon enough not by her successes in settings past, but by how she fares inside the Harvard Stadium. She expects continual ups and downs to the season.

“At first, in the fall, we were just trying to get our bearings and get a grasp on what everybody’s strengths were,” Wills said. “And now that we’re really into preseason practice, we’re kind of getting more in depth concepts and everything. It is a lot of teaching. I think everybody’s kind of new to the system, which is taking more time that I think it probably would if they were used to it. But it’s always the same focus, you know, that everybody just needs to get better.”

It will be an uphill climb for Wills' squad this year. Princeton and Penn both suffered only one loss last spring, and Harvard was mired in a logjam of two- and three-win teams at the bottom of the standings. Wills wants to emphasize playing the right way over simply gunning for as many wins as possible immediately.

“We’re trying to keep an eye on process-based goals,” Wills said. “Just trying to get better each practice, learning from the previous practice, learning from the previous game. We’re focusing on growth. So rather than saying like, Oh, we want to win X number of games or we want to win this title or that title or have Y number of All-Americans, I think right now we want to make sure we’re getting better each day.”

She smiles and shakes my hand while an assistant calls with a question from the adjacent room. Wills’s reputation got her here, but she is all business now. A long, challenging season looms, and Wills and her captains have work to do.

As I exit the Murr Center, one thing becomes apparent: she deserves a bigger office.

—Staff writer Ben Stern can be reached at ben.stern@thecrimson.com.