Men's Lacrosse has gotten off to a slow start this season, and will be looking to match last year's heights.
By Ben Morris 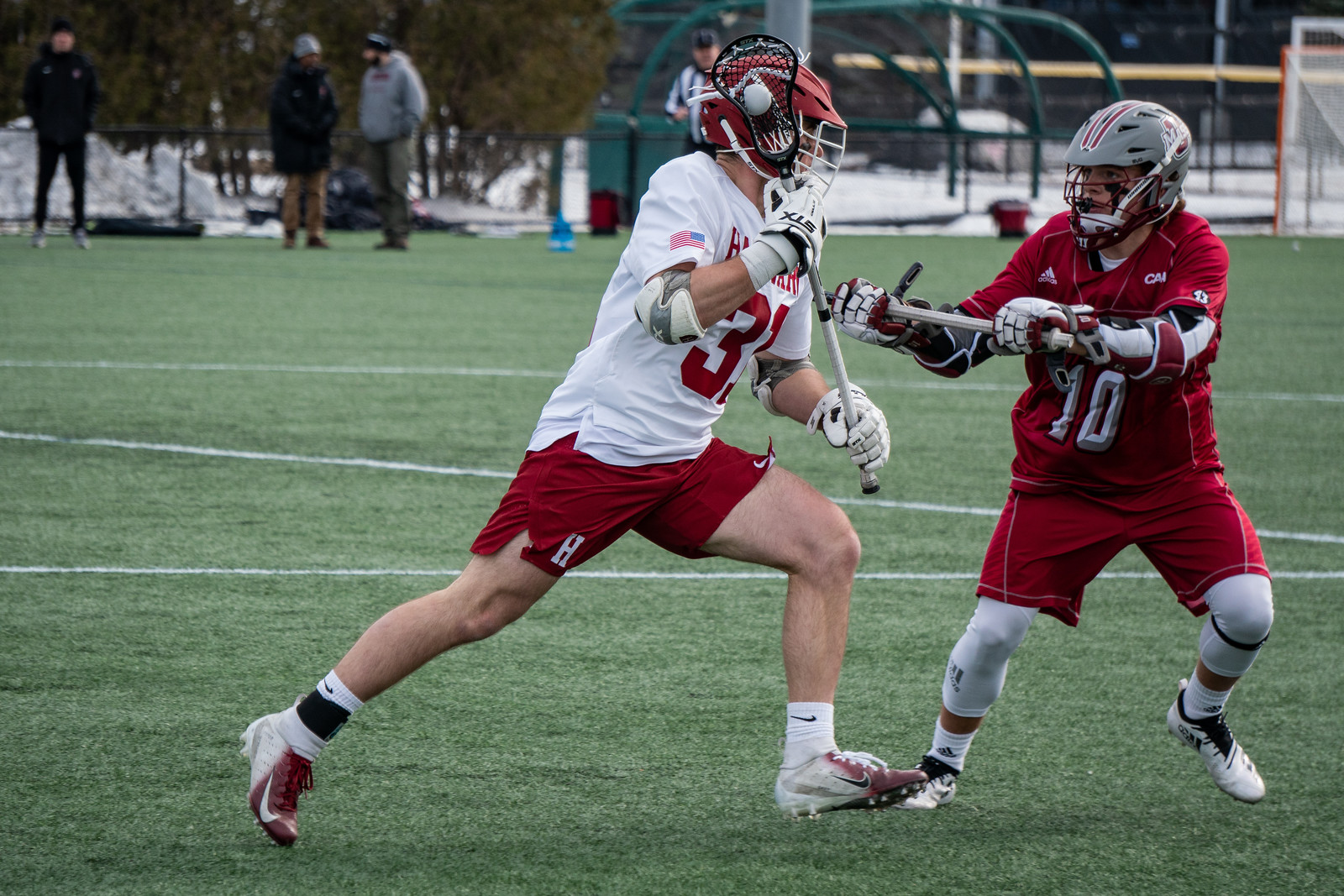 As the winter winds begin to cool down, the much calmer spring breeze begins to take its place. The sun comes out, flowers start to bud, and birds begin to sing. Yet, spring would not be complete without its most important feature: lacrosse.

The Crimson is looking forward to having a bounce back season this year. In 2018, despite getting off to a great 7-1 start, the team struggled in the second half of the campaign, losing the final six games to finish 7-6 on the year. The team also has to deal with major departures from last season, as it graduated 16 seniors including Morgan Cheek ‘18, who led the team in assists (34) and total overall points (59), as well as starting goalie Robert Shaw ‘18.

However, the team is in no way letting that get to them, and is looking to come out and make a statement in 2019. Led by senior defenseman Jonathan Butler, junior attackman Kyle Anderson, and senior defenseman Spencer Danie, the Crimson feel ready to take on any team it faces this season. The team felt that heading into this year, the aggression needed to be taken to a new level.

“Our main focus is to fuel competition in everything we do,” Anderson said.

The 2019 season has not began the way the team was hoping for, but there is still plenty of time to turn it around. In its first matchup, on Feb. 16, the Crimson traveled to Chapel Hill to take on No. 12/14 North Carolina. Despite hanging with the Tar Heels for most of the game, Harvard ended up falling 16-11.

A week later, Harvard hosted the University of Massachusetts for its home opener. Once again, the Crimson played a solid game, but a quick fourth quarter goal spree in which UMass netted three goals in a minute and 26 second allowed the in-state rival to pick up a 12-9 win.

Three days later, the Crimson took on Holy Cross in a game that got moved from Worcester to Cambridge at the last minute. Harvard was able to get out to a commanding 10-3 lead, but struggled to keep the momentum going, as Holy Cross brought the game all the way back and ended up winning 11-10 in double overtime.

Despite the rough start, the season has had a few bright spots. On the onset of the season, Butler and sophomore midfielder Jack Frisoli were named to the NEILA All-New England Preseason Second Team. In addition, freshman attackman Austin Madronic, who has six goals on the year, was named Ivy League Rookie of the Week after the first matchup against UNC.

“It's an honor to win Ivy League Rookie of the Week, especially in my first college game,” Madronic said. “However, as a team, we didn't end up with the outcome we wanted and we have a lot of work to do, but I know we're up for a challenge.”

Heading into March, Harvard will be entering the month in which it feasted last year, going 5-1 against a collection of Ivy League and local opponents. These games included tight wins against Brown, Dartmouth, and an OT thriller against local rival Boston University. Harvard will have the same slate of opponent this year, with a home tilt Saturday the 9th against Providence (2-2) and a home game near the end of March against last year’s No. 1/1 ranked team Albany (1-1) to end the mouth.

The conclusion of the season will be the toughest competition to date for the Crimson squad. It will face No. 3/3 ranked Cornell (2-0) at home on the 6th of November and Penn (0-2) the following Saturday at home. Against both teams last year the team battled to the buzzer, losing as talented Cornell and Penn teams pulled away late. The Crimson will finish its season with a bout away against Princeton (1-1) and a home clash against a No. 4/4 ranked Yale (1-1) team that won the national championship last year. This year, Harvard will hope to capitalize on its opportunities against quality opponents in tight games.

Despite the tough beginning, the Crimson has many chances to take down some of the best teams in the nation. The team is hungry to get its season back on track, starting this Saturday away against Hartford (0-3).