As the Crimson journeys into the 2019 softball season, high hopes and steep expectations are certainly coming along for the ride. After taking home its seventh Ivy League softball title under last year’s senior class, the group will look to replicate the feat.
By Mohamed Ahmed and James Joyce 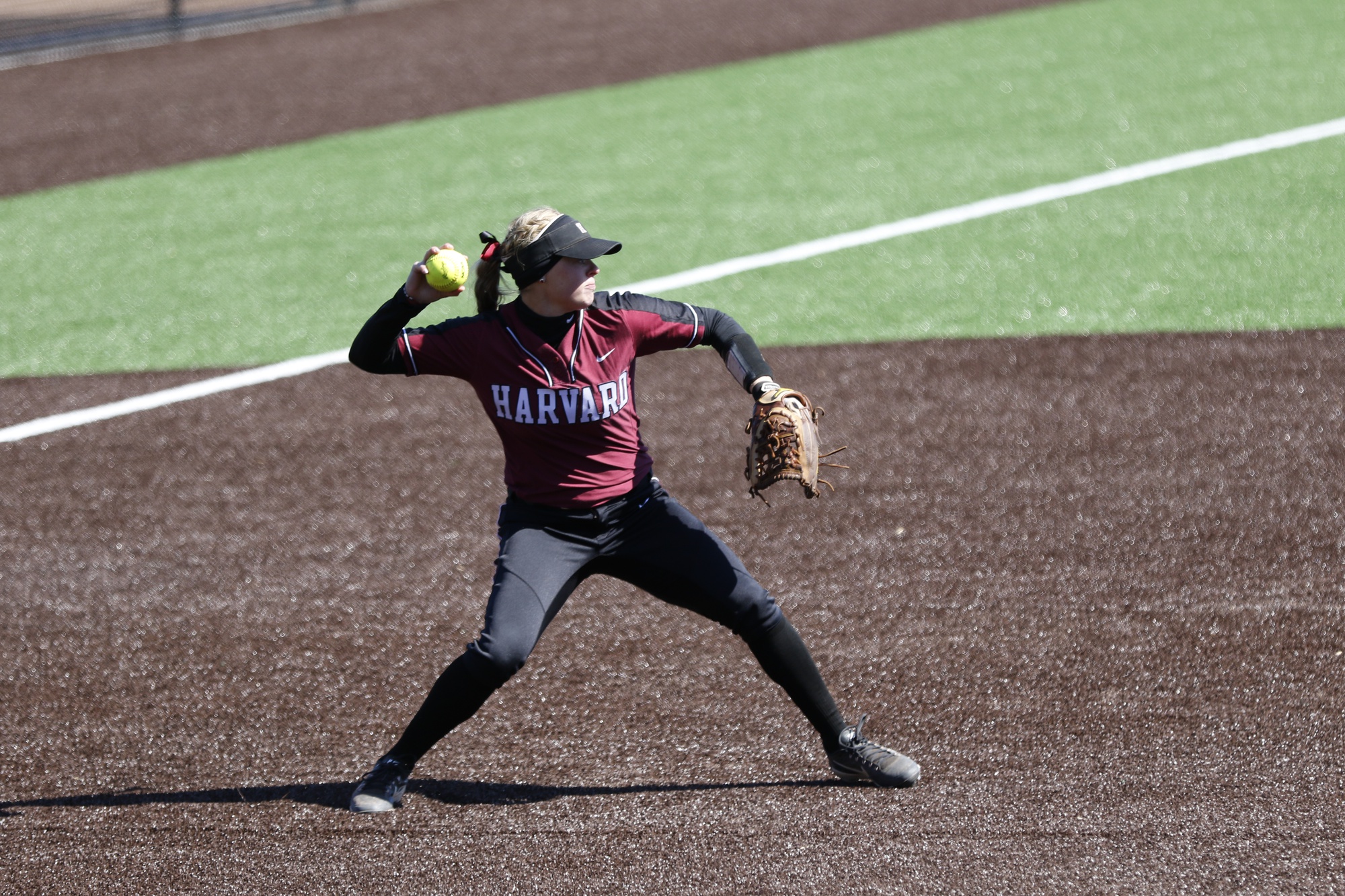 Kaitlyn Schiffhauer is no stranger to fours. Back when she donned blue and white for the Palo Alto High School Eagles, she soared to the top of her class as a four-time varsity softball letterwinner. Last April, she registered a four-game hitting streak, her longest collegiate hit surplus. And now, as a Harvard senior, the captain for the Crimson is just over halfway through her fourth year at the College. Thus, it should come as no shock that she summed up her goals for the Harvard softball team in four words: Respect. Passion. Fortitude. Confidence.

As the Crimson journeys into the 2019 softball season, high hopes and steep expectations are certainly coming along for the ride. After sweeping Dartmouth in a two-game series last May, Harvard took home its seventh Ivy League softball title under last year’s senior class, a group that Schiffhauer described as essential to the Crimson’s victory.

“Last year’s senior class was a tremendous example of leadership,” Schiffhauer said. “They held up high standards of Harvard softball, so I learned a lot from them.”

This season, the Crimson softball team hopes to replicate the success of last year’s leadership. Pitcher and infielder Katie Duncan, the squad’s newest captain, regards her predecessors as epitomes of camaraderie.

“In terms of making an impression on the freshman, I just want to continue the idea that the seniors implemented last year,” Duncan said. “They really [focused on] supporting one another as a community and to really be a family on and off the field.”

Maintaining the team’s drive over the course of the entire softball season is no easy task for Harvard’s captains. With training beginning at the start of the academic year and championship games not being played until early May, the softball season is one of the NCAA’s longest.

“We definitely have a very long season,” Duncan said. “But the seniors last year did a phenomenal job of inspiring everyone to love the game of softball, and I think they all really radiated positivity and made everyone excited to always be there.”

Of course, with a drawn-out season inevitably comes injuries, an occurrence that last year’s softball squad was no stranger to. This season, however, the Crimson are aiming to balance practice with prudence.

“Last year was really hard because we went through a lot of injuries,” Schiffhauer said. “This season, we’re doing a really good job of managing our injuries and taking care of ourselves, of having high expectations but also knowing when to pull back.”

No matter the struggles that last year’s team faced, the women in crimson are ready to take this season by the horns. Both captains characterize the incoming freshman class as “eager to give 100%” to a team with which they are quickly becoming integrated.

“At the end of the day, I go back and know that my senior class and Katie are supporting me,” said Schiffhauer. “No matter what, the whole team and coaching staff are always behind me.”

As the Crimson squad look toward the upcoming season with hope and excitement, this past weekend’s games served as a litmus test for where they currently stand so far this season.

“This weekend it was great to be on field, on dirt,” Coach Jenny Allard said. “Playing outside, getting our feet under us, getting competitive.” 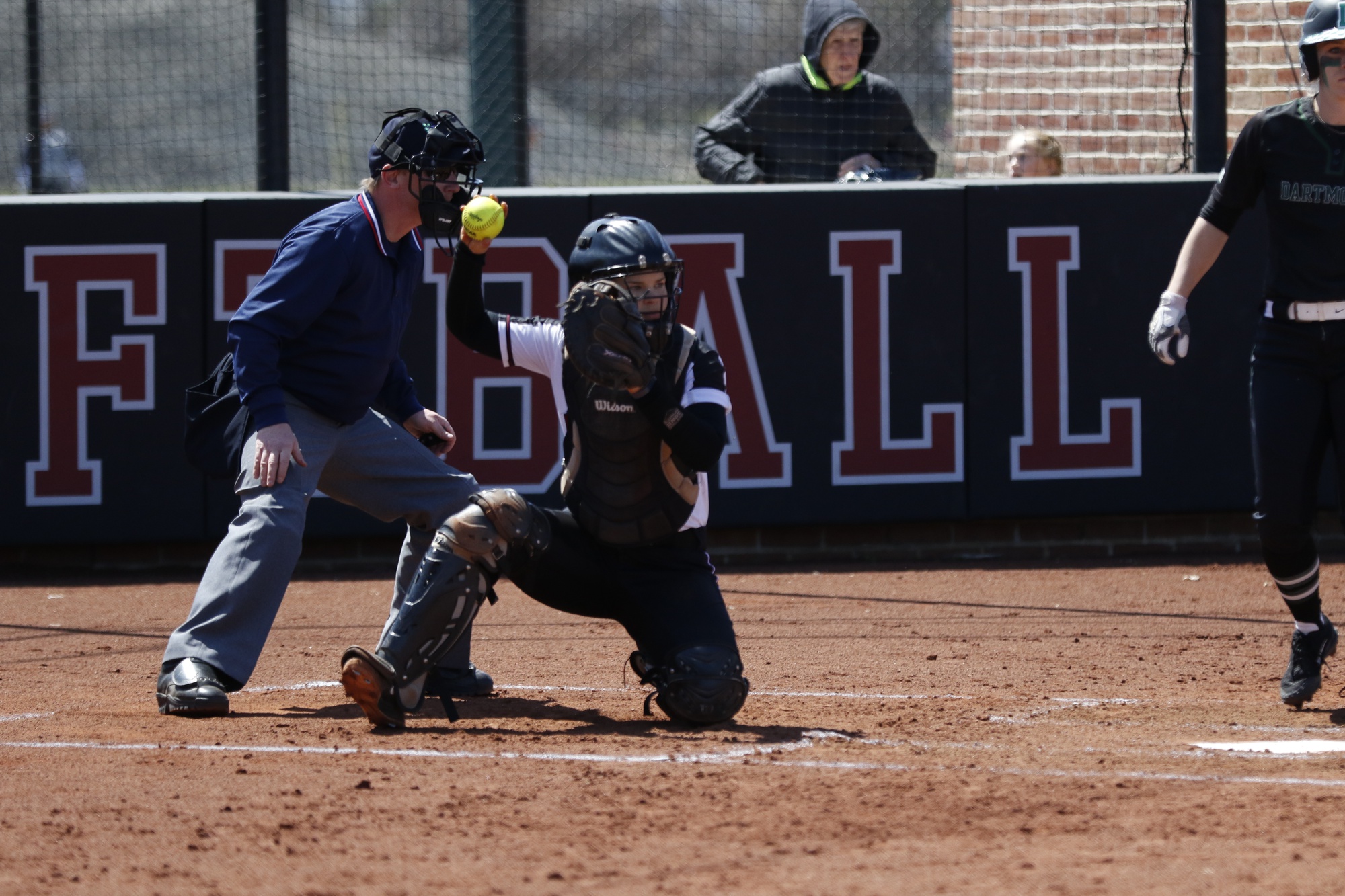 Junior catcher Lindey Knieb tosses the ball back to the pitcher against Dartmouth last April. By Timothy R. O'Meara

The Crimson traveled to the sunshine state to participate in the Jacksonville Classic where they first faced LIU-Brooklyn, followed by back-to-back games against Delaware and Jacksonville.

“We have been in a bubble for the past month, there has not been a lot of sunlight” Schiffhauer said. “Seeing that yellow ball is so exciting, so are the moments you live for and the whole team plays for.”

Harvard lost its season opener against the Blackbirds, falling 2-0, before playing the Dolphins and the Blue Hens twice, coming out of both series even against with a win and loss apiece.

“Coming home 2-3 against a line-up of some very tough teams, we are pleased overall with the experience that we got,” Allard said. “There is a lot to build on and a lot of things we will address this week in practice, before we head to Washington, D.C. next weekend.”

The Crimson’s upcoming game schedule is jam packed with road games, with the Harvard squad not playing their first home game until late March against the Brown Bears.

“We do a lot of mental game work,” Allard said. “We are very organized and very structured against how we travel as a team. We make being on the road something that we are good at.”

Last year during the NCAA Regional tournament, the Crimson lost to then-ranked No. 7 Georgia, by a score of 6-2. Afterwards, the Crimson faced the Golden Bears in a win or go home situation and were unable to contain California’s dominant offense, resulting in Harvard’s elimination.

“The goal of any Division 1, 2, or 3 team is to play in the NCAA tournament,” Allard said. “We were excited about the opportunity and we trained hard to be at that regional.”

While looking to replicate last year’s success and qualify for the NCAA regional tournament, this year’s squad has the additional benefit of improving on last year’s performance, with the ultimate goal of bringing Harvard to the next level of collegiate softball.

“The thing we need to continue to play at is a level where the speed of the game is faster,” Allard said. “At that level it is just a little more faster and once you get to the playoffs you have the very best teams competing.”

—Staff writer Mohamed Ahmed can be reached at mohamed.ahmed@thecrimson.com.