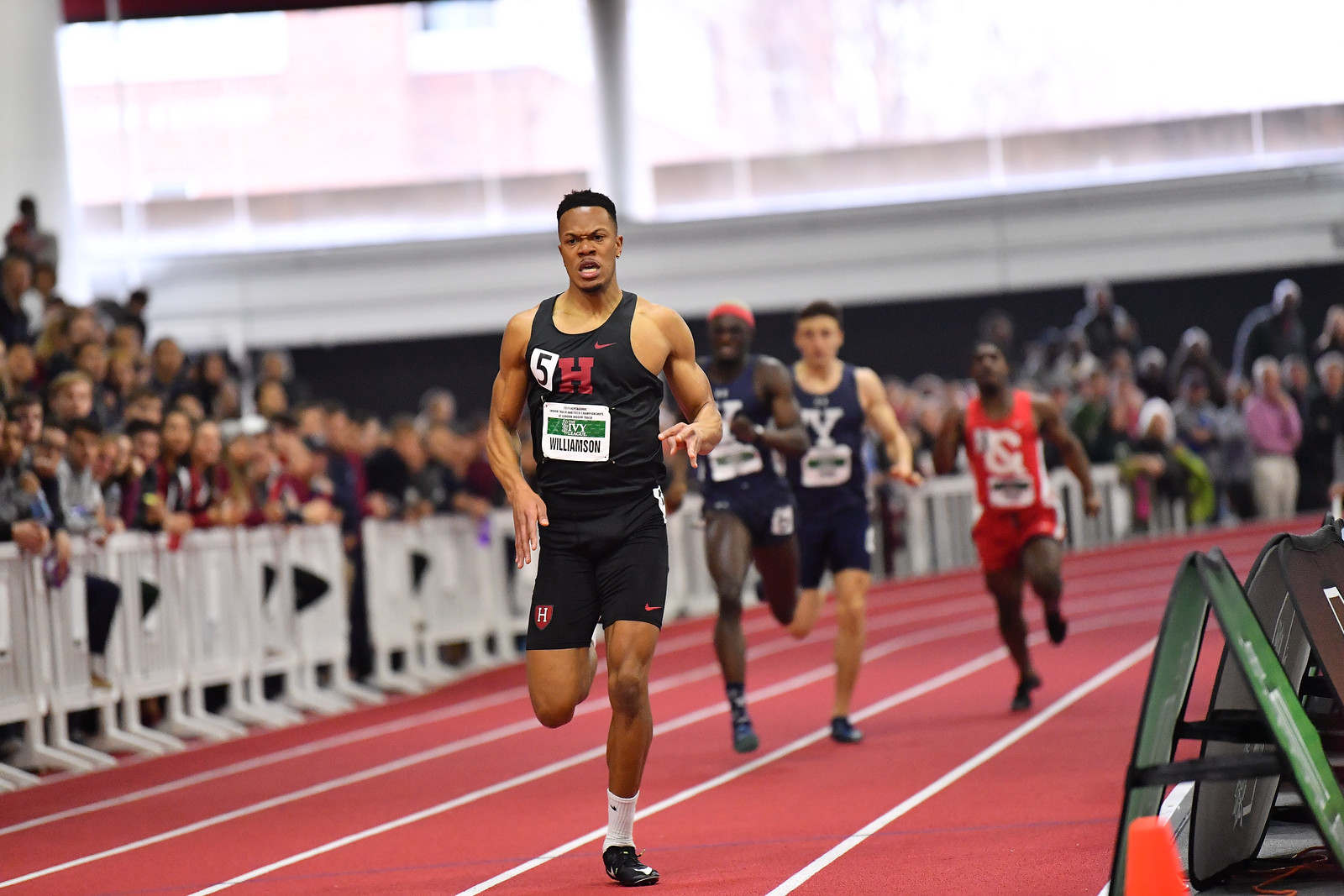 By Mahtab Shihab, Crimson Staff Writer
Sprinter Jovahn Williamson speeds past the rest of the competiton at Ivy Heptagonals, where he claimed first in the 400m dash. By Courtesy of the Ivy League

The reigning 400m Ivy League Heptagonal champion is no stranger to success. Sophomore sprinter Jovahn Williamson has always been one of the fastest runners in the country. He was one of the most decorated high school sprinters in New York State history, placing third at the state championships and second at New Balance Nationals in the 400m his senior year.

With an impressive high school resume behind him, the Dix Hills, N.Y., native started out his collegiate career expected to already become one of the best sprinters the Ivy League had to offer. With teammate Rodney Agyare-May joining him, Harvard sprinting was expected to be rejuvenated with star talent.

Williamson’s indoor track season his freshmen year saw him put up impressive times, with season bests of 48.46 in the 400m and 22.75 in the 200m. He placed eighth at the Ivy League Heptagonal Championships in the 400m, missing out on his chance to score points for the team.

However, the talented freshman knew he was capable of performing at a higher level. His high school personal records were faster than the times Williamson recorded that indoor season, and he recognized he would have to put in the work to attain his potential.

Growing more accustomed to the Crimson’s training and track regime, Williamson took massive leaps his freshman outdoor season. He lowered his 200m time to 21.94 and his 400m time to 47.56. He won the 400m at the outdoor Ivy League Heptagonal Championships and earned the chance to compete against the best in the nation at the NCAA D1 East Prelims.

Coming into this season, Williamson was ready to show the Ancient Eight that his outdoor performance last season was no fluke. Winning the outdoor 400m as just a freshman, there was immense pressure for the sophomore standout to excel once again and maintain his title as the 400m champion.

Despite the pressure mounting, Williamson continued to improve and have some of the fastest times ever seen in a Harvard uniform.

“I would say the biggest factor in my improvement is the experience that I gained from last year,” Williamson said. “It is tough to transition into a new system as a freshman, but I feel like that experience helped me come into this year with new confidence and a better plan on how to reach my goals for the season.”

The sophomore sprinter started his season on a high note with a record-breaking performance at the BU Season Opener. He broke the school record in the 300m with a time 33.75. He followed up that race with a victory at the Harvard-Penn dual meet, earning another fast 300 time of 34.37.

Williamson continued to shine throughout the season, earning victories in both individual and relay events at multiple meets. He would be put in the Harvard spotlight once again the Clemson Invite, where he broke the school record in the 400m.

Williamson's record highlighted day one in a meet against some of the nation's top track talent. He crossed the finish line in 47.39 seconds, and outperformed some of the best sprinters the country had to offer.

“It was very thrilling,” Williamson said. “I felt like I was finally starting to see good progress in my training and confidence.”

Breaking the 300m and 400m record gave the New York native the validation that his training was paying off and he was performing at the potential he was capable of. The sprinter attributes to his success to a calm and relaxed pre-meet routine that allows him to stay focused and composed before he competes.

“On meet days I usually just try to stay as calm and relaxed as possible to ease my nerves,” Williamson said. “I don’t really have any pre-meet traditions other than eating a good meal and drinking plenty of water beforehand.”

With an accomplished set of races behind him, Jovahn Williamson recognized it was now time for him to perform at the biggest meet of the season: The Ivy League Heptagonal Championships.

“We were working diligently at practice with our coaches to be best prepared for the championship,” Williamson said. “We need everyone at their best in order to leave a mark on the Ivy League.”

On the day of Heps, the 300 and 400 meter record holder had some of the best races of his life. Starting off with a second place finish in the 200m with a time of 21.94, he was ready to make up for his 400m performance from last year.

Williamson not only won, but dominated the rest of the competition. He ran 48.10 in trials, almost half a second faster than everyone else. He followed that up by running a blazing 47.53 in the 400m final, outlasting Penn’s Anthony Okolo by over a second.

Jovahn Williamson now has two Ivy League championships under his belt and he still has five seasons of track and field ahead of him. The best sprinter in Harvard history still has even more left to prove.

—Staff writer Mahtab Shihab can be reached at mahtab.shihab@thecrimson.com.