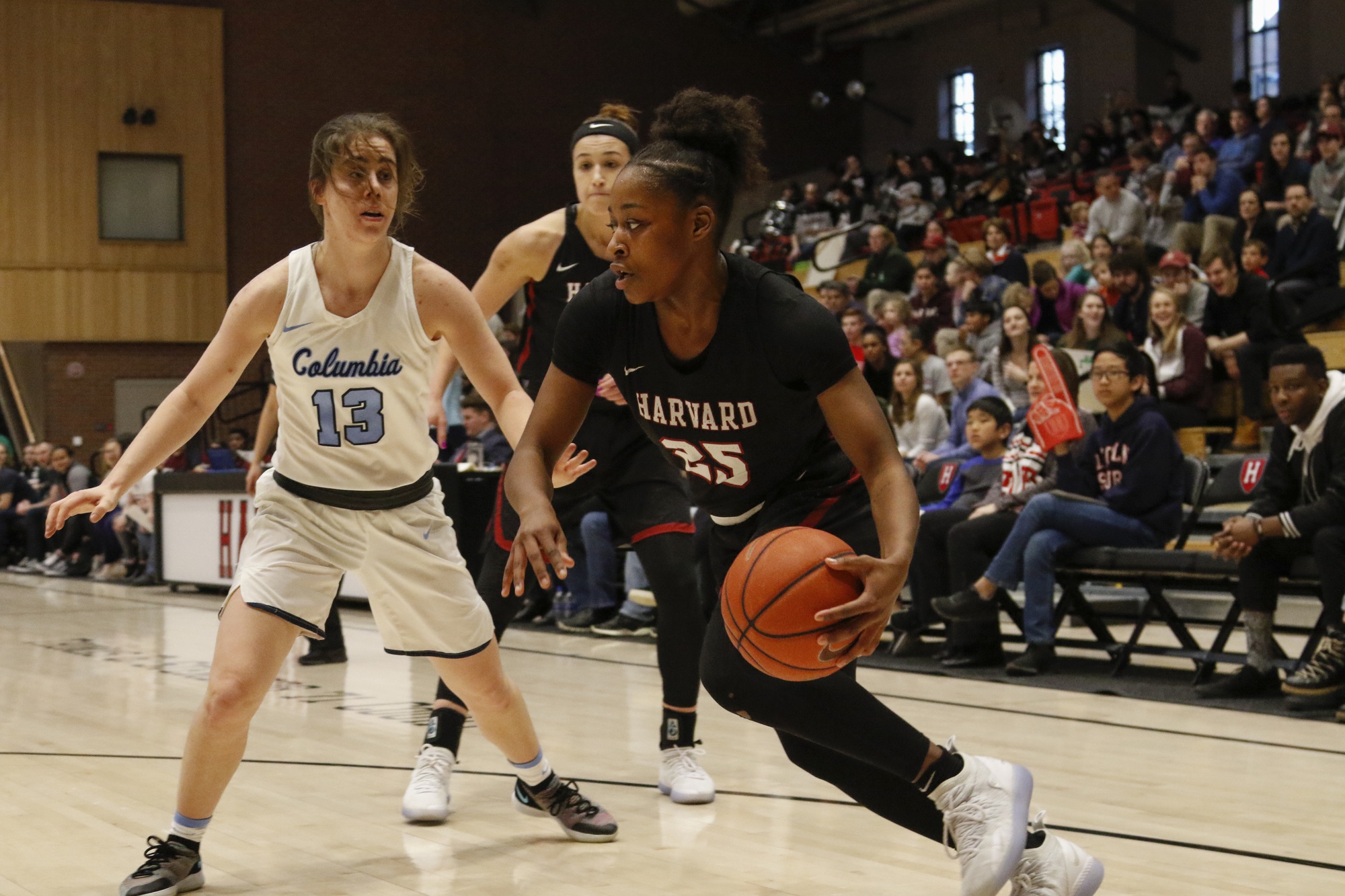 First year guard Tess Sussman dove for a steal, passed the ball to junior point guard Katie Benzan, and sprinted down the court. Benzan looked right and then fired the ball left to a streaking Sussman, who converted a layup to push Harvard’s lead over Columbia to 38-14 midway through the second quarter. The crowd and bench erupted, and Benzan’s no-look pass put an exclamation point on a 69-56 victory over the Lions on senior night at Lavietes Pavilion.

As is the tradition in the last home game of the season, head coach Kathy Delaney-Smith gave starts to all four of the Crimson’s departing seniors, and guards Kelsey Bogdan, Madeline Raster, Nani Redford, and Sydney Skinner responded by giving Harvard (16-11, 9-5 Ivy) a 13-6 lead before the first substitutes came in more than six minutes into the game.

“[I felt] excitement and a feeling of nostalgia,” Skinner said, “but all-in-all just a great feeling and excitement to finish out the season strong.”

The Crimson’s strong first quarter performance was encapsulated by a dominant 18-0 run that lasted over five minutes. After a slow shooting start left Harvard down 6-4 to Columbia (8-19, 4-10), the extended run ensured that there would be no repeat of the first meeting between these teams in Morningside Heights, when an abysmal first quarter left the Crimson down by 20, a deficit they cut into but were unable to completely erase.

Joining Harvard on the bench was Governor Charlie Baker ‘79, who cheered on his alma mater and served as a guest coach for the Crimson on a night in which Delaney-Smith added career win number 601 a night after reaching the landmark 600. 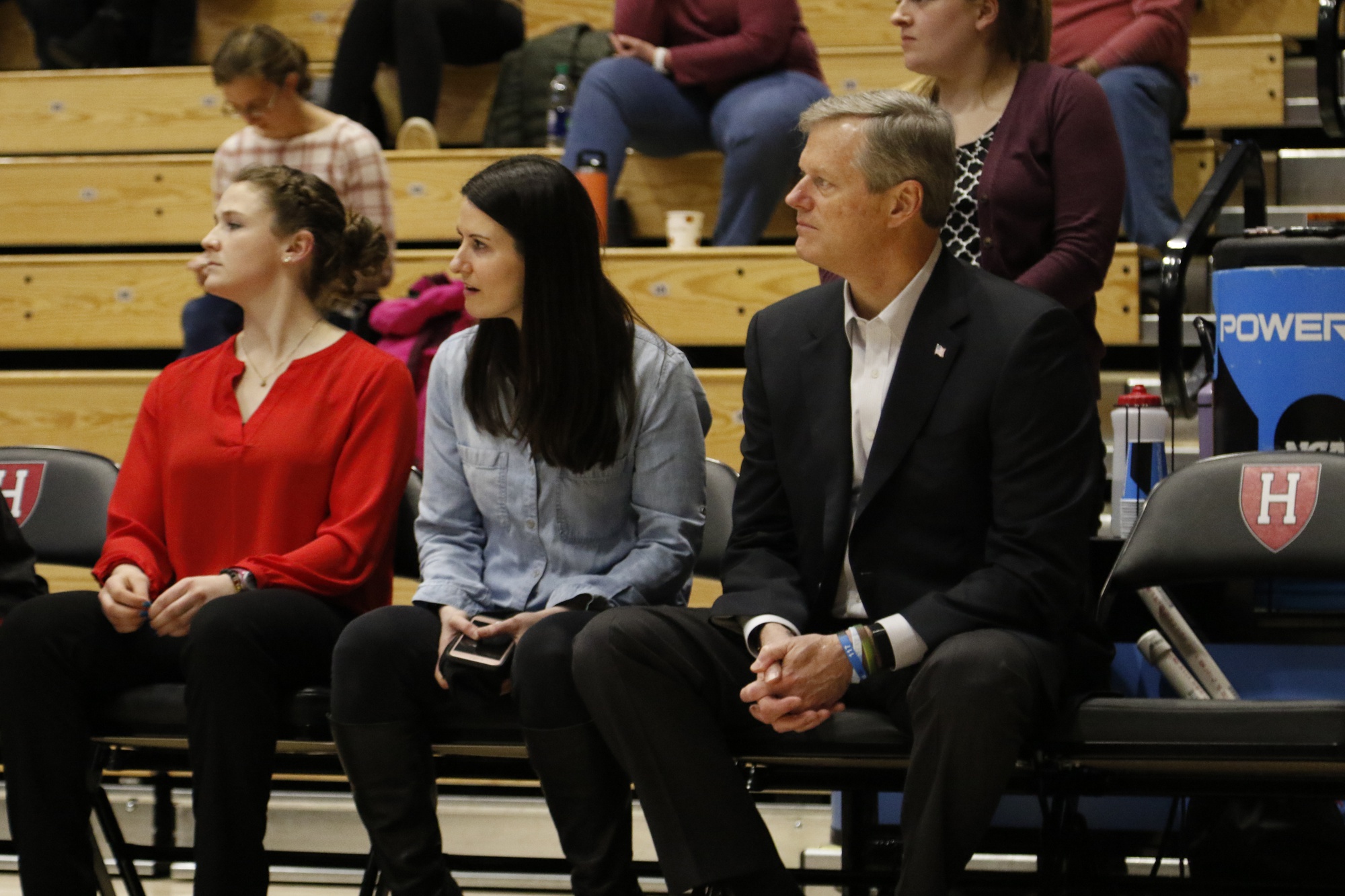 As would have seemed appropriate on senior night, Raster, Redford, and Skinner all reached double figures in scoring by the middle of the third quarter. Raster ended with a 14-point, 11-rebound double-double, while Skinner led the team with 17 points, 10 of which came in Harvard’s hot shooting first quarter.

“I honestly don’t really even think of the scoring aspect as much as just how well are we all playing together as a team,” Skinner said. “I think we shared the ball — we had a really strong first half. But it was the last home game, I wanted to make my mark as a Harvard women’s basketball player for the last time at Lavietes, and just wanted not to be shy and to be in attack mode.”

While the seniors led the way early on, Benzan provided most of the scoring punch for the Crimson later on. She ended up with 16 points, with 10 coming in a fourth quarter in which the rest of the team was held to just seven points.

“I think Katie Benzan was brilliant down the stretch,” Delaney-Smith said. “I thought she showed great poise and leadership.”

Harvard struggled to score after Benzan’s flair gave the Crimson its biggest lead of the night. After shooting 15-of-27 from the field and 6-of-14 from beyond the arc to that point, Harvard slumped to 9-of-40 shooting and 4-of-24 from three for the rest of the game, allowing Columbia to cut the deficit to five points with three minutes left.

The Crimson did just enough defensively, though, to ensure that its lead would shrink no further. Harvard was not quite as stingy as it had been the night before, when the Crimson held Cornell to 38 points in what was its best defensive performance of the season, but in the first half especially it clamped down on Columbia’s best scoring threats. Two months after first year forward Sienna Durr and junior guard Janiya Clemmons combined for 43 points against Harvard, they scored just six in the first half and 20 overall on 8-of-22 shooting on Saturday night.

Aside from being the final home game of the seniors’ Crimson careers, the contest had little significance for either team. Columbia had been eliminated from Ivy League tournament contention while Harvard’s win over Cornell on Friday meant that the Crimson had already locked up the third seed in the tournament heading into Saturday.

“We feel really good,” Skinner said. “Incredibly confident. I’ve had a really great feeling this whole year about how our team’s going to be in the tournament and that feeling has not wavered for one game even though we had some ups and downs this season. I think our team has every weapon we could ask for.”

The tournament begins next Saturday in New Haven, where Harvard will play Penn, against whom they went 1-1 this season, at approximately 8:00. The Crimson will seek to avenge a 57-52 loss to the Quakers in last year’s semifinals, a game in which Penn had the benefit of home-court advantage.