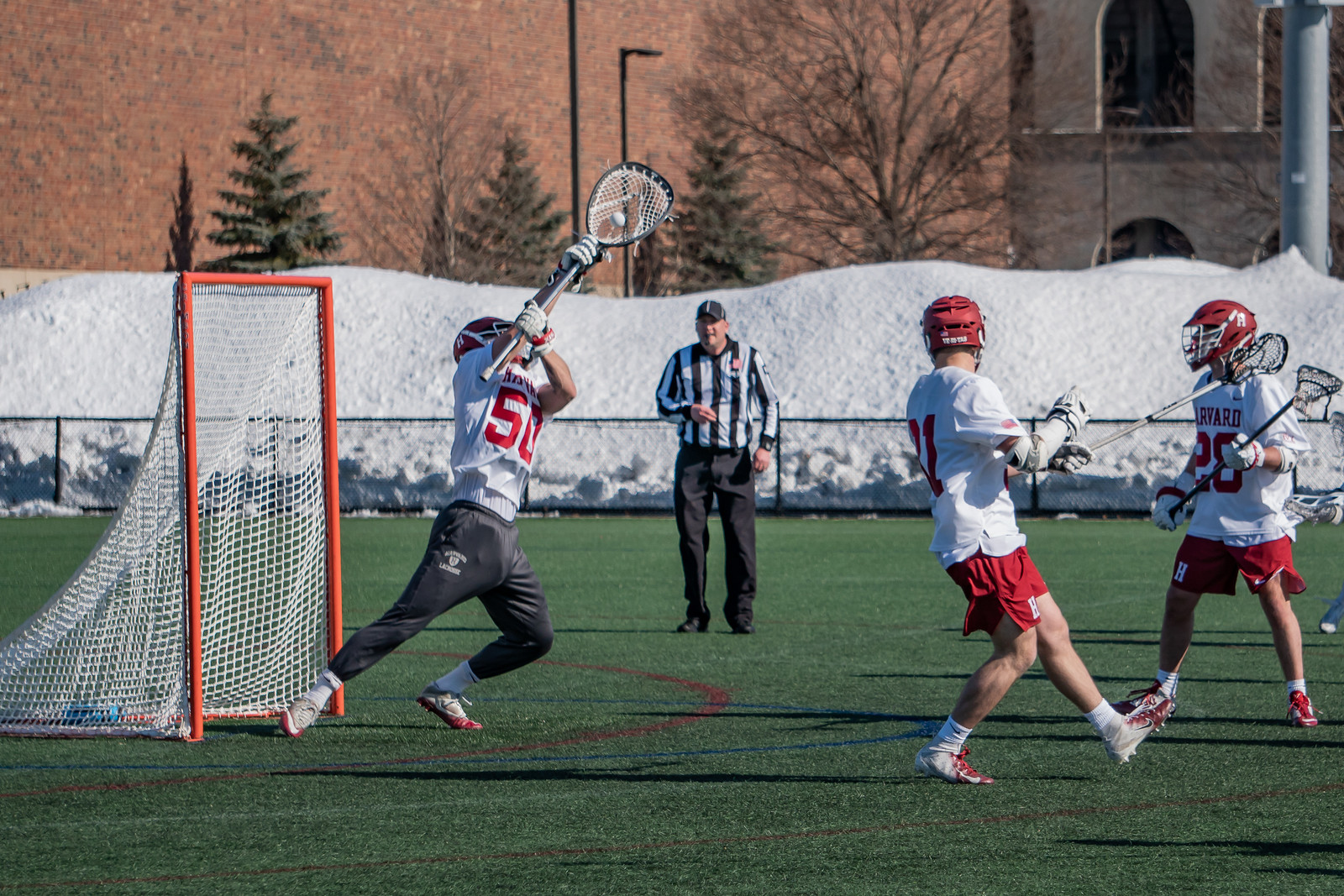 Sophomore goalkeeper Kyle Mullin nabs a shot versus Providence. The Westchester, Penn. native made a career high 20-saves versus the Friars. By Brendan J. Chapuis
By Ben Morris, Contributing Writer

They’ve been raving about him all year, and once again, sophomore goalie Kyle Mullin got it done.

Mullin not only recorded a collegiate career high 20 saves, but his presence in goal was essential in Harvard’s 9-8 win over the Providence Friars (2-4) on Saturday. Despite being outshot 47-33, three of which came for the Friars in the final 15 seconds, the Crimson was able to hold on to a much needed win and move to 2-3 on the year heading into conference play.

Harvard (2-3) was at an immediate disadvantage going into the game, as the team was without senior defenseman and tricaptain Spencer Daniel, junior attackman and tricaptain Kyle Anderson, junior attackman and top goal scorer Ryan Graff, and junior defenseman David Strupp, who were all out with injuries. In addition, Providence (2-4, 0-0 Big East) was looking to make up for a tough 17-16 loss against Sacred Heart in their previous game, and are led by senior attackman Brendan Kearns, who was recently selected 60th overall in the Major League Lacrosse draft by the New York Lizards.

The high intensity first quarter ended with a 5-3 lead for the Crimson. Junior midfielder Nigel Andrews led the early attack for Harvard, netting two of the five goals. “I thought that we played some of our best lacrosse of the season at moments throughout the game, both on the defensive and offensive side of the ball,” said Andrews. “What we need to work on is being able to consistently play that well throughout the whole game. If we can figure that out we can play with anyone in the country.”

Consistency has been a focal point for the team this season, as the Crimson have let a few games slip away from them. A Feb. 23 home game against UMass saw a slight lack of concentration on the Harvard end lead to three goals in a matter of minutes for UMass that ultimately lead to a loss, and the next game against Holy Cross on Feb. 26 saw the Crimson lose a 10-3 lead and eventually fall 11-10 in double overtime.

Despite the tough losses, the team has been committed to staying focused and not letting some unfortunate games early in the year impact the entire rest of the season. Already up 5-3 at the end of the first quarter against Providence, the Crimson was determined to see this game all the way through until its end.

Harvard kept up the tough pace in the second quarter, outscoring the Friars 2-0 to go into halftime up 7-3. One of the two goals was scored by freshman attacker Austin Madronic, who has proved an incredible addition to the team this season. Heading into the game, Madronic had been named Ivy League Rookie of the Week, his second time receiving this honor in the first three weeks of his collegiate career.

Whereas most would see this as a comfortable lead, the Crimson know that the game is not over until the final whistle blows. 50 seconds into the fourth quarter, Providence netted a goal which ended an incredible 36 minute and 16 second shutout run by Harvard. The goal was the first for the Friars since there was 5:26 left in the first quarter, but it would not be their last.

Providence picked up the pace in a major way, as the team gave its all in a comeback effort. Sure enough, with only 5:16 to go, the Friars had nearly come all the way back and found themselves down 9-8. “Providence really started to come alive in the fourth quarter and make a run,” said Mullin. “They were pushing the gas on offense and scoring goals.”

The game was following a similar script that the Crimson was used to, but this time, the team was set on writing a different ending.

With 48 seconds left in the game, Providence called a timeout after launching four shots in the previous minute, two of which Mullin saved, and one that deflected off the post. Mullin had been big all game, but the Crimson needed him just one last time.

Following the timeout, the Friars came back onto the field, and, in the final 15 seconds rattled off three consecutive shots, none of which were able to find the back net. The incredible saves gave Harvard its second win of the season and a great deal of momentum heading into Ivy League play.

The team was very aware of the situation they were in and how important it was to close the game out strongly. “Before Providence, we’ve had two games where we had a lead and the other team came back late,” said Mullin, speaking of the UMass and Holy Cross games. “The last minute of the fourth quarter on Saturday was a situation we had been in before, and we were confident that we were gonna make the stop. Thankfully, we did and were able to get our first win at home.”

It will be a while until the team returns home for a matchup with Albany on March 27, but Kyle Mullin and the Crimson will be plenty busy until then, with games against Brown, Boston University, and Dartmouth to fill the void in the meantime.