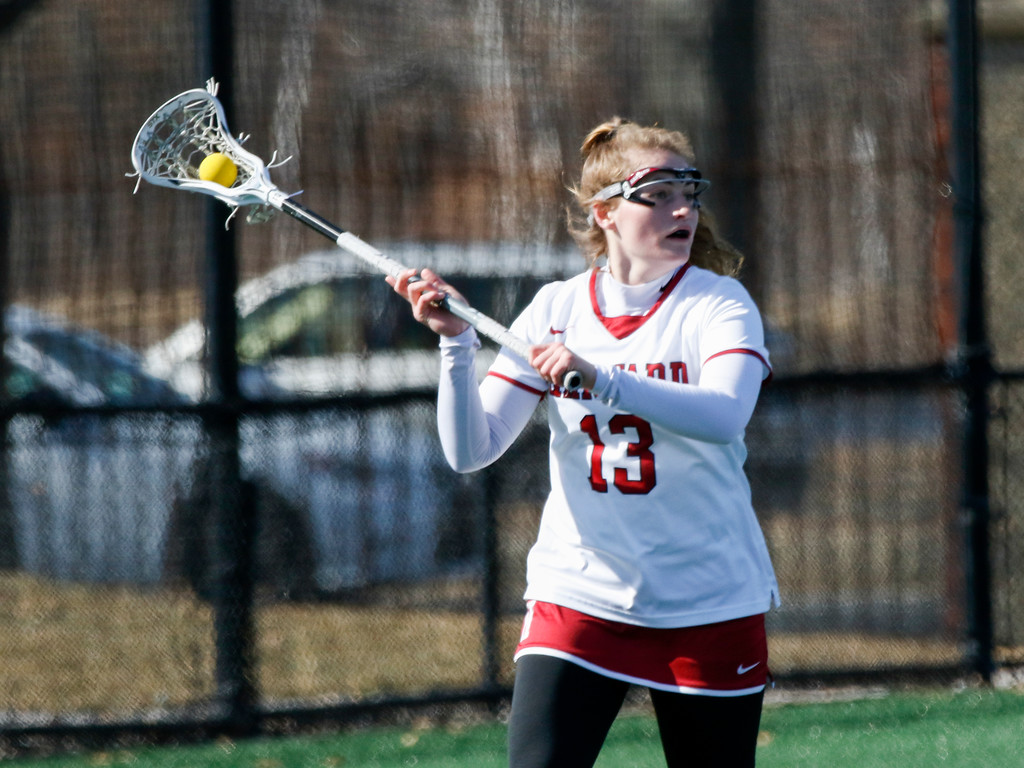 Tri-captain Keeley MacAfee contributed three goals on the week as the Crimson went 1-1, finishinoff a 9-8 nailbiter against Boston University before dropping Saturday’s match to No. 11 Denver. By Timothy R. O'Meara
By Ben Stern, Crimson Staff Writer

The inflatable sports bubble over Harvard Stadium protected both teams from a cold, gray drizzle on Sunday, but it could not protect Harvard from No. 11 Denver’s blistering attack in the second half.

Captain attacker Keeley MacAfee notched a goal at 26:28 in the second period to bring the score to 7-5 before Denver pulled away. Freshman midfielder Grace Hulslander recorded a first-half hat trick, and junior attacker Hannah Keating added a pair of scores to round out Harvard’s total.

The game was Hulslander’s third multi-goal effort on the year. The freshman sits in second on the team’s leaderboard for most goals, with 10. Hulslander kicked off the game’s scoring at 27:54 in the first stanza, with a slashing cut down the center of the crease. The Jamesville, N.Y., native flung down her stick in celebration as Harvard took a 1-0 advantage, one of two leads it would hold in the game.

“It was really awesome,” said Hulslander of her team’s strong start. “I think this team has been waiting for a moment like this to prove who we are and, you know, wear that chip on our shoulder. Obviously, we didn’t come out with the win today, but I think we fought very hard in the first half.”

Denver peppered the net relentlessly in the second half. Sophomore attackers Bea Behrins, Quintin Hoch-Bullen, and Elizabeth Radochonski led the way with four, three, and three goals respectively. The trio of classmates combined for 12 points on the day. Senior attacker Kendra Lanuza pitched in five more points for the Pioneers.

Denver’s precise, organized offense yielded 28 shots on goal in all. Sophomore goalie Grace Rotondo managed to save 11 of them from the Crimson, but the defense proved too porous for Harvard to mount a real comeback.

The game meant a little extra to Harvard rookie head coach Devon Wills, who hails from Denver, Col., and coached at the University of Denver for two years from 2010 to 2011. Wills, though, said she wasn’t particularly moved by the chance to play against a familiar uniform.

“I think there's been enough time and distance that, you know, it doesn’t really matter that much, but I do have a ton of respect for [Denver head coach Liza Kelly] and the staff and the program that she's built there,” Wills said. “So I think she's done a great job with it.”

Wills noted that she treats games against highly ranked opponents as opportunities to grow and credited the Pioneers for their success to date.

“You know, I think if you want to be the best, you got to play the best,” she said. “Denver is a great team, one of the top teams in the country, and they have definitely earned that ranking. And I think they're a totally different look from any other team we've played so far. So there's always things that we can get better with.”

Wills identified a couple of areas of improvement for the Crimson going forward.

“They were really good at pressuring our attackers, and I don't know if we were necessarily ready for that,” she said. “The draw controls were part of it too. So it's just one of those things where we can really think about focusing on the basics and not letting them exploit our weaknesses. I think they came in wanting to compete for the full 60 minutes, whereas we kind of competed for, you know, I’d say 70 percent of the game.”

The loss followed a thrilling double-overtime 9-8 victory over Boston University last Wednesday. Sophomore attacker Madison Conklin led the charge in that showdown, tallying four assists and three goals, including a game-winner with 3:59 left in the second overtime.

Harvard will look to bounce back against Binghamton on Saturday. Conference play resumes on Tuesday, March 24, with a home game against Yale.