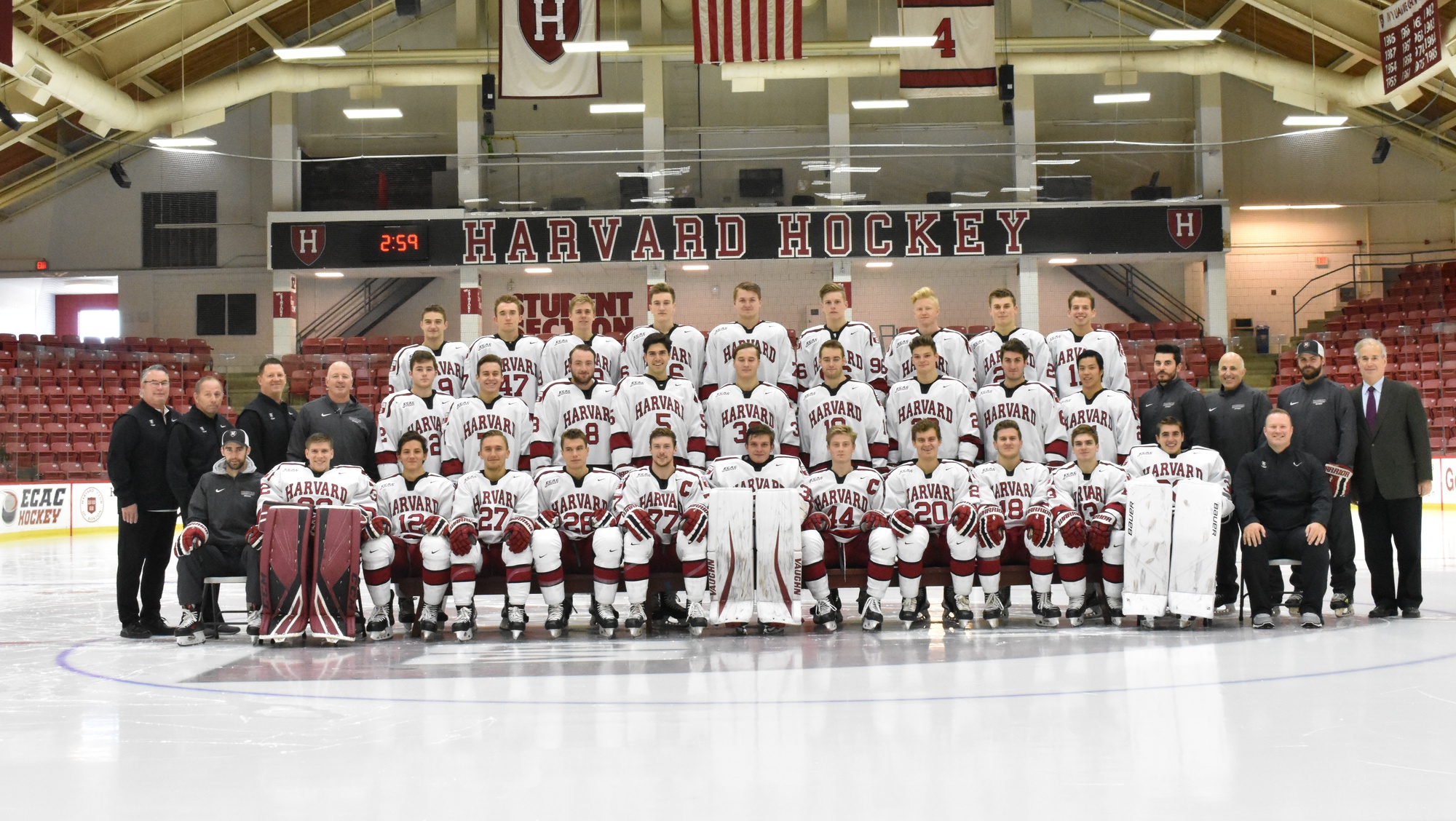 By Amanda M. DiMartini
Relive the No.13/14 Crimson's campaign as it prepares for this Friday's NCAA Tournament Regional matchup with No. 4 UMass.
By Spencer R. Morris and Crimson Multimedia Staff

The 2018-2019 Crimson. After losing important forward Ryan Donato to the NHL, one of the major obstacles facing Harvard to start the year was replacing the scoring void left by Donato, an Olympian and Hobey Baker Hat Trick finalist in 2018. Ultimately, a talented crop of freshmen was poised to help make up for this loss — and then some. More uncertainty lay in the crease: Merrick Madsen '18, one of the program's most decorated net-minders, had graduated, and the starting spot was senior Michael Lackey's to lose. Time would tell whether Lackey was up to the challenge of commanding Harvard's number-one post. 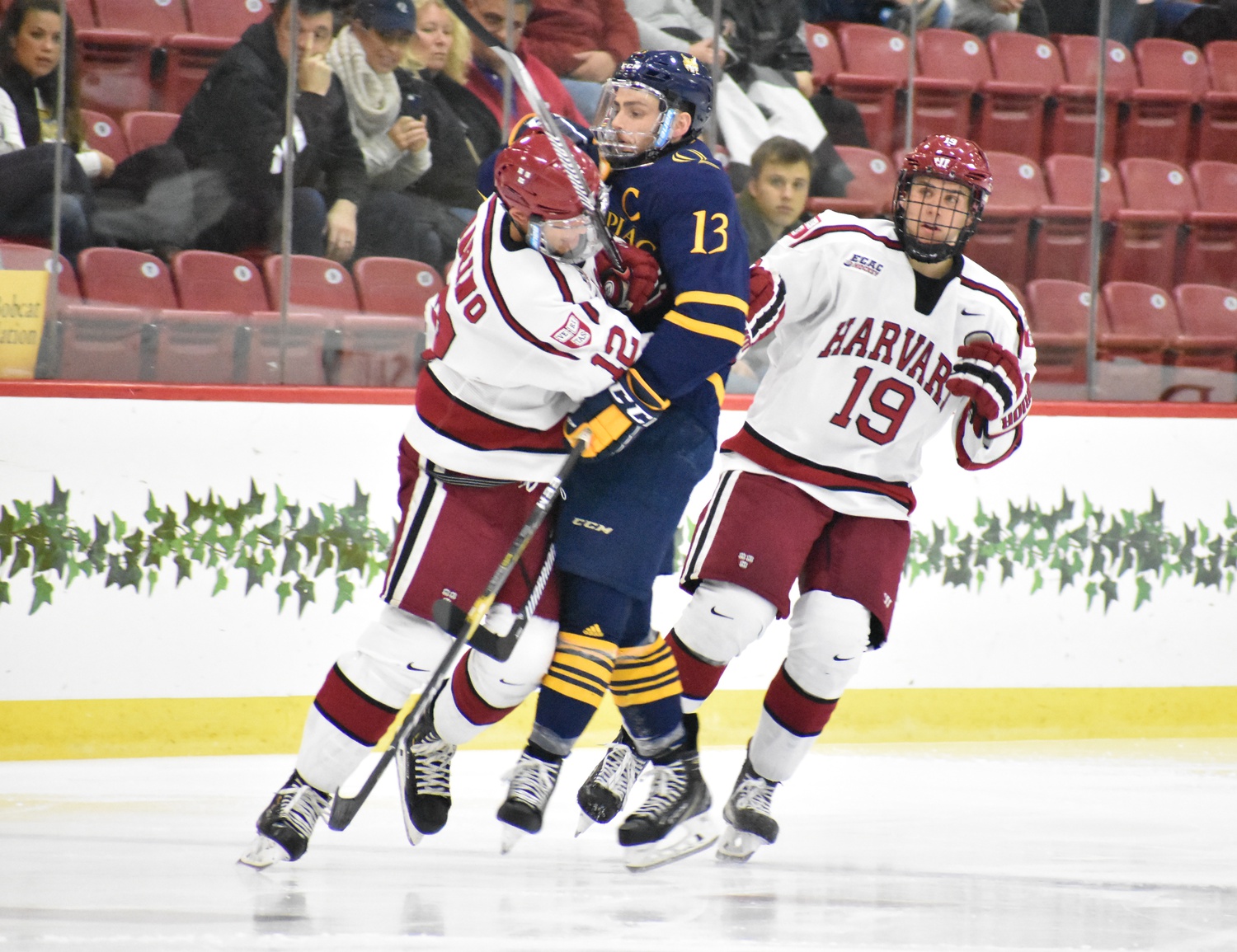 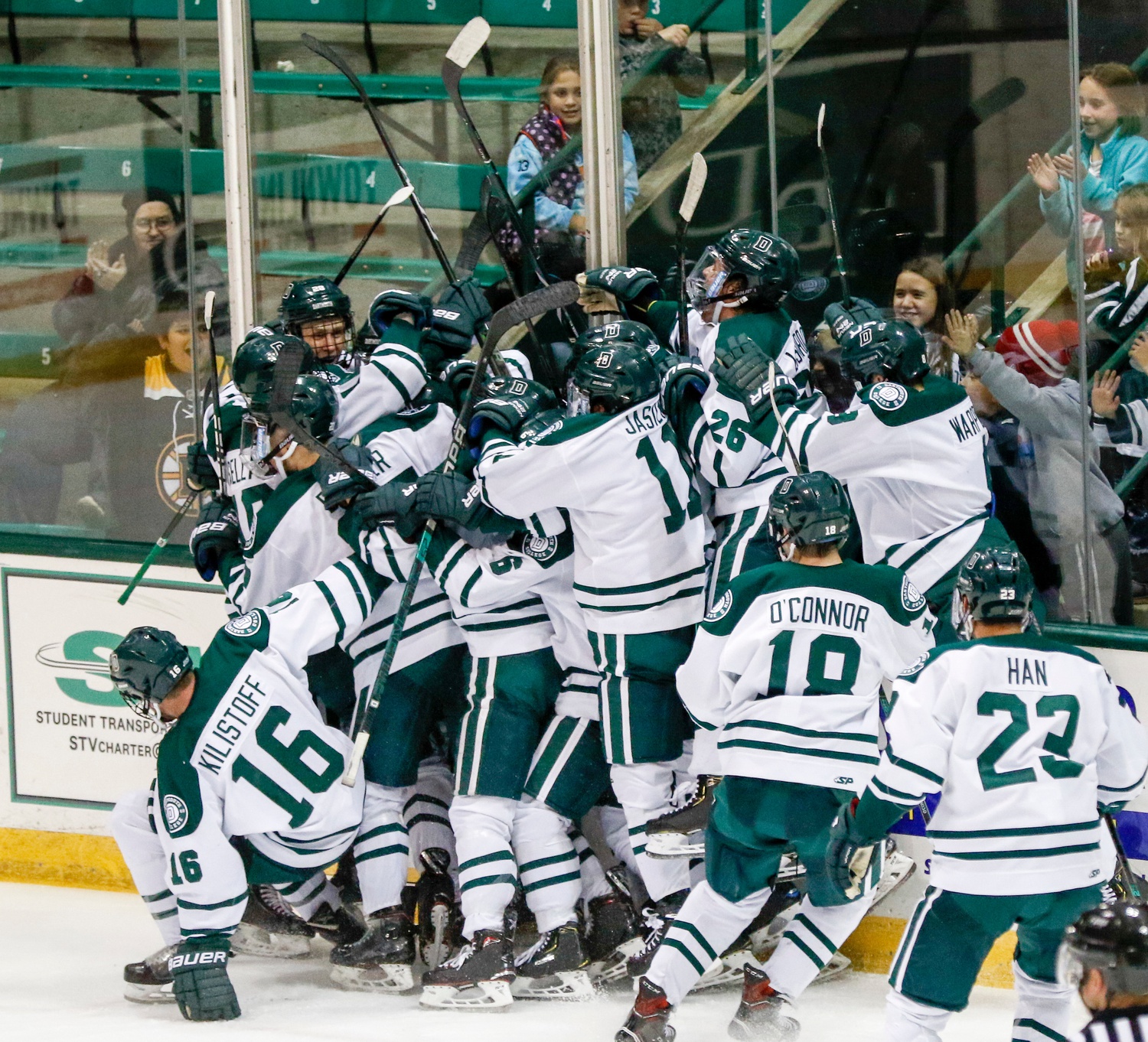 Not the Start Anybody Wanted -
By Timothy R. O'Meara

The Crimson’s campaign did not begin as planned. The season-opener at Ivy League rival Dartmouth saw numerous defensive breakdowns lead to seven goals allowed for Lackey, the last of which was the overtime winner for the Big Green. The loss overshadowed a five-point night (1–4—5) from junior defenseman Adam Fox, who entered the season on the short list of Hobey Baker Award contenders. The following week, a ranked Quinnipiac team came to Cambridge for Harvard’s home-opener. The Bobcats overwhelmed the Crimson, which had turned to backup goaltender Cameron Gornet after Lackey’s sub-par outing at Dartmouth. Harvard’s worthiness of elite status, as well as its stability between the pipes, remained to be seen. 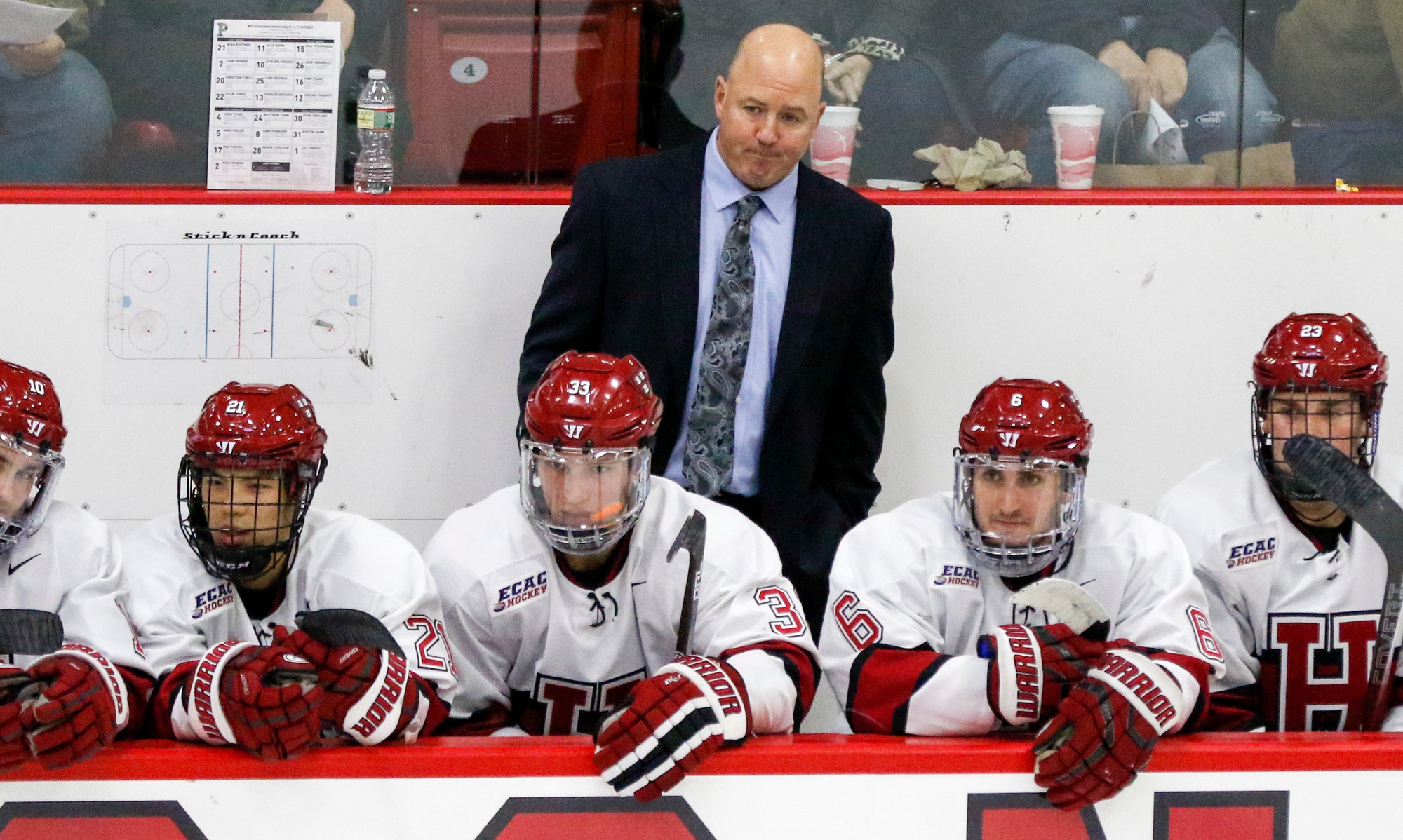 The Crimson icemen began to improve their play, but the results were reluctant to fall in their favor. Following the loss to Quinnipiac, Harvard skated to a 4-4 tie with a top-heavy Princeton squad. The team carried its winless record into Yale's Ingalls Rink, where an age-old rivalry tilt would put the Crimson to the test. 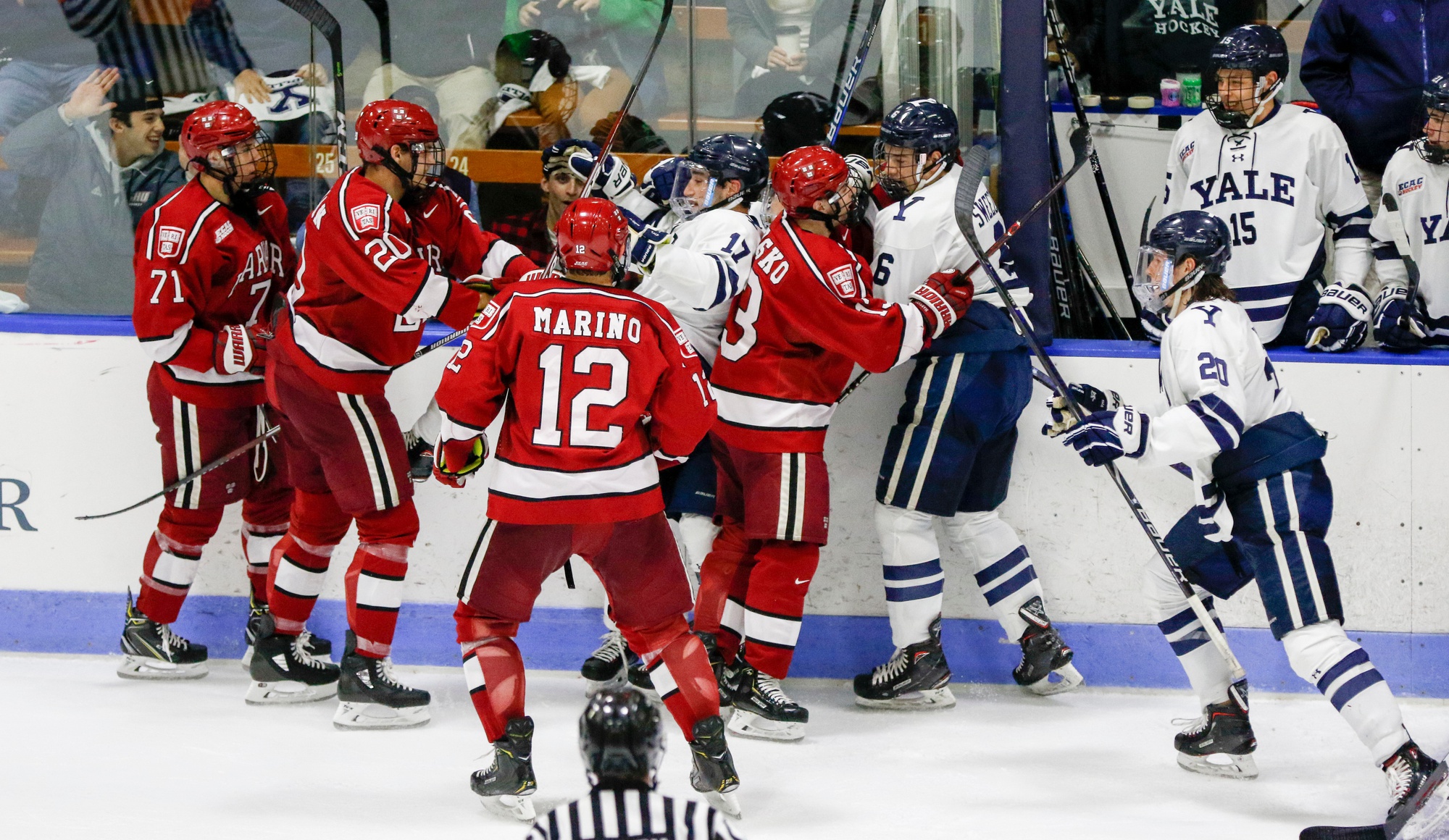 Just like the home contest with the Tigers, a heated affair at "The Whale" in New Haven, Conn., ended in a draw. The tie marked the first time in program history that Harvard stood without a win through its first four regular-season games. 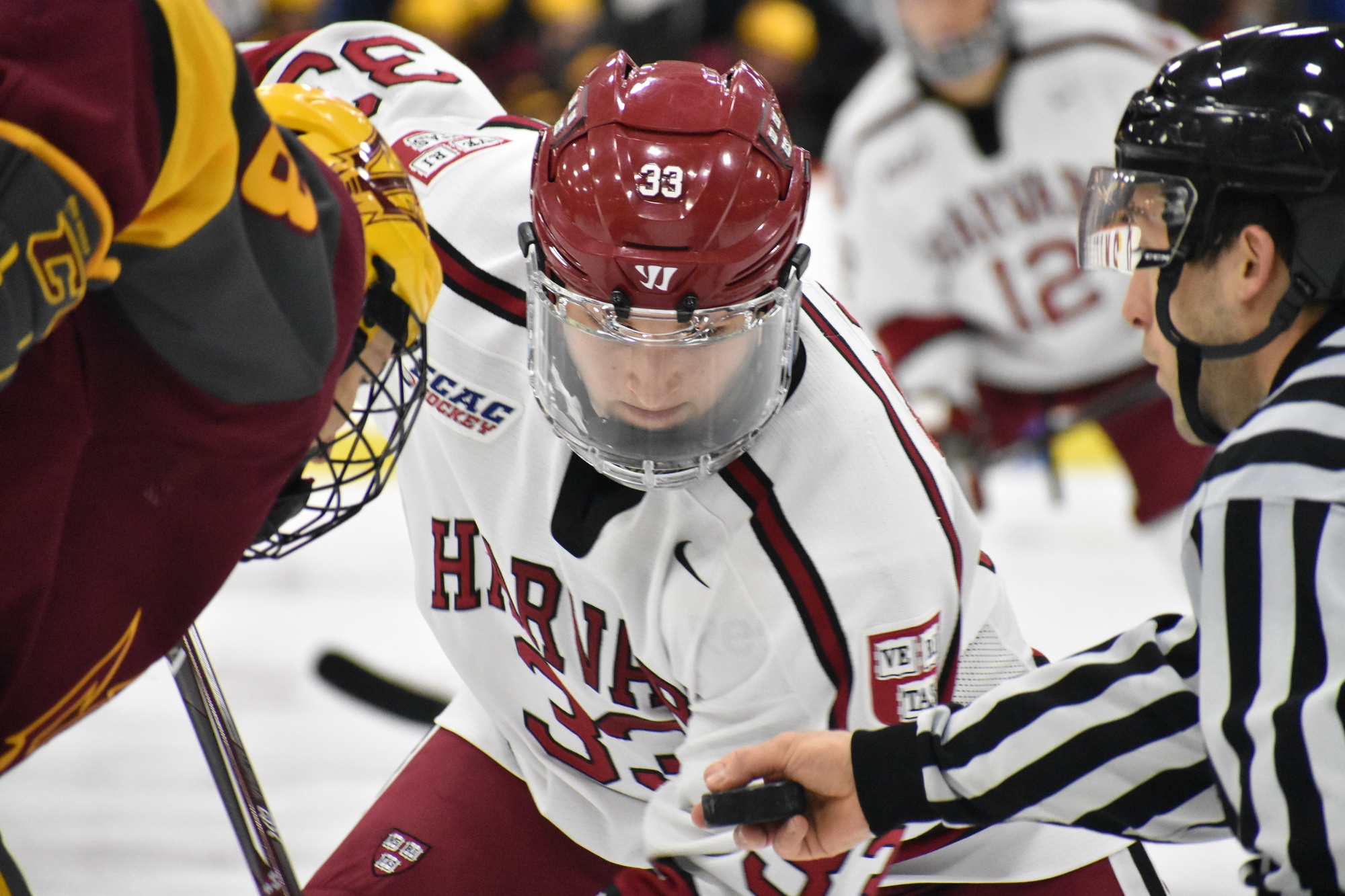 In mid-November, most students' attention turned to the annual Harvard-Yale football clash. Meanwhile, the Crimson was busy entertaining Arizona St., a team that surprised many pundits with its high-caliber play this season, in a weekend series. The sides split the back-to-back, but importantly, Lackey began to take form after a rocky start to the year. 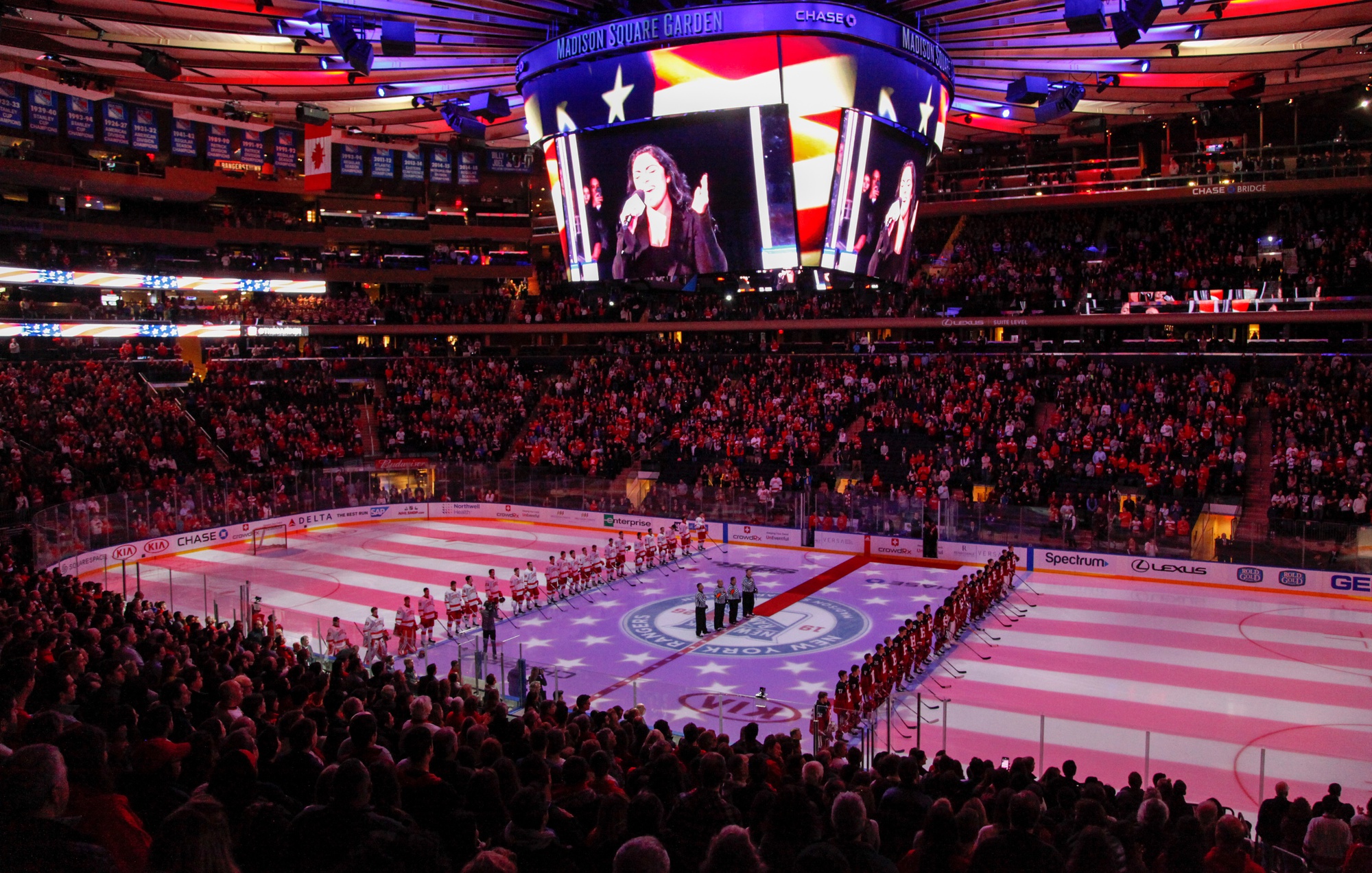 Over Thanksgiving break, Harvard faced off in one of the marquee games on its schedule: a battle with its most intense college hockey rival, Cornell, under the bright lights of Madison Square Garden. America's most historic arena provided a dramatic setting for Lackey's coming-out party (1 GA, .968 SV%), which powered the Crimson to victory and gave the group its most impressive win to date. 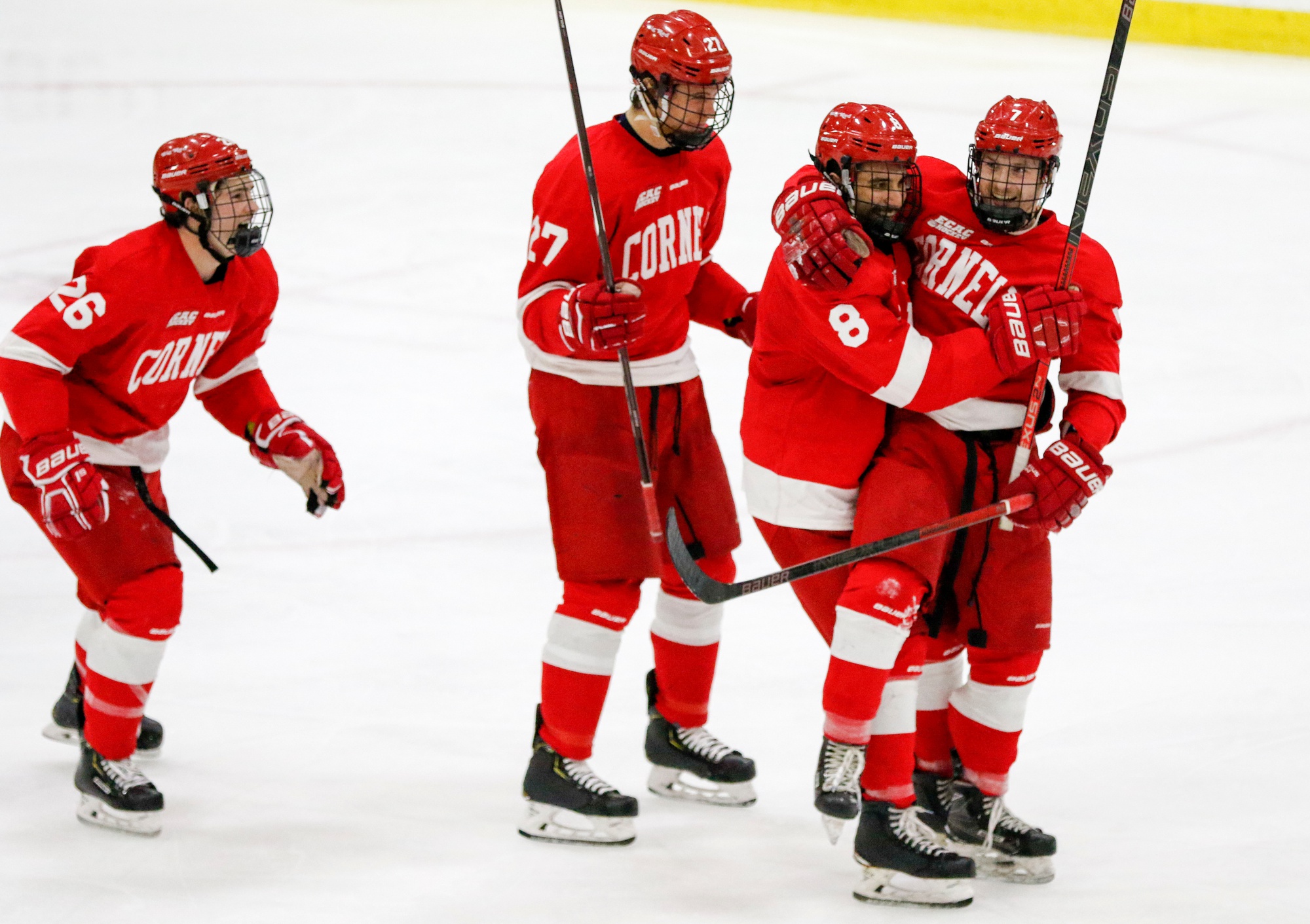 The keystone triumph at the Frozen Apple steered Harvard in the right direction. But the Big Red got its revenge the next weekend, stifling the Crimson at its home rink, the Bright-Landry Hockey Center. 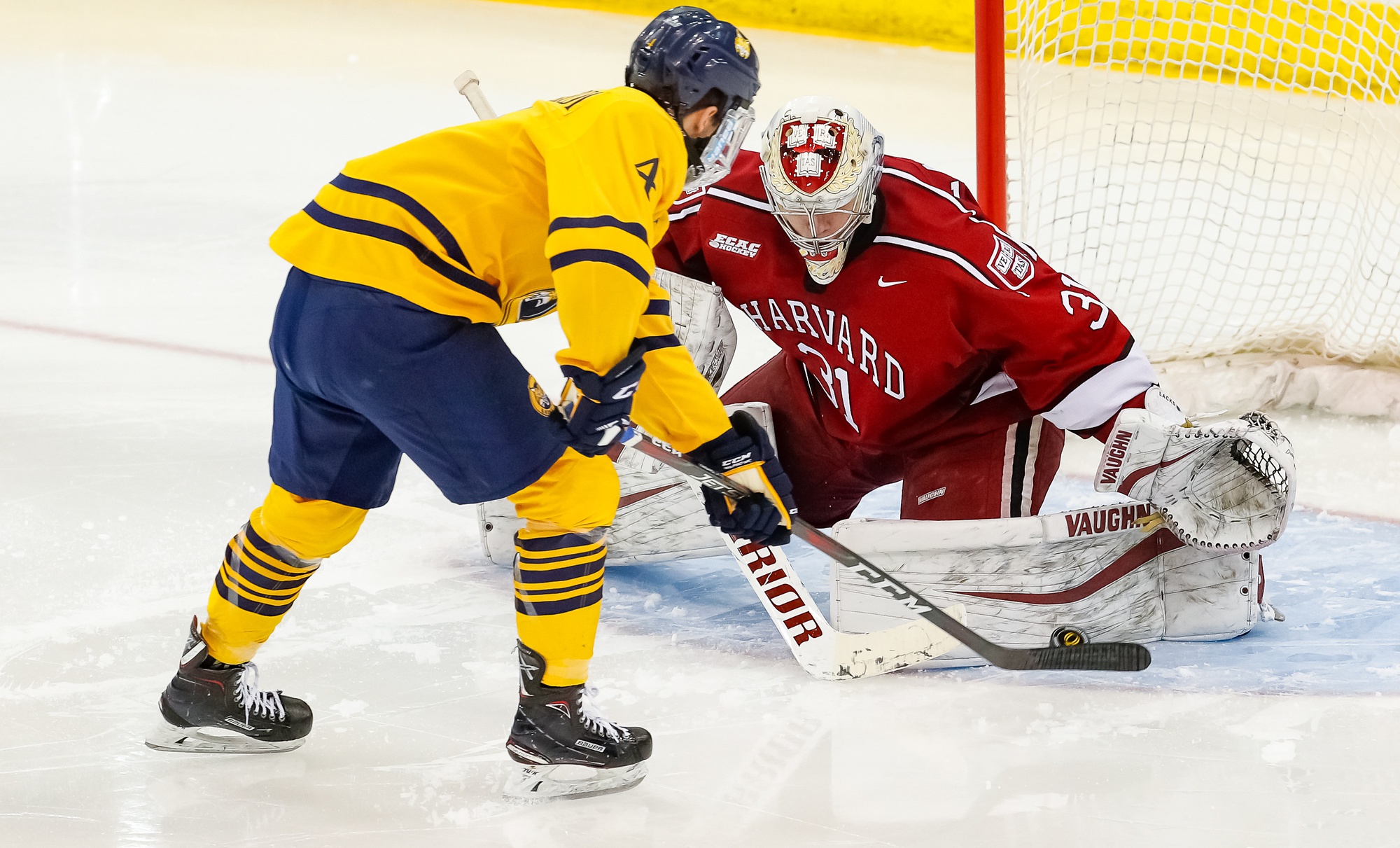 By Courtesy of Harvard Athletic Communications

Harvard rang in the new year with a series of mixed results: a draw with Boston University and a loss to Princeton followed victories against less talented foes Bentley and RPI. On Jan. 12, however, the Crimson logged its most monumental win of the season against then-No. 6 Quinnipiac, righting the ship and elevating team confidence to a new high. Lackey stood on his head that night, posting 46 saves (1 GA, .979 SV%) en route to the best performance of his career. With a go-to option in net, Harvard could squash its early-season question mark and rally to a stellar second half of the campaign. 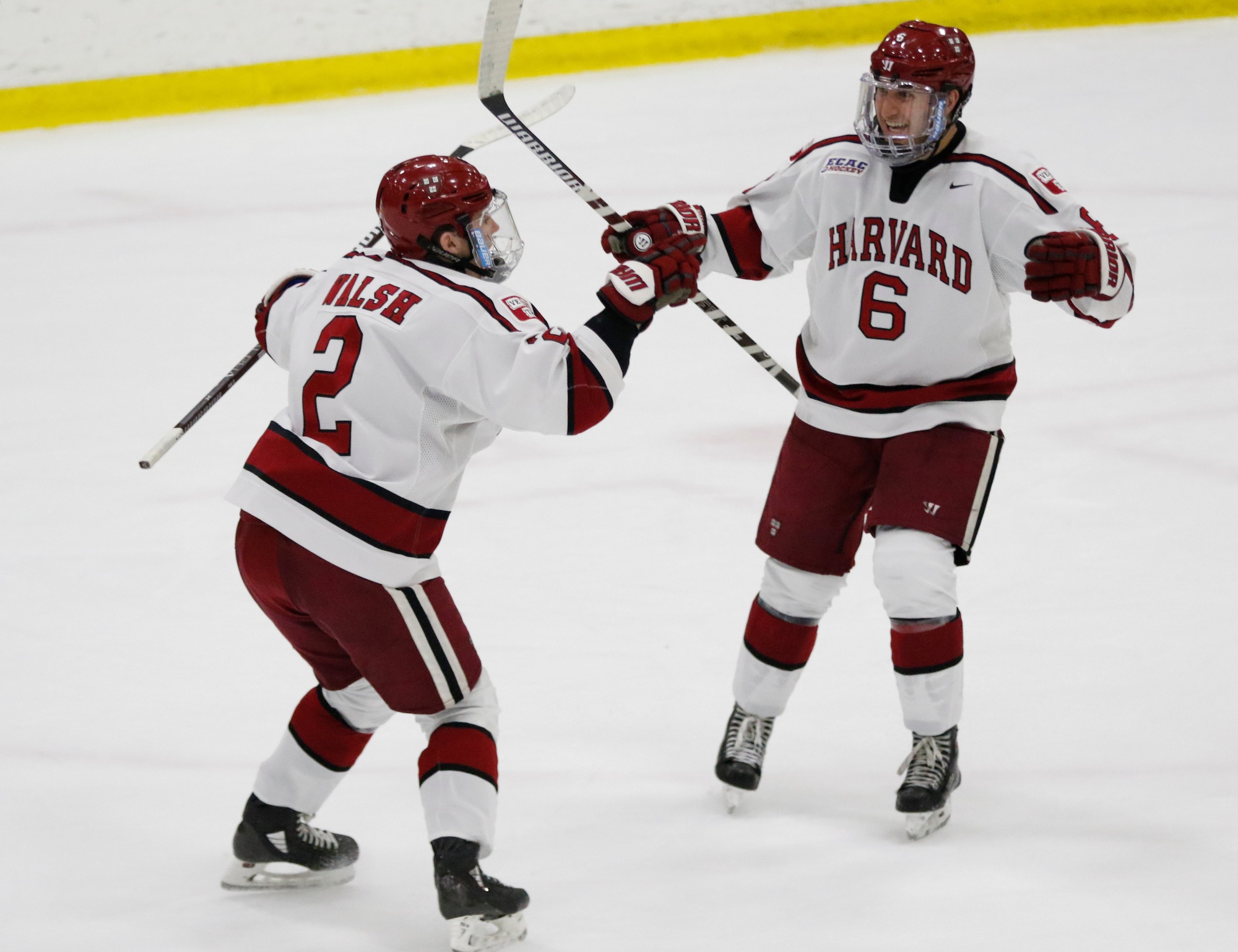 In late January, the Crimson put forth another inspiring performance. Sophomore defenseman Reilly Walsh defeated a top-10 Clarkson team with his overtime winner off a faceoff play, adding another key win to his squad's PairWise resume. The victory put Harvard back on track after it dropped another ECAC matchup to Cornell, this time at the famed Lynah Rink in Ithaca, N.Y., the week prior. It also marked the inception of a seven-game home win streak that took the Crimson all the way through its conference quarterfinal sweep of Dartmouth in late March. 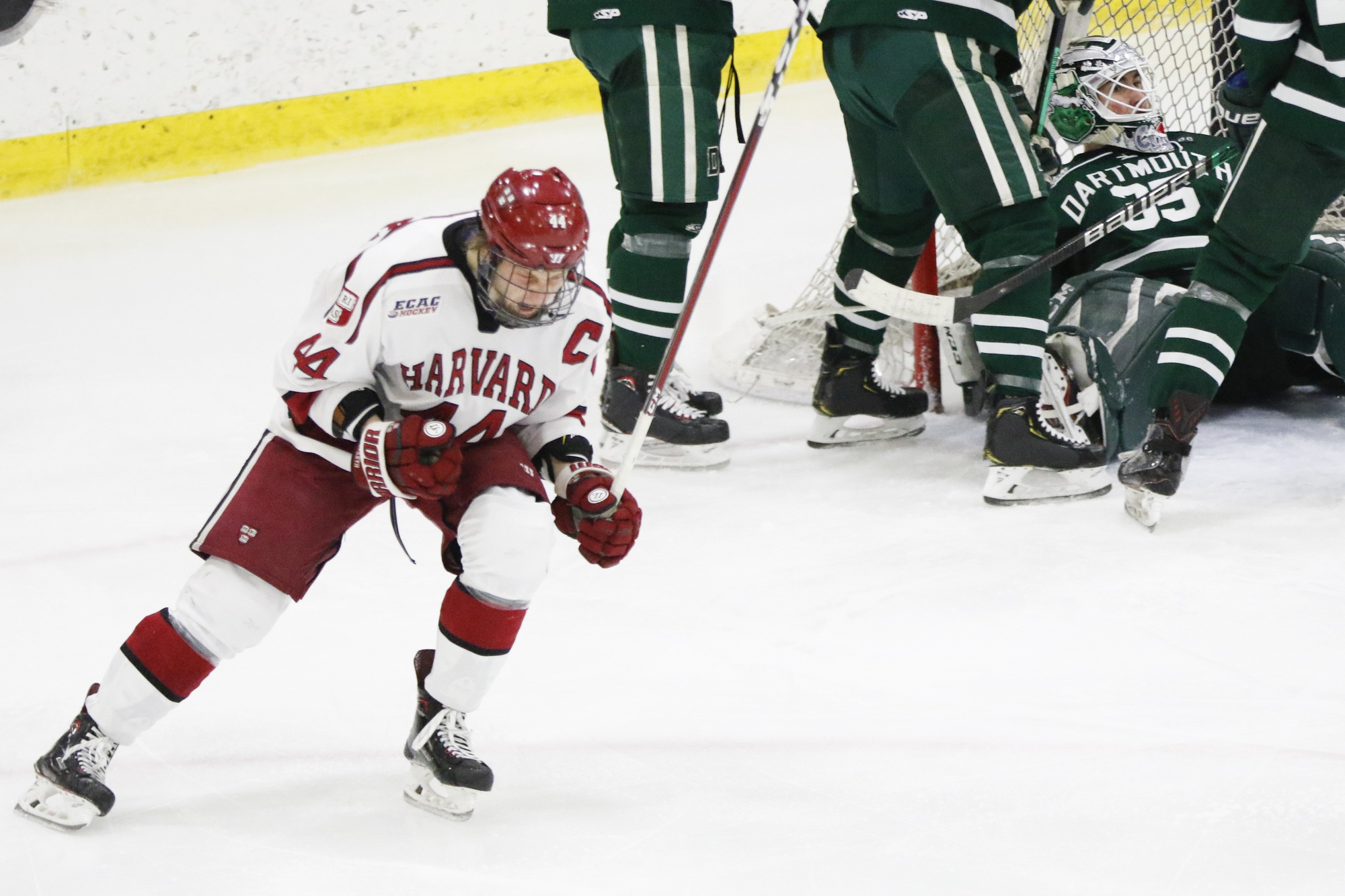 As classes resumed on campus, the Big Green visited Harvard looking to claim the season series against the Crimson for the first time since 2012-2013. Harvard had other plans, though, rattling off four unanswered goals after entering the first intermission down by a score. The victory continued a small but meaningful streak of four consecutive wins into the month of February — a jam-packed month for Boston's hockey elite. 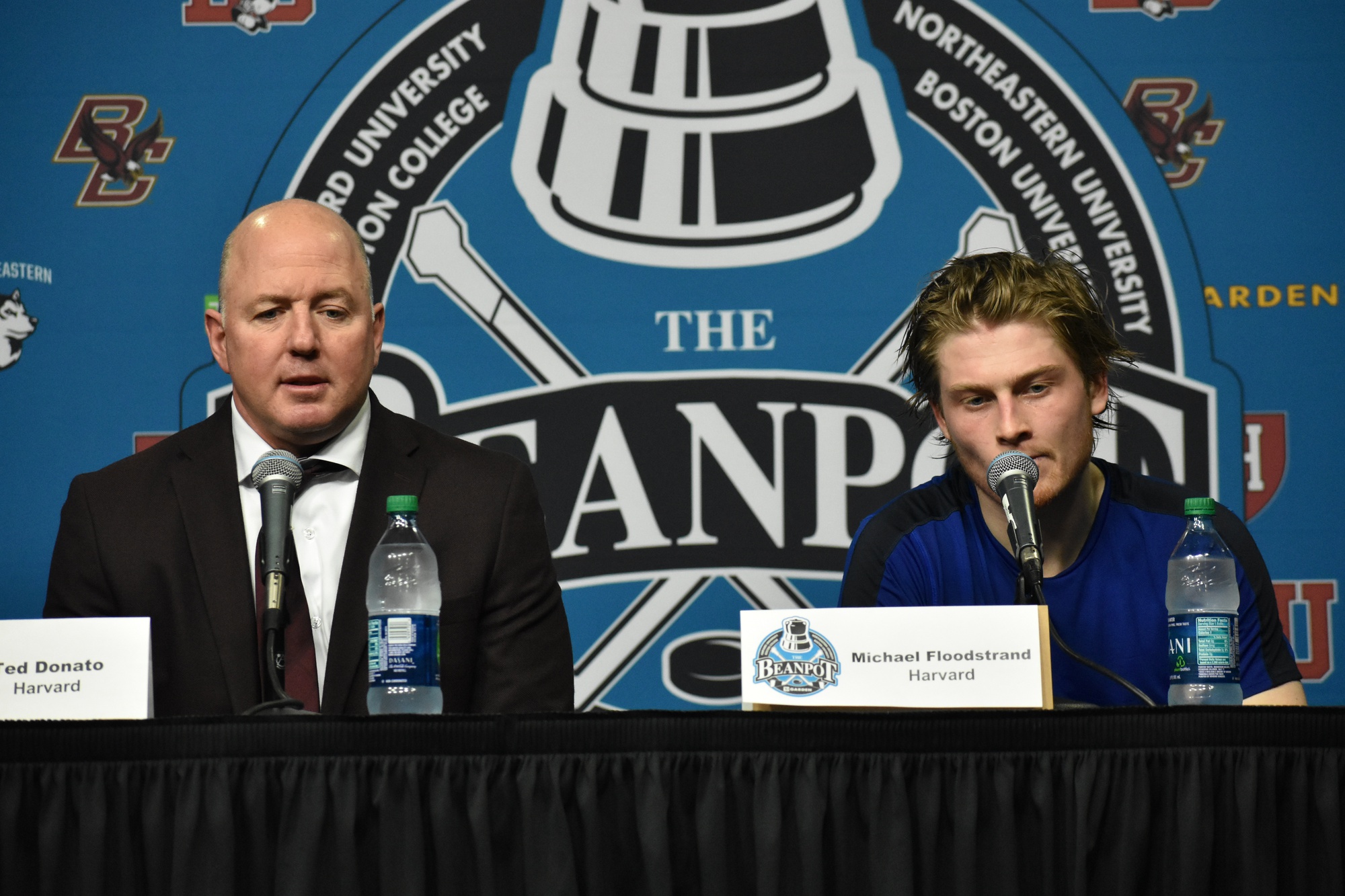 Mid-February came around and, as always, so did the Beanpot Tournament. Boston's annual college hockey showcase offered Harvard a chance to return to the title game after missing out in 2018. Alas, the Crimson bowed out to Boston College in the semifinal round, mustering just one goal — especially disappointing for such a prolific offense. Lackey remained sturdy, though, and coach Ted Donato '91 and his group had no choice but to move on with their conference schedule to close out the year. 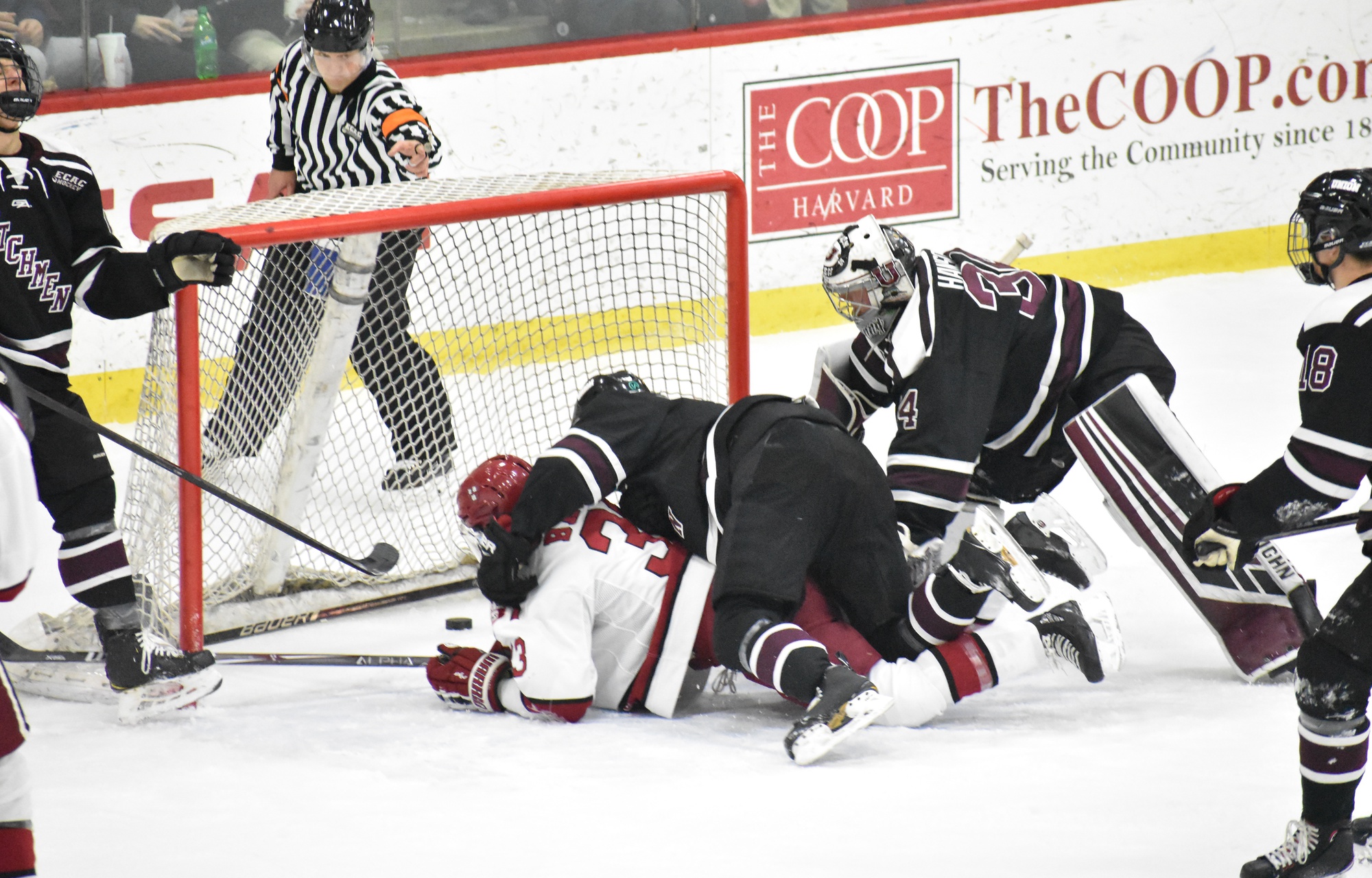 The Beanpot defeat did not derail Harvard from its spurt of formidable play. The Friday between Beanpot rounds, the Crimson bested another threatening ECAC foe, then-ranked Union. The Harvard powerplay, the brainchild of assistant coach Rob Rassey, went 4-for-4 with the man advantage and furthered its national lead in execution rate with an automatic performance. 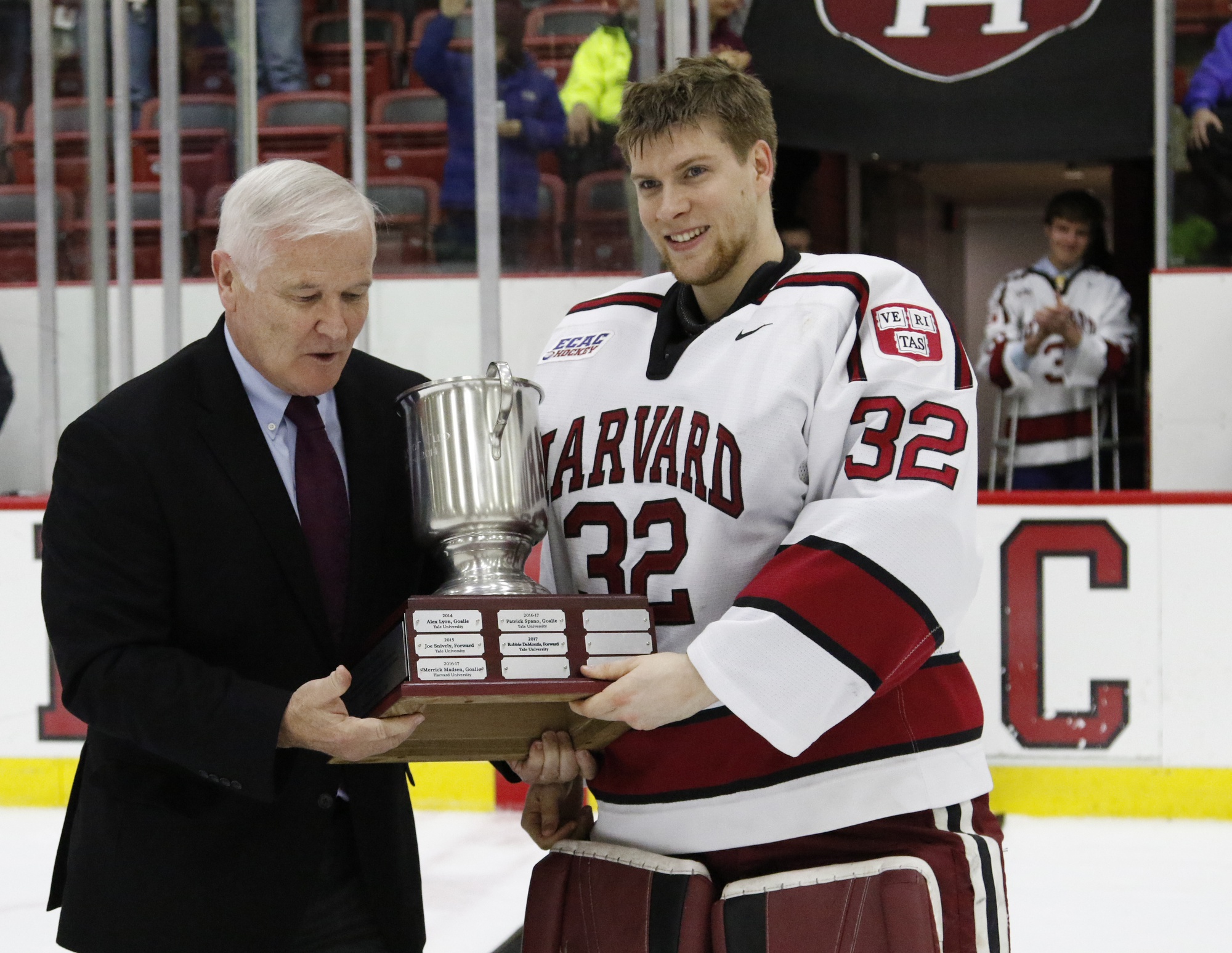 The Crimson did win its Beanpot consolation match, placing third in the tournament for the second stright season. It then embarked on its yearly "North Country" road trip to Clarkson and St. Lawrence, where it nabbed a comeback win over the Saints before dropping an important contest with the Golden Knights. The greatest loss of the weekend, however, was the loss of Lackey to knee injury. The senior had bucked his doubters and posted a superb regular season before exiting the Clarkson game in its middle frame, visibly shaken up after a net-front collision. Lackey would miss the remainder of the regular season and Harvard's conference quarterfinal series against Dartmouth while nursing the injury.

Gornet, filling in for the ailing Lackey, was excellent during his stretch of six starts (5-1-0, 1.83 GAA, .938 SV%), keeping the Crimson's NCAA Tournament hopes alive. The St. Louis, Mo., native is pictured here receiving the Tim Taylor Cup for most outstanding player of the annual Harvard-Yale game at the Bright, and an injured Lackey, sadly unable to dress for his class' senior night, can be seen in the background supporting his fill-in. 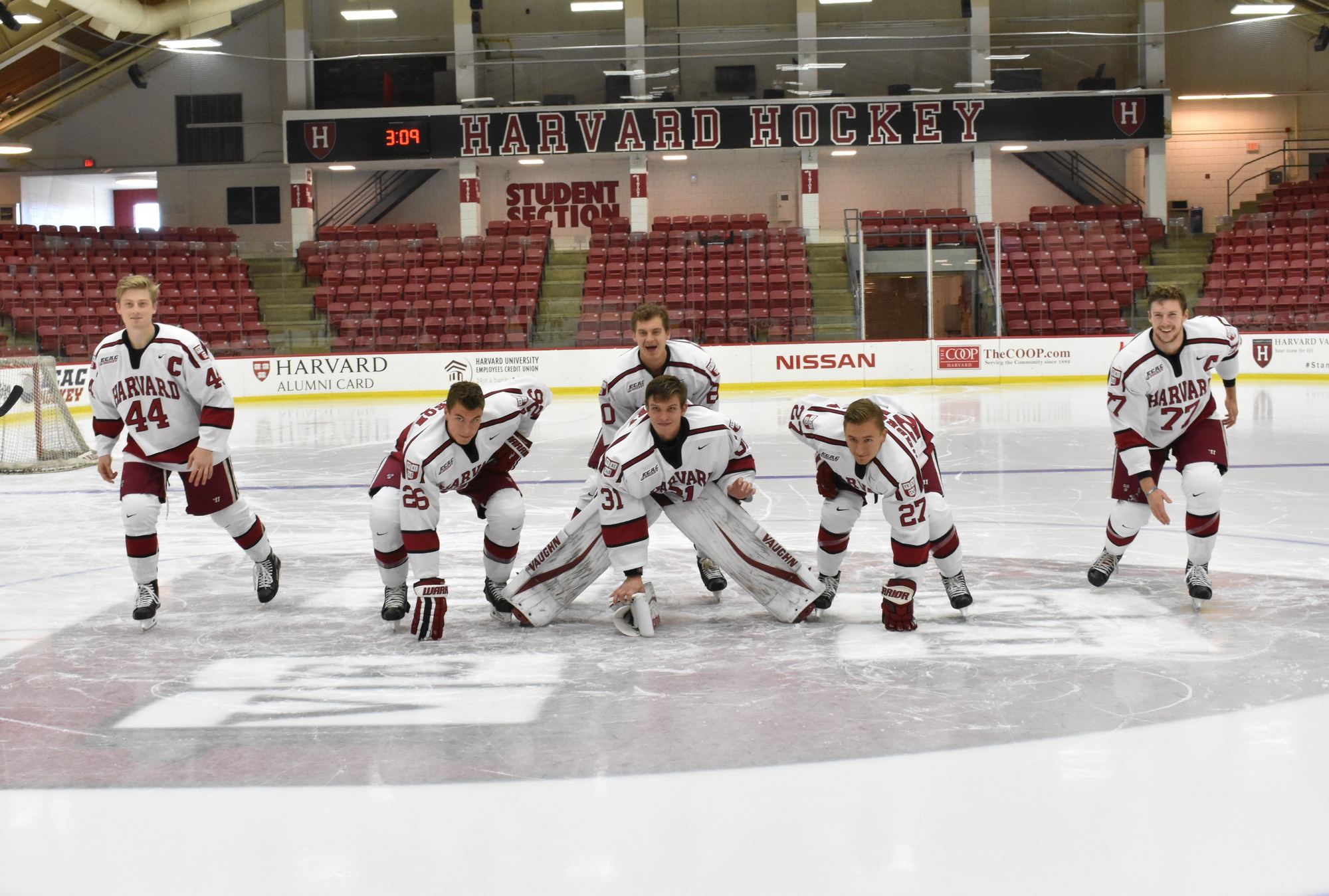 After shutting out the Bulldogs on Feb. 23, the Crimson honored its six seniors. Co-captains Michael Floodstrand and Lewis Zerter-Gossage comprise the nominal leadership but are flanked by classmates Adam Baughman, Viktor Dombrovskiy, Jacob Olson, and Lackey. The class of 2019 has won a Beanpot title, played in the Frozen Four, and will make its third NCAA Tournament appearance this week. 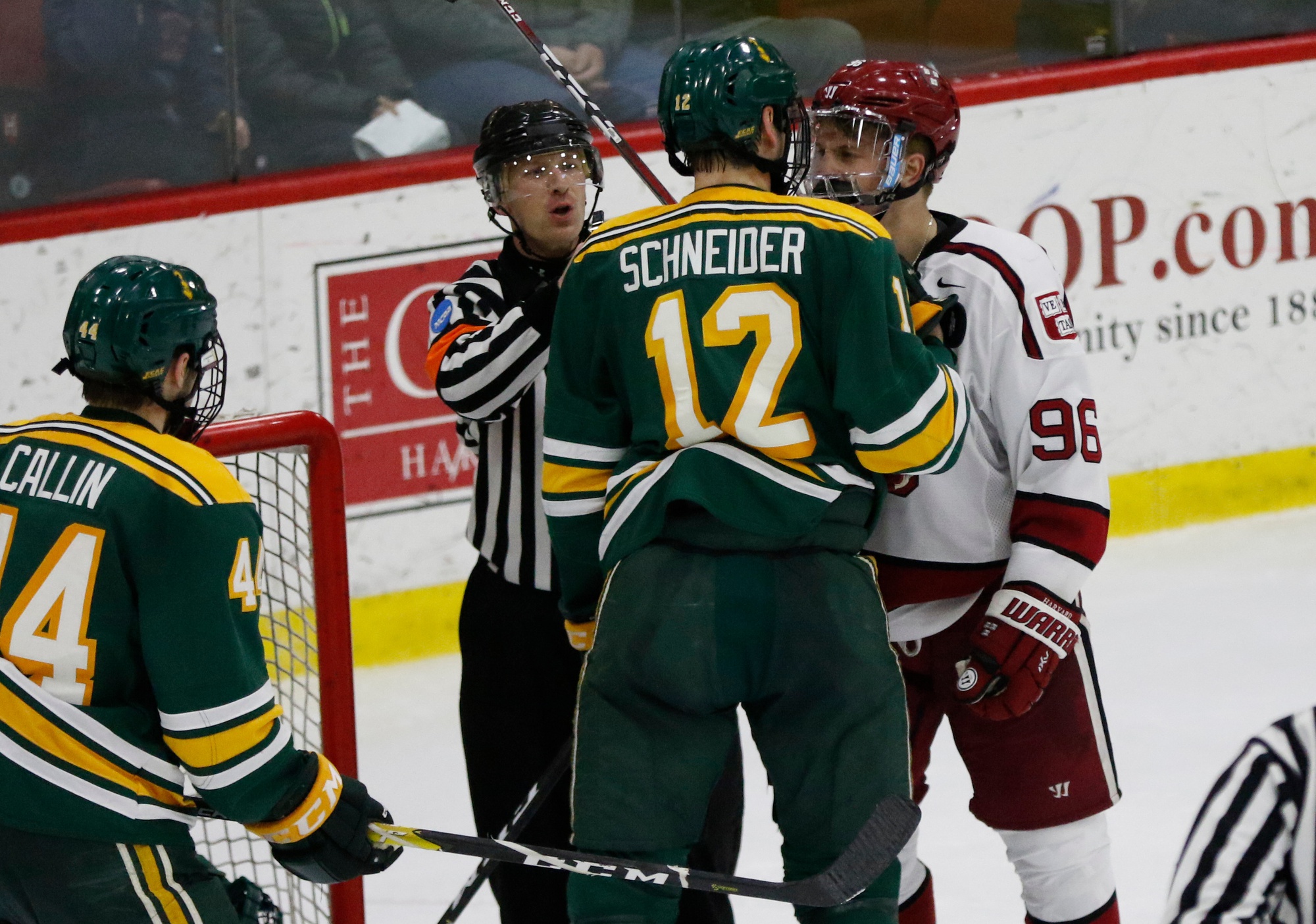 The regular season has come and gone. Harvard's 17-9-3 record was good enough to seize a top-20 USCHO ranking for the first time since November of 2017. A 13-7-2 slate in the ECAC earned the team a first-round bye in the conference playoffs, and a 2-0 sweep of Dartmouth in the quarterfinals sent the Crimson back to Lake Placid for the fifth consecutive season.

Despite a loss to Clarkson in the ECAC semifinal, the program made the NCAA Tournament and has drawn one-seed UMass in the Regional semifinal. Storylines from the regular season, such as the dazzling play of Hobey Baker candidate Adam Fox and the search for stability between the pipes, will likely persist into the national tournament.