The Crimson begins its road back to the Frozen Four on Friday afternoon with a battle against the one-seed Minutemen in the Regional Semifinals.
By Spencer R. Morris 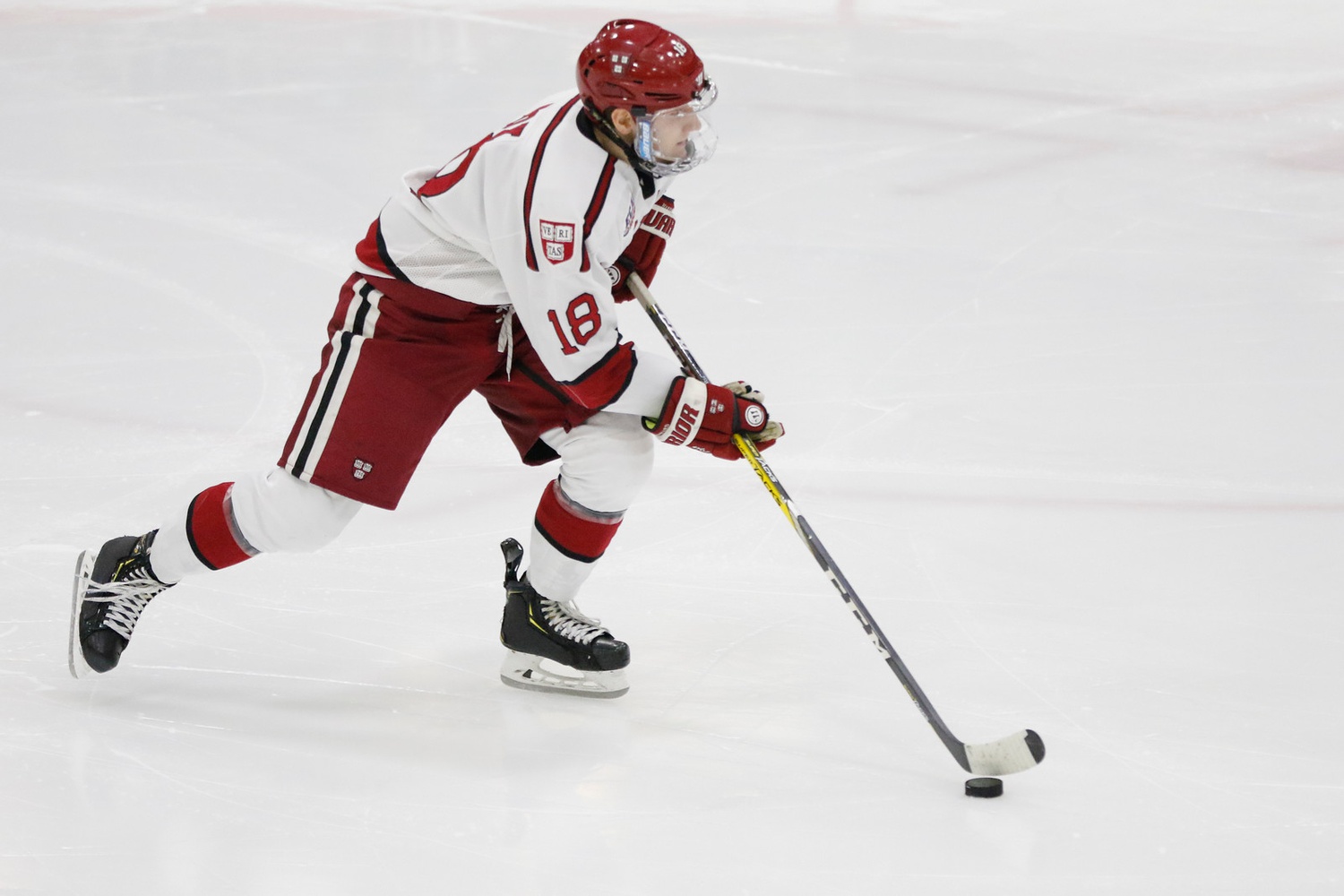 Junior defenseman Adam Fox will clash on Friday with another one of the NCAA’s elite blue-liners, UMass sophomore Cale Makar. Both rearguards are contenders for this year’s Hobey Baker Award, given to college hockey’s most outstanding player. By Timothy R. O'Meara

With most of the sports world focused on college basketball at this time of year for its annual on-court dramatics, the Harvard men’s hockey team will be looking for some March Madness of its own. On Friday, the No. 13/14 Crimson will square off with No. 4 Massachusetts in Manchester, N.H., in the Northeast Regional Semifinal of the NCAA Tournament.

Harvard (19-10-3, 13-7-2 ECAC), a four-seed in the 16-team bracket, returns to the big dance after missing out last season. Friday will mark the Crimson’s fourth Tournament appearance in the past five campaigns.

Meanwhile, the Minutemen (28-9-0, 18-6-0 Hockey East) enter the matinee matchup as a regional one-seed and will provide stiff competition for Harvard. UMass has enjoyed a stellar season under third-year coach Greg Carvel, who has resurrected the program from a decade-long rut in just a few short years, and returns to NCAAs for the first time since 2007.

“We start the season with the goal of winning the National Championship,” said Crimson junior defenseman Adam Fox. “It starts with getting to the Tournament, so it’s obviously nice to be going back.”

Friday promises to be a high-octane clash between two offensively gifted teams, each powered by an All-American defenseman and a lethal powerplay. If the Crimson fells the mighty Minutemen, it will advance to Saturday’s Regional Final and take on either Clarkson or Notre Dame, the two-versus-three matchup in the Northeast.

For both squads, Friday’s tilt is the first step in the road to Buffalo, N.Y., the site of the 2019 Frozen Four. But in some sense, each program has different stakes attached to this year’s NCAA Tournament. Harvard seeks another chance at the Frozen Four after bowing out to Minnesota Duluth in 2017’s national semifinal. UMass, on the other hand, is in search of its first-ever Frozen Four appearance.

“[The NCAA Tournament] is something that you could take for granted, having been there twice in my first two years,” said Harvard co-captain Lewis Zerter-Gossage. “But especially after last year, it made us seniors really want to get back there, being the leadership core on the team…. It’s all real now.”

A long and grueling season has brought Friday’s foes to the same place. But the Crimson and the Minutemen have experienced different roads to Manchester.

Coach Carvel’s group kicked off its schedule with wins in 12 of its first 13 outings, including a weekend split with then-No. 1 Ohio St. and a home-and-home sweep of then-No. 4/3 Providence. A hot start out of the gate saw UMass crack the top-20 rankings before the first month of the season had concluded. The team never looked back, making the top three its usual dwelling spot. A loss to Boston College in the Hockey East semifinal round was a small blip in an otherwise extraordinary campaign, as the Minutemen managed to clinch a top seed in the NCAA Tournament anyway.

“Obviously, they’ve had a tremendous regular season, Hockey East champs,” said Harvard coach Ted Donato ’91 of UMass. “[They’re] one of the top powerplays in the country, one of the top offenses in the country. They pose a lot of challenges for us, but we’re excited. It’s a whole new season.”

Success for coach Donato’s squad was not as immediate. The Crimson opened the season without a victory through four contests for the first time in its 111-year history. Team defense emerged as an early problem, with the group allowing seven, five, and four goals in its first three bouts.

The team finally began to find its identity and build consistency by mid-November, splitting a weekend series with ranked Arizona St. before pocketing a crucial triumph over Cornell, another Tournament team and a storied rival of the Harvard program, at Madison Square Garden.

The Crimson had firmly reentered the national conversation by mid-January, taking down then-No. 6 Quinnipiac and proceeding to build a four-game win streak heading into the Beanpot Tournament. While Boston’s hockey classic did not go Harvard’s way — the team settled for a third-place finish — an impressive seven-game home win streak guided the Crimson to its fifth straight appearance in Lake Placid for the ECAC Semifinals. Harvard’s conference playoff run ended there, but the team’s resume, spattered with high-profile wins, earned it an at-large bid to the big dance.

“We didn’t have the best start, and like all teams, we hit some bumps along the road,” said Crimson freshman center Jack Drury said. “We’ve gotten better and better throughout the year, and I think that’s a testament to our leadership and our coaching staff and the players we have on our team.”

Neither team would have enjoyed the success it did this season without the talent and leadership of its star defenseman. It is not only arguable, but quite commonly held, that the participating programs in Friday afternoon’s Northeast Regional battle possess the two most talented blue-liners in college hockey.

UMass boasts sophomore Cale Makar (15­–31—46), the frontrunner for this year’s Hobey Baker Award. The Calgary, Alta., native is perhaps the single greatest factor in the Minutemen’s turnaround from their dismal past, taking over games on a nightly basis. 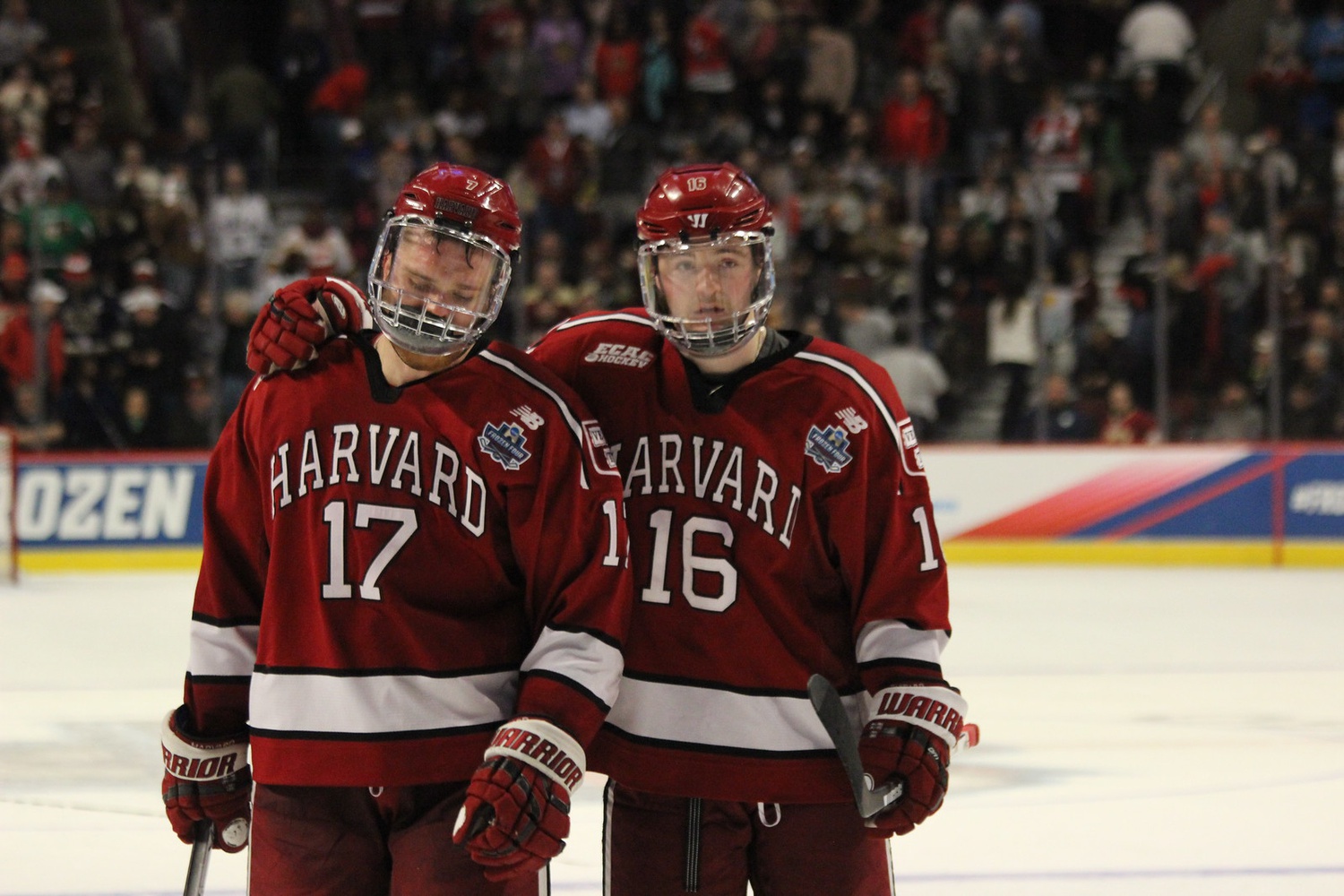 The last time the Crimson appeared in the NCAA Tournament, an impressive run ended in heartbreak. Then-sophomore Ryan Donato (right) and Sean Malone ’17 (left), a senior at the time, were speechless after falling to Minnesota Duluth in 2017’s Frozen Four. By Thomas W. Franck

Currently, Makar is the NCAA’s highest NHL draft pick, having been selected in the first round, fourth overall, by the Colorado Avalanche in 2017. And his blue-chip talent is fully on display: ahead of Friday, the sophomore ranks sixth in the nation in points and fourth in plus-minus (+29).

As his numbers suggest, Fox, a third-round NHL selection in his own right, commands the powerplay unlike any other player in college hockey. The two-time CCM/AHCA First Team All-American became the first rearguard since Wisconsin’s Justin Schultz in 2011-2012 to eclipse 100 career points as a junior. Moreover, he is two points shy of being the first Division-I blue-liner to register 50 in a season since the Badgers’ Brendan Smith did so in 2009-2010.

Thanks in large part to a six-point weekend against Dartmouth in the recent ECAC quarterfinals, Fox now holds the Crimson program record for most points by a defenseman in a single season, surpassing Hobey Baker winner Mark Fusco ’83 in the process.

In short, college hockey fans are in for a treat on Friday, as the two most dominant defensemen in 2018-2019 go head-to-head in the national tournament.

“Whether you’re a Makar guy or a Fox guy, I think you enjoy the fact that the two most dynamic offensive defensemen in college hockey this year…are facing off against each other,” coach Donato said.

Despite due focus on Makar and Fox in anticipation of Friday’s tilt, both teams have even more to offer. Two Minutemen forwards have notched over 40 points: senior Jacob Pritchard (16–29—45) and sophomore Mitchell Chaffee (17–24—41) sit among the top-20 scorers in the league. San Jose Sharks prospect John Leonard follows close behind with 36 (13–23—36).

On defense, freshman Marc Del Gaizo (12–14—26) rounds out the top pairing with Makar. Due primarily to this number-one duo, UMass is tied for first in the country in goals from its blue line (38).

Harvard, in fact, is next on that list, getting 31 goals from its back end in five fewer games than the Minutemen have played. Sophomore Reilly Walsh (12–19—31) and freshman Jack Rathbone (7–15—22) add to the Crimson’s cohort of offensive-minded defensemen. Apparently, receiving an offensive boost from the blue line goes a long way for overall team scoring, as both of Friday’s opponents rank in the top 10 in goals per game nationwide. UMass sits third in average scoring (3.76), while Harvard trails by just four spots (3.31).

An injection of talented freshmen, as well as the development of multiple returning skaters, has fueled the Crimson’s forward corps this season. Zerter-Gossage (18–6—24) is the team’s goal-scoring leader, setting the tone on the ice with crucial turning-point goals. The team’s nominal top line of sophomore Henry Bowlby (5–8—13) and rookies Drury (9–15—24) and Casey Dornbach (7–22—29) have combined to be the team’s most consistently effective trio.

“Our freshmen have been integral to our success,” coach Donato said. “We have a forward group that’s pretty young, but I think that they’ve made great strides throughout the year.”

“One of our strengths has really just been our depth up front,” Zerter-Gossage noted. “Once we get into our game, we’ve got a bit of a wave-after-wave style. And then our defense leads the charge, too, offensively.”

Both the Crimson and the Minutemen are exceptional on the powerplay. Harvard’s 28.8 percent execution rate leads the nation, while UMass is just a tenth of a percent back of first place at 28.7 percent effective. Fox and Makar are instrumental quarterbacks on the man advantage, and their respective special-teams units will make for another marquee clash on Friday afternoon.

“When we play our way, we prove that we can beat any team in the country, and we’ve done that this year,” said junior defenseman John Marino, who has experienced the last three seasons on the Harvard blue line right alongside Fox. “We’re a dangerous team coming into this tournament, and I don’t think…anyone wants to play us.”

In many ways, the Minutemen squad that the Crimson will face in the Regional Semifinals is a reflection of Harvard’s own style. Goaltending is yet another area of similarity between the teams, with both making late-season changes in net that make Friday’s matchup between the pipes a bit of an enigma.

While UMass sophomore Matt Murray (20-5-0, 2.11 GAA, .919 SV%) started the majority of games during the regular season, freshman Filip Lindberg (8-3-0, 1.67 GAA, .932 SV%) appears to have pried away the starting spot at the most crucial time of the campaign. Lindberg replaced Murray in the Minutemen’s first conference quarterfinal game two weeks ago and started his team’s next two games. But a shutout loss to the Eagles in the squad’s most recent game has potentially reopened the battle for the starting spot.

Given Gornet’s solid play in Lackey’s month-long absence, allowing the Crimson to remain in contention for the at-large NCAA Tournament bid it eventually received, it would come as no surprise for coach Donato to give the junior the nod on Friday.

“As much as I’m sensitive to the fact that somebody’s a senior…or somebody’s coming back from injury, I think we owe it to the group to play whomever we think gives us the best chance to win, and that’s at any position,” said coach Donato mid-week. “That being said, we’ll continue to evaluate. I don’t think we didn’t win against Clarkson [last weekend] because of our goaltending.”

Ultimately, two high-powered offensive squads are set to face off in a showcase of elite defensemen, top-tier powerplay units, and some of the finest collegiate hockey the state of Massachusetts has to offer. One team will keep its season — and national title chances — alive, while the other will say goodbye to a promising campaign. The beauty of the NCAA Tournament is that when the puck drops at 3:00 p.m. on Friday, either team can advance from the do-or-die game.

“Once you make the Tournament, it’s kind of a fresh start from there,” Fox said. “We’re not just going to bow down because they’re the one-seed and we’re the four-seed…. You have to just win four games, and it starts with this first one for us.”