Harvard bowed out of the national tournament to the one-seed Minutemen and in the process says goodbye to its six seniors and NCAA title hopes.
By Spencer R. Morris 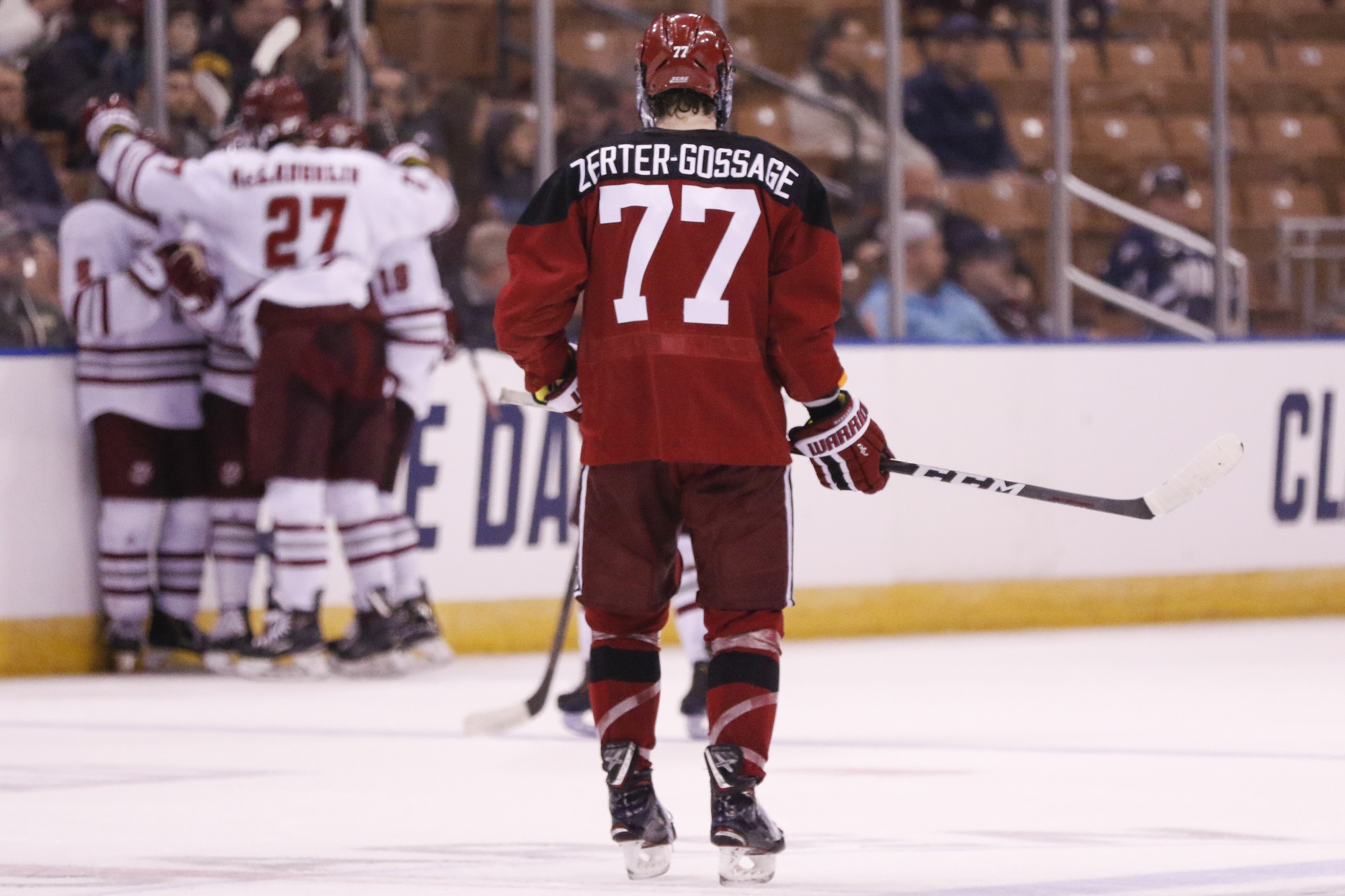 MANCHESTER, N.H. — Ahead of Friday’s NCAA regional semifinal matchup between the Harvard men’s hockey team and Massachusetts, the squads’ potent powerplays and point-producing defensemen stole most of the headlines.

But these factors were far from the most prominent themes in the No. 4 Minutemen’s 4-0 victory over the No. 13/14 Crimson. UMass (29-8-0, 18-6-0 Hockey East) thoroughly outplayed Harvard (19-11-3, 13-7-2 ECAC) and earned a spot in Saturday’s Regional Final in the process. It will face the winner of Clarkson and Notre Dame, the Northeast region’s other semifinal game, for a spot in the Frozen Four in Buffalo, N.Y.

“We had a gameplan that I thought our guys executed extremely well,” Minutemen coach Greg Carvel said. “Great to get the victory over a solid team like Harvard. It’s great for our program that hasn’t been to the NCAA [Tournament] in 12 years.”

As for the Crimson, Friday afternoon’s defeat marks the end of a bounce-back season that saw the team return to the NCAA Tournament after missing out last year. With the loss at Manchester’s SNHU Arena, the program’s six seniors conclude their collegiate careers having reached the big dance three times, including a Frozen Four appearance during their sophomore season.

“Probably the worst part about coaching is walking into that locker room when you know seniors have played their last game with a lot of their best friends, representing a school that they love,” Crimson coach Ted Donato ’91 said. “You love and respect everything that they brought to the team, and this group in general was a lot of fun to be around: very much a team, always stuck together, and I think because of it we were able to have some success.”

It took 35 minutes for the tilt’s first score — surprising, given the two offensively gifted teams involved. In the second period, the pace of play picked up immensely, with both teams trading chances in multiple high-energy sequences throughout the frame.

One such sequence culminated when UMass senior Kurt Keats strode into the zone and almost cashed in on a wrap-around attempt. The puck never left the area in front of Harvard goaltender Michael Lackey, though, and eventually rookie forward Anthony Del Gaizo punched it home. The long-awaited opening goal proved to be the decider on Friday afternoon. 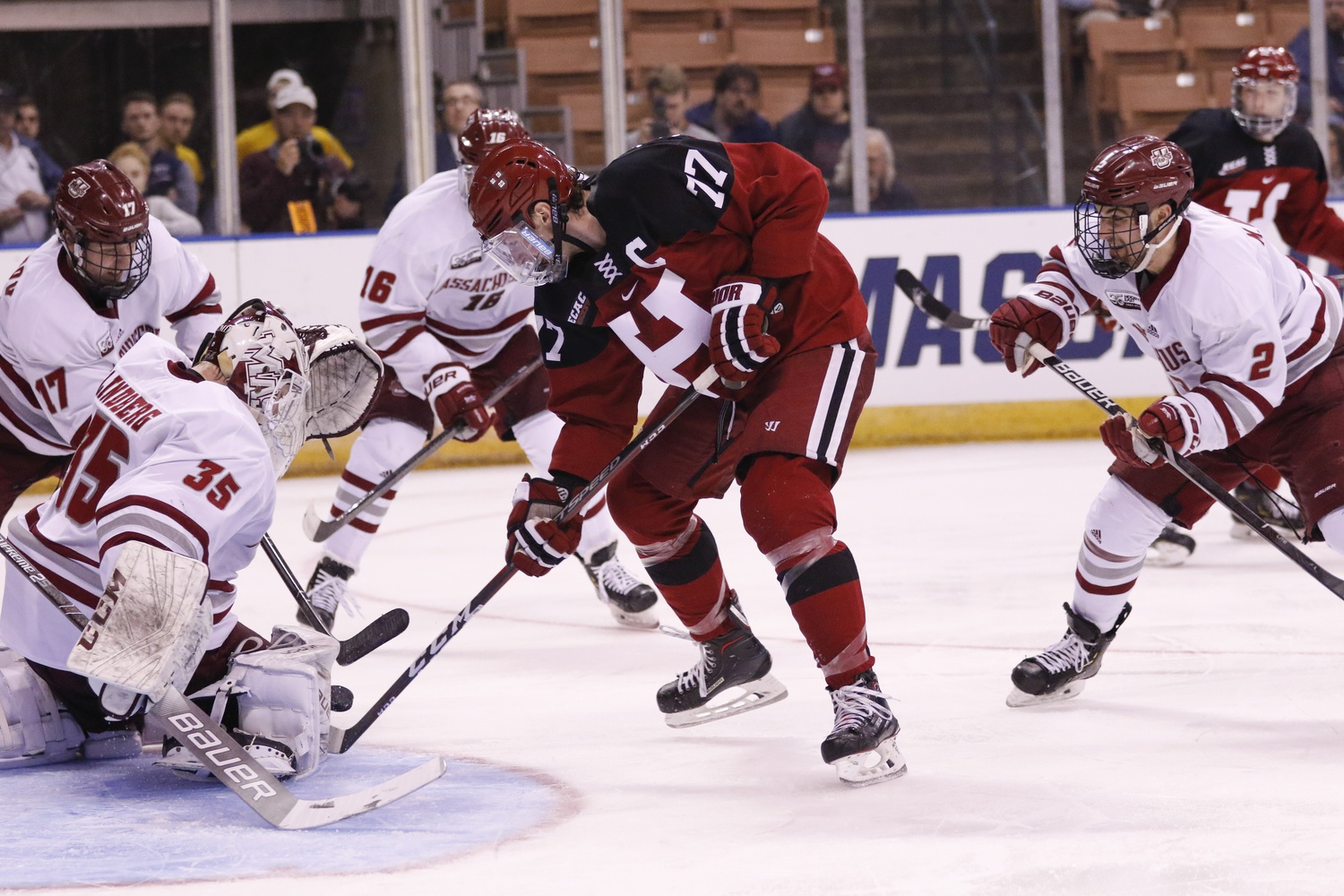 Co-captain Lewis Zerter-Gossage led the team with four shots and finished the season leading the team in goals (18). By Timothy R. O'Meara

“It looked like another one of those games where we were getting a lot of chances but just couldn’t get the puck in,” coach Carvel said. “But once we got one in, the pucks just started flowing in the net. I’m really proud of my group, they played extremely hard and played playoff hockey.”

Nine minutes into the third period, Minutemen senior Brett Boeing received a neutral-zone pass from sophomore blue-liner Cale Makar and found himself alone in front of Lackey. The forward made no mistake and buried a wrist shot over Lackey’s right pad, putting the dagger in the regional semifinal game.

The Minutemen applied heavy pressure on the forecheck all afternoon, regularly trapping the Crimson in its own zone and disrupting its breakout passes. UMass thus consistently carried play and finished the game with a shot advantage greater than two-to-one (36-17). This reality rendered Harvard’s comeback chances relatively bleak, especially after Boeing’s snipe.

“They were able to pin us in the zone too often, and then we were tired playing defense and weren’t able to go on offense,” said coach Donato regretfully.

In a matchup of offensive juggernauts, the masked men stole the show. Entering Friday’s bout, both teams ranked top-10 in the country in goals per game. Most notably, freshman goaltender Filip Lindberg posted a shutout for the Minutemen, continuing a spell of solid starts down the stretch this season. While UMass’ relentless forecheck and sturdy team defense limited the extent to which the Crimson tested Lindberg, the Finnish net-minder held firm when he needed to. 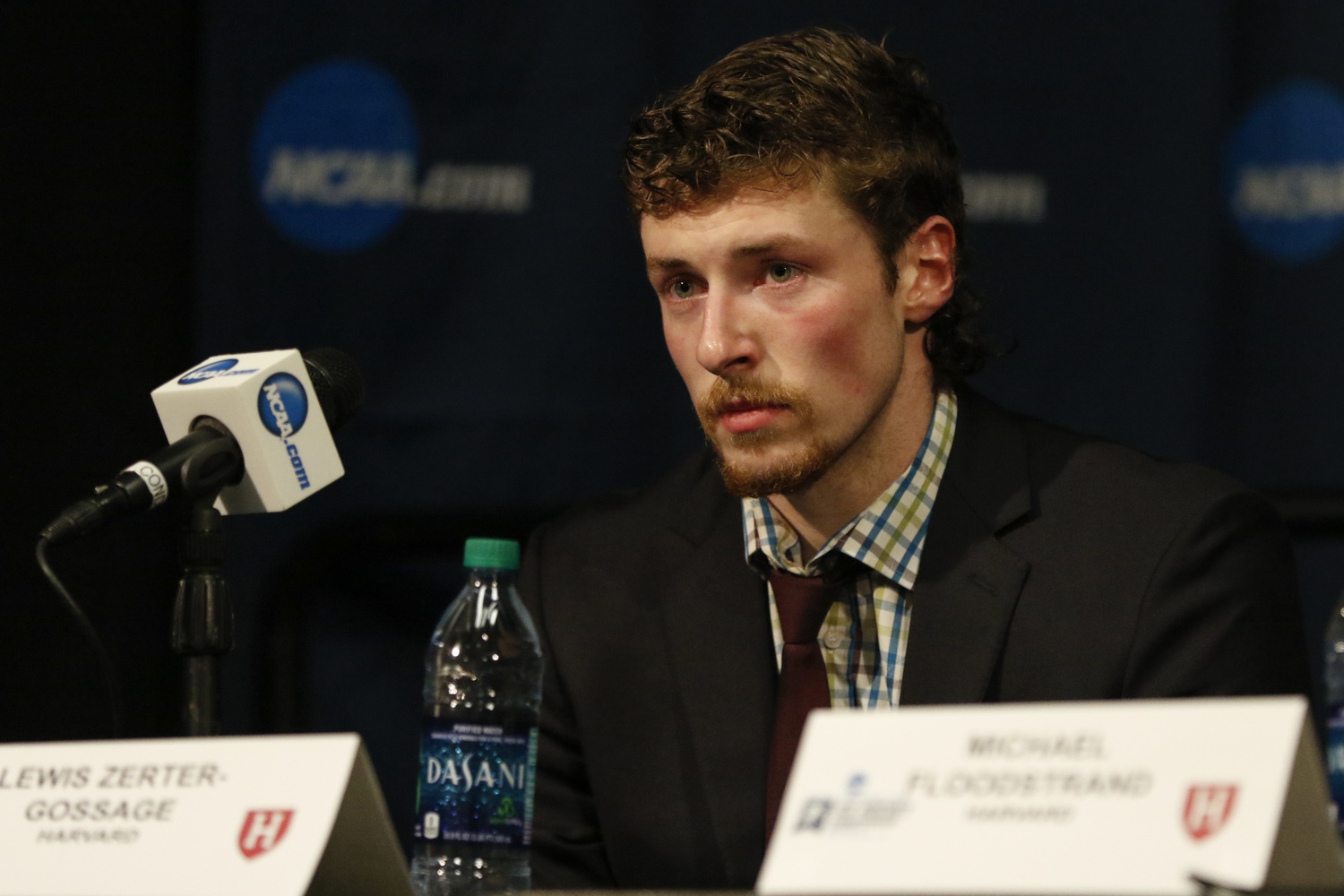 For Harvard, Lackey received the start despite his recent return from injury and a lackluster outing last weekend against Clarkson in the ECAC Semifinals. Prior to missing time for injury, the senior had become his team’s go-to backstop, and coach Donato felt confident returning to his number-one tender with the season on the line.

“I think Michael Lackey had earned the starting position, played the lion’s share of the games, didn’t leave the net because of poor performance, but injury,” coach Donato said. “I think our guys had a lot of faith in the way he played, and a lot of confidence…. I think he deserved to be the guy today, and he played like that.”

Lackey ceded three goals, but his play was more than good enough to give the Crimson a chance. As the Minutemen continued to dominate, the net-minder’s big-time saves kept Harvard in the game. 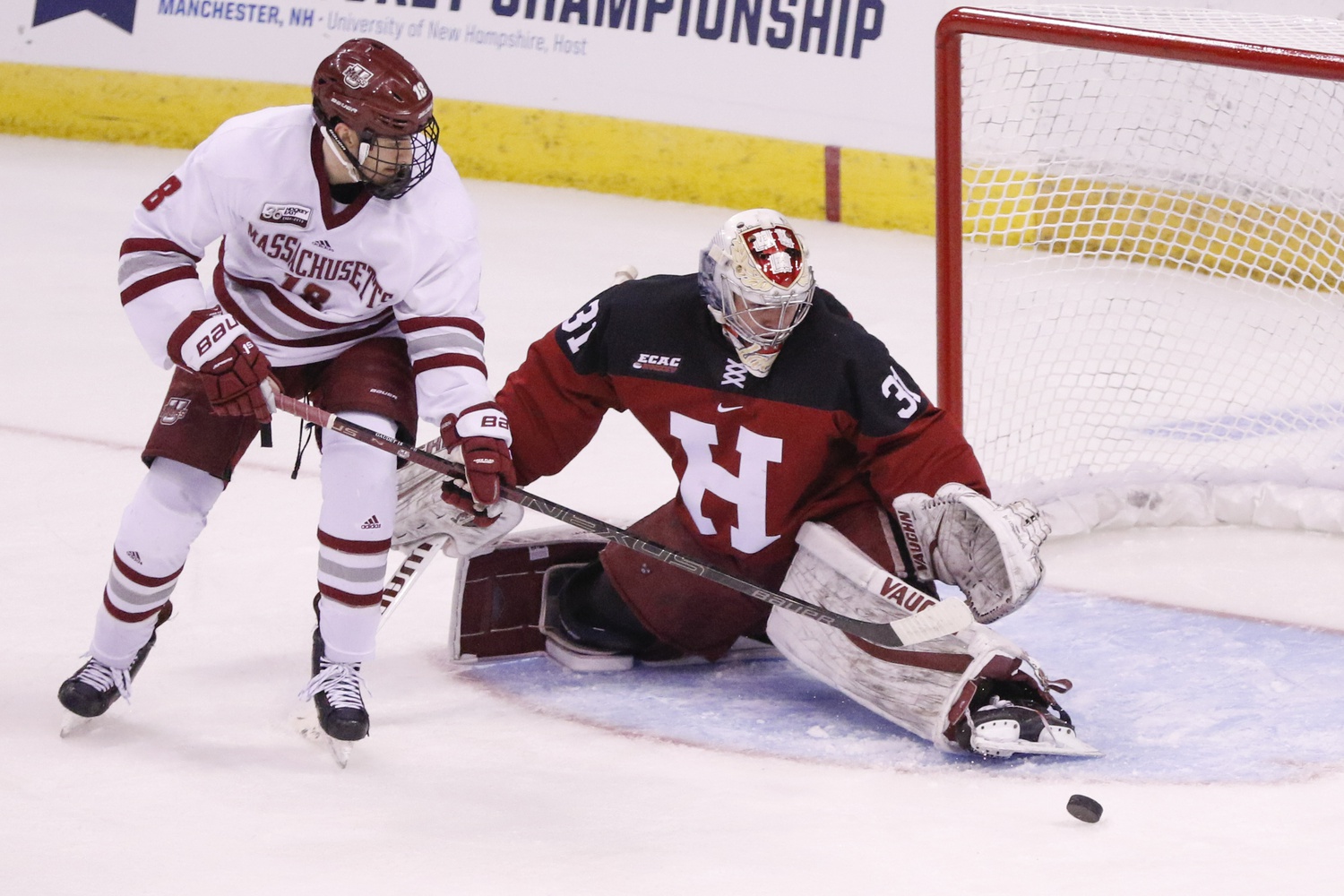 Senior goalie Michael Lackey turned away 32 shots on Friday, but in the end his performance was not enough to secure a Crimson victory. By Timothy R. O'Meara

The called-off goal to which Lackey referred: Harvard thought it cracked open the scoring just four minutes after puck drop. Junior forward Nathan Krusko threw a backhand shot toward the cage that beat freshman net-minder Filip Lindberg. The officials immediately waved off the goal, curtailing the Crimson celebration, and upon review of the play, freshman forward Wyllum Deveaux was deemed to have interfered with Lindberg.

The deflating verdict will be remembered as a turning point in the contest, as Harvard never mustered a goal — and UMass began taking over the game — thereafter.

“I think it was a little bit deflating,” coach Donato said. “It wasn’t like we were having all sorts of chances up to that point, but I think anytime in a game when you can get the first goal and maybe get a shot of adrenaline and grab momentum…. I think it probably helped them more than it hurt us.”

Minutes later, Harvard earned its first powerplay of the afternoon. But the best chance on the Crimson man advantage went in the Minutemen’s favor. Manning the point on the kill, freshman forward Bobby Trivigno picked off the puck at his defensive blue line and skated it the other way. In one of the tilt’s pivotal plays, Lackey stood tall, stopping the in-alone shorthanded chance.

So the opening minutes of Friday’s regional semifinal match provided plenty of action, even though neither team drew blood in the first period. UMass had already established its edge, with the puck spending more time in Lackey’s zone than in Lindberg’s, resulting in a 12-3 shot advantage for the Minutemen through 20 minutes.

One of the most intriguing elements of Friday’s matchup was the clash between college hockey’s two most gifted defensemen. Makar remains the favorite for the Hobey Baker Award, given to the nation’s top player, after displaying his well-rounded, pro-ready game against Harvard. In the second period, Makar showcased his skating ability when he hustled back to disrupt a breakaway chance from Crimson sophomore Jack Donato. 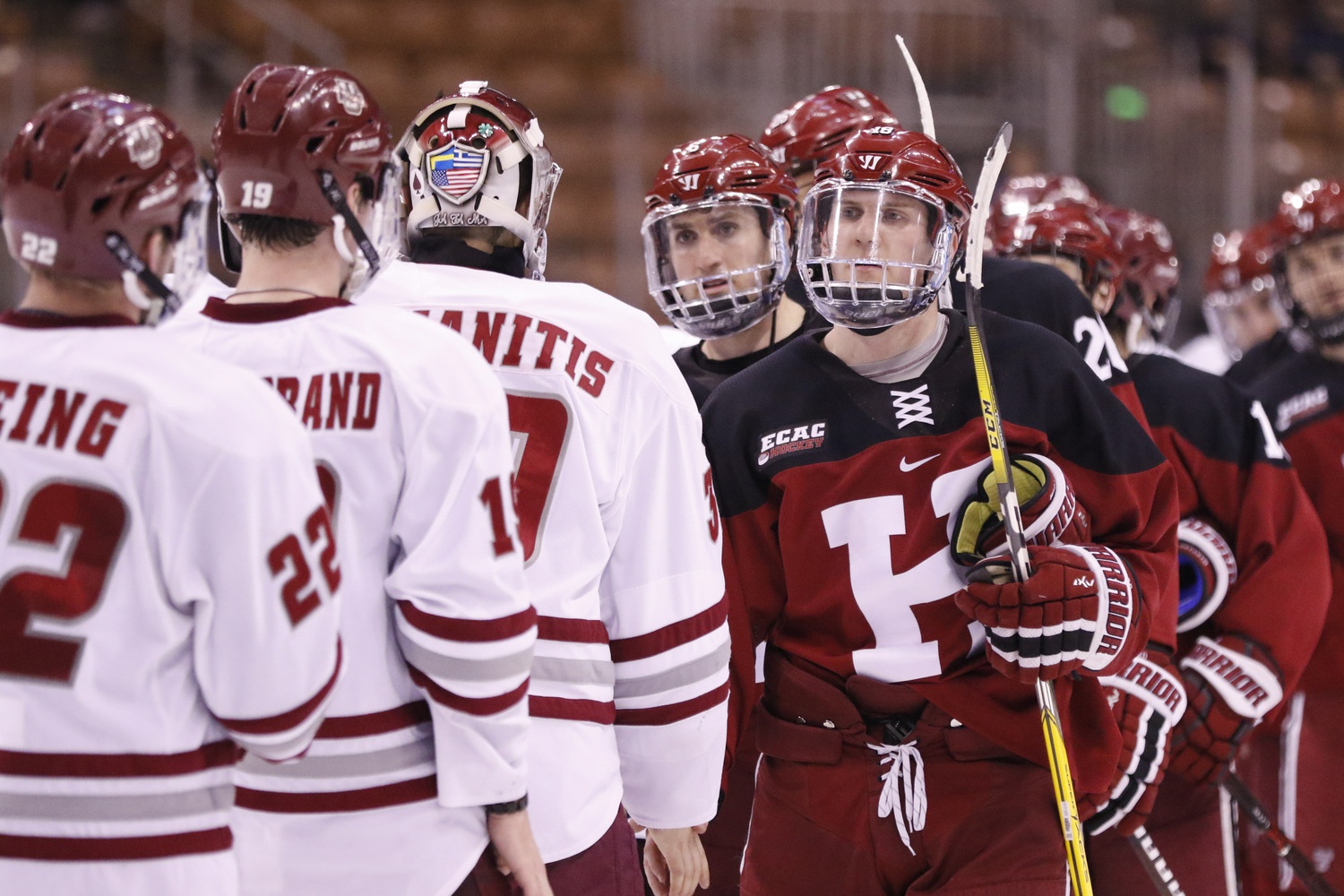 Junior defenseman Adam Fox (9–39—48) had a record season for the Crimson, leading the squad in points and assists. By Timothy R. O'Meara

Harvard’s Adam Fox, on the other hand, was held off the scoresheet like the rest of his teammates and was unable to dazzle with his brilliant offensive talents. Nevertheless, the blue-liner wraps up his junior campaign with 48 points (9­–39—48), a program record for Crimson defensemen, and remains one of Division I’s elite players.

Both of these point men quarterback their respective powerplays, the two most prolific special-teams units in the NCAA this season. But the man advantage did not play a role in Friday’s affair, with neither squad converting on its 5-on-4 chances. Rather, unyielding goaltending and the success of UMass’ fourth line defined the regional semifinal matinee.

Even after losing multiple impactful seniors to graduation, a relatively young Harvard team will look to retool and head back to the NCAA Tournament next season. A promising crop of incoming freshmen and the prospect of a new campaign, however, do nothing for the immediate sting of the Crimson’s shutout defeat on Friday afternoon.

“Anytime your season ends, it’s pretty tough,” said Harvard co-captain Lewis Zerter-Gossage. “Especially when you’re a senior and you know you’ve gone through everything…. The last few minutes of the game are something I haven’t really experienced, the emotions knowing that it is all coming to an end.”