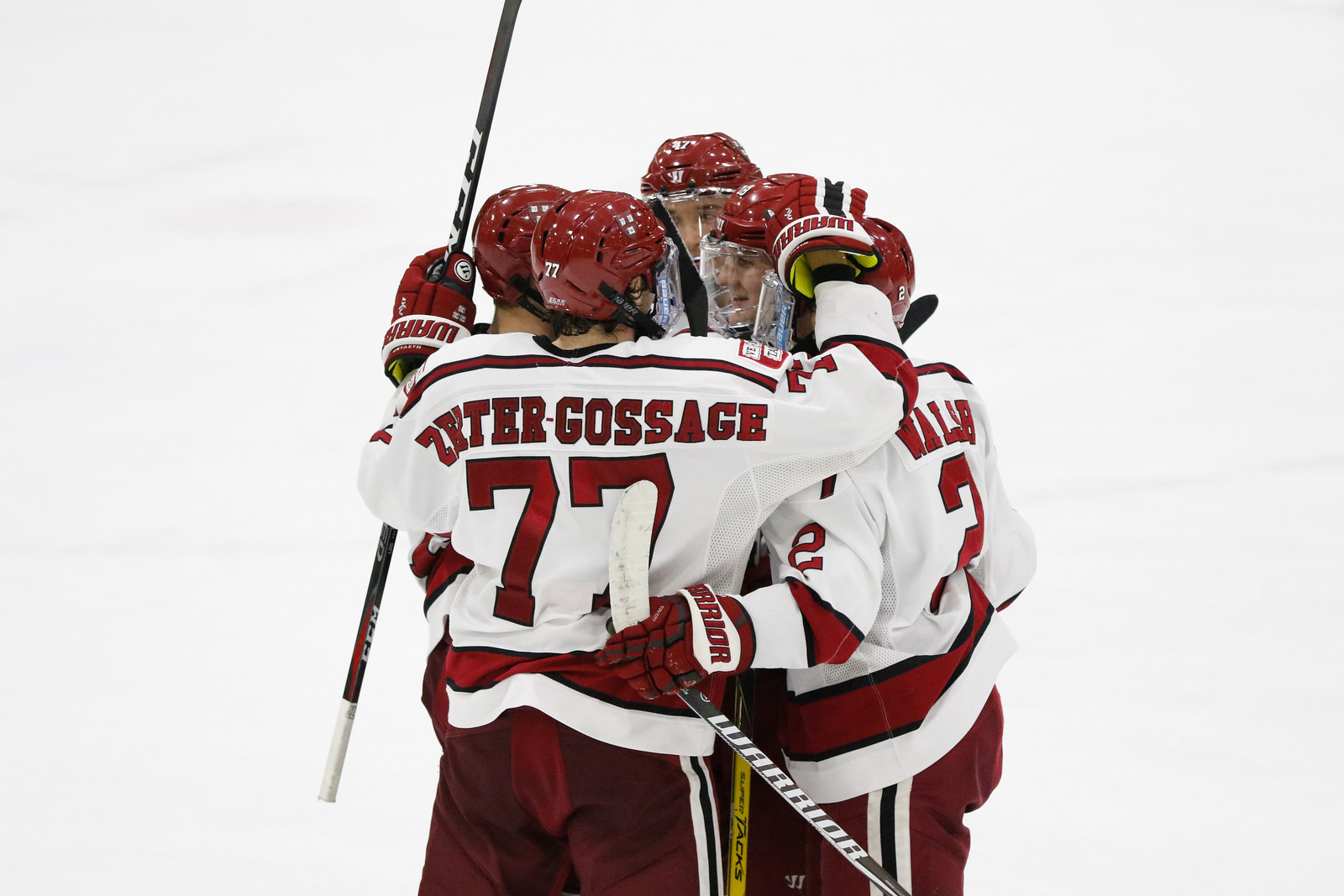 While the Crimson only captured two of the desired four standings points, importantly it has clinched a first-round bye in the ECAC playoffs. By Timothy R. O'Meara
By Spencer R. Morris and Stuti R. Telidevara, Crimson Staff Writers

The Harvard men’s hockey team entered the final weekend of its regular season needing just one standings point to lock up a first-round bye in the ECAC Tournament. And with some help from its fellow conference foes, the No. 16/15 Crimson (record) also had a chance to claim this year’s Cleary Cup, given to the regular-season winner of the ECAC.

With starting goaltender Michael Lackey still sidelined with a knee injury, coach Ted Donato ’91 would once again turn to junior Cameron Gornet between the pipes as the group trekked to Upstate New York for bouts with Rensselaer and Union. Harvard’s 4-1 victory on Friday did clinch the bye-worthy top-four finish, but a 4-3 setback the following evening held the squad firmly at fourth place at the conclusion of the 22-game conference schedule.

“We knew we needed...one point to secure a bye, but we also knew how big the weekend was for the PairWise,” sophomore defenseman Reilly Walsh said. “We battled hard and came away with a win [at RPI], so that was huge. But unfortunately, we couldn’t really play a full 60 against a pretty hard-working and solid Union team…. We did reach one of our goals, which was getting a bye in the playoffs, so there’s positives to take from that.”

During Saturday’s clash against the Dutchmen, the Crimson had much to play for: the top four ECAC teams all had a chance to nab at least a share of the Cleary Cup.

It took just under three minutes for Harvard to take the first step towards this regular-season title. Walsh opened the scoring, firing a shot from the blue line on a behind-the-net feed from sophomore forward Jack Donato. Union senior net-minder Jake Kupsky was well-screened and unable to stop Walsh’s attempt.

“I think we came out well,” said co-captain Lewis Zerter-Gossage. “This is a tough place to play and we knew that going in."

But the early goal was not an indicator of the result. Just as the Crimson jumped out the gate in the first period, Union bounced back in the middle frame. Tallies from sophomore defenseman Brandon Estes and senior forward Sebastian Vidmar — whose goal was his 100th career point — allowed the Dutchmen to take back the momentum and the lead in front of an excited home crowd. While shot volume had been nearly even through the opening period, Union held Harvard to just 3 chances in the second while putting up 13 of its own. The Dutchmen also had two powerplay opportunities that stanza.

“We definitely didn’t do our business in the second period,” Zerter-Gossage said. “That’s when they took over the game. We had too many lapses in the defensive zone that ended up costing us, not only giving them the momentum but also leading to the chances that eventually led to their goals, too."

Though the contest featured only one man-advantage goal, it proved a significant one: Union struck gold on a 5-on-4 at the beginning of the final period, its third straight goal. The game was starting to appear out of reach for the Crimson until Zerter-Gossage notched a tally from the net-mouth, bringing the score to 3-2. 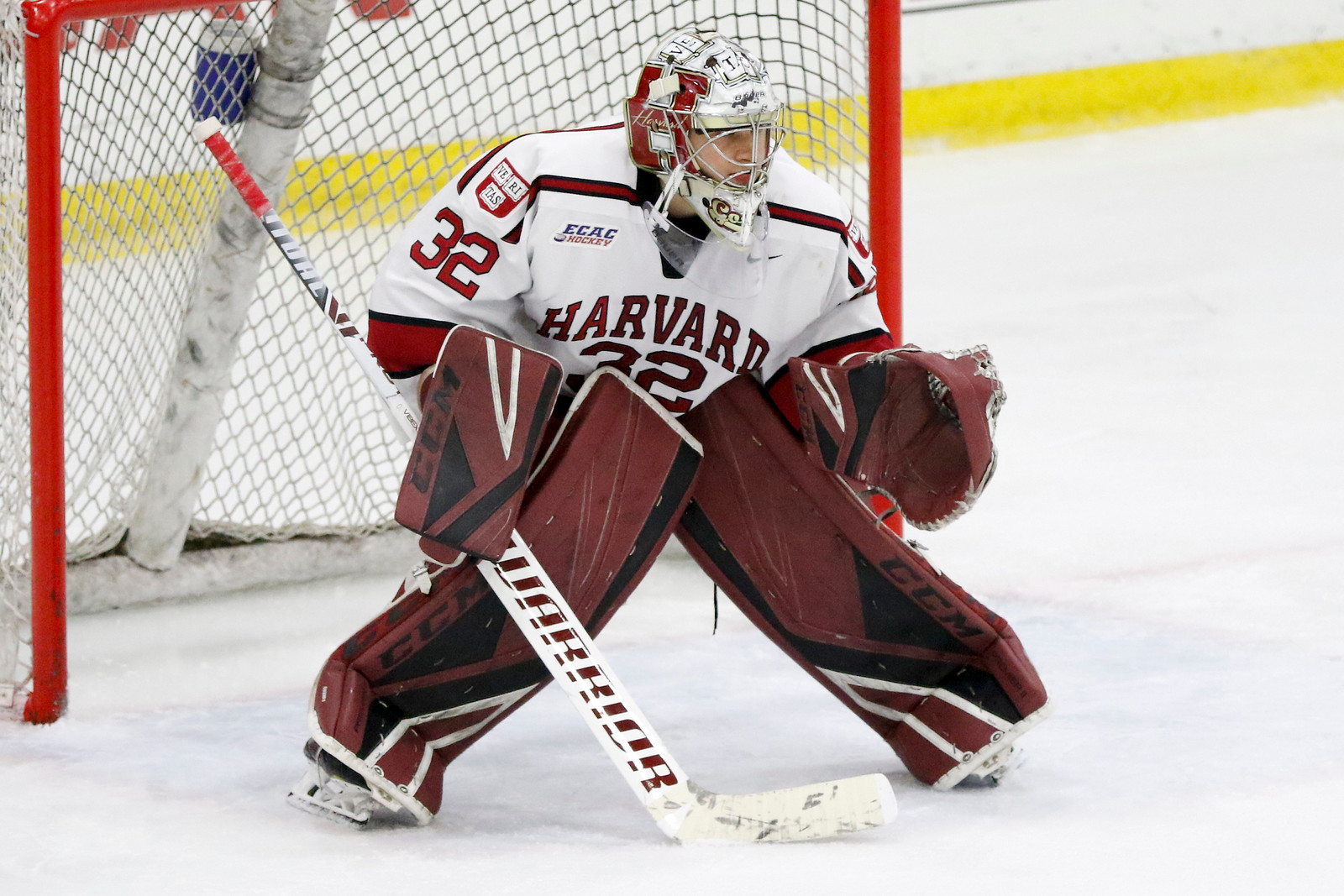 Junior Cameron Gornet has stepped up to fill the void in the crease left by an injured Michael Lackey. His play has maintained consistency for the Crimson, preventing the season from imploding down the stretch without the starting net-minder. By Timothy R. O'Meara

But at that turning point in the contest, the Dutchmen’s penalty killers made perhaps the most important stand of the night, successfully killing off a Harvard 5-on-3. Union added yet another goal soon after the kill, extending its lead to 4-2. A last-minute Crimson score came from rookie forward Wyllum Deveaux after the team pulled the goalie, but the hosts staved off any tying tallies.

“Whenever you have an opportunity like that, especially in crunch time when you’re down by a goal, it’s up to us to step up and take advantage of that opportunity,” said Zerter-Gossage about the 5-on-3 chance. “We were excited once we got the opportunity and we didn’t seize it. It’s definitely a blow to the team, but we gotta bear out next time we have that kind of chance.”

Friday’s matchup featured an unusual stoppage right before the second period began. With the Crimson trailing by a score after 20 minutes, a firm alarm went off, necessitating an evacuation from the Engineers’ Houston Field House. The team resorted to the bus while the situation in the arena was resolved.

Despite the odd circumstances, Harvard returned to the ice a new team for the remaining two frames, limiting the opposition to just eight shots in the second and third periods, combined.

“It was definitely really funny,” said Walsh of the fire alarm fiasco. “It actually kind of helped us...relax a little bit and kind of laugh some of it off, but then at the same time helped us dial it in. We had a really good second period. We took it to them. It definitely changed the course of the game — obviously, that may or may not have anything to do with the fire alarm.”

Freshman blue-liner Jack Rathbone’s goal 13 minutes into the middle stanza proved to be the game-winner. Zerter-Gossage retrieved a puck in the offensive zone, shuffling it to linemate Colton Kerfoot at the goal line. The junior forward found Rathbone’s tape through a seam, and the rookie rearguard buried a wrist shot near-side on RPI goaltender Owen Savory.

­­A common theme in the Crimson’s regular season, multiple freshmen carried the load offensively on Friday. In fact, four different first-years accounted for Harvard’s quartet of goals in the winning effort.

Forward Casey Dornbach notched the game midway through the second frame and also added an assist on fellow freshman Jack Drury’s third-period tally. In the waning minutes of the tilt, forward R.J. Murphy potted his second goal of the season — and the first true snipe of his career, given that his first collegiate goal came on an empty-net conversion in the Beanpot consolation game back in mid-February.

The class of 2022’s success this season manifests itself in the numbers. At the conclusion of the regular season, Harvard sits sixth in the NCAA in points scored by freshmen (86), while leading the nation in rookie assists per game (2.02) and ranking fourth in the country in points per game (2.97). The Crimson’s first-year group is particularly lethal on the powerplay, pacing college hockey in both assists and points while on the man advantage. 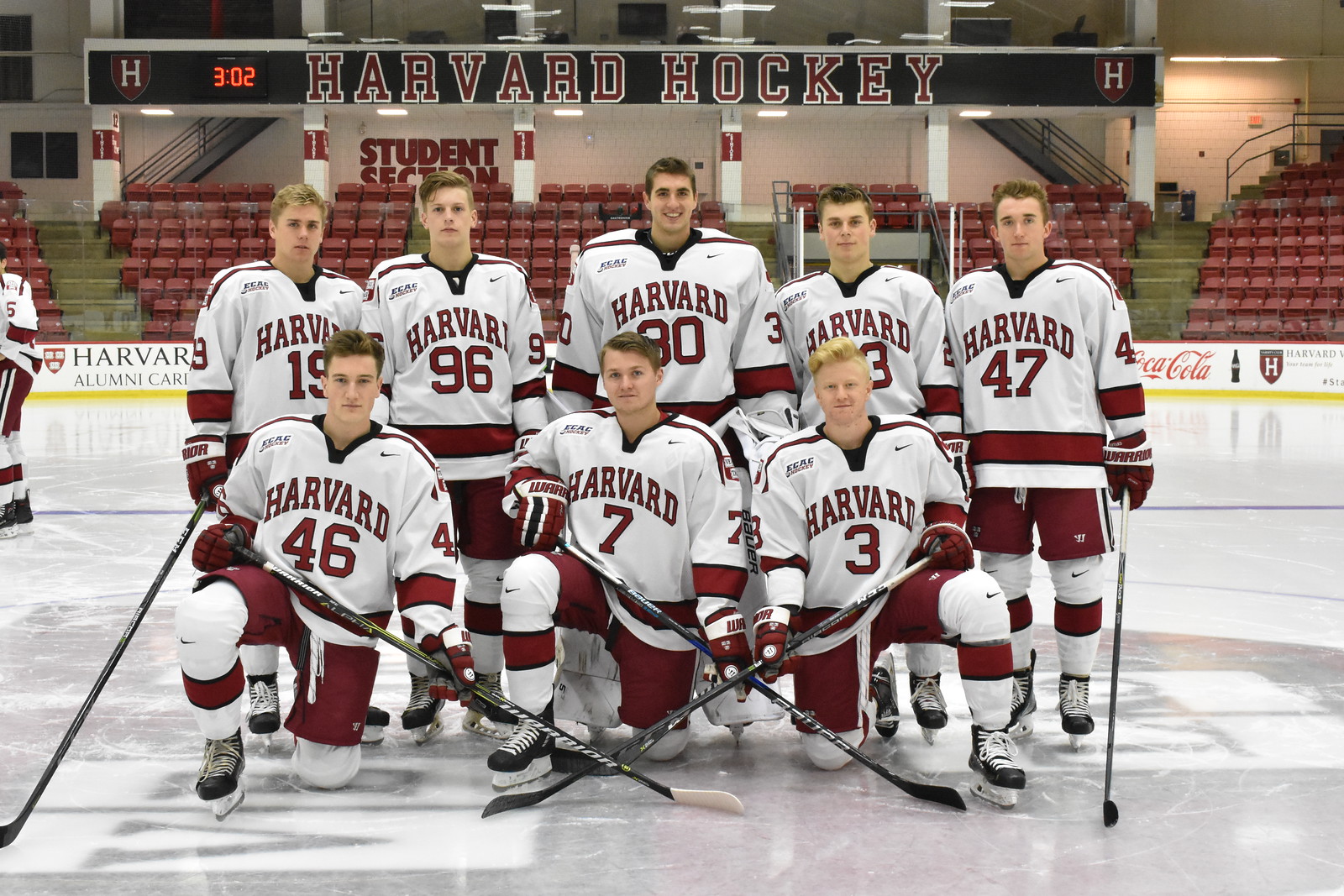 The Crimson's freshman class is among the most productive in all of college hockey. The group of first-years has helped the squad maintain its offensive prowess despite the loss of standout forward Ryan Donato to the NHL. By Amanda M. DiMartini

“We’re a fairly young team that has been seeing success from the freshmen,” Walsh said. “When it comes down to it, their class has been contributing at a really high level, and a lot of our offensive success is coming from them. I think it just goes to show you what our team has now, but what our will have in the future as well.”

Before the Crimson seized control of the contest, Gornet (1 GA, .950 SV%) did his part to keep his team in the game. The St. Louis, Mo., native made 11 of his 19 saves in the opening period, including a flashy glove save on Engineers forward Jacob Hayhurst, who had an in-alone chance after leaving the penalty box.

“[Gornet has] stepped into a big role for us,” Walsh lauded. “He’s done very well, making saves that he needs to, and even bigger saves. He’s definitely given us some confidence back there, too, and without him, we might not be in some games that we’ve been in. He’s done a really good job stepping into a role that’s very important when trying to make a playoff push.”

Harvard’s first victory at RPI since the 2014-2015 campaign provided the necessary standings points to assure a top-four finish. Hence, the Crimson will be off next weekend, as the team regroups from its 1-1 outing in Upstate New York and Lackey continues to rehabilitate from the injury that has sidelined him for four games now.