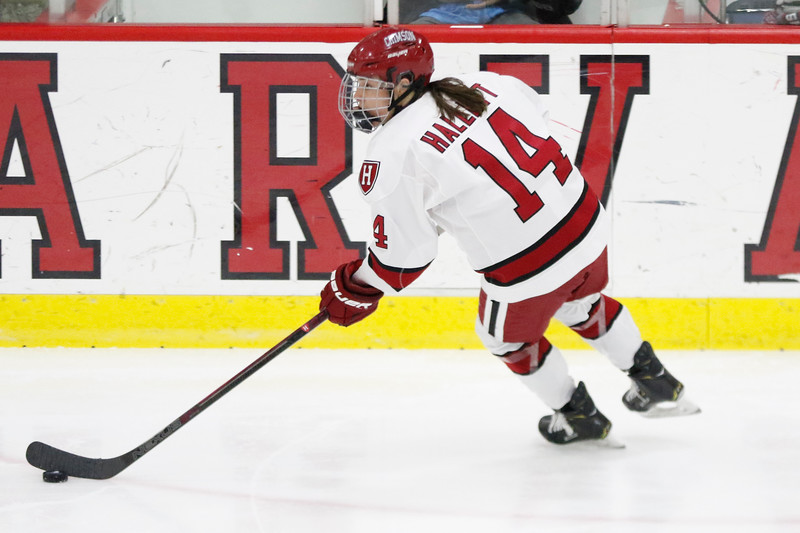 Senior co-captain Kate Hallett controls the puck in what ended up as her final game for the Crimson. By Timothy R. O'Meara
By William C. Boggs and Connor J. Wagaman, Crimson Staff Writers

A fast start to the first from Colgate was bookended by a fast close from the Raiders, a single Crimson goal from freshman forward Dominique Petrie resting between these boundaries of Colgate domination.

Not even four minutes into the start of the contest, freshman forward Eleri MacKay went five-hole on freshman goalie Lindsay Reed, off a pass from her identical twin, freshman forward Delani MacKay. From there play was even for the next few minutes, the back-and-forth broken up only by a spectacular Reed save here and there.

Then, just past the period’s midpoint, Petrie skated the puck down the left side. She swerved to the middle and shot, hitting just inside the right post to put Harvard on the board to tie the game, just as she accomplished Saturday.

A post-clanger from a Raider at 15:15 prevented the Crimson from falling into a second hole, but luck did not continue to favor Harvard. Less than a minute later, Colgate tri-captain Jessie Eldridge — whose 14-game point streak ended Saturday — followed through on a rebound to start a fresh streak.

With fewer than 30 seconds left in the first frame, another Eldridge shot struck true, this time off a down the ice skate-and-shoot. Racing down the right side of the ice, she bypassed the centering pass option to rip the puck past Reed. The period closed out with the Raiders up, 3-1.

In a season that has seen the Crimson rest heavily on phenomenal play from Reed — whose save percentage hovers just above .940, good for top-three in the country — the first period of the final contest of these ECAC quarterfinals exposed some chinks in the armor. In that initial frame, Reed gave up three goals on 15 shots from Colgate.

Reed returned to form for the second period, holding the Raiders to no goals on 12 shots. A near-goal by sophomore forward Becca Gilmore sailed wide, and Harvard could not score on any of its eight other shots. Both sides failed to convert power plays, holding the Crimson to 0-3 and Colgate to 0-2 on scores during the advantage through the first two periods.

The season-deciding final frame opened with a 3-1 Raiders advantage — Harvard playing comeback, and Colgate playing lead-keep. Following a penalty on sophomore forward Brooke Jovanovich, the Raiders transitioned to lead-expand. Just 1:47 into the third, Eleri MacKay hit home to give a second Colgate skater her second goal of the game.

Ten minutes later, taking advantage of another penalty on Jovanovich, Eleri MacKay struck again to give the Raiders the 5-1 lead. The puck, fired from just past the blue line, skirted by Reed and swept around the inside of the net for Eleri MacKay’s first collegiate hat-trick.

Harvard looked to maybe catch a break with 3:32 remaining, as officials stopped the game to take a second view of a try from Petrie. The attempt, though, was ruled no good. Twenty-one seconds later, Petrie avenged that ruling to add a second Crimson goal.

Harvard vied for a third to move closer to forcing overtime, but time expired. For the third time in three consecutive quarterfinal matchups, Colgate had topped the Crimson to head to the ECAC championship weekend.

Although the Harvard season will be coming to an end, the squad has plenty of momentum to build off heading into next year. Partway through January, the Crimson found itself 5-11-2. From that moment, however, Harvard would finish 7-4-2, with all four of its losses coming against top-ten teams.

Along the way, the Crimson rattled off a six-game unbeaten streak and appeared in the Beanpot Championship after a stunning upset against Boston College in the semifinals — a match that saw Reed turn in one of her many 50-plus save performances.

While the team will be losing critical leaders in its four seniors, a strong core of younger players will be returning, including junior forward Kat Hughes (who scored twice in the 5-2 win over Colgate), Gilmore, freshman forward Kristin Della Rovere, Petrie, freshman defender Kyra Willoughby, and Reed, just to name a few of the many pivotal contributors that will be back in uniform playing Harvard hockey.The seniors — co-captain and forward Kate Hallett, co-captain and forward Lexie Laing, forward Bradley Fusco, and defender Kaitlin Tse — will be missed, but they undoubtedly left the program in a better place.