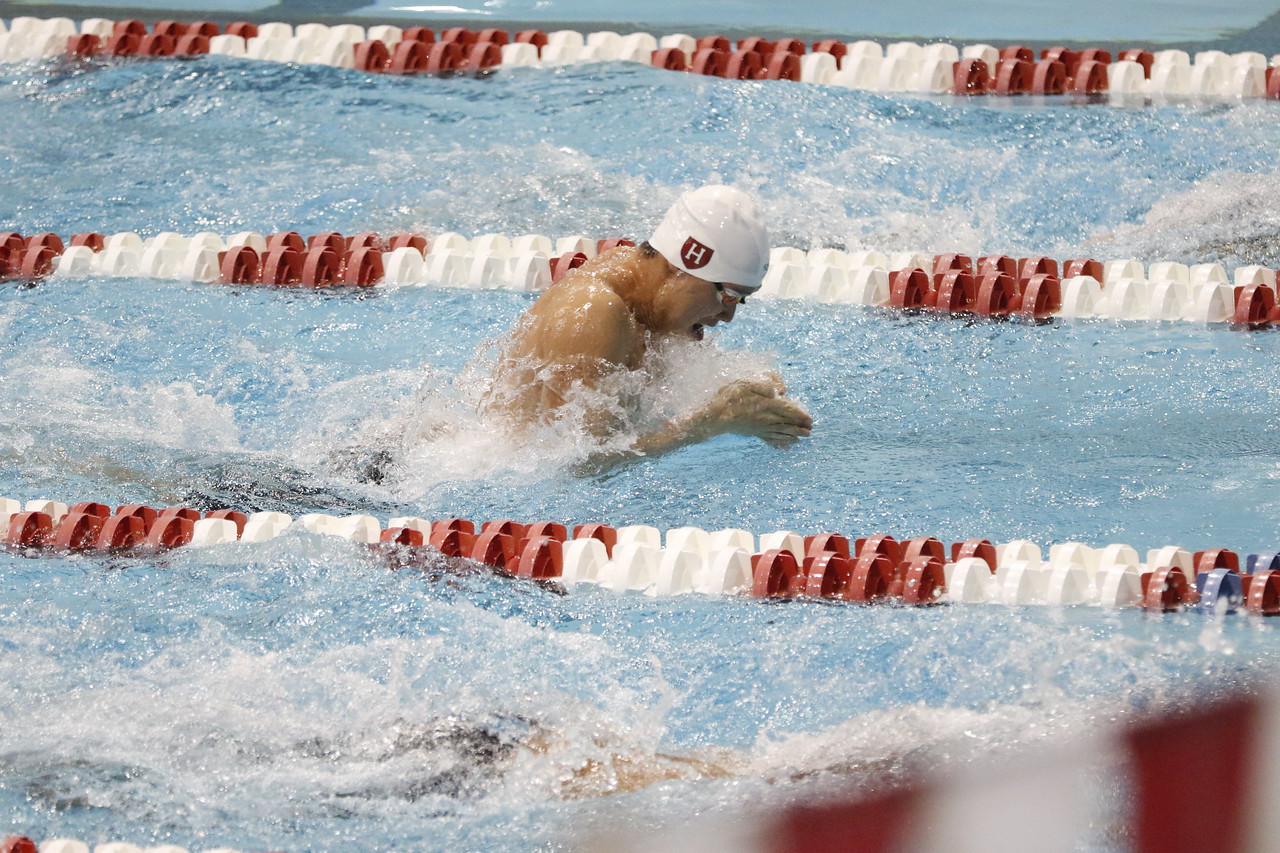 Down in Providence, competing for the Ivy League Championship, Harvard men’s swimming and diving captured its third consecutive Ivy League Championship this past weekend, clearing the second place team by 223 points. This championship marked their fourth in the past six seasons and capped a dominant season within the league. The Crimson team was particularly strong in relays and individual events, surpassing the field and setting records on the way.

The Harvard squad went 8-1 over the course of the regular season, falling only to a No. 12 ranked Georgia team. However, the Crimson completed the sweep against Ivy League opponents, going 7-0. With high expectations going into the competition, many within the team appreciated the success, but had an eye toward NCAAs.

“Obviously it’s a great feeling to win Ivies for the third year in a row, but I think the most exciting part is how well we are set up now going into NCAAs,” captain Brennan Novak said. “Our goals at the beginning of the year were not just to win Ivies, but to place higher nationally as well. We have more people qualified for the meet than we’ve had in a long time and I am excited to see what we can do there.”

Harvard swimmers set multiple school records throughout the tournament. The four man team of junior Dean Farris, junior Daniel Chang, freshman Umitcan Gures, and junior Raphael Marcoux broke the school record in the 200-medley relay with a time 1:24.33, crushing the previous time by three seconds. They outkicked a strong Penn team to grab the win in the event.

Later that day the four man team of Farris, Novak, and sophomore pair Mahlon Reihman and Corban Rawls rewrote the record books again, finishing the 800-medley relay with a time of 6:15.38. This quartet blew out the competition beating the second place team by over nine seconds. Both record setting teams qualified for NCAA A standard in their respective events.

Novak had a dominant showing over the course of the tournament, capturing first place in the 500-yard freestyle, making the cut for an NCAA B standard in the event while winning the event for the third time. Later on in the Championship, Novak captured the win in the 1,000 freestyle with a time of 8:47.78. Finally to end his last Ivy league Championship, Novak crossed the finish line first in the 1,650-meter freestyle, going back to back in the event.

The 200-yard medley saw two school records broken. In the prelims, sophomore Michael Zarian clocked the best time in the history of the program. In the following finals, freshman Jake Johnson also broke the school record. Johnson continued his strong performance with a school record in the 200-yard butterfly, finishing a strong outing for the freshman.

To end the second day, Marcoux, Gures, senior Grant Goddard and Farris won the 200-freestyle relay, qualifying for the NCAA A standard with a time of 1:17.73. Sophomore Alex DiCaprio was Harvard’s top overall diver, finishing in sixth overall.

The story of the end of the tournament was the individual performance of Farris as he dazzled the crowd, swimming the fastest NCAA Division I time in the 200 freestyle with a time of 1:30.83, passing the previous top time by .03 seconds. This time was a pool, school, and tournament record, capturing his third Ivy title in the event. Less than a half an hour later, Farris did it again, crossing first the win in the 50-yard freestyle, winning this event also for the third time in his illustrious Ivy league career. Farris ended his championship weekend by setting a school record and the Ivy record in the 100-yard freestyle, making the NCAA A cut with a time of 41.42.

Novak and Farris were dominant throughout the event and both deserved their High Point Swimmers awards for the weekend. In addition, Novak took home the career High Point Swimmer award, displaying how integral the captain has been to the team success over the course of his career.

This win means that both the men’s and women’s swimming and diving team won the Ivy League Championships this year. This is the third time this has happened in the past six years, a testament to the strength of the culture across the entire program over the last decade.

Harvard has many swimmers qualified for the NCAA Zone diving championships in early March, and will look to continue their momentum going into the tournament.