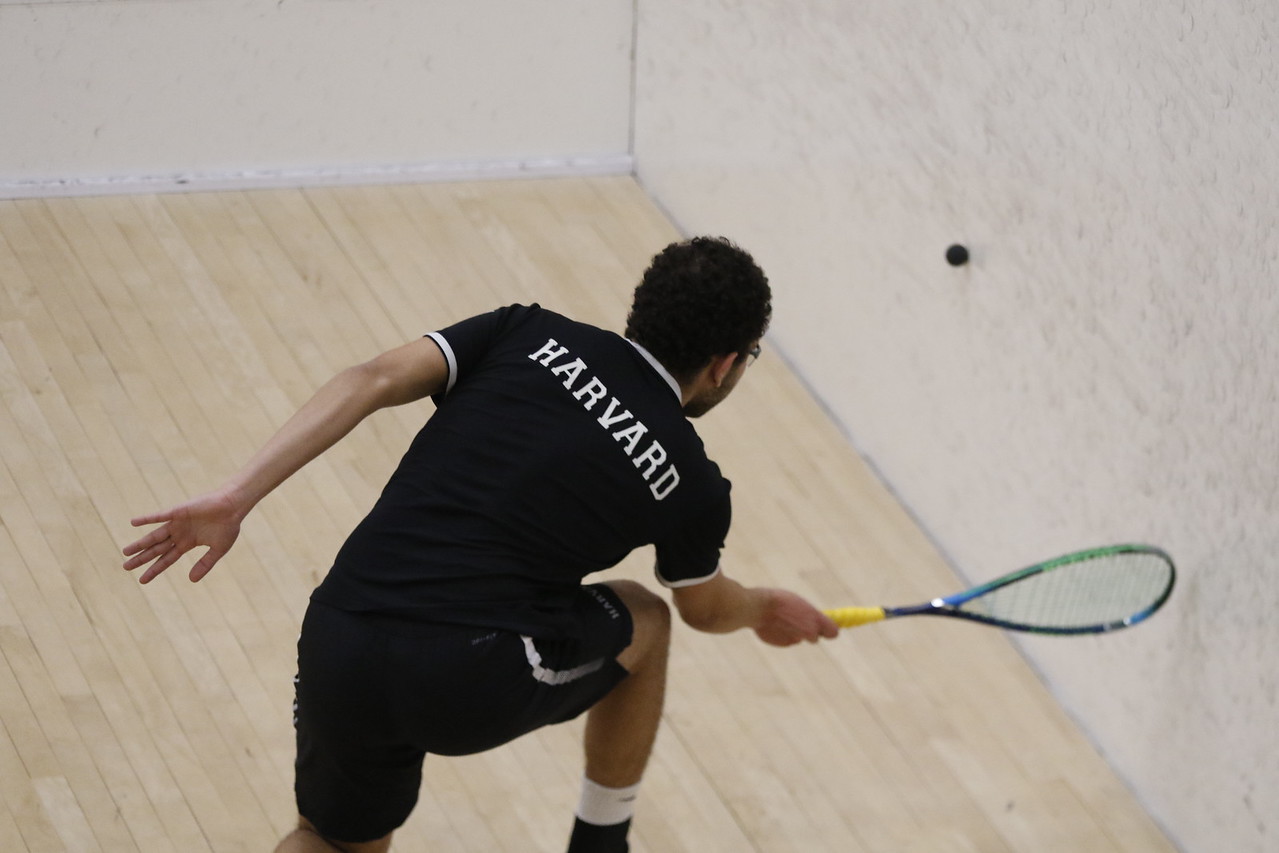 “It is a testament to the coaching staff,” sophomore Sam Scherl said. “It really comes down to the coaches and the captains, and it is incredibly rewarding and exciting to be a part of a program that’s experiencing such success.”

Four players from each team were in the top draw of the tournament, a demonstration of how dominant the Harvard teams have been this past season. Since Harvard had four out of the sixteen players in each tournament, there were realistic hopes that a Harvard player would bring a trophy home.

“There was definitely hope a Harvard player would take it all home, but because we are all so evenly matched, anyone could have won the title,” Gina Kennedy said. “It was a serious challenge and super exciting to have both Harvard players bring it home.”

Kennedy was the third seed of her draw. In the opening match, she beat Trinity’s Salma T. Alam Eldin in a fairly decisive 3-0 match. She unfortunately faced her teammate, Amelia Henley, in the second round. Kennedy remained steady and focused, as she was able to pull out another 3-0 victory. The semifinal match was against Penn’s Reeham Sedky. After falling in the first game, 11-9, Kennedy retained her composure and won the following three games, defeating her opponent 3-1.

“I was elated because I was really not expecting to win that match,” said Kennedy. “On paper, the semifinal match was the most difficult match for me, so I didn’t want to put in all that effort into that match and then not win the finals.”

Gina was able to successfully use the impressive win in the semifinals as motivation in her final match.

“I just did my best to stay calm and not get too excited about potentially bringing it all home,” Kennedy said. “I knew it was such a good opportunity for me to take home the title after winning the semis, but it was going to be such a challenging match, so I was really just trying to stay focused.”

Just moments before Kennedy took her court in what would result in her second Ramsey Cup, teammate Victor Crouin exited his court with his first Pool Trophy.

“In my final match I was playing against the number one player from St. Lawrence. I knew I had to play my best; he’s one of the best juniors for his age,” Crouin said. “But during the match, I was relaxed and calm and in a good state of mind. I didn’t give him any opportunities to get a strong lead.”

“It definitely was not obvious I was going to win, especially since during the season I lost to the number one and the number four seed,” Crouin said. “But I really just enjoyed my time playing of course, and was able to bring it all home.”

The convenient location of the tournament at Brown University was particularly helpful for both players, as they were able to be physically supported by their all of their teammates.

“Everyone who wasn’t in the tournament, men and women, all traveled to Brown to watch both of us play,” Kennedy said. “It was just really amazing to share it with everyone.”

For both players, it was the support of their teammates that really made their victories special.

“I just was so happy because everyone on the team came up from Harvard to watch,” Crouin said. “I felt so fortunate to have everyone behind me.”