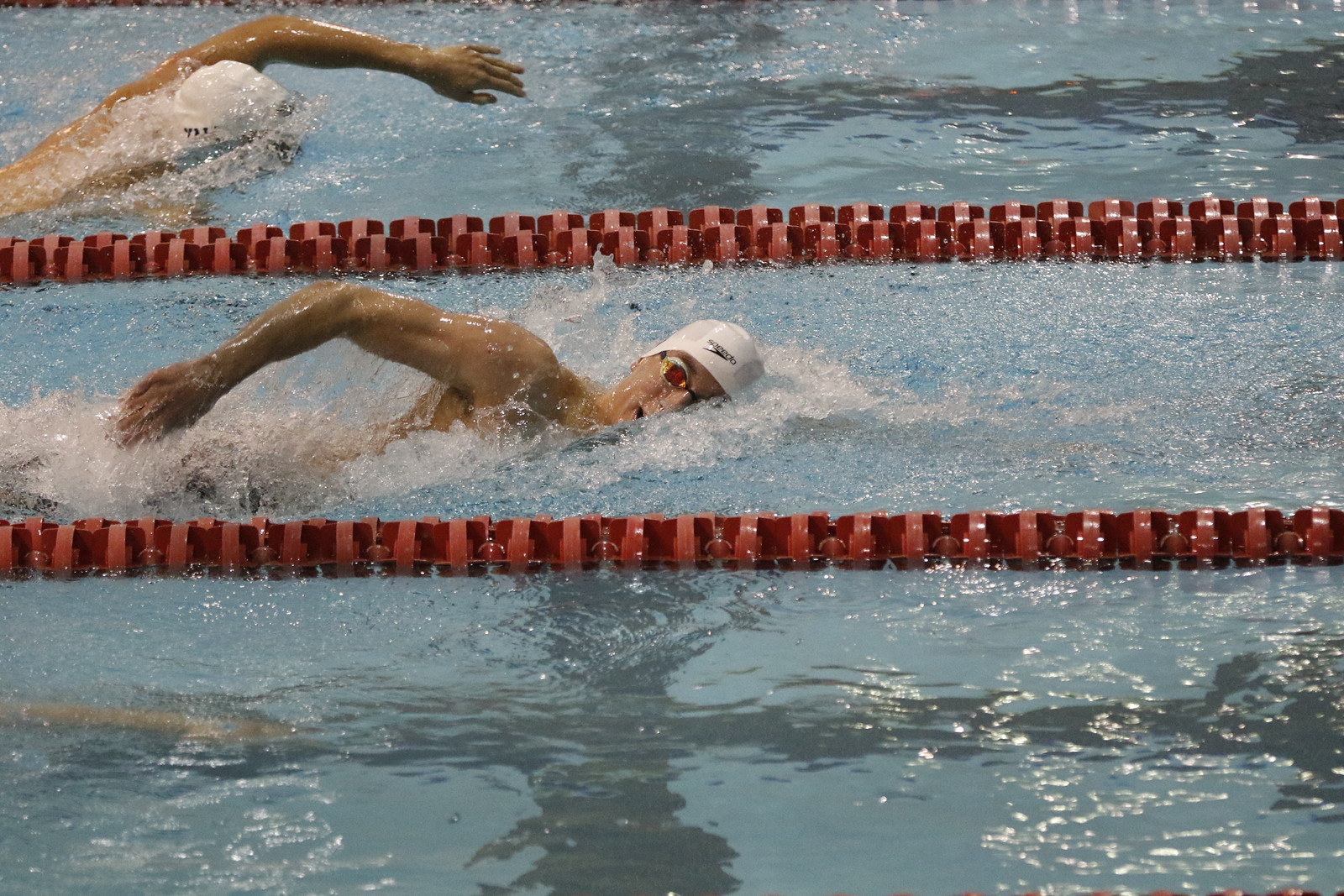 Three individual All-America Honors. Two National Championships. One NCAA and United States record. This was the weekend of Dean Farris.

In addition to all of the individual accolades, Harvard placed eighth as a team at the Men’s Swimming and Diving NCAA National Championships, which were held in Austin, Texas on March 27-30. The Crimson finished with 132 total points, making it the best finish by the team since the 1960-61 season, as well as the first top 10 finish by an Ivy League school in 50 years.

The NCAA National Championships marked the end of the swimming season that began back in early November. Harvard sent six swimmers, as well as four alternates that could swim in relays, to compete in Austin.

The first day was relatively quiet in terms of the number of events, but the Crimson made sure to make plenty of noise. The only race of the day was the 800-yard freestyle relay swam by the junior, Farris, senior Brennan Novak, sophomore Mahlon Reihman, and sophomore Corban Rawls. Farris swam the first leg of the relay and his performance was one for the ages.

In his leg, Farris swam the 200-yard freestyle in 1:29.15, which set the NCAA and United States record for that event. The previous record of 1:29.50 was set by Townley Haas of the University of Texas, Austin at last season’s NCAA Championships. “It was pretty surreal. I was in a lot of pain at first, but once the relay finished and everything set in, I was pretty overwhelmed,” said Farris when asked about his initial reaction to setting the record.

The team ended up placing seventh in the 800-yard freestyle relay and earned All-America honors. Despite all of the chaos, there were still many more events to follow for the Crimson.

The second day began with the 200-yard freestyle relay swam by junior Raphael Marcoux, Farris, freshman Umitcan Gures, and senior Grant Goddard. After setting a Harvard record with a time of 1:16.43 in the prelims, the team posted a 1:18.06 time in the finals. The performance earned the team eighth place in the event, as well as another All-America honor.

Soon after, Novak returned for a solo race in the 500-yard freestyle. With a time of 4:21.72, Novak earned an eighth place finish in the event. Novak was also able to obtain All-America honors in the process, and earned more points for the Crimson team overall.

Finally, Farris returned to the pool for the quick 50-yard freestyle race. In the preliminary heat, Farris broke his own school record of 19.16 set last year with a 18.92 finish. Shortly after, he followed up with a 19.02 in the finals, which garnered a sixth place finish and an All-America recognition for the Atlanta native.

The third day kicked off with a bang, with Farris picking up right where he left off. In the 100-yard backstroke, Farris put up an astonishing time of 43.66. The time not only earned Farris a first place finish and a national championship, but was also the second fastest time in history. The only other person to post a faster time is Olympic gold-medalist Ryan Murphy, who put up a 43.49 time in 2016 at the University of California, Berkeley.

Not too long later, Farris returned to swim the 200-yard medley relay alongside Gures, Marcoux, and junior Daniel Chang. After an 11th place finish in the prelims, the team put up a time of 1:24.68 in the championships. Although the time in the finals bumped the team back to 13th place in the event, Harvard still earned an Honorable Mention All-America recognition to close out the night.

The fourth and final day of the national championships saw Farris return for one last solo and team race. Although he had to wait all day for his events, the junior made his way back to the blocks for the 100-yard freestyle final. In his last individual race of the 2018-2019 season, Farris posted a time of 40.80, which not only earned him a first place finish and his third individual All-America distinguishment, but also marked his second national championship in two days. Further, the time was the third-fastest showing in the 100-yard freestyle in history.

When reflecting on the accomplishments, Farris said, “It means a lot (to me). My teammates and coaches pushed me a lot this year to get those performances at NCAAs. The confidence in my training definitely helped me stay confident during the race.”

To cap off the meet, Harvard had Farris, Marcoux, Gures, and Rawls all return for the 400-yard freestyle relay. The team finished in 10th place and earned its second Honorable Mention All-America accolade of the meet with a new school record time of 2:49.88.

Harvard finished the meet in eighth place with 132 points, making it the school’s best finish in the past 56 years. “We’ve been preparing for the NCAA championships all year. We’ve had a focus on the meet since the start of the season, and we used our performance at Ivies to set up this top eight finish,” said Farris.

While many continue to be in awe of the performance Farris put up, Coach Tyrrell is not surprised. “Dean has had this coming for the past ten, twelve, fourteen years,” he said. “He has worked very hard for it and improved his backstroke and freestyle.”

With a relatively young team, it will be interesting to see what the Crimson do next season. “I’m looking forward to enjoying this top eight finish with my teammates and then resetting for the summer and next year. I want to continue to get better and enjoy swimming fast with my team,” said Farris.

It will not be easy to top the feats accomplished this year, but the future looks very bright for Dean Farris and the Harvard men’s swimming and diving program.