Harvard wins 2 of its 3 game series against the Lions. 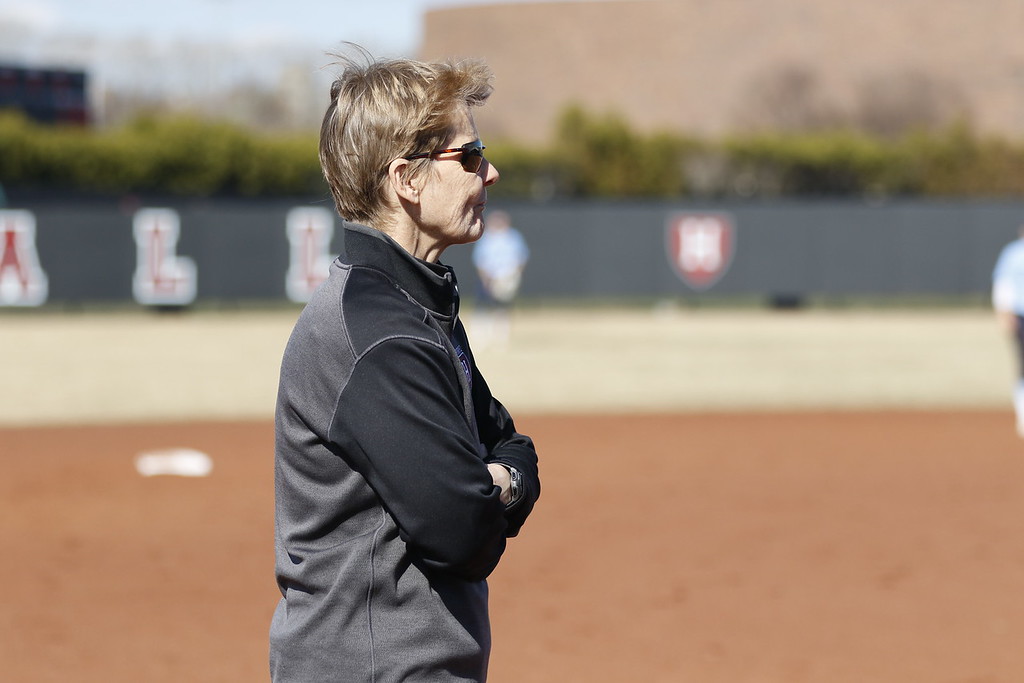 Head Coach Jenny Allard gained her 300th Ivy League victory this weekend, just a little under a year after getting her 600th career win.
By Mohamed Ahmed, Crimson Staff Writer

As Cambridge continues to experience the marvels of spring, Harvard softball came home to host the top seeded team in the Ivy League conference, the Columbia Lions. After a dominating game one performance and a narrow game two loss, the Crimson went 9-1 in game three to secure this weekend’s series.

“Columbia was a huge matchup,” sophomore infielder Morgan Melito said. “They are a very quality team and it was a great weekend to compete with them and come out with a series win”

The Crimson had a dominant performance in the first game against their Ivy League rivals. After giving up a run early in the first inning, Harvard answered back with three of its own.

After a scoreless second inning and a single Harvard run in the third, the Crimson turned on the boosters and proceeded to showcase complete dominance with a single inning total of 10 runs.

The run streak began with a base walk, with all the bases loaded, which allowed freshman catcher Megan Welsh to score. After that, the runs kept on piling up with multiple Harvard players getting in on the scoring action, including senior infielder Rhianna Rich, who was the last Crimson to score, bringing the total runs to fourteen.

“We had a very definitive game plan against them’” senior catcher Elizabeth Shively said. “To be offensive and really be on the attack. The plan was to swing early on the count and good pitches, which we executed.”

Following their blowout victory in game one, the Crimson fell to the Lions in a very close game two. The Lions came out roaring right from the gate with a total of 10 runs in the first two innings.

Harvard tried to overcome that deficit and came very close when Welsh scored, cutting Columbia’s lead to one. However, that was not enough with the Lions wrapping up the final inning with their single point lead maintained, giving them the game two victory.

Both teams headed into game three with the series tied at 1-1, with the Crimson pulling out ahead early in the match to take a 4-0 lead after the first inning, thanks to a three-run hammer from Melito.

“We were gonna approach the next game relentlessly,” said Shively. “We were gonna stick to our plan and continue that attack mindset.”

The Lions answered back with a run, but that was all they could do before the Crimson ran away with the game, ultimately gaining 9 runs and the series victory.

“Everyone did their job well”, said Melito. Everyone had a role in those two games and our pitching staff shut them down. The biggest thing was getting all the moving parts together and that is what we have been working on this season.

This weekend’s victory also gave head coach Jenny Allard her 300th Ivy League win, the most of any Ivy League softball coach. This comes just a year after netting her 600th career win in a game against the Columbia Lions.

“[Coach Allard] is definitely the heartbeat of our team,” said Melito. “As the leader of this program she definitely sets the Harvard softball league culture. She’s been here for 20+ years and her leadership has ingrained the team with so many values that set the tone [for the softball program].”

Harvard faces Boston College this tuesday before traveling to Hanover, N.H. this weekend to face Dartmouth in a three game series, which has major Ivy League implications.

“We took this series as a turning point for our team,” said Melito. “Coming together as a team and that is only going to prepare us for our opponent this weekend, Dartmouth.”