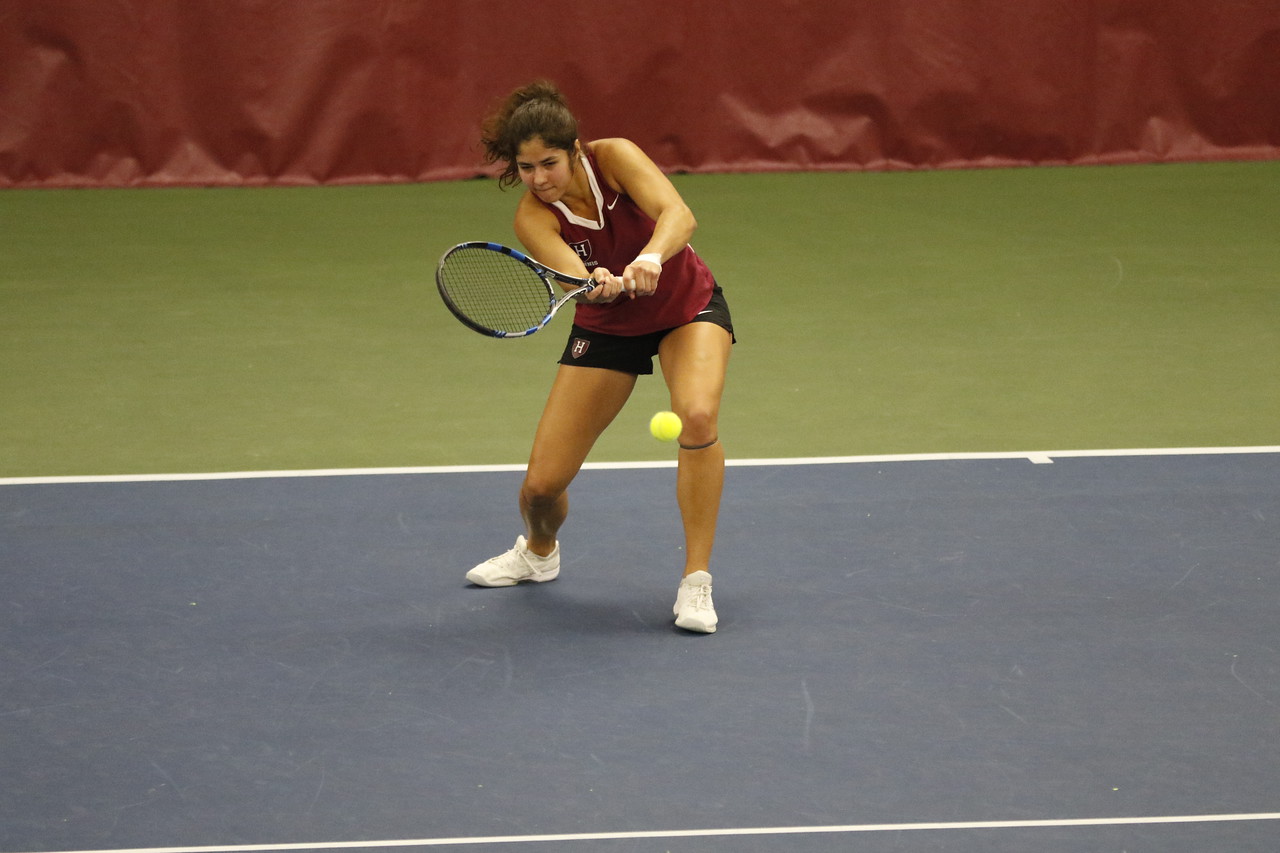 Both Harvard Men’s and Women’s Tennis dominated the weekend, only dropping one collective loss to the Princeton Tigers. By Timothy R. O'Meara
By Eamon J. McLoughlin, Crimson Staff Writer

Both the Men’s and Women’s Tennis teams entered their first full weekend of Ivy League play with some momentum. The men’s team had won their last three, while the women’s team boasted a whopping five straight victories. After the weekend’s matches versus Penn and Princeton, the men’s team matched their counterparts’ five wins in a row, going 2-0, while the women’s team picked up their sixth consecutive win before dropping Sunday’s match versus Princeton.

Harvard (15-5, 2-0 Ivy) opened its Ivy League play against Penn on Saturday with a dominant 6-1 performance in Philadelphia. The matchup was a rematch of February’s ECAC Finals, in which the Crimson fell 4-3 to the Quakers away. The victory was Harvard’s fourth in a row, getting them off to a perfect start in Ivy play. The Crimson was quick to pick up the doubles point, going 2-0, and didn’t slow down on its way to victory.

“We came out strong for the doubles point. The guys at number two and three doubles did a really good job of securing the point, and that was good for carrying the momentum into singles.” senior Michael Peters said. “A bunch of the guys made quick work of their matches in singles which was really good.”

In singles play, senior Andy Zhou was first to get Harvard on the board, winning in straight sets in the number two slot. His teammates followed suit, with the Crimson picking up all but one of the singles points. Freshman Steven Sun’s 2-6, 6-0, 6-2 win at number five improved him to a team-best 14-2 in singles on the season.

Harvard kept the momentum going on Sunday with another convincing victory versus Princeton, finishing with a 5-2 victory. This was the third meeting between the two teams this season, with the Crimson winning all three, including one at ECAC championships. Harvard again took the doubles point with back to back wins, with freshmen duo Harris Walker and Steven Sun clinching the point for the Crimson.

Harvard’s young team continued to impress in singles, as both Sun and Walker picked up victories, 6-0, 6-3 and 1-6, 7-5, 10-4 respectively. Fellow freshman Brian Shi added a 6-2, 6-1 in the three spot before sophomore Lane Leschly won in straight sets 6-2, 6-3 at number six to clinch the win for the Crimson.

“It was a great weekend overall, we’re really excited to start off 2-0 in Ivy play,” Peters added. We’re really hoping to carry that momentum into this next weekend when we play Yale on Friday and Brown on Sunday.”

Harvard (14-6, 2-1 Ivy) extended their win streak to six matches with its home victory over Penn on Saturday. The Crimson dropped the doubles point, 2-1, before coming back with four consecutive points in singles play. The win improved Harvard to an impressive 11-2 record in front of their home crowd.

Junior Jenna Friedel and freshman Rachel Lim won 7-5 in doubles, before going on to win their singles points as well, winning 6-2, 6-4 and 6-3, 6-4 in the second and third spots respectively. The win was Friedel’s eighth singles victory in a row, and improved her record in the number two slot to 11-1.

“We started off with Penn and it was really quick actually, our team just came out ready to fire.” junior Lexi Milunovich said. “Everyone was fighting in their matches, but we ended up beating them.”

Harvard wasn’t able to keep their streak alive the following day, as they fell to Princeton for their first Ivy League loss of the season. The pairing of senior Erica Oosterhout and junior Natasha Gonzalez continued their strong doubles play as they picked up their team best ninth doubles win, 6-2 while the Crimson ended up dropping the doubles point. Oosterhout kept her momentum as she sailed to a 6-2, 6-0 win in the top spot for Harvard.

Friedel improved to nine straight singles wins, winning 6-1, 6-2 in the second slot for the Crimson. Junior Irene Lu grabbed another point for Harvard, 6-0, 6-2, in the sixth spot, but this wasn’t enough to secure the victory, as the Crimson dropped the remaining three singles matches. The 3-4 loss puts a dent in Harvard’s Ivy League aspirations, but with four conference games remaining, anything can happen.

“It’s a little bit of a heartbreaker that we ended up losing 3-4, but all these matches come down to a couple points.” Milunovich added. “The important thing to remember is that anyone can win on any day, and teams are so closely matched that it’s really whoever wants it more that day.”