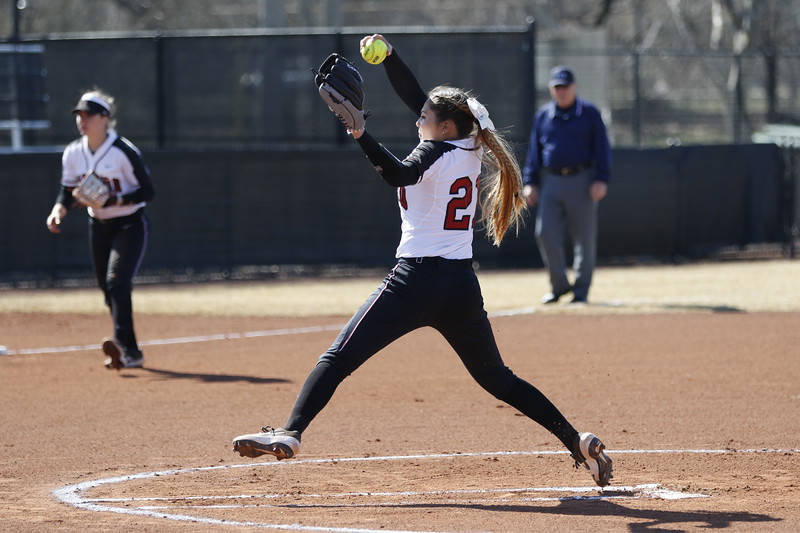 Junior pitcher Alissa Hiener winds up to launch a swift pitch at her opponent.
By Mohamed Ahmed, Crimson Staff Writer

After back to back Ivy League title losses in 2016 and 2017, Harvard softball looked to finally clinch that coveted Ivy title in their 2018 run. Starting off the season strong, the Crimson looked to make a statement that showed that they would not be denied an Ivy title again.

However, after going 1-4 in their last five games, Harvard softball entered the postseason with a chip on their shoulder, hungry to prove their superiority over their conference rivals. As the regular season concluded, a last minute change orchestrated by conference officials completely shook up the Ivy League picture.

“A week before the championship series the athletic directors of the Ivy League got together and decided to change it last minute,” Melito said. “The winner [of the Ivy League] would be the best record.”

After a scoreless first two innings, the Crimson and the Big Green traded runs in the third and fourth innings. Coming into the fifth inning, the Crimson hoped to break away with the lead but found themselves on the defensive, ultimately giving up three runs and staring at a 4-1 deficit as the game entered the seventh and final inning.

“We were down to the seventh inning,” said Melito. “Down a few runs and we had an incredible rally back.’

In the top of the seventh inning with game one on the line, the Crimson began their comeback campaign with then junior outfielder Kaitlyn Schiffhauer walking to first base. Afterwards the Crimson got into deep trouble, with their next two batters recording out, setting up a very tense do or die situation.

“A combination of hits and making [Dartmouth] make errors, we did everything we could to keep that inning going,” said Melito. “People came in clutch in a lot of different situations for a lot of different reason. The dugout had an incredible energy really backing our hitters up.”

The Crimson’s fortune quickly turned when then junior infielder Meagan Lantz connected with a high-speed pitch and launched the ball down the center for a homerun, allowing her and Schiffhauer to score and cut the Big Green’s lead to one.

“We came down to two outs and two strikes,” said Melito. “We continued to find a way to get on base and chip away and eventually we came out on top.”

After multiple 2 strikes situations, the Crimson managed to gain the lead after a single allowed then senior outfielder Dallas Hogan and then junior infielder Erin Lockhart to score. The Crimson wrapped up the rest of the inning and left game one victorious.

Coming off a game one victory, the Crimson raced out of the gates roaring in game two with 2 runs in the first inning and 2 more after the forth, all while keeping Dartmouth scoreless. It was not until the seventh inning that the Big Green found home plate but by that time it was much too late.

“It was such a celebration of joy”, said Melito. “A celebration of all our hard work, all those four years for those then seniors, and [overcoming] a number of injuries that year.”

Thanks to Harvard’s two game sweep and conference officials’ decision prior to the tournament, it was ruled that the 2018 Ivy League title would be shared by both the Crimson and the Big Green, resulting in each of them being crowned as co-champions.

“It motivated me to work hard at home and get prepared for next year,” said freshman pitcher and first baseman Brianna Jewett. “It was very exciting for the program because they have been in the championship series in recent years but have not won [until now].”

Looking to replicate last season’s success, this year’s incoming freshman class look towards the upperclassmen on that for guidance and mentorship.

“The seniors have dedicated a lot of time to the program and have been encouraging and welcoming to everyone”, Jewett said. “We all have a really tight bond and want to do it for each other.”

—Staff writer Mohamed Ahmed can be reached at mohamed.ahmed@thecrimson.com.