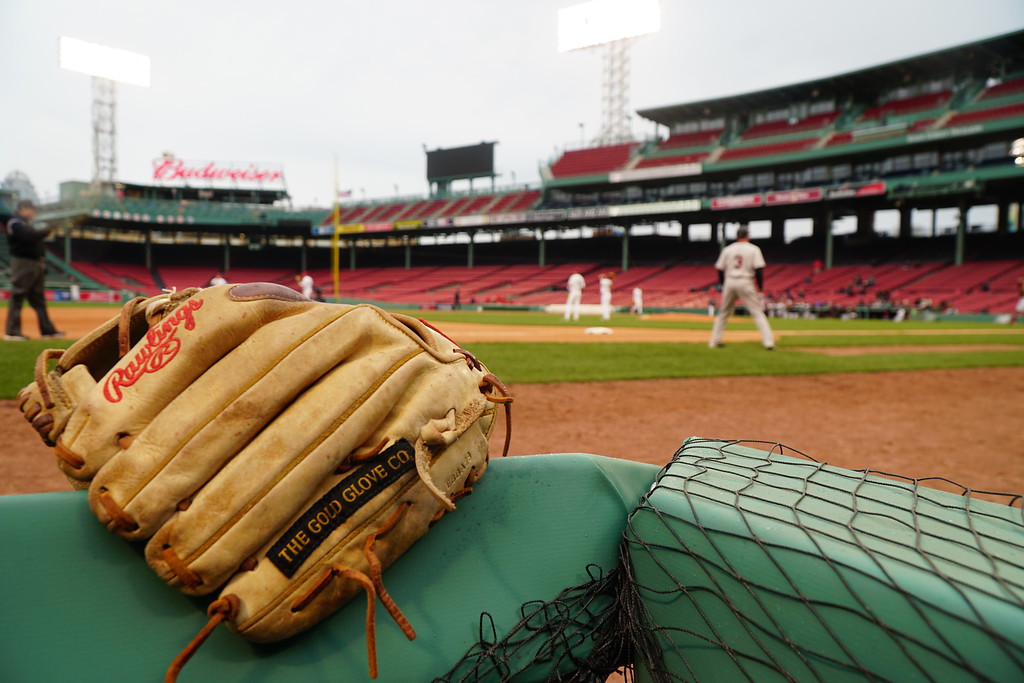 The Crimson are looking to win back-to-back Beanpot championships for the first time in program history, facing off against UMass in Fenway Park, the home stadium of the Boston Red Sox By Ryosuke Takashima
By William Connaughton, Contributing Writer

Looking to continue its excellent performance this season, the Crimson will be traveling to the historic Fenway Park on Wednesday afternoon to try and win its second straight Beanpot Championship.

Follow our live tweets here, and read our full recap below:

The Minutemen started off the season to a rocky start, have turned things around since then. After beating Boston College 6-2 in the opening round of the Beanpot on April 2nd, the surging Umass team has won six of its last eight games, coming into the Beanpot final in good form.

To get into the Beanpot, Harvard beat a strong Northeastern squad 4-3, surrendering only one hit and turning the game over to the strong bullpen as senior closer Kieran Shaw brought home the win. Since then, the Crimson has been on a similar hot streak as the Minutemen, as it has taken two series 2-1 against strong Ivy League opponents, Yale and Cornell.

Harvard is led by Shaw who is second in the nation in saves with 11, a school record, and senior first baseman Patrick McColl, who is fifth in the nation in batting average, hitting a strong .443. Both lead the Ivy League in their respective categories.

“I think the key will be coming out aggressive early and trying to set the pace,” said McColl about the Crimson’s approach to the game, “Playing at Fenway can definitely cause some nerves, so trying to take an early lead will help calm those nerves.”

The key to the game for the Harvard pitchers will be to shut down a balanced UMass offense who, one through six, can put the ball in play. With a strong bullpen, Harvard hopes to jump on the Umass pitching staff early with their hot bats.

The team is led by a tight knit and hard-working ground of upperclassmen: McColl, senior outfielder Ben Skinner, junior outfielder Jake Suddleton, and junior infielder Chad Minato are all hitting above .300 and slugging above .400. It will be the difficult task of the Minutemen to slow down this potent upperclassmen offense.

For the Crimson, this game represents an opportunity to immortalize their names into the record books: never in the program’s history has Harvard won back to back Beanpot Championships. This game also is the fourth time that the Crimson have been in the Beanpot Championship in the past six years. In a year chock-full of incredible individual performances that rank on the national NCAA leaderboards, this game is a chance to break one more program record, this time as a team. The strong season so far shows the commitment and dedication of the baseball program as a whole: in the offseason, the practices, and the games.

The team is excited to play at one of the most famous parks in the sport. The players collectively anticipate the nerves that surround the game, but are prepared to go out and perform to the best of their ability. For many of the upperclassmen, their last time at Fenway was clouded with bad weather, and this game represents possibly their last chance to play in the historic ballpark.

“I’m excited to be back at Fenway, because my sophomore year the game got cut short due to rain,” said McColl on the opportunity to play at Fenway, “It doesn’t look like that will happen this year so hopefully we can defend our Beanpot title.”

All ticket proceeds from the game will go to support a great cause, the Pete Frates 3 Fund, named after a Boston College baseball captain who was diagnosed with ALS. The game is set to start 45 minutes after the consolation game between Boston College and Northeastern ends at approximately 5:00 PM.