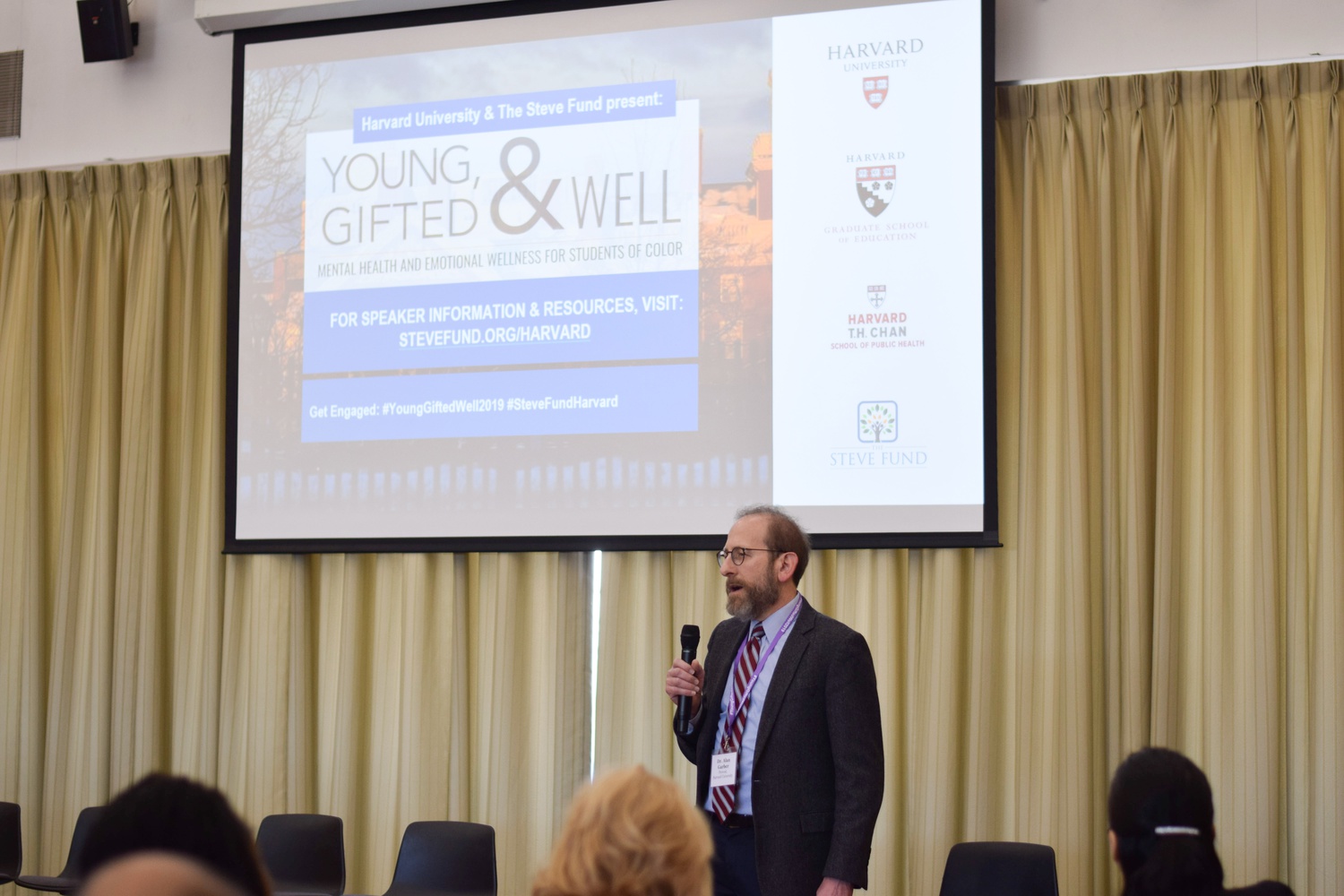 Harvard hosted a day-long conference entitled “Young, Gifted & Well” to promote discussion about mental health and wellness among students of color at the University at the Student Organization Center at Hilles on Tuesday.

The University collaborated with the Graduate School of Education, the School of Public Health, and the Steve Fund, which is an organization devoted to supporting the emotional well-being of young people of color.

The conference began with welcoming speeches from representatives of the Steve Fund and University officials, including Provost Alan M. Garber '76, Dean of the Graduate School of Education Bridget T. Long, and Senior Advisor and Strategist to the University President John S. Wilson.

Garber first addressed the audience, speaking about the importance of students' well-being. Last week, Harvard’s Office of the Provost announced the creation of a new task force dedicated to examining and promoting student mental health and wellness on campus.

“It's a particularly acute issue for students of color, and for students of marginalized groups of all kinds,” Garber said. “We increasingly recognize that we need to develop solutions that will address the very needs of our students in our University.”

After introductory remarks, conference attendees participated in four plenaries, including “Cultural and Social Determinants of Mental and Emotional Health,” “Intersectionality and Mental Health,” “Reflections,” and “Promising Practices: How to Foster Well-Being in Students of Color.” Attendees also had an opportunity to engage in five smaller breakout sessions, which facilitated conversations about mental health.

During the first plenary, Josephine M. Kim, a lecturer at the Graduate School of Education, spoke about the factors that play into the mental and emotional health of students of color.

“We're looking at social determinants of mental and emotional health of students of color, which are conditions in which they live, study, learn, participate, socialize and grow,” Kim said. “And the circumstances are shaped by distribution of power, resources, representation, sense of inclusion, and belonging at the campus level.”

The fourth plenary featured David Rivera, a member of the Steve Fund’s Knowledge Committee, who spoke about the need for inclusivity on campus and the importance of diverse counseling services.

“You could have the most dynamic counseling center full of culturally competent therapists, but if students aren’t feeling the campus is inclusive, they’re not going to go seek out that support if they’re isolated,” Rivera said.

“Silence about mental health issues is too much a part of the narrative of mental health for communities of color, and we need to start changing that narrative, to have positive messages and stories of persistence,” he added.

Deepali B. Ravel, a lecturer at the Medical School, said that although there are many mental health resources on campus, students do not always know how to access them.

“There’s starting to be this sea of resources here, but students don’t necessarily know about them and they’re not necessarily being told how to use them,” Ravel said.

In his closing remarks, Wilson said the conference is going to initiate conversations "to change our culture at Harvard University and change it throughout American higher education.”