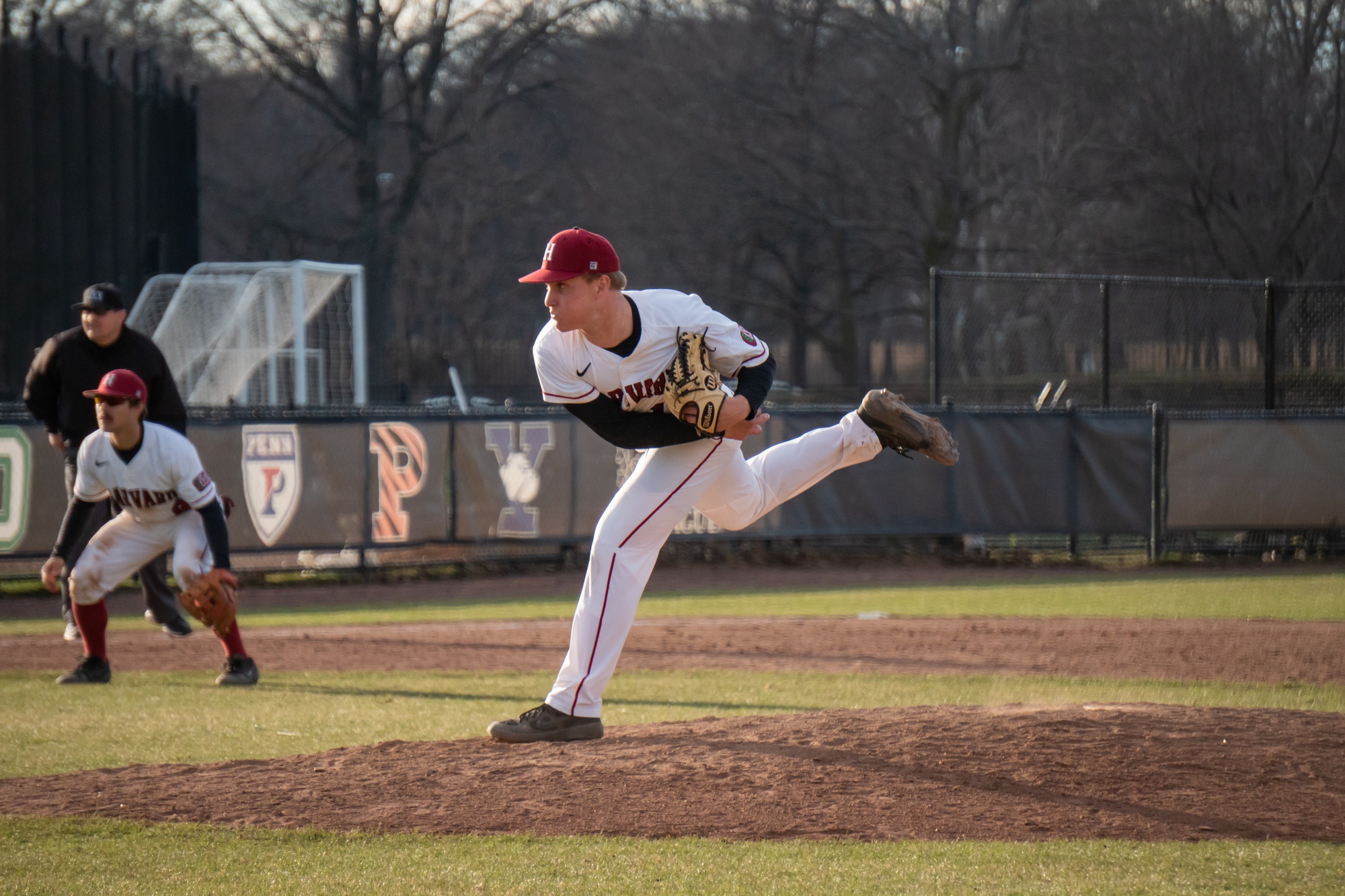 Kieran Shaw has cemented his role as the Crimson's closer this season. By Brendan J. Chapuis
By Amir Mamdani, Crimson Staff Writer

It felt only fitting that the third out of Kieran Shaw’s record-breaking save would be a comebacker right at the junior.

Shaw jogged most of the way towards first base, tossing the ball softly into first baseman Pat McColl’s glove, sealing a 2-1 Harvard win over Dartmouth in the first game of a doubleheader on Sunday. As important as the victory was for a Crimson team then tied for first place in the Ancient Eight, the real story was Shaw’s 12th save — the most ever for an Ivy League pitcher in a single season, and the exclamation mark on an explosive season few could have seen coming.

Through Shaw’s first two seasons in Cambridge, the right-hander compiled just eight total saves, starting three games and posting an ERA around 6.85. Suddenly, in the third year of his career, the Los Gatos, Calif., native has emerged with a record-breaking season complemented by an ERA of just 3.24, and has earned the third most saves in the country. Those that know Shaw will be quick to point out that this breakout is no surprise.

“It happens all the time with a lot of guys, there’s always an adjustment period for every college player,” said senior pitcher Kevin Stone, the elder statesman of the staff. “If you ask anyone on the team, they’d say they expect this out of him because of how talented he is and how hard he works.”

Shaw’s emergence has been no small part of Harvard’s success this season. As the Crimson enter the final six games of Ivy League play, the team hopes to return to its first NCAA Regional since the 2005 season. Since the 2006 campaign, Harvard has yet to finish an Ivy League regular season in first place, but the Crimson recently won five straight series and a strong series next weekend at home against Columbia could help break that drought.

While Shaw’s record might only be 0-2, any baseball fan can tell you that 12 saves in 14 appearances is an elite mark for any closer. As Coach Bill Decker’s team picks up momentum, much of its confidence in ballgames stems from knowing that No. 17 is coming out of the bullpen to protect the lead — confidence that is infectious across the entire roster.

“In the Ivy League every game matters,” Stone explained. “Having Kieran, a closer in the back of the bullpen that you’re confident in knowing he’s gonna get the job done, it’s extremely important for us.”

Shaw’s 12 saves broke the 11-save record previously set by Yale’s Brett Rosenthal in 2006, and matched by Dartmouth’s Ryan Smith in 2009. Now, one decade later, Shaw’s name will enter the record books atop the 26 years of Ancient Eight baseball, setting the new mark of 12 saves or more.

With an ERA lower than half of what it was in either of his first two seasons, Shaw’s turnaround is undeniable. But the product of Bellarmine College Prep. is quick to point to the summer as the cause of his success.

“I really got the chance to get into a routine this summer,” Shaw explained. “When you get used to doing something, like closing games, you really start to believe you can do it well.”

In high school, Shaw was a two-sport athlete at Bellarmine, starring both on the diamond and contributing on the football field as well. In his senior season, the right-hander was honored as the Bellarmine pitcher of the year in 2016, and was named captain. In college, however, it took two years for Shaw to truly hit his stride.

Record-breaking aside, the 2019 season has not been without its tribulations for the junior, who has overcome two heartbreaking losses against Yale at home and UMass in the Beanpot finals, ceding multiple runs in the 9th innings to blow both saves. Despite writing his name into the record books, with eight games remaining to build on his 12 saves, Shaw credits those blown saves and losses for keeping him desperate to improve.

“We always talk about using what happened in those games as a tool to channel our energy and our mechanics,” Shaw said of the losses. “Instead of getting down on yourself, move on and refocus.”

While many might focus upon the intimidating 6’0 frame that comes through the bullpen doors in the ninth inning, Shaw plays a myriad of roles during the lengthy three-hour games, from handing umpires water cups to cracking jokes in the bullpen.

And while the closer’s scowl might intimidate the hitters that step into the batter's box, his fellow pitchers and teammates know Shaw as a light-hearted and genuine player.

“His work ethic is through the roof,” Stone said. “But in the locker room he’s someone that’s very approachable for younger players and to just shoot the breeze with.”

With over two weeks left in the season, Kieran Shaw will have the opportunity to build upon what has already been a record-breaking season. His name etched into the Ivy League single-season record books, Shaw will turn his attention to helping Harvard return to the NCAA Tournament for the first time in 14 seasons, a task he views as far more important.

While the Crimson’s outlook on winning the Ivy League remain very possible, much uncertainty remains. With sophomore standout Buddy Hayward exiting his start at Dartmouth after just a pair of innings, Harvard may turn to Stone if Hayward is forced to miss time. But while some elements of the Crimson’s roster may be murky, others are as consistent as “Sweet Caroline” playing in the 8th inning of Red Sox games.

Not least amongst those, Kieran Shaw, trotting in from the bullpen in the 9th inning — ready to lock down yet another save to add to his record.