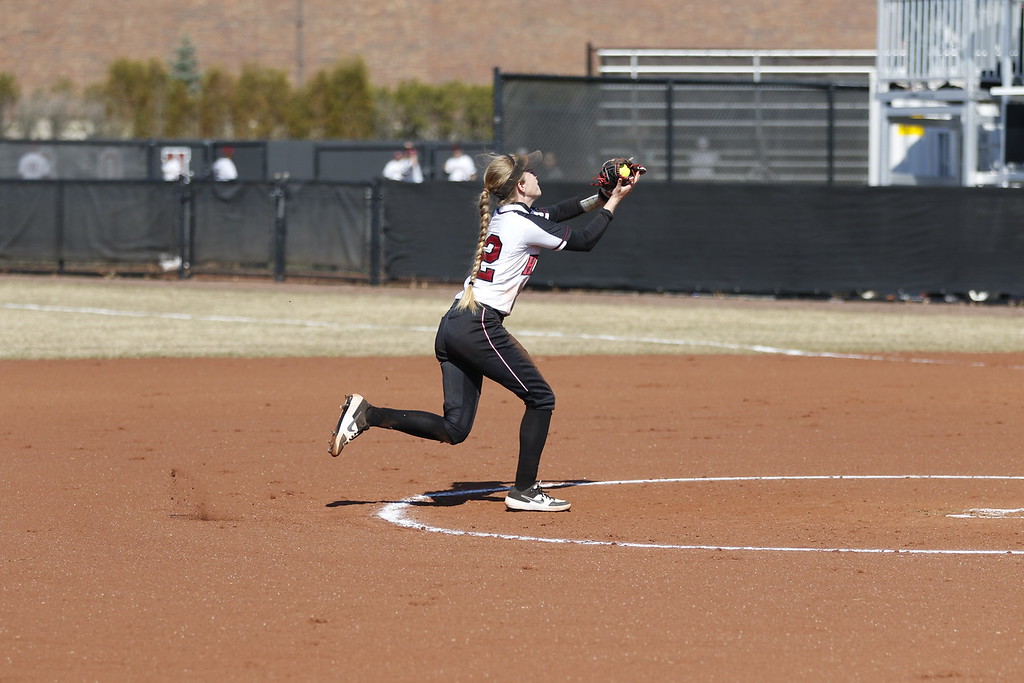 After winning the weekend series over Yale, the Crimson will have another homestand against the Big Red next weekend. By Timothy R. O'Meara
By James Joyce, Crimson Staff Writer

Elizabeth Shively is not one to give up easily. After twenty-one innings of behind-the-plate sitting and pulls-her-weight hitting, the catcher in crimson was still going strong in this weekend’s series against Yale – but a an ill-fated foul-tip was about to change all that. With Harvard up by one at the top of the seventh, Bulldog infielder Annie Tarte back-launched the softball off her bat and straight into Shively’s helmet, prompting a mid-game timeout and the performance of the oh-so-dreaded concussion test. But after one failed attempt at the evaluation, Shively was not deterred; instead, she turned bleacher-wise to the trainer, shouting, “It’s windy – try it again!”

Although Shively was escorted to the dugout after failing that second concussion test, and Harvard off the field after giving up its late-game lead to Yale, Shively’s mantra of strength and perseverance defined this weekend’s series win for the Crimson.

“I think we did a really good job with winning the series this weekend,” said senior captain Katie Duncan. “Obviously the last game didn’t go how we wanted it to, but there’s a lot of good things that we did and things that we can work on to be better next weekend.”

The only thing more nerve-wracking than watching Harvard battle the Bulldogs this Sunday was witnessing an absent-minded toddler almost promenade into the bat of a Harvard slugger during batting practice, and even that may be an understatement (for those of you following along at home, don’t worry – the teetering tot was scooped up by a concerned fan before she could be launched out to right field).

After a Meagan Lantz homer at the bottom of the fourth and a lead-taking single by the same batter during the subsequent inning, it seemed as if the Crimson were about to secure the series sweep – but then the Bulldogs growled back. After a four-run hit-streak at the top of the seventh, Yale all but flashed V-for-victory; a bottom-of-the-inning shutout handed the win to the Bulldogs. However, Duncan credits her teammates with making several SportsCenter-worthy plays.

“I think Meagan [Lantz’s] homerun in the last game was great,” said Duncan. “I also thought the offense in general did a really good job, and hitters one through nine were just consistently were going at it. Elizabeth [Shively] behind the plate and in the batter’s box had an unbelievable weekend too.”

On the weekend, Lantz went 4-for-9, securing three RBIs and a perfect batting average during Harvard’s final game against Yale. Her fourth-inning homerun brought the water-logged crowd to its feet, a high point in the Crimson’s series win at home.

“I just really wanted to help my team in any way I could and get on base, whether that be by a walk, error, or hit-by-pitch,” Lantz said. “I really just wanted to bring energy for the team and do what I could to help in any way.”

However, Lantz doesn’t crown herself series MVP; rather, she credits infielder Rhianna Rich with taking the title of this weekend’s star player.

“I would just say that Rhianna Rich made some really great plays at short this weekend,” Lantz said. “There was a play yesterday where the ball tipped off Teagan Shaw’s glove and Rhianna picked it up, stepped on third, and tried to throw it home for the play. She just makes plays like that all the time, and it’s great playing next to her because she does stuff like that regularly.”

This weekend was certainly full of clutch moments for the Crimson, the majority of which came in their first two matches against the Bulldogs. A first-inning triple by freshman Trina Hoang careened the Crimson to scoreboard during their first game against Yale, and a sixth-inning RBI by sophomore Morgan Melito secured a 7-6 victory for Harvard. The Crimson kept that momentum going into the second game of the doubleheader, with Harvard runs scored in five of six innings, propelling the Crimson to a 7-1 win and the series victory.

“We did some really great things this weekend,” Lantz said. “Obviously people look at the standings and its tight, but I thought we were in a really good position to do some great things and we did. We came out here and took two on Saturday, and even did some great things in [Sunday’s] game by really just focusing on every pitch and every inning.”

Looking forward, the squad is ready to make the transition from Bulldog to Big Red as they take on Cornell in next weekend’s home series.

“I think our mentality is pretty much the same every weekend,” Duncan said. “It’s just getting prepared to play our best game. Next weekend happens to be at home against Cornell, so [we] just need to go back and work on the little things[…] so that we can hopefully walk away happier next weekend.”

For Harvard, next weekend’s series against the Big Red will be near-identical to this last one against Yale: they’ll be playing on the same field, at the same times, against a team from the same conference. However, next weekend will bring with it one big change – this time, Harvard will be shooting for the series sweep. After all, even without the wind, the Crimson are all about trying again.

— Staff writer James Joyce can be reached at james.joyce@thecrimson.com.