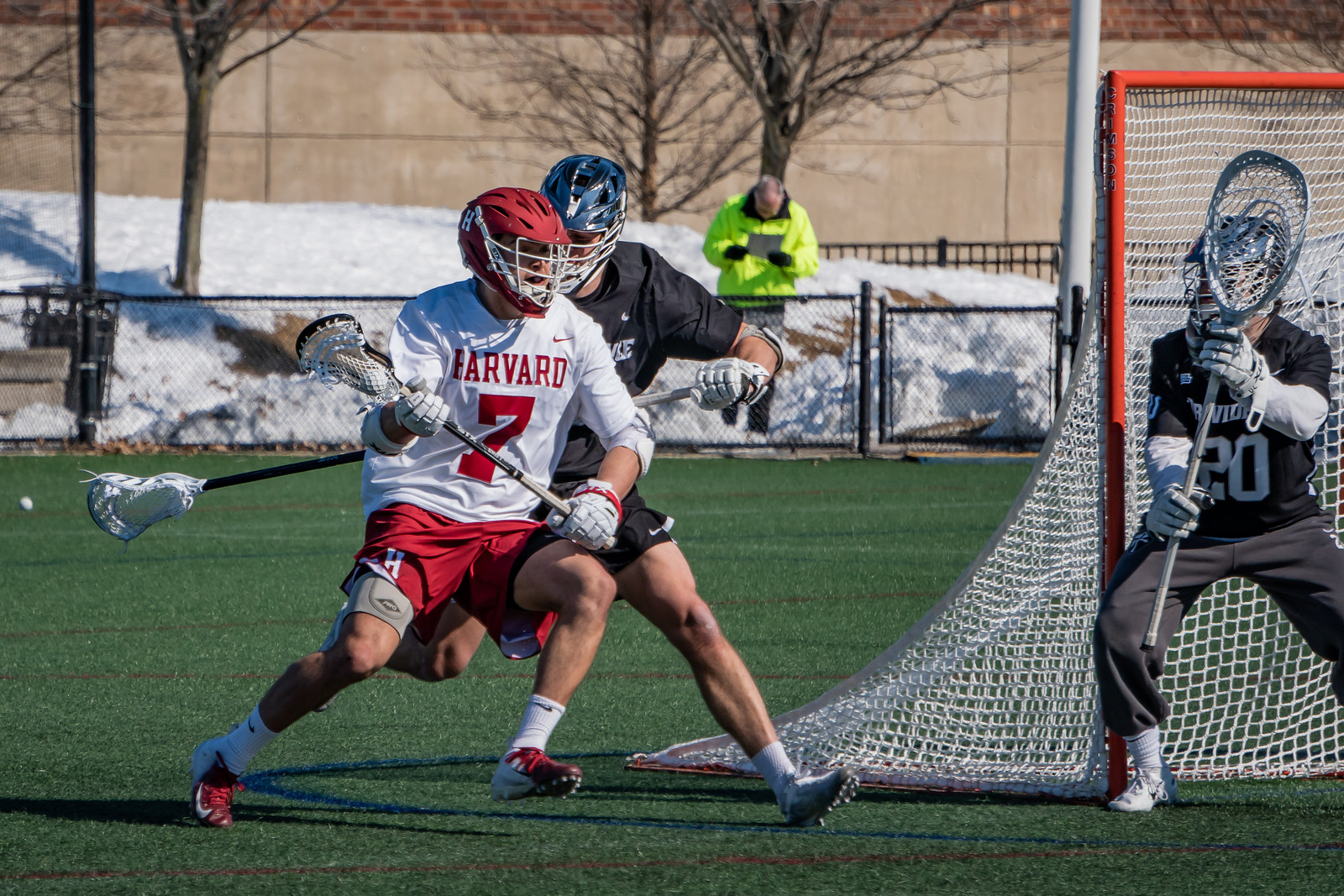 After an incredible midseason surge brought the men’s lacrosse team to above .500 for the first time this season, the Crimson had its three-game win streak snapped against its first ranked opponent since taking on No. 12/14 North Carolina in the season opener.

The Crimson resumed regular season play after a 10-day break since their last game, in which the team picked up their third win in eight days against Albany (4-6, 3-1 America East Conference). Harvard used this extended break to practice and prepare for one of the biggest games of the season. Dawning its white uniforms, the Crimson walked onto Harvard Stadium, not Jordan Field, for a matchup against Ivy foe Cornell (7-3, 2-2 Ivy League).

It did not take long for things to heat up, as the Big Red was able to take the early lead by netting a goal less than a minute into the game. However, the Crimson was determined to hang in the game and to not get shaken up so easily by a rough start. With 8:32 left in the first quarter, standout freshman attacker Austin Madronic evened the game at one apiece with a crafty backhanded scoop shot from just outside the crease.

Over the remainder of the first quarter, the teams battled back and forth, with neither able to gain the upper hand over the other. Cornell would score, but before it could extend the lead, Harvard would battle back and retaliate with a goal of its own. Junior attacker and tri-captain Kyle Anderson was able to put in two of his three goals on the day in the first quarter, and as the opening period finally drew to a close, the Crimson found itself in a tightly contested game, down only 4-3.

However, this one-goal deficit would prove to be the closest Harvard would come for the rest of the game. Cornell came out strong in the second quarter and outscored Harvard 4-1. The Big Red played masterful defense, as the only goal it let up came with 4:55 left in the quarter to sophomore attacker Myles Hamm. After a competitive start, the Crimson found itself doubled 8-4 heading into halftime.

Despite talking things over during the break, Harvard was unable to build any momentum and the third quarter followed the script of the second. Cornell scored a goal 35 seconds into the new frame, and although junior midfielder Nigel Andrews answered back, the effort was not enough to mount the comeback needed. Anderson completed his hat trick in the third, and junior midfielder Jeremy Magno added a goal of his own, but the Cornell offense proved to be too overwhelming and when the third concluded, the Crimson found itself down 13-7.

In the fourth, the Big Red continued to build its lead. At one point, Cornell went up 19-8, marking the largest deficit of the day for the Crimson. However, before the game concluded, the Crimson was able to net a few more goals, including one from Hamm that secured his hat trick.

Harvard ended up losing the game 19-11, but despite the tough match, the team is making sure to remain optimistic heading into the final three games of the season. “That game was a tough one to stomach, but Cornell played well and we will look to improve all over the field,” said Anderson.

The Crimson take the field next on Saturday, April 13 against Penn in Harvard stadium. With the team back even at 5-5, the season can still go any way. Picking up some more conference wins would be significant, but at the same time, a few more loses would be devastating. At such a crucial point in the season, the Crimson is turning to its veterans to lead the team.

“We have an incredibly positive team and that really starts with our small group of seniors. The six of them are the closest friends on our team and they’re great at keeping our team’s attitude consistently positive,” said Anderson. “With only a few regular season games left, every game becomes like a playoff game. We can’t wait to play Penn in Harvard Stadium next Saturday.”

After Penn (6-3, 4-0), the team will travel to Princeton University to take on the Tigers (4-6, 0-3). Finally, on April 27, the team will close out the regular season with a critical game against No. 5 Yale (7-2, 3-1). The rivalry match will be played at Harvard Stadium and the Crimson is very much looking for an opportunity to redeem itself and prove that it is still a force to be reckoned with.

“The next three games will be no different from the last three for us,” said Madronic when asked about the team’s mentality heading into the end of the season. “We will play motivated and give our all to try to extend our season and win an Ivy League Championship.”