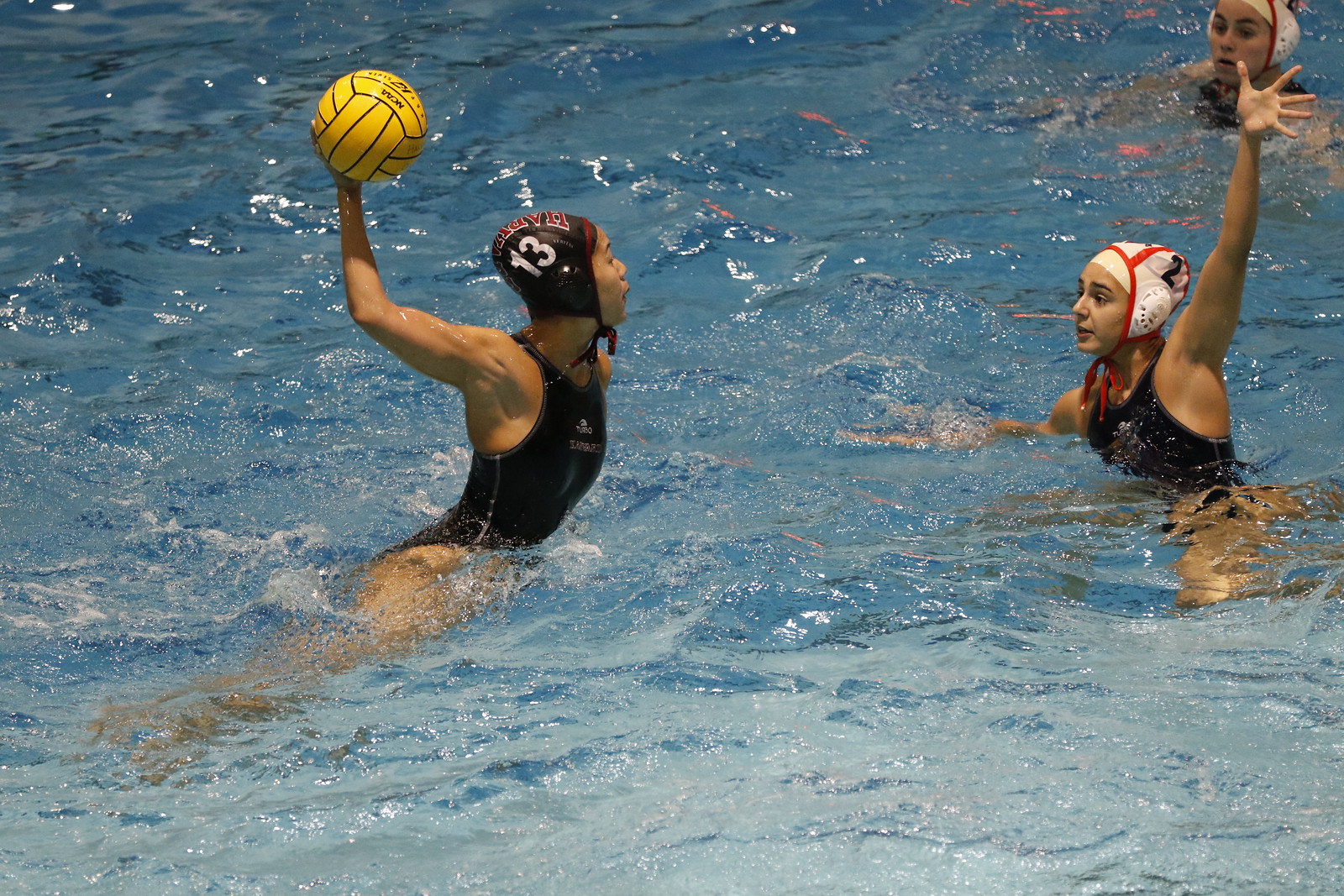 The Crimson’s slate of games this past weekend marked the last time that its senior leaders would be playing in Blodgett Pool. Facing off against George Washington, Bucknell, and St. Francis in a repeat of the previous week’s matchups in the nation’s capital, the Crimson looked to capitalize in its final stretch of home games with decisive victories against its conference opponents.

The seniors were honored before their second game on Saturday, a meeting with Bucknell for the third time this season. Senior keeper Samantha Acker’s impressive 13-save performance against the Bison kept the game low-scoring, but Bucknell edged out Harvard, scoring nine goals to the Crimson’s seven.

With the start of the CWPA Championships approaching, senior leadership will be more important than ever before, as Harvard looks to build off its impressive regular season with a deep playoff run.

Here is a look at the seniors who will be leading the Crimson into the postseason:

The team’s senior captain has been a key part of the team since her start with the program. In her debut for the Crimson, Acker filled up the stat sheet, recording 12 saves, a steal, and an assist in a contest against Villanova. She would go on to finish her freshman campaign with 55 saves.

Having six games with double-digit saves, Acker showed her dominance in goal as a Junior. She ended the year with 163 saves along with 17 assists and nine steals earning the title of captain for her last year with the team.

Leading the team in her final season, Acker has set an example for the freshmen, namely first-year goalkeeper Zoe Banks, to follow. Banks, in fact, was good friends with Samantha when the two were teammates in Henry M. Gunn High School.

“It's really important to be friends with your other goalie. We spend so much of our time together and we train everyday together,” said Acker, referring to the close bond that the two goalkeepers share. “Watching her grow here has been so great.”

The Irvine, Calif. native has been a key to the Crimson’s defense. In her first year with the program, Bowe saw playing time against No. 9 San Jose State, where she capitalized and scored one of her 11 goals on the season. She also saw time in the CWPA Championships, where she tallied two steals against Hartwick, adding to the nine other steals on the season.

In her sophomore and junior campaigns, Bowe saw increased action and contributed once again to the defensive side of the game. Scoring 27 goals and recording 39 steals over those two years, Bowe was an important piece to the squad.

Yet her leadership may be one of her most important contributions to the team.

“She's definitely helped a lot of the younger players, especially the ones who are going into pre-med or biology concentrations.” said Acker, discussing the Neurobiology major’s dedication to helping others academically.

Kristen Hong’s ability to score has been evident since her start with the program in 2016. As a freshman, Hong led the team with 80 goals, tying the single-season program record. She would continue to lead the squad in scoring throughout her sophomore and junior years, and she is currently on pace to be the top goal-scorer for the Crimson in 2019 as well.

Her ability to score from the start earned her Team Rookie of the Year honors, and her continued success placed her on the CWPA all-conference squad her sophomore year before being named to the All-CWPA Division-I second team in her junior campaign.

To go along with these honors, Hong’s performance in the pool set a program record, as she broke the program’s career goals record in her final season at Harvard, surpassing 250 career goals to amend the record books.

“During the CWPA Eastern Championships my freshman year, [our former social media correspondent] watched me score a half-court goal and remembers this entire time,” recalls Hong after a recent encounter with the correspondent when reflecting on her most memorable goal during her time with the program.

The three seniors look to continue their impactful performances in the postseason, which begins after a final conference matchup against Michigan this Saturday. Entering the CWPA Championships for their last time, the Harvard fourth-years hope to make a deep push and cap off their historic regular season with some hardware.

—Staff writer David Manikas can be reached at david.manikas@thecrimson.com.