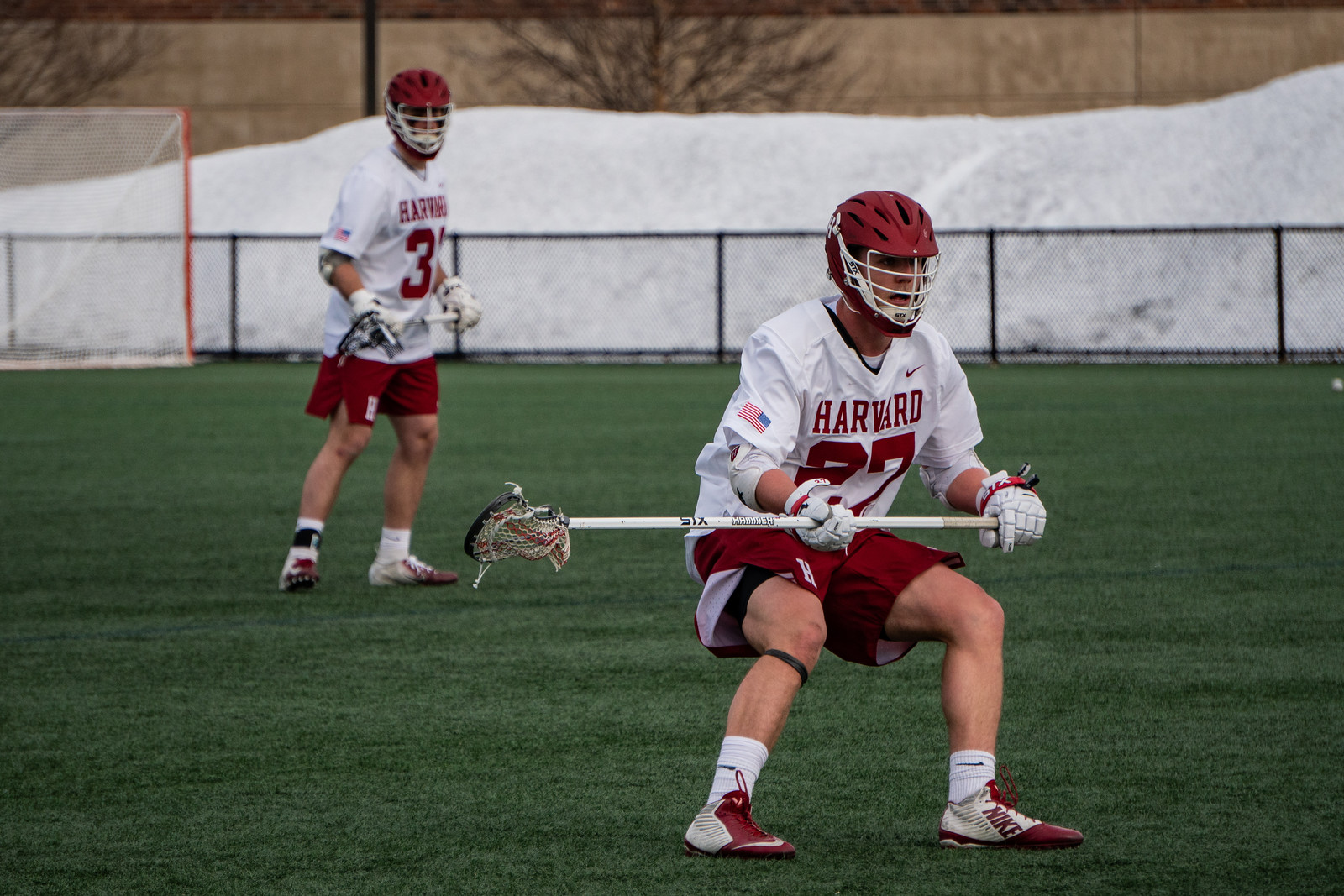 The Harvard men's lacrosse concluded their season this past Saturday. By Brendan J. Chapuis
By William Connaughton, Contributing Writer

Although conceding defeat to Yale, Harvard men’s lacrosse ended its season with a final send-off to an impactul groups of seniors who have helped build the program for four years. The Crimson will look to learn from this season and bring energy and effort into next year.

With the final game of the season, Havard (5-8, 1-5 Ivy League) took on No. 4/5 Yale (11-2, 5-1). The Crimson came into the game on the heels of its toughest stretch of the season both in terms of record and strength of opponent. In April, Harvard faced No. 12/10 Cornell, No. 7/6 Penn, and a strong Princeton team, losing all three games. After this three-game slide, the Crimson had the pleasure of trying to end its streak, facing one of the best teams in the country one year removed from a National Championship.

In contrast, the Bulldogs came into the contest on a four game winning streak, having gone an even more impressive 9-1 in its last ten games. Needless to say, this was always going to be a tough matchup for the Harvard team.

There were a couple of standouts for Harvard. Sophomore attacker Myles Hamm was extremely active against the Bulldogs, scoring a hat trick and dishing out two assists. Hamm came on strong in the second half of the season, finishing with 24 goals and 10 assists, finishing third on the team in total points. Freshman Austin Madronic continued his tear, netting three goals and an assist on the way to second on the team in total points. With a goal in the final frame, Junior Captain Kyle Anderson extended his goal streak to 13 games and his points streak to 25. Finally, sophomore goalie Kyle Mullin did his best against a strong Yale attack, stopping 15 shots, his seventh time reaching that mark this season. These three will all be returning next year and hope to build off this season.

“Our team has a lot of really hard working younger guys,” commented senior captain Jonathan Butler on the state of the program going forward. “They will definitely do great things in the coming years.”

This game represented the last time six seniors would take the field wearing the Harvard lacrosse jersey. The class of 2019 includes attacker Lauren Bidstrup, Butler, defenseman Spencer Daniel, midfielder James Sullivan, and midfielder Eric Wang. Head Coach Chris Wojcik ‘96 praised the group, giving them a proper send-off for all their hard work and dedication to the team over the four years.

“Obviously we are all disappointed with how our season turned out, especially given all the hard work we put in. The program overall has been an awesome experience. It has given me my best friends and has taught me a lot,” commented Butler on the end to the season. “Our senior class is sad to have our careers end, but we feel good about the impact we’ve had on the program overall.”

While the Crimson certainly did not have the season they wanted, the seniors are leaving the team having made a large impact. Their leadership and effort will be a lesson to the next couple of classes of Harvard lacrosse. Nevertheless, the team has its eye toward next year and the promises of an entire offseason to work and get better through.