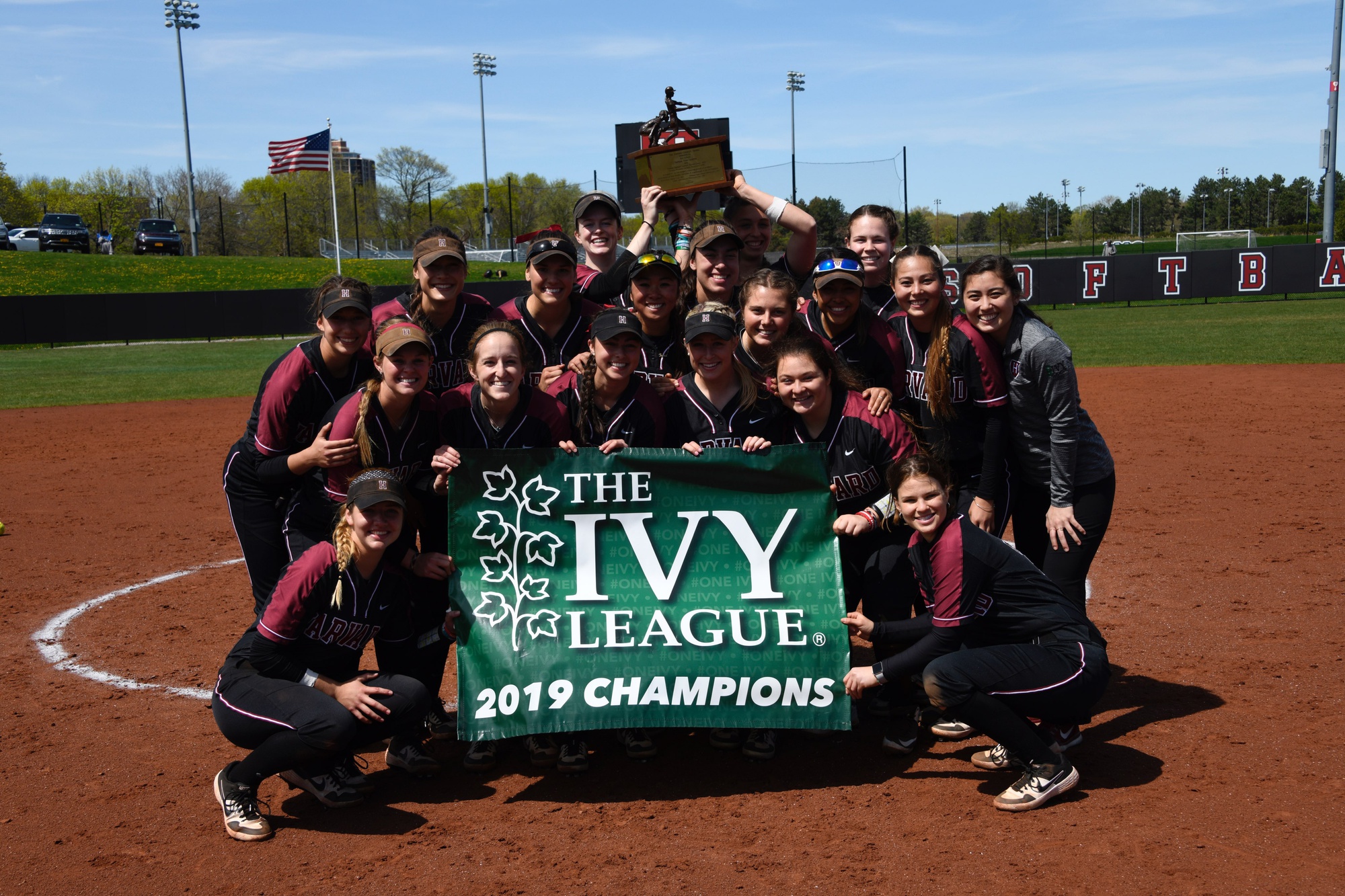 With its resounding 9-1 victory over Cornell earlier this week, the Crimson took home the outright regular season championship for the Ivy League. By Courtesy Harvard Athletics
By James Joyce, Crimson Staff Writer

That used to be where the women in crimson would stop. A trilogy of triumph, and then: a turf-bound tumble.

The change came slowly: a sprightly save by Rhianna here, a dexterous Tyler dive there.

Things are different now. They count off the numbers as smoothly as a chorus of kindergarteners reciting a Dr. Seuss sonnet, the game easier than one-fish two-fish.

And just like that, a record is set, a champion crowned.

Ask any member of the Harvard softball squad what their greatest accomplishment this season has been, and they’ll probably point you toward last weekend’s Ivy League Title. What they won’t tell you is that they’ve gotten pretty damn good at hacky sack.

“At the beginning of the season, we started off maybe being able to get a rally of three of four as a whole group, which was terrible,” said senior captain and two-time Ivy League Pitcher of the Year Katie Duncan. “Now we’ll play hacky and get up to thirteen or fourteen hits, which has been a huge improvement.”

Unbeknownst to even the most devoted of fans, softball isn’t the only sport at which the Crimson excel. Without fail, Harvard’s softball squad is sure to warm up with a quick kickaround of hacky sack before their game-day dash to the diamond, an enterprise that can get fairly extreme.

“We’ve had people dive to get the sack, we’ve had people hit the ground – it’s really funny to see us all get extraordinarily hyped about hacky sack before our games,” Duncan said. “We all get pretty into it, but Megan Welsh and Mackenzie [Tyler] go complete sicko mode when we play.”

“I think hacky sack is a really good way to keep our energy boosted and our bodies moving,” said Tyler, a freshman on the team. “We’ve gotten progressively better throughout the season; I think it’s a good metaphor for how team has improved on the field.”

Improve may be an understatement. In April, Coach Jenny Allard lauded the Crimson (23-17, 16-5 Ivy) for “not having as many quality at bats as we’d like” and “giving pitches away”; last weekend, the team blew those fears out of the water, clinching their second straight Ivy League Title on Saturday and taking the trophy outright on Sunday.

“This weekend, we had two goals: we wanted to go out there and play our best softball, but we also had the end goal of doing all we possibly could to win an Ivy League Title,” Duncan said. “I thought [we] did a phenomenal job fielding every ground ball, making every throw, and taking big swings.”

Although the squad captured the Ivy League Title during Saturday’s doubleheader against Cornell (10-36, 5-16), the team was still in danger of needing to share that distinction with Columbia (24-19, 15-6) – that would have been the second year in a row in which the Crimson split the title. However, Sunday’s Crimson victory and Lions loss ensured that a shared podium need not be constructed.

“It was super exciting to win the championship outright after having to share the title with Dartmouth last year,” said senior infielder Rhianna Rich. “For at least all the returners, it was a goal of ours to make sure that we claimed the title for ourselves because we didn’t want to share it again.”

As it turns out, earning the title in their own right was far from challenging for the Crimson. Within the first two innings of Sunday’s matchup, a pair of early-game doubles from the Megan/Meagan duo (Lantz and Welsh) carried the squad to a 7-1 lead against Cornell. At the bottom of the fifth, Harvard secured an eight-run victory with a hit and walk-off run from Tyler, whose ‘round-the-horn joy ride was met with a cacophony of cheers and tears.

“It was really emotional, being able to cross home plate and have all my teammates right there,” said Tyler of her title-winning trot. “It was such a good feeling to run home and literally dive into all of my teammates’ arms.”

Saturday’s games were just as successful for the sweep-spawning squad. From the batter’s box, Harvard flaunted a number of flawless plate appearances, with senior captain Kaitlyn Schiffhauer earning a walk, five RBIs, and two runs. A quartet of RBI singles during the third inning of the Crimson’s first contest secured an 8-0 walk-off victory, and a striking save from pitcher Alissa Heiner guaranteed Harvard an Ivy League Title after their second match.

However, the most noteworthy Harvard performance came from the mound, where Duncan racked up a shutout – her second of the season – along with a solid six strikeouts. Days later, for the second time in her collegiate career, the New Jersey native earned the title of Ivy League Pitcher of the Year.

“When [the team] found out who won the Ivy League awards, we were all at practice,” Duncan said. “When we learned that I had won, Coach made the comment that as nice as it is that I got Pitcher of the Year, it definitely wasn’t my goal – my goal was to be able to design a ring and have a moment of team celebration; that’s what we all strive for. As nice as [winning Pitcher of the Year] is and as honored as I am, it pales in comparison to what we were able to do as a collective. The team comes first.”

When asked to name this weekend’s standout player, Duncan balked – a testament to her camaraderie-centered mentality.

“Oh jeez – I don’t think I can choose just one,” Duncan said. “I think everyone in the lineup crossed the plate at one point this weekend, and just seeing that was great. During the second game, we were trailing Cornell for awhile, but we were able to score in the fifth and sixth innings and take the lead. Seeing every person pass the bat was a really nice moment where every single one of us was able to go up to the plate as a collective.”

The Crimson’s together-as-one mantra has already earned them one title this season; however, the team’s journey to jubilance is not over just yet. This weekend, Harvard will face Columbia in the Ivy League Championship series – a win against the Lions would propel the squad to the NCAA tournament.

“I think our mentality this weekend is really just focusing on ourselves and knowing that we had a successful series against Columbia a month ago,” Rich said. “I think we have a lot of confidence in ourselves and we’re just excited to go out there and take the field again.”

This weekend, the bleachers of Soldiers Field are sure to be swarmed with supporters of the Crimson and Lions alike, each fan awaiting a thrilling two-team, three-round tug between the squads. However, before Harvard softball takes the field for Saturday’s matchup, they have a game of their own to play: their classic always-improving, get-in-the-grooving hacky sack warm-up. And who knows – maybe they’ll even make it to fifteen this time.