Though neither Harvard nor Radcliffe set a date on the books, they confirmed what had been a long time coming: a merger between the two schools would be inevitable. After much back-and-forth, Radcliffe made a public commitment in February 1969 to uniting with its neighbor in the foreseeable future.
By Katelyn X. Li 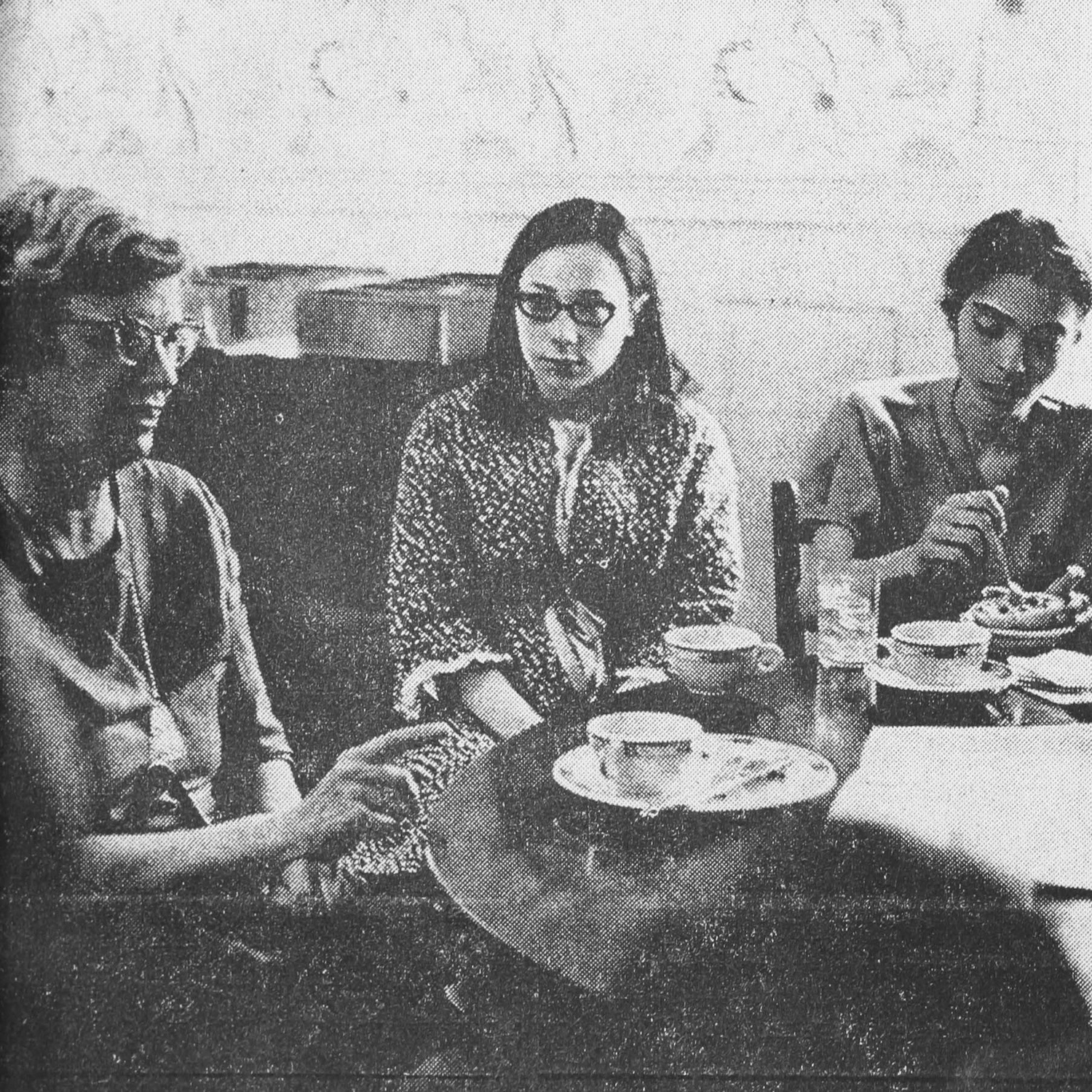 Women meet in the midst of the Harvard-Radcliffe merger. By Courtesy of The Harvard Crimson Archives

Though neither Harvard nor Radcliffe set a date on the books, they confirmed what had been a long time coming: a merger between the two schools would be inevitable. After much back-and-forth, Radcliffe made a public commitment in February 1969 to uniting with its neighbor in the foreseeable future.

On March 3, 1969, the Harvard Corporation — the University’s highest governing body — officially voted to begin the merging process — a decision that would end nearly a century of separation between the two institutions.

The merger came on the heels of a broader national trend toward co-education, according to Eleanor T. Hobbs ’69. Two of Harvard’s peers — Princeton University and Yale University — announced they would begin to admit women in the same year. These moves toward gender equity coincided with the rise of second-wave feminism — a movement during which women began to question traditional gender roles, Hobbs said.

The implementation of the union would involve meticulous planning. Administrators spent the months following the vote figuring out how to operate as one co-educational institution and resolve long-lasting inequities between Harvard men and Radcliffe women.

Radcliffe alumna Ruth M. Moscovitch ’69 said many conversations at her reunions today revolve around “the way [Radcliffe students] were treated back then.”

“I will tell you that a lot of time at reunions, on the part of my Radcliffe classmates, has been spent with what I would call ‘speaking bitterness,’ sort of getting it all out of our system,” Moscovitch said.

‘A Mile Apart and Separated’

Founded in 1879, Radcliffe College opened its doors in Cambridge, branding itself as an institution dedicated to women’s education under the leadership of its first president, Elizabeth C. Agassiz. Radcliffe was then granted an official charter by the Commonwealth of Massachusetts in 1894.

The early charter seemed to hint at the inevitability of the union between Harvard and Radcliffe. The document stated that Radcliffe’s funds and property could — at any time — be passed over to Harvard, if such a move would benefit both institutions in their educational goals.

The process to achieve that mutual benefit took the form of discussions over several topics between Harvard and Radcliffe in the late 1960s and early 1970s. Much of the conversation centered on undergraduate housing, as students of both colleges pushed the administration to support coeducational residence.

Prior to the merger, women lived in dorms in the Radcliffe Quadrangle — also known as the “Quad” — while the men resided in Harvard houses alongside the Charles River in what Hobbs described as “separate but unequal housing.”

Several Radcliffe students said they were deprived of the same educational enrichment opportunities that men had outside of the classroom. Women were barred from joining the Harvard House communities, which led them to push for integration of the house system.

In Radcliffe’s early existence, classes for Radcliffe women were separate from those for Harvard men, though they were all taught by Harvard professors, according to the College’s website. In 1946, Harvard’s classes became co-ed, though Harvard faculty members were responsible for the academic training of Radcliffe students, and played no part in their social or extracurricular involvements.

Then-Radcliffe president Mary I. Bunting attempted to introduce a more vibrant house life to the school’s dormitories, but Hobbs said it still did not match up to Harvard’s house life.

“There weren't fellows and alumni and faculty living there, and there weren’t rigorous academic lunches and dinners and things like that,” Hobbs said. “It was sort of really watered down.”

Hobbs and others including Moscovitch and Judith T. Seligson ’72 said the distance from the Quad to the Yard posed significant difficulties on Radcliffe students’ daily schedules and resulting commutes. Radcliffe students were also not permitted to eat at the River houses, which were closer to the main academic buildings on campus.

Paul D. Guyer ’69 said the commute was a “pain in the neck” for female students.

“Undoubtedly, there were guys who knew and dreaded the fact that integrating the housing system meant that some Harvard guys would end up living up on Garden Street, and then they would have to do the schlepping,” Guyer said.

Beyond the commute, the separated housing made it extremely difficult to connect with students outside of their own institution, according to Seligson. Hobbs said both Harvard and Radcliffe dormitories maintained “parietals” — rules that governed visits from those of the opposite gender – that restricted men and women from spending time in each other’s residences.

Seligson said the residential arrangement was like “living a mile apart and separated.”

“We both got Harvard degrees, we were all going to school together, but it just seemed difficult to get to know each other,” Seligson said.

The student body overwhelmingly favored co-ed housing. In a December 1968 poll administered by a joint Harvard Policy Council and Radcliffe Union of Students subcommittee, 90 percent of students at Harvard and Radcliffe voted in favor of co-ed housing options in some dormitories.

Seligson said she and Jared K. Rossman ‘71 — members of the subcommittees — led the group to sponsor a petition demanding co-educational housing in February 1969.

That petition — signed by over 2,000 Harvard and Radcliffe undergraduates and presented to the Corporation — demanded that co-ed housing be a top priority and that the integration changes be made prior to the completion of an institutional merger, according to Seligson.

In 1972, men first entered into the lottery for housing in the Quad and, five years later, the two institutions achieved financial integration. The merge was not officially completed, however, until 1999, according to the College’s website.

Reflecting on the integration of the residential system, Hobbs said it was interesting to watch the men experience the inconvenience associated with the Quad Houses.

“It was the year men were assigned down to the Quadrangle that they started the shuttle system,” Hobbs said. “Isn’t that ironic? Of course, the guys couldn’t walk that far.”

Beyond housing, Radcliffe alumni like Moscovitch also said they were frustrated about how they had been routinely denied access to Harvard libraries and athletic facilities.

“The biggest example was that we were not allowed into Lamont Library,” Moscovitch said. “And if you took certain courses, the books that were on reserve for that course were all in Lamont Library.”

Hobbs — a member of Radcliffe’s swim team — said Radcliffe students were not allowed to swim in the indoor athletics facility, now known as the Malkin Athletic Center, until 1970.

“We always had to swim in the old Radcliffe pool, which was down in the yard, and it wasn’t even a standard size pool,” Hobbs said.

Moscovitch said many of these restrictions caused Radcliffe women to feel like “second class citizens.” Moscovitch noted this sentiment was heightened by the dearth of female professors at Harvard.

Marian B. Schwartz ‘73, who studied Slavic Studies, said her department would not allow female faculty to teach its literature classes.

As co-education became a legitimate future for Harvard and Radcliffe, Seligson said there were concerns regarding how the two institutions with very different traditions, student populations, and services would be integrated. In particular, these questions centered around how to navigate the four to one ratio of male to female students without lowering male acceptances or exceeding Harvard’s funding limits.

Despite the benefits of the merger, some Radcliffe women worried that uniting with Harvard would erase the history of women’s education at Radcliffe.

“A lot of women, and rightly so, didn’t want to relinquish Radcliffe identity,” Seligson said.

In particular, Ellen Messer ‘70 — the then-president of the Radcliffe Union of Students — said she hoped that the merge would not lead the Radcliffe students to “submerge” and lose their input into institutional processes at the school.

“This was the aspect of Radcliffe you would now say had a comparative advantage, that it had actually developed the institutions where students talked to administrators, we talked to the Radcliffe Counsel, we talked to the Board of Trustees on issues that were relevant to student life,” Messer said. “We were way ahead of Harvard in that respect.”

As for Radcliffe itself, the institution’s legacy now lives at the Radcliffe Institute of Advanced Study — an institution dedicated to “creating and sharing transformative ideas across the arts, humanities, sciences, and social sciences,” according to its website.

Schwartz called the merge “one of the best things Harvard could have done.”

“It just lifted all kinds of tension and conflict,” she said. “And it made us more like normal human beings, rather than having this artificial separation, which was pretty severe.”