The headline was, clearly, inaccurate. Harvard had simply tied Yale 29-29 in the fourth quarter. But according to William M. “Bill” Kutik ’70, one of the Crimson editors credited with running the headline, there was a general consensus that Harvard had won in spirit.
By Isabel L. Isselbacher and Samantha J. O'Connell 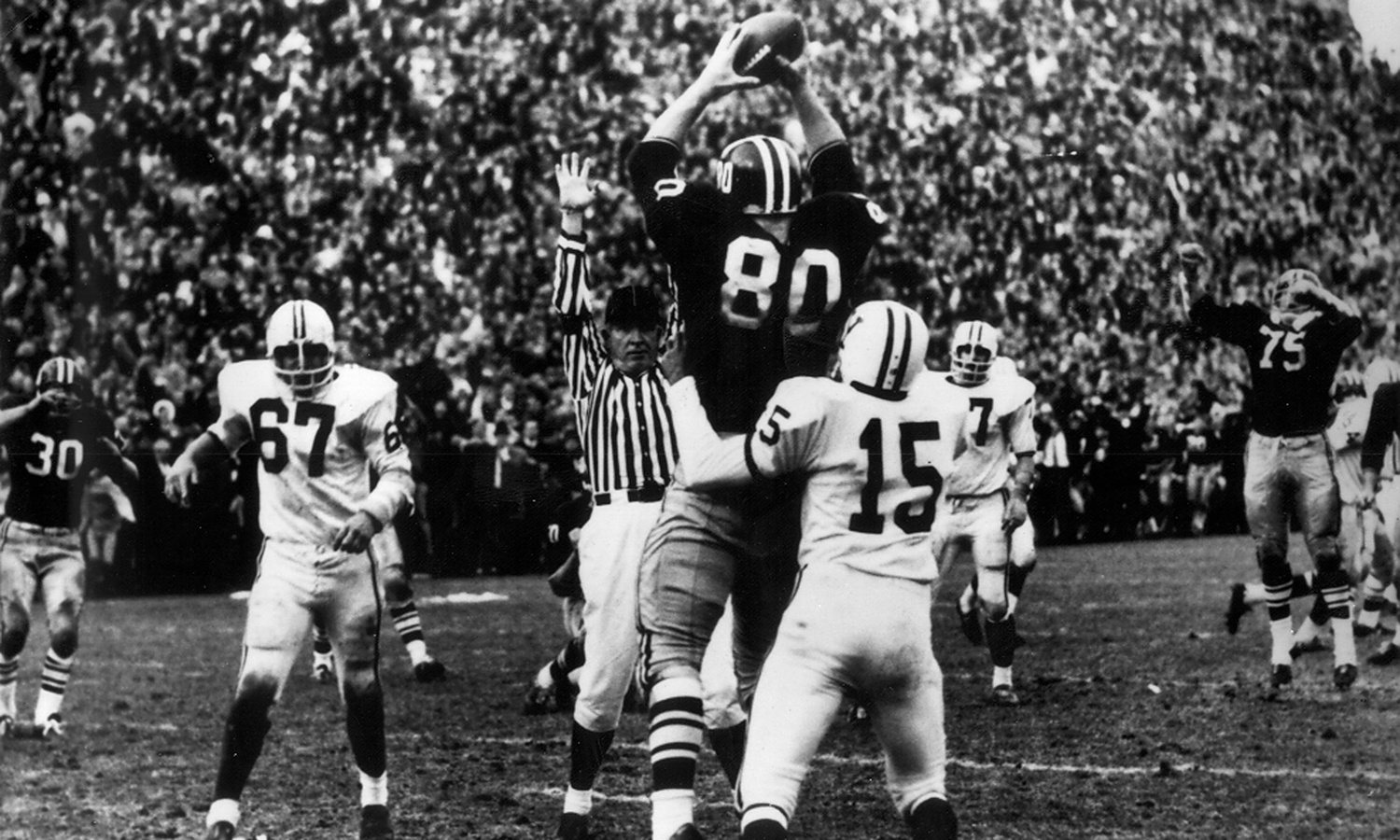 The 1968 Harvard football squad (bottom right) entered The Game undefeated, 8-0. The 29-29 tie gave the Crimson a share of the Ivy League title that year. By Courtesy of Harvard Athletic Communications

On the morning of November 24, 1968, the day after the annual Harvard-Yale football game, The Crimson distributed newspapers emblazoned with a headline that would later become nearly as iconic as the ritual itself: “HARVARD BEATS YALE 29-29.”

The headline was, clearly, inaccurate. Harvard had simply tied Yale 29-29 in the fourth quarter. But according to William M. “Bill” Kutik ’70, one of the Crimson editors credited with running the headline, there was a general consensus that Harvard had won in spirit.

“The headline perfectly captured the emotional sense of the game,” Kutik said. “Even though it wasn't true in fact, it was true in feeling.”

“The first 59 minutes were actually kind of a boring game,” said former tight-end John F. Cramer III ’70. “Yale ground down ahead and had this apparently insurmountable lead. And then there's the last minute.”

Harvard was facing off against a Yale team that included running-back Calvin G. Hill, soon-to-be drafted into the NFL and voted “Rookie of the Year” a year later. Though Harvard was emerging from an undefeated season, Yale was the favorite, according to Cramer. In the fourth quarter, the Bulldogs held a substantial lead: the scoreboard read 29-13. Yale’s victory seemed set in stone.

The tenor in the stadium changed, however, when Frank K. Champi ’70 threw a pass to right-end Bruce M. Freeman ’71 in the final minute of the game. Freeman took the ball to the endzone. And Harvard topped off this game-changing touchdown with a subsequent tw0-point conversion.

Fifty years later, Freeman still remembered the moment well. “[Champi] threw a perfect pass. I didn't even run into the end zone. I sort of jogged and thought, ‘That was easy,’” he said.

Freeman attributed his ability to perform under this pressure of near-definite impending loss to “relentless preparation” and good coaching.

“I was never really worried I was going to forget a block,” he said. “It didn’t occur to me that I might drop a pass. No nervousness when you're really well prepared.”

While players managed to maintain their composure, the crowd exploded, Carner said.

“The atmosphere became very charged at that point. Even though it was unlikely, there was a possibility,” he said. “In order for the outcome to occur, as it did, probably 10 or 15 things happened that all had to go Harvard's way. So it's kind of like, if you flip a coin 15 times and it comes up heads every time”

That near impossibility became reality when Harvard scored yet another touchdown and Richard F. “Pete” Varney ’71 scored a two-point conversion.

Former Crimson editor Peter D. Lennon ’70 had been assigned to cover the game and said he had sought to reflect the enthusiasm of the stadium in the story for the paper’s readers.

“At some point, I went from trying to be a reporter, and stay focused and calm, to being a fan,” Lennon recalled. “So at some point during those 42 seconds, which seemed like the longest 42 seconds I had in my young life experience at that point, I just knew we were going to win.”

“I'll tell you, everyone on the Harvard side felt like they had won,” Kutik explained.

That Saturday afternoon, The Crimson distributed a one page extra, which included a play-by-play description of the game. Kutick said because everyone already knew the factual score by Sunday, The Crimson felt it could be more creative with its reporting for the Monday paper.

While reviewing the paper that Sunday night, then-production supervisor Pat R. Sorrento and former Crimson editor William C. “Bill” Bryson ’67 initially protested the headline because it was not factually accurate. But neither Sorrento nor Bryson had attended the game and Kutik eventually convinced them to give the headline a green light by describing the events of that day’s game.

“Two half-minutes before the game ended, Yalies were unspooling rolls of toilet paper from their side of the stadium, and cheering and screaming because they knew for sure that they had won the game,” Kutik said he remembered telling them. “And then when those unbelievable 16 points were scored in the last forty two seconds, emotionally, they all felt they had lost.”

Convinced, Sorrento and Bryson gave the go-ahead to print the headline. Bryson proclaimed: “Run it!”

The following morning, Kutik said he recalled Harvard students cheering in Adams House as they read the newspaper at breakfast. Later that week, The Boston Globe named the title as the headline of the year, he added.

“People loved it,” he said. “Even those who hadn't been at the game loved it because it was just so oxymoronic in some ways but yet so true.”