Tommy Lee Jones ’69: The Only Football Player who Acted

Three decades prior to winning the Academy Award for Best Supporting Actor for his role in the 1993 film “The Fugitive,” Tommy Lee Jones ’69 took on several roles as a Harvard undergraduate.
By Elizabeth X. Guo 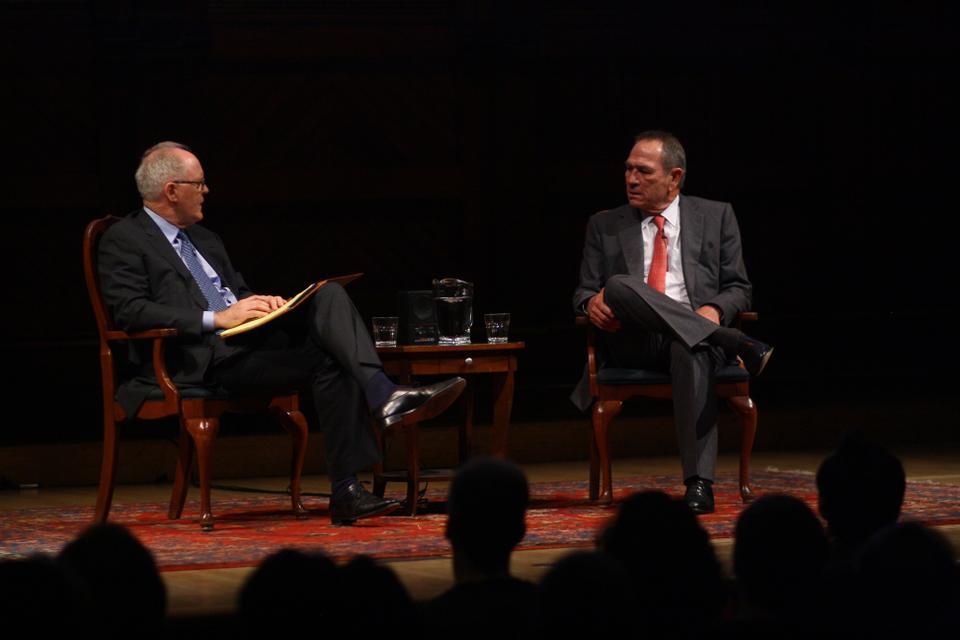 Tommy Lee Jones '69, right, was honored with a Harvard Arts Medal in 2012. By Shunella Grace Lumas

When Joseph C. McGrath ’69 heard repeated thuds outside his freshman year dorm room, he looked out his window to investigate the source of the noise.

“There was a guy hunkering down outside the window with this piece of grass in his mouth, and he had this great big-ass knife, and he was throwing it into a circle in the tree right there in front of Phillips Brooks House,” McGrath said. “And that was Tommy Lee Jones.”

Three decades prior to winning the Academy Award for Best Supporting Actor for his role in the 1993 film “The Fugitive,” Tommy Lee Jones ’69 took on several roles as a Harvard undergraduate. A Dunster House resident, Jones concentrated in English and American Literature and Language, performed on stage at the Loeb Drama Center, and played varsity football as an offensive guard.

In their recollections of Jones, his former classmates spared no superlatives — they called him “a force of nature,” “intense,” and “a very unusual character.” Theodore E. Skowronski ’69 — one of Jones’ former teammates — called Jones a “great subject.”

“Sometime, I hope, some Harvard undergraduate looking for a thesis topic would take up the life story and the movies of Tommy Lee Jones,” Skowronski said.

Originally hailing from San Saba, Texas, Jones attended the all-boys St. Mark’s School of Texas in Dallas and graduated in 1965.

Jones’ high school classmate Lee S. Smith ’69 said Jones’s interest in acting pre-dated his time at Harvard. In their senior year, the pair acted in their school’s production of “A Man for All Seasons.”

“Of course, he had the lead role,” Lee Smith said with a chuckle.

When Jones crossed the country for his freshman fall, he moved into Mower B-12, where former United States Vice President Al Gore ’69 lived just across the hall. Gore and Jones became good friends and, later, roommates in Dunster.

“He is a great guy and a wonderful, lifelong friend,” Gore wrote in an emailed statement.

Jones — an eighth-generation Texan living in Cambridge — had distinct pride for his roots, according to his classmates.

“I would say first and foremost, he was a Texan,” Skowronski said. “He talked about working in oil fields as a roughneck, summers in college bucking broncos.”

Aside from his Texas background, Robert C. Panoff ’69 said Jones had a “very intense” personality.

“He comes across as being a quiet, almost taciturn, kind of guy,” Panoff said. “But he’s got this rumbling, guttural laugh when he actually does laugh, which is pretty funny too,” Panoff said.

Skowronski said conversations with Jones often consisted of long pauses that punctuated the conversation before Jones would make a comment that was “sort of out of context” but nevertheless “very insightful.”

On the Football Field

Jones brought his characteristic intensity to the football field, his former teammates said.

During Jones’ time at Harvard, freshmen played on a separate football team from that of the upperclassmen. Jones joined the freshman football team his first semester alongside more than 100 other players vying for playing time. Skowronski said the two initially “butted heads” upon joining.

“We came up against each other in drills, blocking each other, competing,” Skowronski said. “But over the years, as we got to know each other, we became very, very close teammates.”

Standing at just over six feet, Jones was considered relatively undersized for his position, according to Skowronski. But McGrath noted he had the “quickest feet” on the team.

“He would do anything to complete the play, to fulfill the assignment,” Skowronski added. “He would go longer in a drill than most players.”

Jones bonded with his teammates over the years and worked out with them over the summer, according to Skowronski and Anthony M. Smith ’69, who recalled a time he and Jones did repeated sprints.

“I said, ‘Jonesy, let’s run this again.’ He said, ‘Oh, let’s not.’ I said ‘Please, let’s run it again,’” Anthony Smith said. “I should have listened to him because I pulled my hamstring, and that became a kind of injury all year.”

That fall, Jones and his teammates played in the famed 1968 Harvard-Yale Game that prompted the Crimson headline “Harvard Beats Yale 29-29.”

Former football player Stephen S. Gloyd ’69 said the team was “lucky” to have won because they had been trailing Yale. Gloyd said Jones had an “important” role in the game. According to Gloyd, Jones was on the field for the last two scores of the game.

In 2008, Kevin G. Rafferty II ’70 filmed a documentary titled “Harvard Beats Yale 29-29” that features Jones, recounting the match and recalling the players’ lives on campus at that time. Jones returned to Dunster in 2010 to present a screening of the documentary.

Skowronski said he considered himself “the luckiest guy in the world” because his last two plays — a touchdown and extra point — brought the team up to the final 29 points and solidified the team’s place in Harvard’s history for years to come. 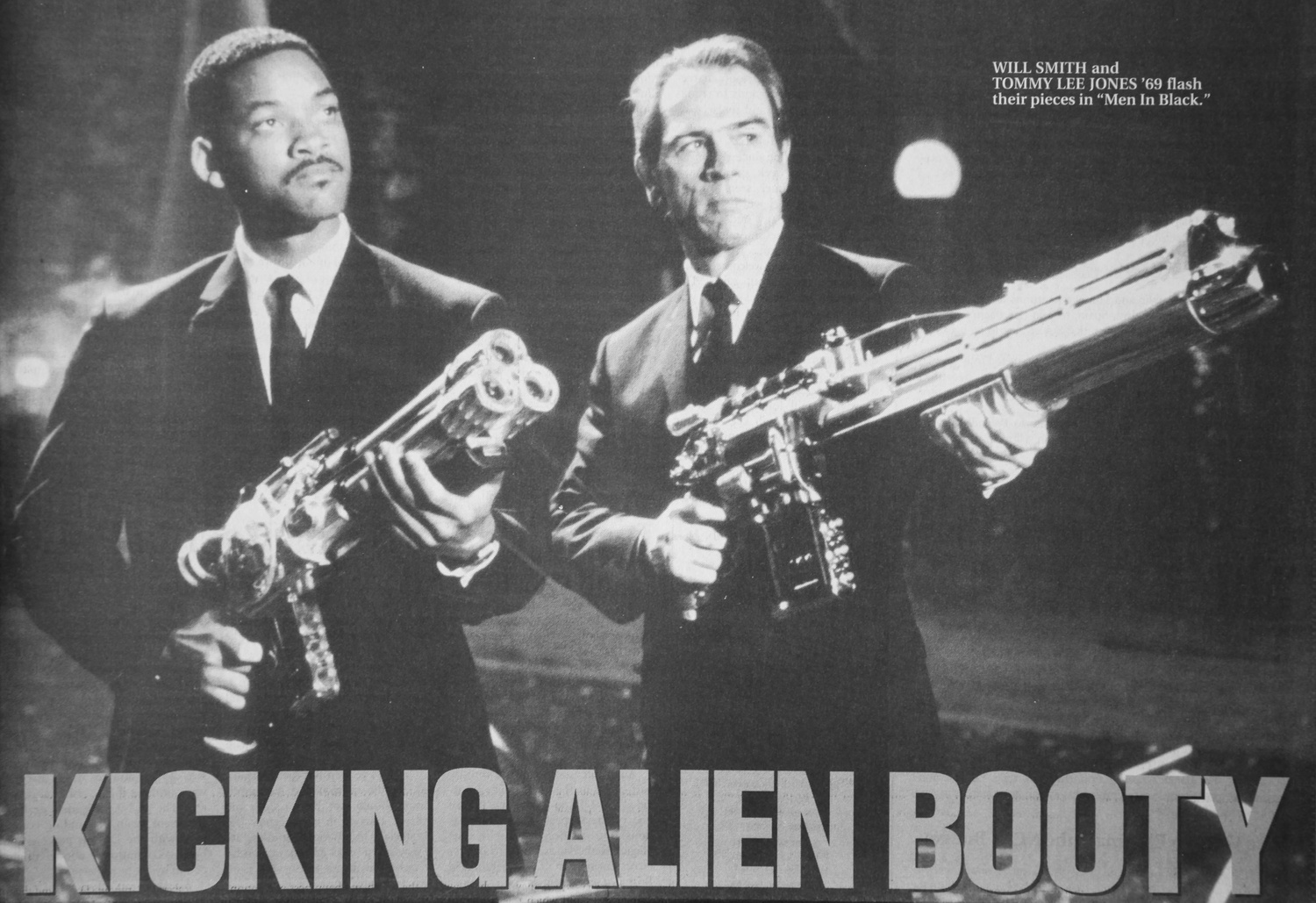 Tommy Lee Jones '69 and Will Smith appear in an advertisement for Men In Black. By Courtesy of The Harvard Crimson Archives

Jones’ teammates witnessed how he juggled his roles as student, athlete, and actor throughout his time at Harvard. Many recalled the familiar sight of Jones changing into a costume at the end of practice and dashing out of the locker room for play rehearsal.

Former offensive guard Alan D. Bersin ’68 said Jones immediately rushed from “the violence of the football field to the elegance of a theatrical production” as other players retired for a typical evening of homework and sleep.

Jones performed in and directed a number of plays at the Loeb, including “Everyman” and “Coriolanus.” Former football captain Victor E. Gatto, Jr. ’69 said he would regularly watch Jones performing there with a group of teammates and their dates.

After watching “Coriolanus,” former football player Anthony M. Smith ’69 said he began to recognize Jones’ versatility in his many activities.

“I remember thinking, ‘My God, what does it take to do an academic load, play football, and act?” he said.

But Jones’ interest in the arts spanned other mediums. He joined the Signet Society — an arts and literary organization — and explored literature through his senior thesis, which focused on Catholicism in the work of Southern writer Flannery O’Connor.

From Harvard to the Silver Screen

Around the time of their graduation in 1969, Anthony Smith asked Jones about what he planned to do after the war. He said Jones responded with one word: “Act.”

Not long after, Jones made his movie debut in 1970 playing a Harvard student in “Love Story.”

Upon watching the film, Skowronski said he did a “triple-take” as he watched Jones appear on screen exactly how Skowronski remembered him as an undergraduate student: decked out in a “DeeHa” (Department of Harvard Athletics) sweatshirt.

Former football player Stephen S. Gloyd ’69 said he began to view Jones as a Hollywood “star” when he appeared in the 1980 film “Coal Miner’s Daughter.” Gloyd said whenever he watches Jones on the big screen, he is constantly reminded of his former teammate’s “gruff” and “brutally honest” demeanor in his college days.

Even with his fame, Lee Smith said Jones refuses to be regarded as an “idol.” Former football player Anthony Smith said he remembered once attempting to disguise Jones as they walked around Harvard Square after their graduation, even briefly considering sunglasses.

“This was the wrong actor to give sunglasses, because of ‘Men in Black.’” he said, referencing Jones’ role in the 1997 film.

The Oscar-winning actor has been recognized both globally and at Harvard for his distinguished career. In 2012, former University Drew G. Faust awarded him the Harvard Arts Medal — an award given annually to alumni of Harvard or Radcliffe for their achievements in the arts.

“I believe my experience here was the best thing that happened to my creative life,” Jones said at the ceremony. “For that, I will be grateful as long as I live.”

Jones has returned to Harvard often since graduating. He and his teammates consistently reunite every other year when Harvard hosts The Game in Cambridge. On the evening of the Game, Jones hosts dinner at the Signet for about a dozen of his former teammates, according to Skowronski.

“I don’t think he’s lost touch with common roots,” Anthony Smith said. “Even in all the money and fame.”