Off to the Horses: Tjerk van Herwaarden, Coach of the Year

Over that time period, Harvard accumulated four hat tricks – also a record – and clawed their way up to 6th in the country.
By James Joyce 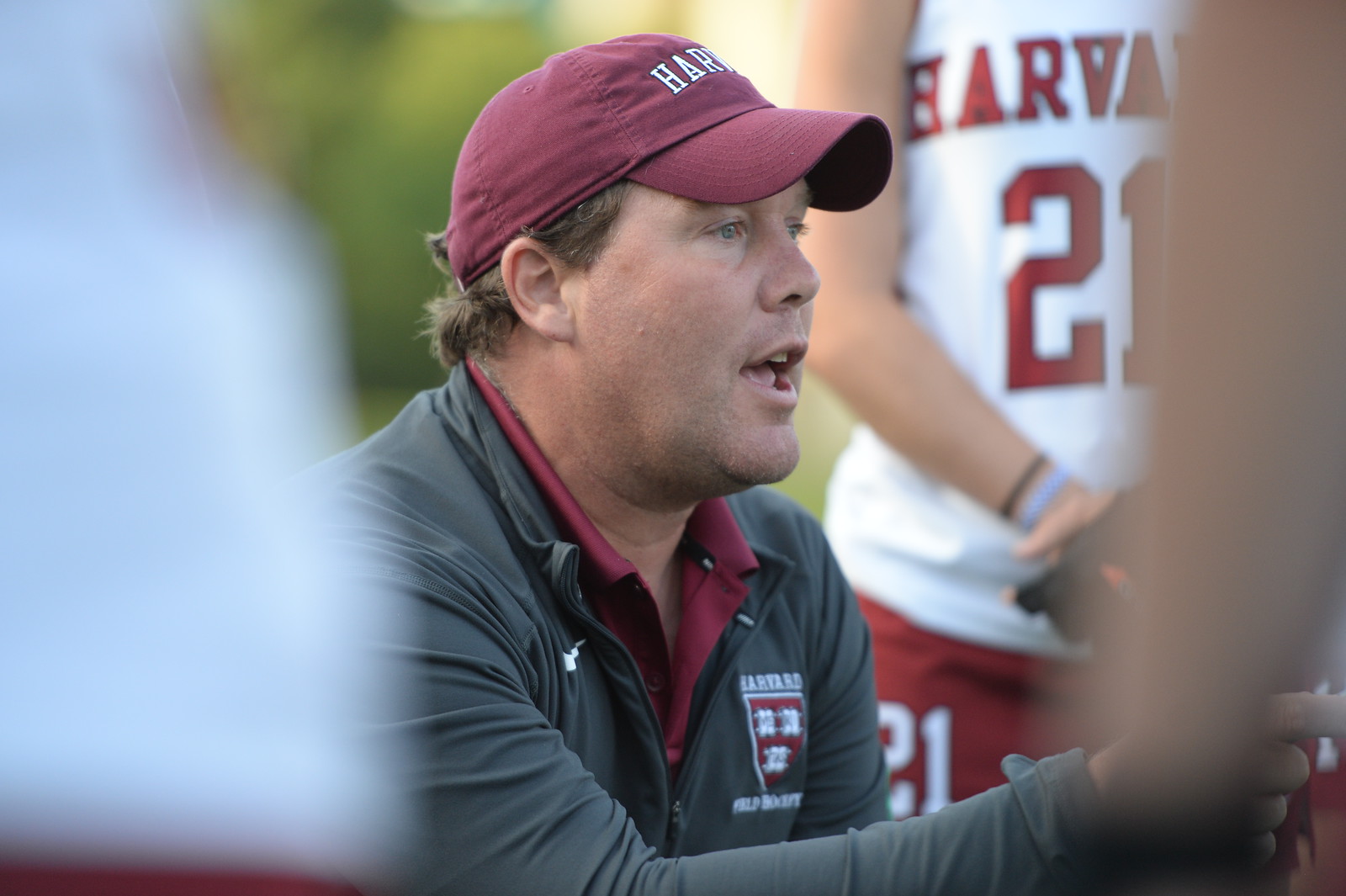 Harvard field hockey moved into the Top 10 national rankings this season, a meteoric rise for a program largely in the periphery in years past. By Courtesy of Gil Talbot/Harvard Athletics

The training room saw Kathleen Young’s tears twice that day. The first cry was one of agony: the Harvard forward, a junior who was emerging as the team’s top scorer, had just gotten her season cut short by a devastating injury to her ACL. If her first bout of tears was produced by pain, however, the second was induced by laughter, a vital act of repair to reverse that somber fit of despair.

You see, on field hockey, Crimson coach Tjerk van Herwaarden is Cambridge’s gametime guru: by the age of twenty-eight, he was the youngest assistant coach in the Netherlands’ premier field hockey league; over seven seasons at the University of Maryland, he won five national championships; and during this past season at Harvard, he brought the team to its highest national ranking in history. But on horseracing, along with the oft-times perplexing patois that is spoken by its followers, van Herwaarden still has a ways to go.

“Last year, Coach had this new phrase that he would say – he’d go you’ll be off to the horses in no time,” Young said. “The first time he said it, we all looked around at each other, baffled, before realizing that he was combining get on your horse and off to the races. He kept mixing those up that year and no one corrected him.”

“I kept saying it every now and again – I’m pretty sure the team thought I was saying it every week, but I don’t think it could’ve been that much,” countered van Herwaarden, his recounting of the story inundated with the occasional chuckle. “But, of course, nobody felt the need to correct me.”

“Finally, the day I got hurt, he comes running into the training room,” Young said. “We were all very sad – I’m crying – and he comes in and goes ‘Hey, you’ll be off to the horses in no time!’ That’s when I just lost it. I was crying so hard that tears were running down my face.”

“That’s when Kathleen tells me that I’ve been saying it wrong this entire time,” van Herwaarden said. “It amazes me that it lasted as long as it did, but I think that moment was much needed comic relief.”

“But it didn’t stop there,” Young said. “At the end of the every year, the freshmen paint a brick in our locker room for the outgoing seniors that tell the story of that year. Last year, they painted the brick with the phrase off to the horses – now, it’ll be there forever and he has to explain it to all the recruits.”

It’s that comedic nature, that ability to “create laughter when the team really needs it,” as Young puts it, that allowed van Herwaarden to lead his team to a record-breaking seventeen wins this season – the most in Harvard field hockey history – and earn The Crimson’s title of Coach of the Year.

“I’m still very excited about this season,” said van Herwaarden of the most successful run the team has ever had. “We lost some key players, so we had to look for people to rise to the challenge. I actually think that our first game this season – even though we lost to Maryland – showed us just how much potential this group had.”

Though their November matchup against the No. 3 Terps went down as a loss, Harvard had little to regret. Not only did freshman Ellie Shahbo make ten saves, but it was after this game that the Crimson launched a fourteen-game win streak, the longest in their history. Over that time period, Harvard accumulated four hat tricks – also a record – and clawed their way up to 6th in the country. Though women in crimson were the ones scoring shots and securing saves, they attribute much of their success to Coach van Herwaarden himself.

“He’s responsible for a great deal of [our success],” Young said. “I mean, he’s an expert in field hockey. He really knows the game, but he also brings that passion and enthusiasm not just for the game, but for us.”

Though van Herwaarden’s attitude has remained steadfast over his seven seasons as head coach, his situation most certainly has not.

“My first couple of years here were quite different than the past two,” van Herwaarden said. “I knew it’d be a challenge to take over a program that was ranked 63rd in the country, and I think that first two or three years were very tough – I was still searching for what this program would be. But as more work was put into [the team], slowly but surely, you could see us moving up from 60th to 50th, 50th to 40th, and then to the Top 15 and now the Top 10.”

Once van Herwaarden had led Harvard field hockey to the national stage, he set his sights on taking down the most notorious gang in the Ivy League: the Princeton Tigers. As of a few years ago, the last time the Crimson had successfully hunted the Tigers was 1994. That all changed when Young began her crusade in crimson.

“One of the things that sticks out in my mind is Kathleen Young’s goal two years ago against Princeton,” van Herwaarden said. “It was the first time this program beat Princeton in twenty-two years, which is pretty big. During that first year, we had seniors that had never beaten Columbia or Dartmouth or Yale in their four years. Now, the seniors that are graduating have never lost to Columbia or Dartmouth or Brown, and to incorporate Princeton into that nexus is crazy.”

Over van Herwaarden’s last three seasons, Harvard has lost only a single regular season Ancient Eight matchup, a feat that would have been incomprehensible just five ago. His teams credit that triumph with their coach’s penchant for independence.

“I think he once said that his ideal scenario would be getting the team to a point where he can just step back and watch us play,” Young said. “His style is really all about letting us make our own choices and making the game our own.”

However, for van Herwaarden, the field hockey season isn’t solely about sport. To him, the squad is a system of support before anything else.

“I love the quote out of everything really important in life, sport is the least important, and of all the not-so-important things in life, sport is the most important,” van Herwaarden said. “One of the main objectives of this team is being a support system for everyone that’s a part of it and has to deal with everything that comes with Harvard. But when we step on that field, we want to be the best we can be.”

The turf isn’t the only terrain on which the Crimson excel. To van Herwaaden, progress in the classroom is just as, if not more, important than on-the-field success.

“[The players] come to Harvard because of the academics, and that should be their number one priority,” van Herwaarden said. “My program is dependent on making sure that everyone comes to practice every single time, and to do that we need to make sure that each student-athlete can be successful at Harvard. That’s why every year, we have an open discussion with the team about what our goals should be – we always have the athletic goals like winning a championship, but the team also chose to put having an improved team GPA as a goal as well.”

“I remember he had a meeting with all of us as freshmen where he just asked us how our freshman year was going, if we were making friends, if we were having fun in Annenberg, if we had enough time to get our studies done,” Young said. “I think it’s that holistic approach to coaching the team that makes him special.”

According to van Herwaarden, teaching the fundamentals of field hockey – the driving, the blocking, the dragging – is the easy part. It’s fostering those bonds between team members and creating a community of belonging that are essential to the success of the record-setters in Crimson, a group led by the one-and-only Coach Tjerk.

If there’s one word that Kathleen Young uses over and over again to describe her feelings toward van Herwaarden, it’s grateful.

“By taking a chance on us as recruits, he really changes our lives,” Young said. “I mean, he allows us to come play the game we love for the best institution in the world. I think that’s really special, and we’re all grateful for that. No one if more deserving of winning [The Crimson’s Coach of the Year] than him.”

However, van Herwaarden has a peculiar way of speaking about his successes. Every time I brought up any of his victories – his record-breaking season, his ability to create a prosperous work-life balance, his expertise in doing what he loves – he turned his achievements into the accomplishments of his team members.

If one thing has remained constant in van Herwaarden’s life, it’s that he’s always improving. From 60th to 50th, 50th to 40th, and then to the Top 15 and now the Top 10, it seems that the coach has conquered every team, winning every victory imaginable. But as van Herwaarden puts it, there are “always more games to win” – after all, Coach Tjerk will be off to the horses in no time.

— Staff writer James Joyce can be reached at james.joyce@thecrimson.com.