A stalwart in front of the net, the former England U-18 team captain immediately solidified herself as one of the best at her position across the NCAA.
By Henry Zhu 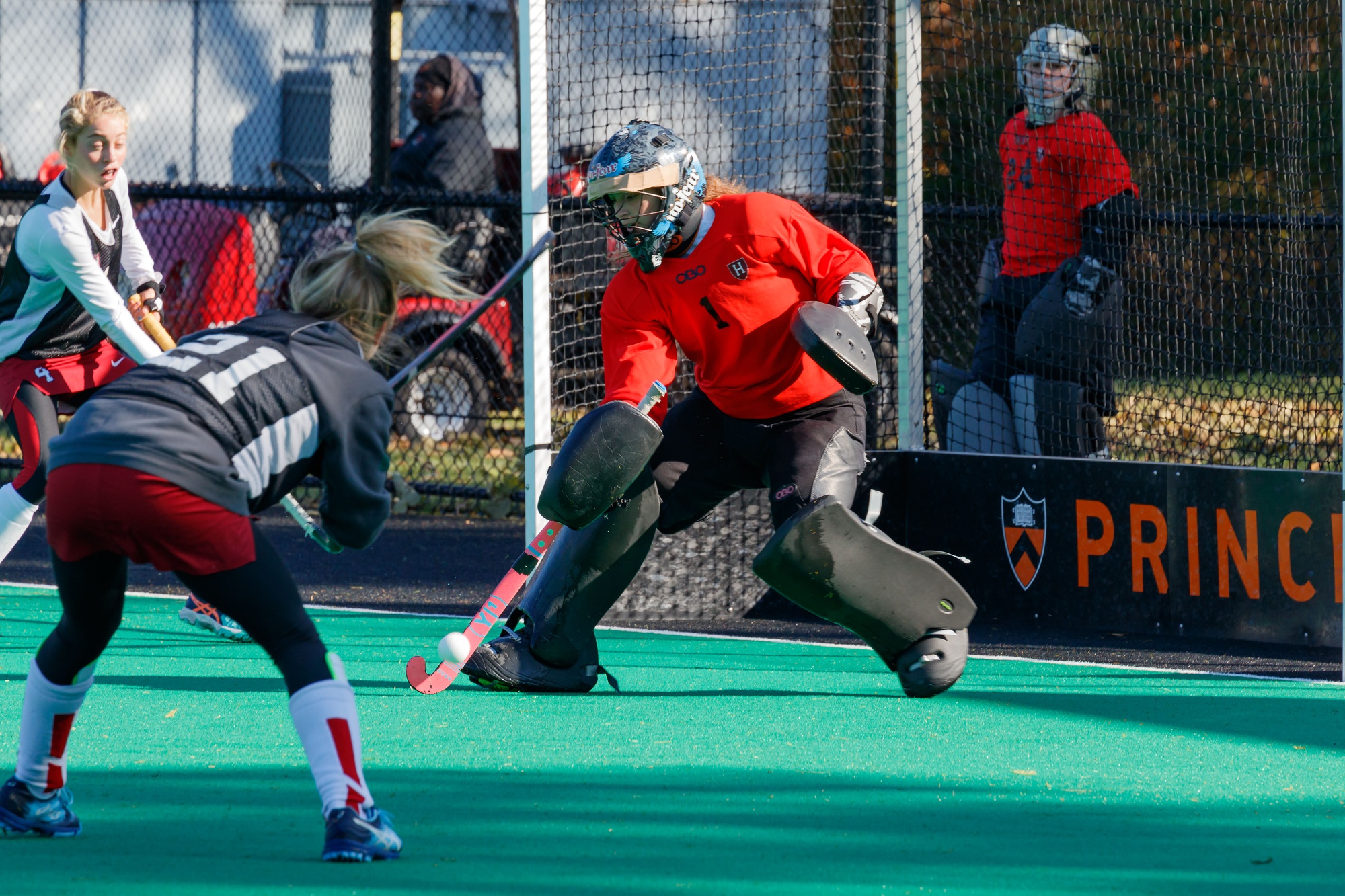 Freshman Ellie Shahbo was named the Ivy League Rookie of the Year at the conclusion of the season. By Courtesy of Shelley Szwast/Harvard Athletics

A historic season by any account, the 2019 Harvard field hockey team finished the season ranked sixth in the nation, earned its first NCAA Tournament win in program history, tallied the most wins in a single season in program history (17), and maintained a 14-game win streak (another Crimson record).

All of these accomplishments occurred remarkably in just Year One for the Crimson’s star goalkeeper, Ellie Shahbo. A stalwart in front of the net, the former England U-18 team captain immediately solidified herself as one of the best at her position across the NCAA. Finishing second in the nation in both save percentage at .804 and goals against average at .70, Shahbo logged three shutouts on way to an 11-2 season record.

Moreover, all of those victories came in the form of an 11-game win streak in which merely four goals went through the Harvard net. The Ivy League Rookie of the Year made seven saves in the final game of that run, holding No.9 Penn State to just one goal in Harvard’s historic NCAA Tournament win in the Round of 16.

“Everyone was determined today and everyone had faith that if we worked that little bit harder over the field and trust the game plan we had set out, we would be fine,” said Shahbo following the win over the Nittany Lions. “The team just had so much grit and determination to win, especially when we put our mind to it.”

Shahbo’s emergence into the Harvard starting side came in the Crimson’s fourth game of the season. Matched up against high-powered No.3 Maryland, the St. George’s College native withstood a blistering Terrapins attack and made 10 saves in that contest, the most by a Harvard goalie since Izzy Davies in 2015. Harvard did not ultimately take home a victory, but that learning experience fueled Shahbo and the Crimson to three consecutive shutout wins. Those three shutouts were also 1,2, and 3 of that historic 14-game win streak.

“We had an outstanding performance by Ellie Shahbo, our freshmen goalkeeper, and saw a lot of good scoring distribution,” captain Kathleen Young said after a 6-0 rout over the Yale Bulldogs. It was a real team effort.”

The Cornelius, N.C., native would go on to make 22 more saves to finish out the season. Outside of the aforementioned game against Penn State, one critical and momentum-shifting win during this stretch was against then-No.3 ranked Princeton on Oct. 20. Having long been an Ancient-Eight powerhouse, Harvard’s dominant 3-1 win over the Tigers which saw Shahbo make three important saves swung the Ivy pendulum in the Crimson’s favor. From that point on, the Crimson rode the driver’s seat on way to an Ivy title and a shot at the national one as well.

“At the end of the game there was literally blood, sweat and tears left on the field,” said the goalie after the win over the Tigers. “Playing big games, like Princeton, is one of the reasons you play sports — to have a challenge to overcome, and the next best thing is getting to do it with people you love.”

Of course, the collective defensive effort in front of Shahbo is one that may not earn its due recognition on the stat sheet, but one in which the goalkeeper made sure to acknowledge throughout the season.

“My defense makes it very easy for me,” said Shahbo with a laugh after the Crimson clinched its fifth Ivy title with a 6-0 win over Dartmouth(only one save was made in that contest). “I don’t actually have to do that much. I was just sitting around getting cold today.”

It is this combination of individual excellence and team effort that ultimately propelled Harvard to a season it will never forget. Shahbo, who was recognized as a Longstreth/NFHCA Northeast Region First Team selection at the conclusion of the season, will lose a dominant group of senior classmates who brought the Crimson into the national spotlight. But she has three more years to maintain that legacy, and perhaps, do even more.

At the very least, one thing is certain: the net is secure for Harvard field hockey for years to come.