As a senior, he has high goals and expectations. Farris will have opportunities throughout next year to prove himself on the national stage heading into the 2020 Olympic trials next summer.
By William Connaughton 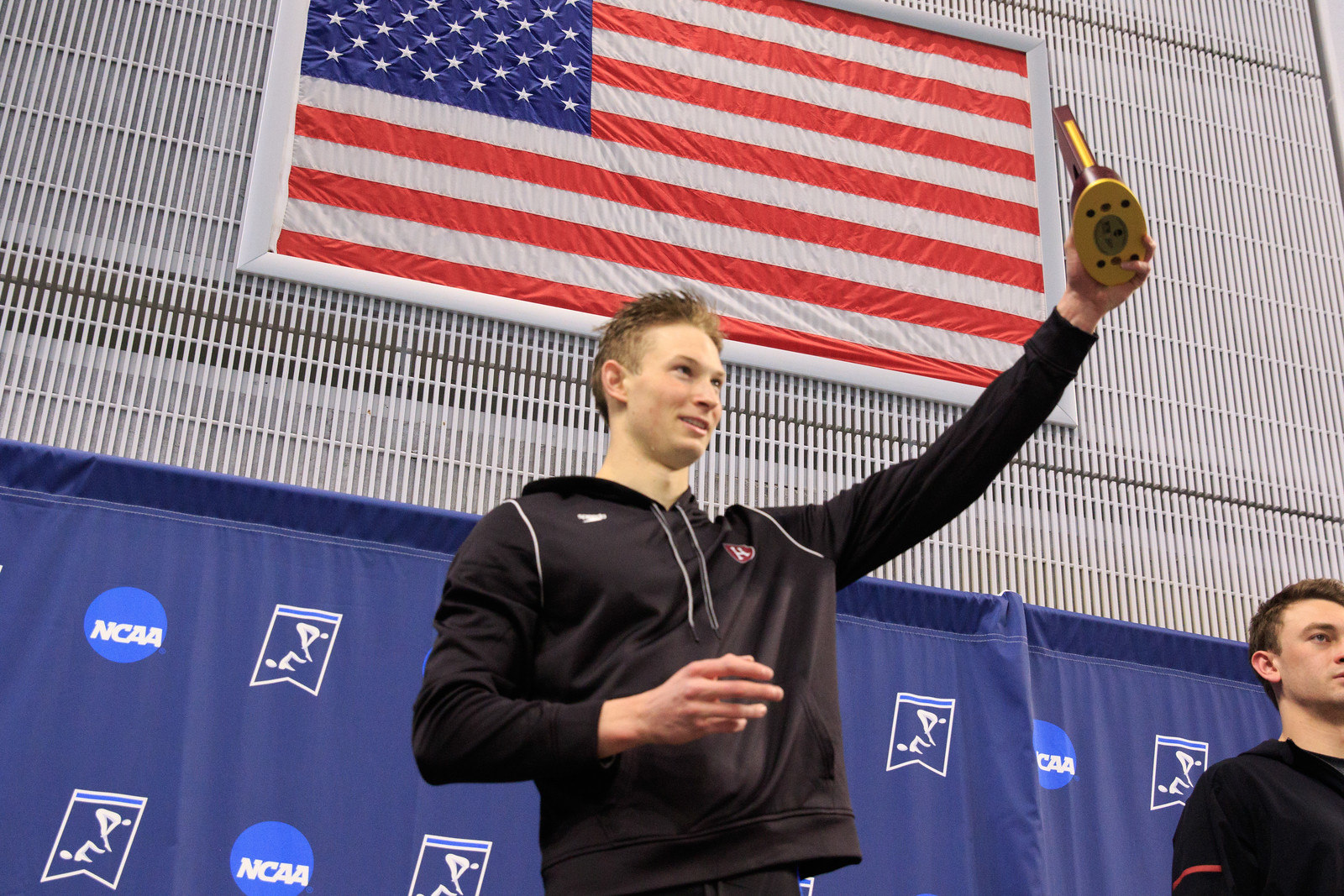 On the first leg of the first event of the first day of the 2019 NCAA Swimming and Diving Championships — in front of a packed crowd in Austin, Texas — junior Dean Farris broke the NCAA and American record in the 200 yard freestyle, swimming the leg in a blistering 1:29.15.

“It felt pretty surreal,” said Farris on breaking the record. “I’ve worked really hard this year and having it pay off was really rewarding.”

This performance beat the NCAA record, edging out the previous record by .35 seconds, set in 2018 by Texas swimmer Townley Haas. Fellow Harvard swimmers Brennan Novak, Mahlon Reihman and Corban Rawls finished off the relay with a strong time of 6:11.73, breaking the all-time program record. The quartet was able to place seventh at NCAAs and was selected for All-NCAA honors.

As the NCAA tournament continued, the Atlanta native only furthered his dominant performance. Farris went on to win the 100 back and 100 freestyle, with times of 43.66 and 40.80 respectively. The junior opted not to swim the 200 freestyle, even though he had set the NCAA record in the event in the relay earlier in the meet.

Nevertheless, as the dust cleared during the NCAA Championships, Farris ended with two solo event wins, becoming the third Harvard swimmer to do so and the first since 1954. In addition, he took home All-American Honors in three individual and two group events, along with two group Honorable Mention All-American Honors.

Farris has always been a talented swimmer. His freshman year, the Georgia native was a NCAA All-American in the 200 freestyle, and broke four Ivy League Championship records.

The following year, Farris received All-American honors in the 200 freestyle and the 200 backstroke. The then-sophomore posted three top times in the nation and was Ivy League Championship co-high point scorer among many other incredible achievements. However, despite all of this success, this year was special for Farris. 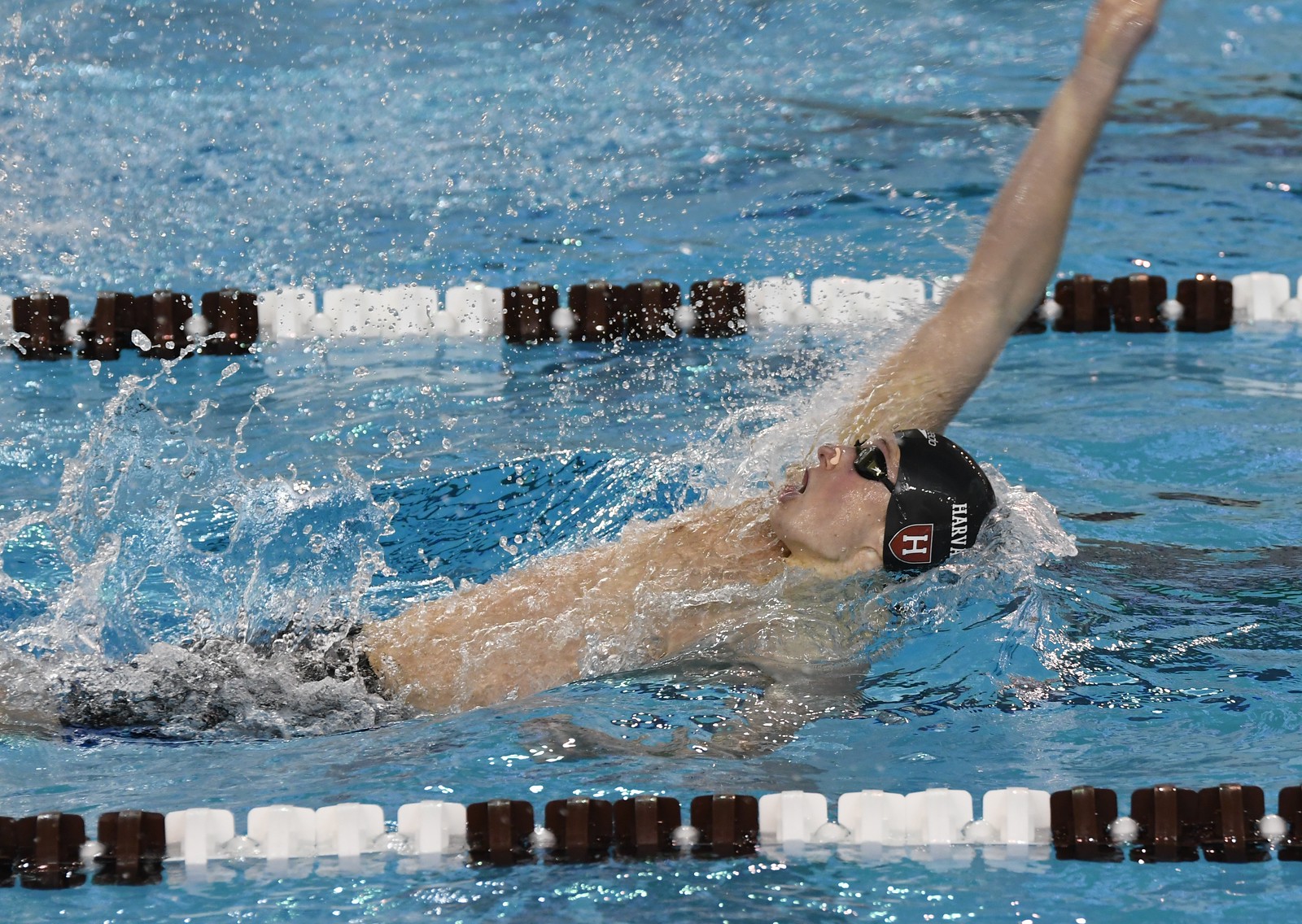 Farris has excelled in both the freestyle and backstroke throughout his collegiate career. By Courtesy of Sideline Photos/The Ivy League

“Dean obviously had very good freshman and sophomore years, but there was something this year where you could sense that he was going to fully break through,” noted Novak on Farris’ season. “He is incredibly focused on the small details of practice and taking care of his body. He sets extremely high goals for himself, and, given his talent and work ethic, it isn’t much of a surprise when he meets them.”

In short, in case it’s not clear, Farris is simply one of the fastest swimmers in the world. The Atlanta product has attributed his success to his coaches and training regime.

“I think just continuing to improve my training,” responded Farris when prompted about how he had so much success this year. “We have a great program at Harvard and we’re always pushing to get better.”

However, the rising senior’s impact goes well beyond simply breaking records left and right. His performance and dedication to the team has inspired his teammates.

“From a team perspective, having one of the fastest swimmers in the world training every day with us at practice obviously is a huge benefit to us,” said Novak on Farris’ impact on the team. “He pushes people in practice and sets high goals for the team as well. He’s definitely one of the main reasons why our focus over the past couple of years has shifted from Ivy League Championships to the national level.”

Looking forward, Farris will continue working and improving this summer. As a senior, he has high goals and expectations. Farris will have opportunities throughout next year to prove himself on the national stage heading into the 2020 Olympic trials next summer. His story will be one to watch next year, as he looks to become the first Harvard swimmer since 2012 to reach the Olympics.