Throughout her childhood, Harvard hockey continued to play a major role even after she moved on from the learn-to-skate to youth teams.
By William C. Boggs 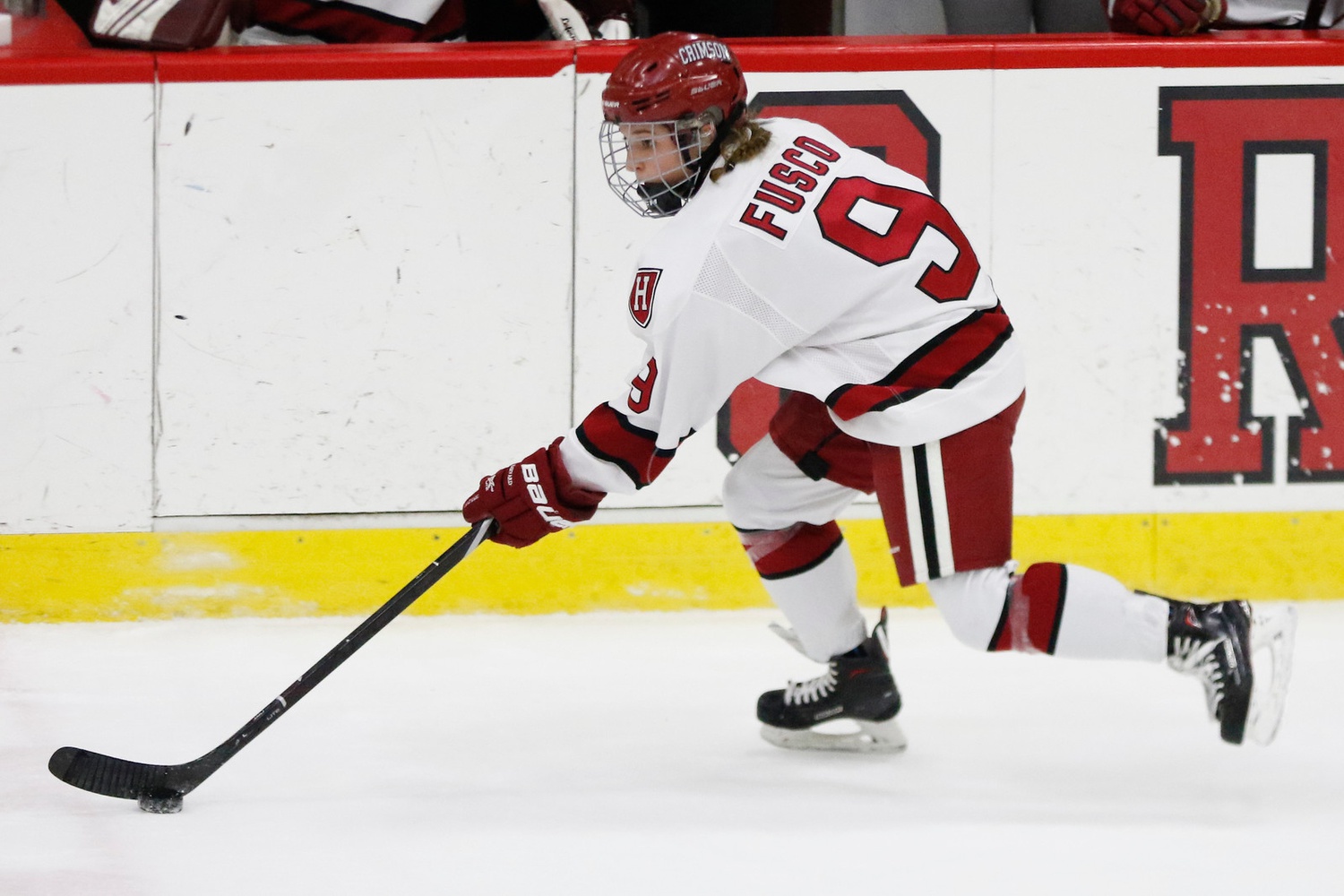 “When I was two years old, I actually learned to skate on the ice at Harvard, so that’s where my memories actually started.”

When Harvard hockey alumni got together on Sunday mornings at Bright-Landry Hockey Center, senior forward Bradley Fusco would be there. Her father, Scott Fusco ‘86, and his brother, Mark Fusco ‘83, rank among Harvard’s greatest players, with both earning the Hobey Baker Award — college hockey’s equivalent of the Heisman trophy — and appearing on professional and US Olympic teams. After the Sunday morning skates, children and families who tagged along would take some family time on the ice and learn to skate. In this setting, Bradley’s hockey career was born.

Throughout her childhood, Harvard hockey continued to play a major role even after she moved on from the learn-to-skate to youth teams. Bright-Landry continued to be a mainstay in her childhood as she regularly attended both men’s and women’s teams’ games. Seeing the women’s team in particular created a vision in her mind and gave her a goal for the future.

“When I was younger, my dad would take me to the women’s games as well, and especially when we could skate with the team afterward,” Bradley said. “And growing up, I had tons of role models on the Harvard women’s hockey team.”

Scott similarly pointed out the importance of the role models, recognizing the invaluable opportunity that they provided his daughter.

“I think she was really fortunate to have the ability to meet some of the players when she was younger, especially some of the women’s players,” Scott Fusco said. “That’s incredibly helpful for a young girl to have role models like that. As you’re growing up in sports...you need to see people sort of just like you that are accomplishing great things.”

In addition to providing access and opportunities where Bradley could learn how to play, meet lifelong friends, and look up to Harvard players, Scott provided something else that few parents can: Division I, Olympic, and professional playing experience. With his wealth of knowledge about the game, he did have and offer plenty of technical advice, but he usually made sure to keep his message very simple: have fun and work as hard as you can.

“We spent a lot of time obviously working on all the skills you need to be a player, but really it was more focused on fun,” said Scott. “The biggest piece of advice I gave Bradley is just to show up every day to practice and work hard—approach every practice like it’s a game—so that not only can you improve, but you give the coaches confidence that you can be successful.” 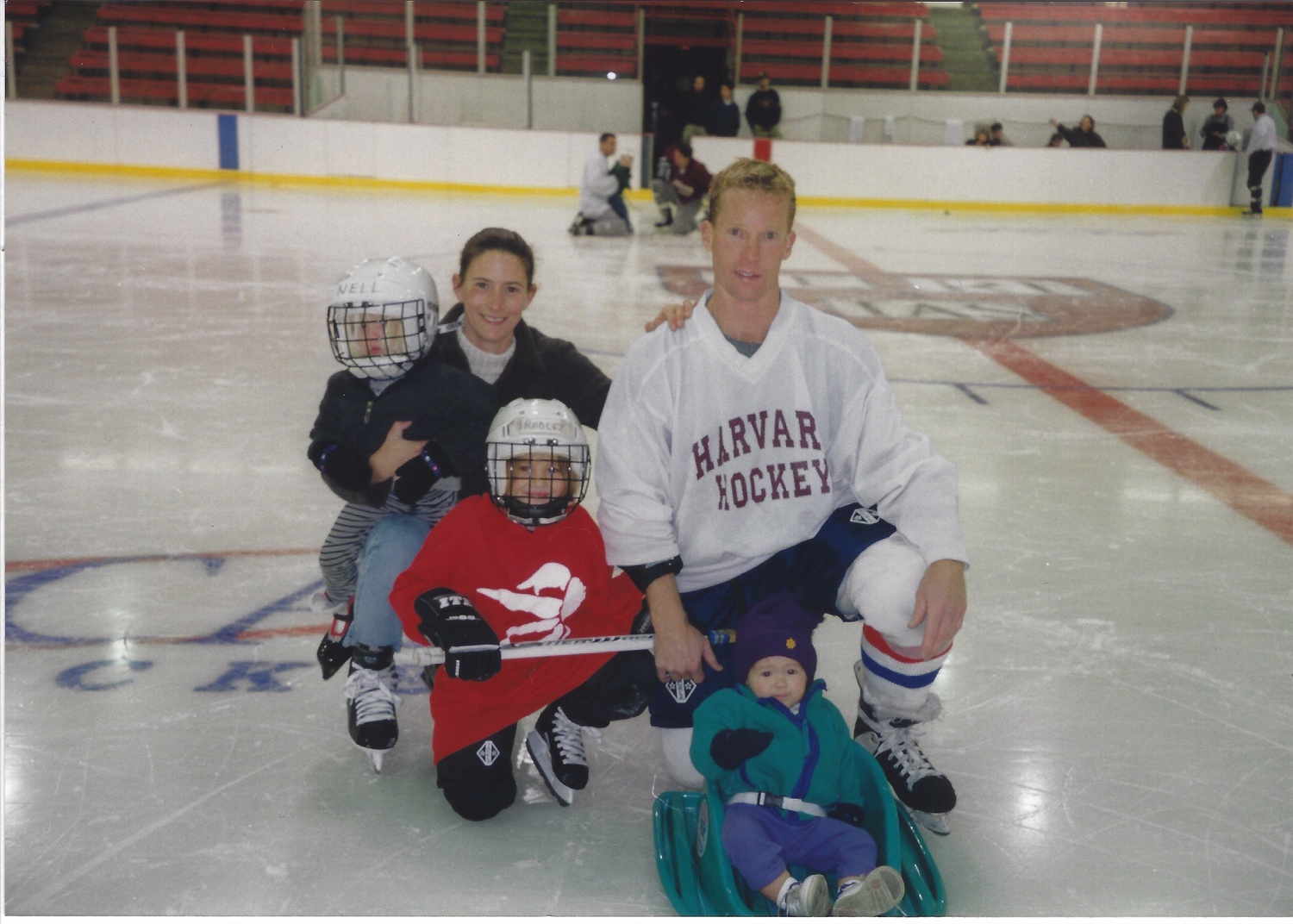 Bradley Fusco is no stranger to the confines of the Bright-Landry Hockey Center, pictured her with her family in 2001. By Courtesy of Scott Fusco

And Bradley seemed to take these words to heart. In her career, one thing that she always prided herself on was work ethic. Knowing that many things can be out of pne’s control, she tried to control one of the things that was within reach and hoped that the result would be infectious.

“Every practice I would try to win every sprint, win every rep...and that was for my personal development, but, moreover, it was to help my teammates get better as well,” Bradley said. “If you see somebody next to you fighting their hardest, it makes them more willing for them to fight their hardest...And I hope that I left that imprint on my teammates so that they can help make their teammates better.”

“She did what we asked her to do. She was always probably the most conditioned, most fit player we had,” Stone said. “She did everything she could off the ice to put herself in a great position, and she worked her tail off. She asked the right questions, and she understands the game, so she was always ‘on.’ When she came down to the rink, she was on a mission.”

In addition to the attitude of hard work, Bradley values a sense of gratitude. On one hand, it’s a sense of appreciation for the accomplishments of her family at Harvard that she is reminded of every time she peers into the rafters, where the Hobey Baker Award banner bears her family name—twice.

“My dad, and my mom, and my extended family put in a ton of time and hard work into developing me as a hockey player and as a person,” Bradley said. “So seeing their names up there kind of just was a constant reminder to be grateful and never take any second on that ice for granted.”

Indeed, Scott did echo that the rafters provide a unique honor.

“I think as years go by, you realize how difficult it is to win an award like that. It becomes even more special that Mark and I both were fortunate enough to win that award,” said Scott. “Being part of all that tradition is something I guess that means more the older you get.”

But the gratitude seems to extend further, becoming even a sense of duty also, tracing back to her childhood at the rink and the role models that she met there. Realizing that she was given the distinctive opportunity to meet her role models in person, she hopes to inspire young girls like herself.

“One thing that I wanted to carry with me in my career was to give the little girls that come to our games as much as the Harvard hockey players gave me,” Bradley said. “There were times when I would be the only girl on my team when I was younger, so that dream [playing Division I] becomes a little bit distant...if you’re playing boys’ hockey.”

Completing a career can be a tough transition, especially when the team has constituted a major part of your life not just over the past four years but literally for as long as you can remember. Certainly, some aspects are irreplaceable, but there is some consolation.

“Something so special about Harvard hockey is there’s a lot of tradition that comes with it—the Harvard hockey dinners are a huge event for alumni to come back,” Bradley said. “It makes graduating a little less painful and sad because you have something to look forward to.”

At these dinners, Bradley was able to reconnect with some of her role models and engage with them in a new way. Now that she has left her own legacy with Harvard hockey, however, future players very well may come up to her at the dinners to thank her for the impact she will have left on them. Harvard hockey has been a part of her life essentially from birth, and it has come full circle now that her playing days are up, but her impact on the program and connection to it are far from over.