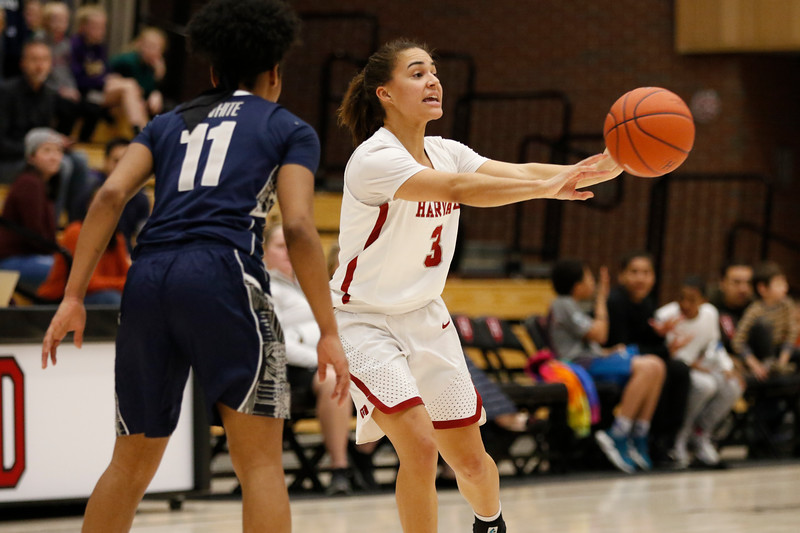 Senior guard and last years' leading scorer Katie Benzan will not return to the Crimson for her senior season. By Timothy R. O'Meara
By Lev Cohen, Crimson Staff Writer

Katie Benzan ‘20, Harvard’s point guard and leader in points and assists last season, will not return to the women’s basketball team for her senior season.

“Katie has been a remarkable player in our program for three years,” head coach Kathy Delaney-Smith said in an emailed statement. “After much discussion with the coaching staff, she has decided to step away her senior year.”

Benzan made a tremendous impact for the Crimson with her long range shooting, setting the single-season mark for three pointers made in her freshman season with 85 before subsequently breaking her own record twice, culminating with 103 triples in 2018-19. In her junior season, the Wellesley, Mass. native set Harvard’s all-time record for career three pointers made, cruising past Erin Maher ‘92’s then-record 261 and breaking the Ivy League record of 273 before finishing with 287, a total which it now appears she will not have a chance to extend further this season.

The point guard will also end her abbreviated career as Harvard’s 14th leading scorer after both she and fellow starting guard Madeline Raster ‘19 became the 20th and 21st Crimson players to reach the 1,000 point plateau last season. Her averages of 13.7 career points and 4.1 assists rank seventh and sixth respectively on Harvard’s all-time lists.

Benzan was a consistent leader on the floor from her freshman season on. She led the Crimson in minutes, points, and assists all three seasons of her college career and played in all 89 possible games, starting 87 of them.

The guard helped boost a team that had gone 14-14 in each of the two years before her arrival. While Harvard was not able to get past Ivy League titans Penn and Princeton in any of her three seasons, it posted records of 21-9, 18-11, and 17-13 after Benzan’s arrival and won two total games in the WNIT, the Crimson’s first postseason wins since the 2013-14 season.

“It will definitely be a different feel, because [Benzan], you know, is a senior and has been around for a long time,” senior forward Jeannie Boehm said, “but what we’re really focused on this year is team chemistry, and so I think bringing in a lot of — five new players — we’re going to have to work really hard at team chemistry.”

In the absence of Benzan and graduated senior guards Raster, Sydney Skinner, and Nani Redford, Delaney-Smith’s entire guard rotation will be turned over. Senior Mackenzie Barta and sophomores Tess Sussman and Maggie McCarthy are the returning Harvard guards with college experience, but the trio averaged just nine, eight, and seven minutes per game respectively last season.

With the top four guards from a season ago gone, Delaney-Smith will likely give early minutes to incoming freshmen guards Gabby Donaldson, Lola Mullaney, Sara Park, and Annie Stritzel. Given the growing pains that often accompany the jump from high school to college basketball, it is fair to wonder whether the Crimson may get off to a slow start in the upcoming season.

“I think the biggest learning curve for incoming freshmen as well as younger players is that experience portion and just being in tight situations down the stretch,” Boehm said. “But it’s definitely something I’m looking from a leadership perspective is to use my experience and my seniority to help us win.”

Until Harvard’s new guards get up to speed, the Crimson could make returning forwards Boehm and junior Jadyn Bush the focal points of the team. Boehm and Bush powered Harvard to a +8.1 rebounding margin in league play last season and finished second and fourth on the team in minutes per game. They are joined fellow forward Rachel Levy, a junior who averaged 15.9 minutes, as the only returning Crimson players who played at least 10 minutes per game last season.