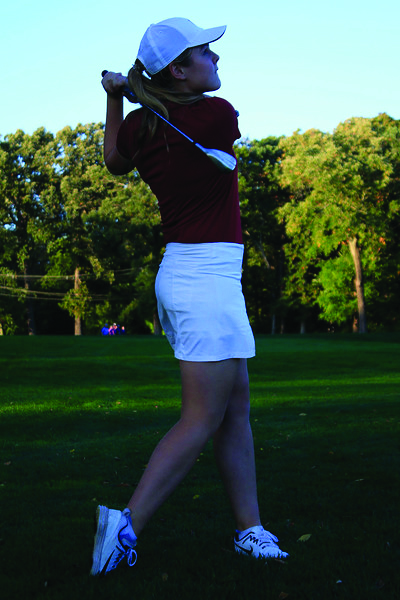 The Harvard women’s golf team looked on as the men’s team dominated the field at the Ryan T. Lee Memorial to open the season. One week later, the women teed off at the Dartmouth Invitational to start their own campaign. The result: even more Crimson dominance.

The group tallied a combined score of 576 over the two-day event to easily secure a victory. Stetson, sitting at 14 shots back, came in second, while Yale rounded out the top three.

“I think it was a super special two weekends really, for the girls and guys, for both of us to go out and win the first tournament of the season,” sophomore Chloe Royston said. “It definitely makes you feel good for the rest of the semester. We’ve all worked really hard on our games… It’s good to get the affirmation that what we’ve been doing is working.”

Sophomore Chloe Royston finishes a shot from the fairway. By Courtesy of Harvard Athletic Communications

The performance was a complete one, as Harvard was in control for much of the tournament. After the first day the group held a narrow two stroke advantage at the top of the table. However, this lead blossomed on Sunday as the team combined to shoot eight-under par, effectively running away with the win.

“We were definitely practicing a lot going into the event,” sophomore Anina Ku said. “It was nice to have a tournament two weeks in, so we had two weeks of really solid practice. We knew we were playing well going in, but we were pleasantly surprised by how well we performed.”

Given the team victory, it is no surprise that the Crimson made its mark on the individual leaderboard as well. First-year Meiyi Yan finished in 10th place in her collegiate debut. This was highlighted by a two-under par second round.

Ku, the New Jersey native, carded a total score of 142, landing her in third place. This effort included a team-best seven birdies on Sunday.

“I had a lot of birdies… That was really important because it’s a tricky course,” Ku said. “I made some mistakes, but because I had a lot of birdies I was able to even it out and even come in under par. I definitely think for all of us, myself included, all the things we worked on leading up to the season paid off.” 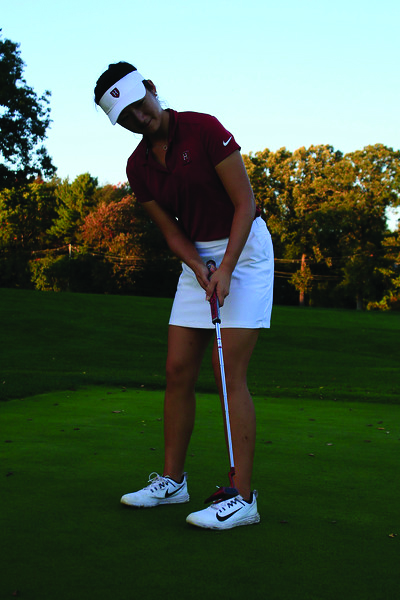 Sophomore Anina Ku was the standout from the women's golf team at last fall's Stanford Invitational. By Courtesy of Harvard Athletic Communications
Advertisement

That being said, Royston was the one to steal the spotlight with a historic performance. After the first day of play she found herself in second place, three shots back of Yale’s Ami Gianchandani. However, Sunday would belong to Royston.

She poured in six birdies to go six-under par for the day, and eight-under par for the event as a whole. This propelled her to the top of the individual leaderboard for her first tournament win. Furthermore, Royston’s final day score of 66 is tied for the best single round score in program history.

“Everything seemed to feel really good,” Royston said. “My putting was great. I made some clutch putts early on which definitely helped. The first round was pretty solid and the next round I went low. I didn’t have any bogeys [the whole tournament].”

This team victory is an ideal way to start the season, as it will surely boost morale and confidence. The group will look to continue its momentum in the remaining three fixtures this fall. Harvard will compete in the Princeton invitational before hitting up the Yale Invitational and UD Lady Blue Hen Invitational to wrap things up.

“[The victory] feels good,” Ku said. “We’re super motivated by it, and now we’re looking at every tournament for the rest of the season, and we’re going in as if we have a really good chance.”