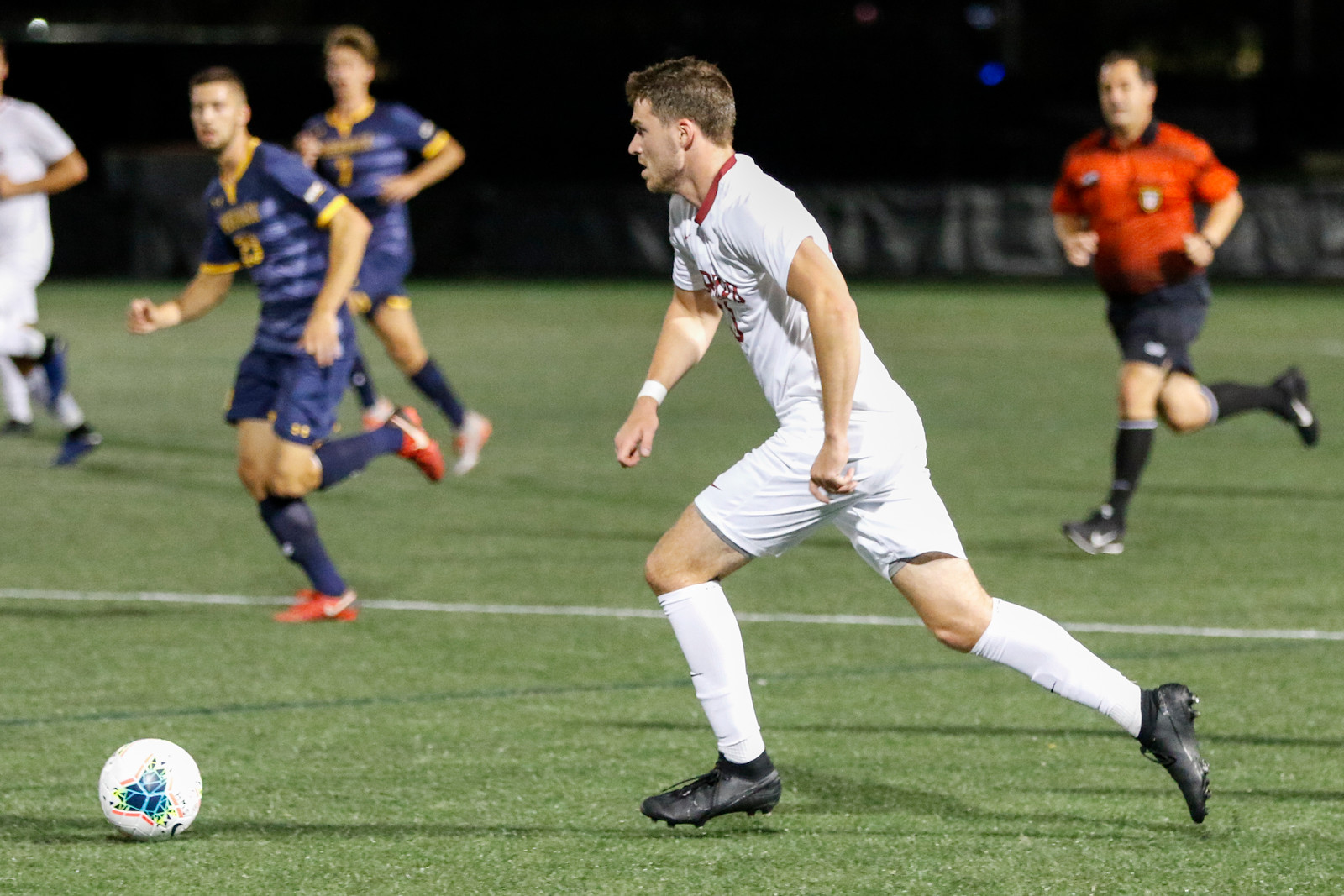 Down 3-2 with 9 seconds left in the game, all eleven Harvard players piled into the Merrimack box for one final corner kick. Given how the game had progressed up until that point, it was almost unsurprising when the Crimson’s captain, Taner Dogan, smashed the ensuing cross into the net to bring the game to overtime.

In the first ever meeting between the two programs, Harvard (0-4-1) and Merrimack (2-3-1) played out a 3-3 draw after double overtime in the Crimson’s home opener on Tuesday night.

Following a travel-intensive start to the season which pitted Harvard against some of the nation’s top teams, Tuesday’s game and the week off that preceded it, were a change of pace for the Crimson.

This extra rest may have proved vital for Harvard, as it recorded 24 shots, with 14 of those on target, both season-highs for the team. Its three goals are also more than they’ve scored all season in total.

“We had that week of training last week,” Dogan said of the break, “which let us get on the pitch and work on some stuff which was really helpful.”

It looked as if the training paid off, as the Crimson was quick to put together chances up top. Freshman forward Duncan Sutherland and sophomore forward Alfred Perez combined well from the start, coming close multiple times in the opening minutes.

Merrimack was not able to withstand Harvard’s pressure, and Sutherland was rewarded for his efforts in just the eighth minute. Sutherland pounced on a lazy pass in Merrimack’s box, slotting into an open net for his first ever collegiate goal.

Sutherland was not the only young player to come up big for the Crimson. Sophomore fullback Håvard Hjermstad was a force on both ends of the field, while freshman goalkeeper Oskar Nilsson kept Harvard in the game at times, most notably in a 1-on-1 with 20 seconds to play in double overtime. Freshman central midfield pairing Martin Vician and William Ebbinge controlled the tempo of the game for the Crimson from the midfield, showing their experience and poise with every touch.

This poise was put on full display when Harvard won a free-kick deep in Merrimack’s half in the 22nd minute. Ebbinge had the awareness to take the kick quickly, splitting two defenders to find Perez lurking in the box. Perez smoothly settled the ball on the goal-side of his marker with his first touch, firing home from close range with his second.

While the Crimson looked in control of the game following its second goal, Merrimack’s Aasmund Joedahl had other plans. In the 32nd minute, the forward was given a yard of space as he controlled a cross at the edge of the box. He fired into the top left corner to put the Warriors on the board, before spectacularly firing into the same corner from 10 yards further out just over 10 minutes later to tie the game at 2-2. The second strike came just seconds before the half, undoubtedly changing what both coaches had to say to their players during the break.

The Crimson struggled to match its first half intensity in a back-and-forth second half. Merrimack grabbed its third of the night with just minutes to play in the game, the strike from close range seeming to complete a near-impossible comeback for the Warriors in the 84th minute.

In a game with as many twists and turns as it had, it always seemed as if there was one more goal waiting to be scored. Dogan’s header with eight seconds remaining turned out to be just that, and was enough to extend the game by twenty minutes. Although neither team was able to capitalize in overtime, spectators could not complain of a lack of action.

“It’s always good to score three goals in a game,” Dogan said. “We have another extended break before we play Yale to open Ivy’s, so we’ll have a chance to get back on the training ground and get to work.”

Harvard will have another long break before its next time out. The Crimson will head to New Haven to kick off Ivy League play against Yale next Friday, October 4th. The Crimson is unbeaten against the Bulldogs since 2013, and will be looking to extend its streak to six years this time around.