Early scoring put the Crimson atop the Saints, but also gave the Golden Knights their own victory 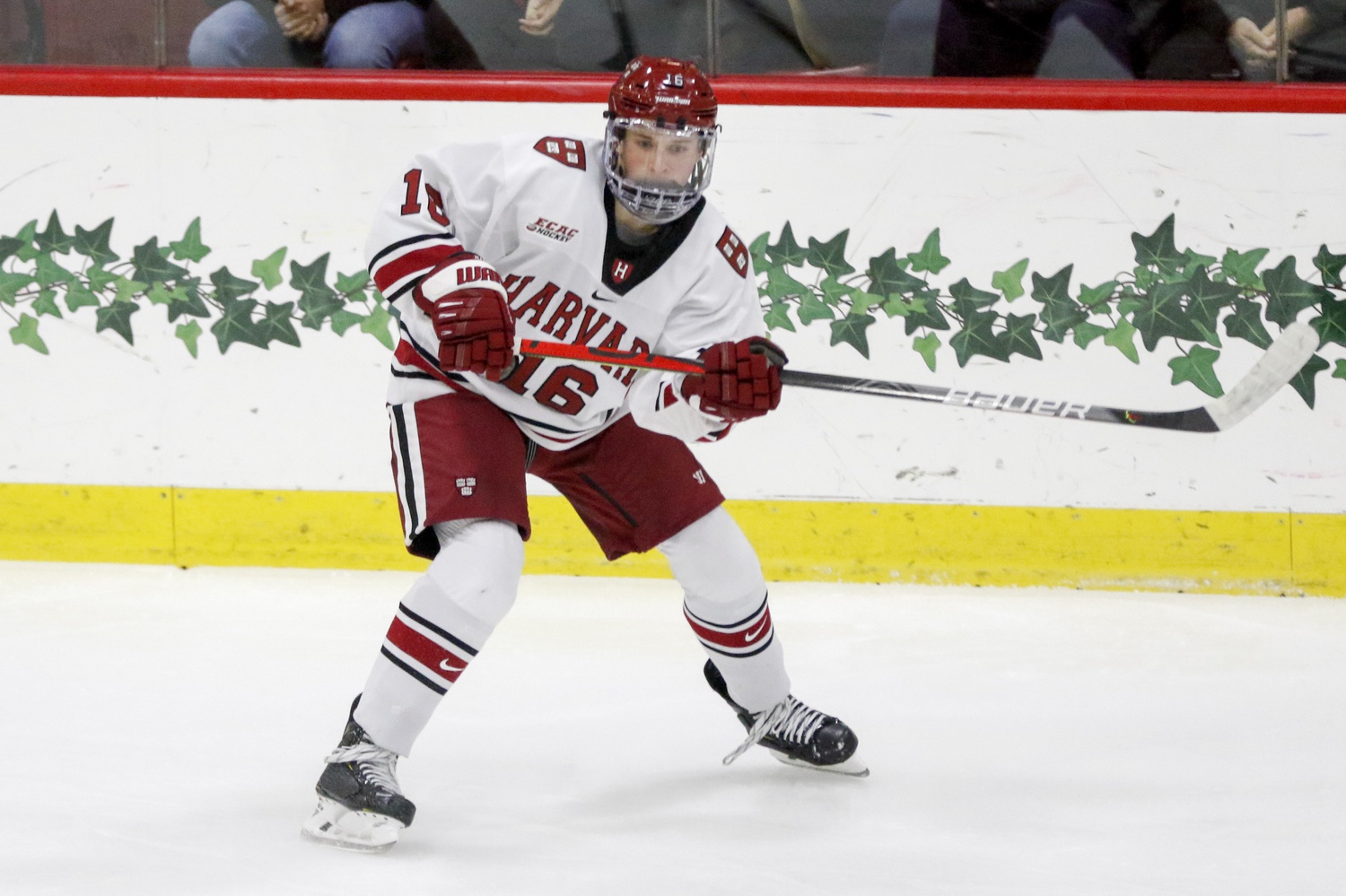 After a strong showing against rivals Yale at Madison Square Garden, the No. 16 Harvard men’s hockey team returned to Bright-Landry for its first slate of home games in the new year. Its challengers, St. Lawrence and No. 7 Clarkson, had not faced the Crimson so far in the season. With the Saints posing relatively easy competition and the Golden Knights a tougher task, Harvard looked to recapture its winning ways and earn another four-point weekend, which it hadn’t been able to accomplish since late November.

“We just got to execute on some things better, and we just need to play more intelligent,” head coach Ted Donato ’91 said. “I liked our compete level, I liked our work ethic. I thought we did a lot of good things, but when you take that many penalties you put yourself [behind].”

Freshman Mitchell Gibson started both games for Harvard this weekend; he has been between the pipes for eight out of the team’s past nine contests. Though the backstop turned in one of his best performances versus the Saints, a team-wide sloppy first period against the Golden Knights marred his numbers.

Not coincidentally, the team had trouble staying out of the penalty box this weekend — an unusual problem for a speed-and-skill group that prefers to play with the man advantage. Despite the weekend’s negative conclusion, the Crimson’s star players have continued to make their marks on the scoresheet. Rookie Nick Abruzzese (8–13—21) leads all first-years in points per game (1.24), and is second in team scoring.

He and his linemates, sophomores Jack Drury (1.36) and Casey Dornbach (1.35), are the ECAC’s top three skaters in terms of points per game. Sophomore Jack Rathbone and junior Reilly Walsh, for their part, are tied for the scoring lead among conference defensemen.

“I think as a team, we have to be able to handle adversity better and not let it snowball into going 3-1 and 4-1,” coach Donato said. “If we can keep the game a little bit closer when they’re riding momentum and adrenaline, it gives us a much better chance to get the result we want at the end.”

On Saturday night, Harvard played host to its first top-ten ranked opponent since December’s matchup against then-No. 2 Cornell. Unfortunately for the Crimson, this contest also ended in disappointment.

The game began with a promising break for Harvard: just two seconds into the first period, Clarkson was penalised and the Crimson was given a powerplay opportunity. Special teams were expected to be the highlight of a clash between these two teams. The Golden Knights came into Saturday with a whopping 92.4 percent penalty-killing efficiency, good for second in the country, while Harvard owned the nation-best powerplay conversion rate at 30.4 percent.

Clarkson managed to shut down the hosts’ initial chance, though — a sign of things to come. However, the hosts broke the ice for the second time that weekend. Just over four minutes into the game, a series of turnovers put the puck within Dornbach’s reach. The winger, who was all alone on the left side, turned on the jets and beat graduate student net-minder Frank Marotte glove-side.

Not too long after, however, the Golden Knights responded on a 5-on-3, with junior defenseman Connor McCarthy firing a shot past Gibson. The floodgates opened; in the nine or so minutes that followed, Clarkson scored three more goals, one being a powerplay tally.

“We dug ourselves a hole in the first period,” coach Donato said. “We weren’t able to stop the bleeding. We get the quick goal to start the game, and we put ourselves down 5-on-3. We did [that] a couple times tonight, and that’s a recipe for disaster.”

All of a sudden, the visitors were up, 4-1, and the Crimson was left reeling. Harvard had built a solid first-period record so far this season, scoring 22 goals and conceding only 7 in opening frames until Saturday. The lone bright spot was a powerplay conversion late in the first, as Abruzzese went up the right side and top-corner on Marotte. 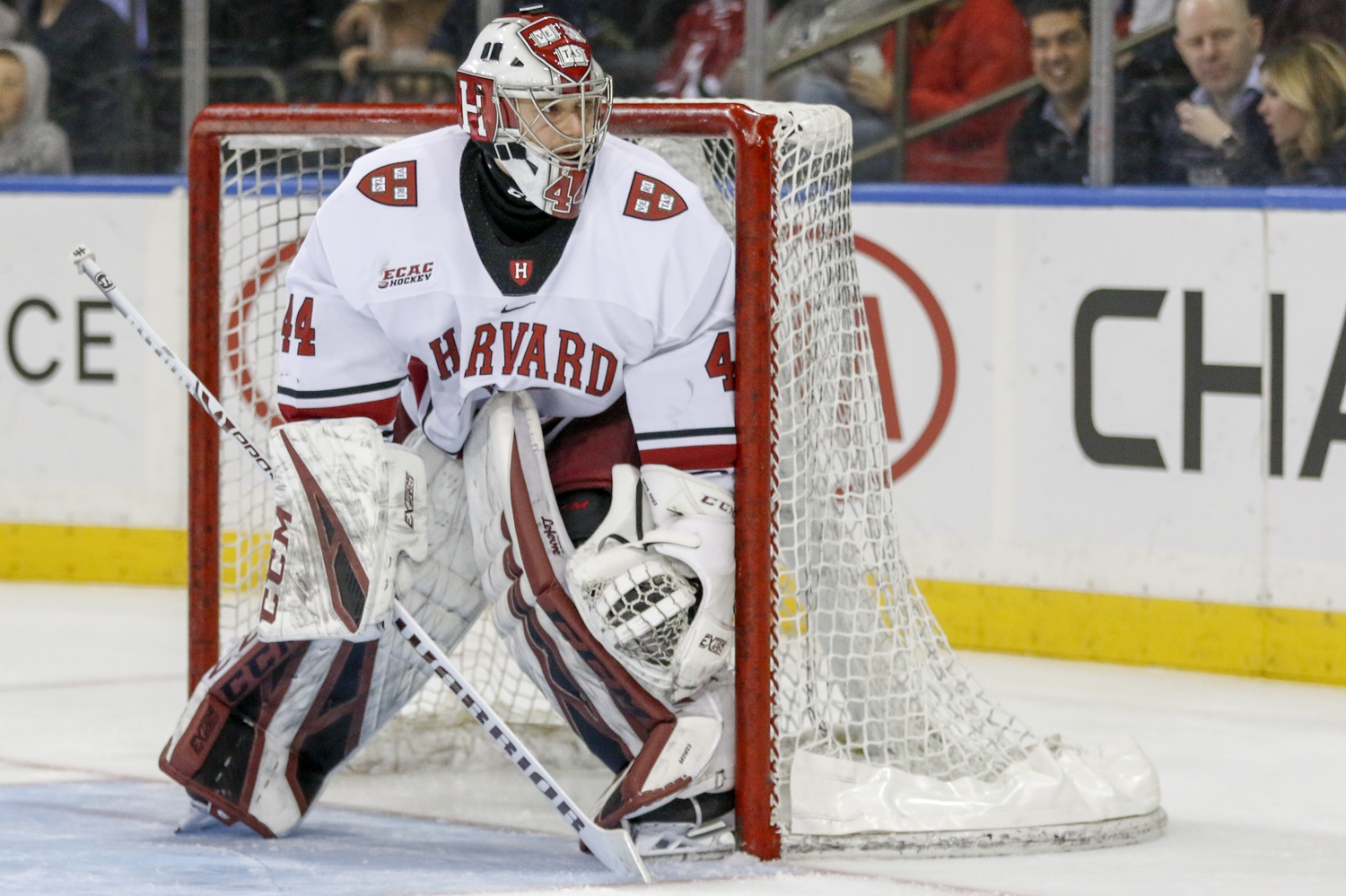 The Crimson entered the second period with a two-goal hole to climb out of. That middle frame offered plenty of chances, as the teams traded penalties throughout. But with all the whistles and the back-and-forth play, neither group entirely took control of the game.

“After it was 4-1, I liked the fact that we dug in and started to play the way we’re capable of,” coach Donato said. “I think the penalties that we took, took us out of the opportunity to hold onto momentum for longer.”

Harvard cleaned up its team defense in that middle period, and Gibson settled into his crease. When the third period began and the hosts found themselves on the man-advantage once more, it seemed as though the dam would have to break.

And it did, as Drury passed to Abruzzese in the slot and the first-year had the patience to wait out Marotte before roofing it past the net-minder. The Crimson had several other good looks, including three powerplay opportunities, and outshot its opponent 17-7, but was unable to capitalize and finally tie the game. The Golden Knights added an empty-netter to close out the contest.

On Friday night, the Crimson’s first home contest in over a month, the hosts came ready to recreate the offensive prowess that had catapulted them past Yale the previous week. St. Lawrence sat at the very bottom of the ECAC points table, and had been outscored 42-79 in the season so far.

“We knew that they were going to work hard,” Walsh said. “Every ECAC team, you know what you’re going to get. We tried our best not to look at their record in previous games.”

Harvard managed to kill its first penalty, and was rewarded with a powerplay chance of its own midway through the first period. It took less than a minute for the Crimson to find the back of the net. As the top man-advantage unit on the ice cycled the puck, Rathbone found himself in the high slot with a narrow shooting lane.

Rather than trying to shoot through St. Lawrence penalty-killers, though, Rathbone sent a shot-pass intentionally wide to where Drury was waiting at the side of the net. The forward tapped in the puck to beat senior net-minder Daniel Mannella.

With possession of the lead, Harvard killed another penalty and again the Saints were whistled, this time for holding. Freshman forward John Farinacci wove his way into the zone around opposing defenders and tried to go far-side on Mannella. Senior forward Colton Kerfoot redirected his linemate’s attempt into the back of the cage for the 2-0 lead.

By contrast only one goal was scored in the middle frame, a powerplay slapper from Walsh at the top of the left circle. The tally broke a five-game goal drought for the defenseman.

“The second period, I thought they pushed us,” Walsh said. “I thought we weathered it fine. But especially [against teams like Clarkson], that’s not going to work for us. For us, we’ve got to take those lessons from tonight and make sure we’re learning those.”

The teams traded penalties in the third period as Gibson pursued a second-straight shutout. A little over halfway through the period, though, the Saints managed to break his bid on a 5-on-4.

Junior defensemen Bo Hanson and Jake Stevens played catch with the puck at the blue line, with Stevens finally holding. His wrist shot through the screen fooled Gibson, and gave the visitors their first tally of the night. Despite that success, St. Lawrence was unable to mount a comeback in the remaining several minutes.

“We kind of expected we would have to grind a game out, tied, but our powerplay came through,” coach Donato said. “We had excellent goaltending. In a game we really needed to win, we did enough to get the two points.”