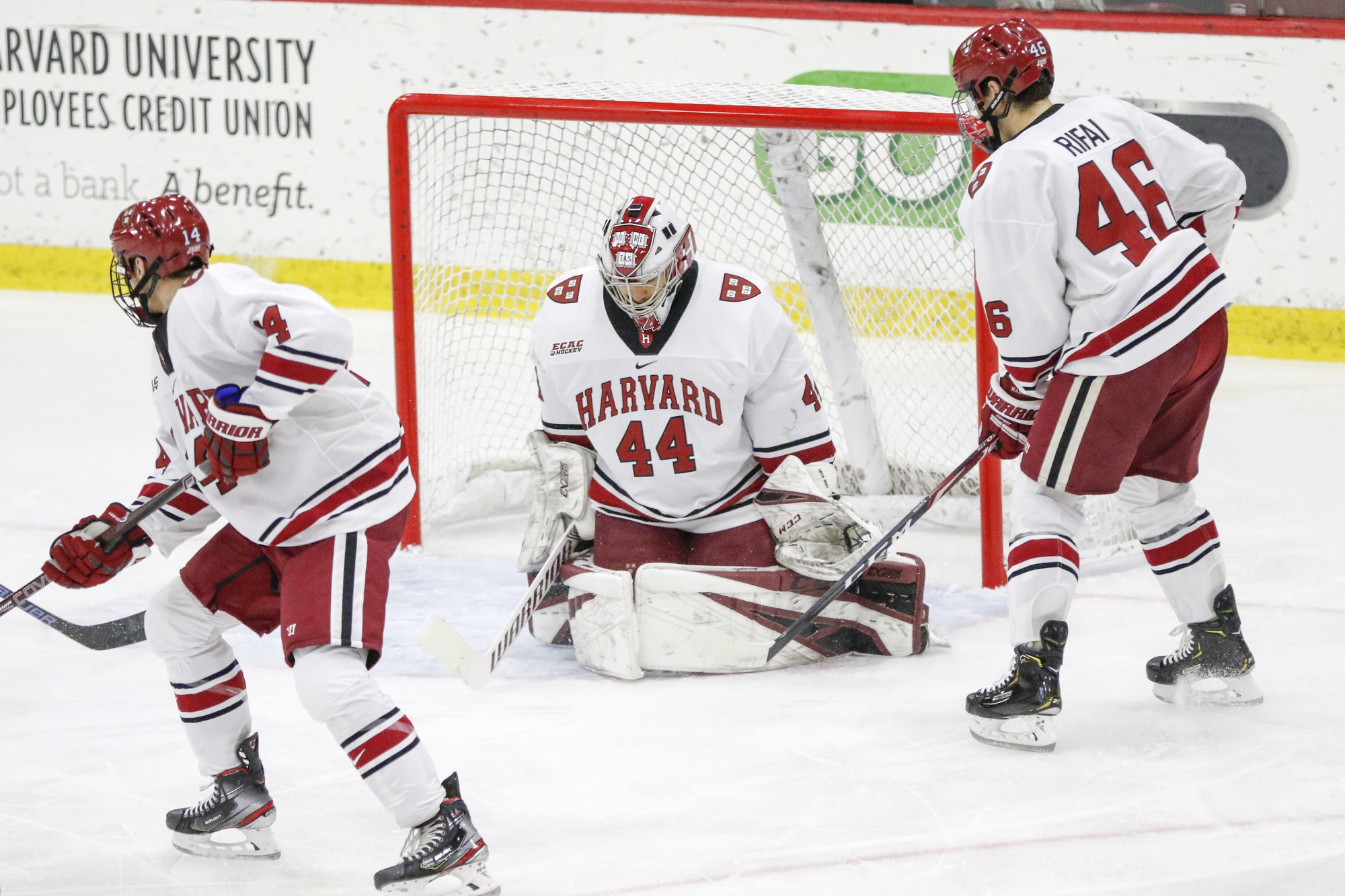 Returning to the ice just days before the new year, the No. 17 Harvard men’s hockey team jetted to Southern California for a double-header against No. 16/14 Arizona State. The Crimson had had a three-week winter break to put its four-game losing skid behind it; for their part, the Sun Devils were looking to steady an up-and-down year before the second half of the hockey season began in full swing.

The contest, played at the training facility of the NHL’s Anaheim Ducks, marks the first time since the 1999 Frozen Four that a college hockey game has been played in the Golden State.

“Playing here is really special,” said Anaheim Ducks prospect and rookie defenseman Henry Thrun. “Coming back here for the first time since the summer has been a lot of fun. And seeing a lot of fans here, that was pretty cool.”

Harvard (7-4-1, 6-2 ECAC) put on its usual show of offensive talent and goaltending prowess to take the first game by a score of 4-1, but Arizona State (10-7-3) came back for a closely-fought overtime contest that ended a 4-4 tie. While college hockey officially counts this a draw, the teams played an NHL-style extra frame of 3-on-3 overtime, in which Crimson sophomore forward Casey Dornbach punched home the winner.

“I thought it was an exciting game,” said head coach Ted Donato of the overtime contest. “Coaches don’t always appreciate that... I think our team took a step forward, from where we were before the break. That’s a good sign.”

In what has become a normal disruption for Harvard this time of year, the team was missing one player to Team USA at World Juniors — in this case, sophomore forward Jack Drury. In his absence, freshman forward John Farinacci was called upon to center the Crimson’s productive top line, alongside Dornbach and fellow rookie Nick Abruzzese.

But the squad also had a happier lineup change, as first-year forward Austin Wong was finally able to make his debut after weeks of injury recovery. Wong slotted in at right wing, playing alongside sophomore Baker Shore and senior Colton Kerfoot.

“I thought he was excellent,” coach Donato said of Wong. “His compete level was great; it was nice to see him light up after he scored [on Saturday]. Our whole bench was really excited for him.”

At the start of the second period in Sunday’s game, it seemed as though the Crimson would be taking home two wins. The squad held the lead after two first-period goals. Starting off the scoring, freshman defenseman Ryan Siedem stuffed in a rebound off a shot from senior forward Frédéric Grégoire, beating Sun Devils rookie net-minder Max Prawdzik. Soon after, Abruzzese’s pass from behind the goal line found Dornbach in the slot, and the sophomore shot the puck past Prawdzik’s blocker.

“I thought that whole [first] line looked like they were creating chances and creating opportunities,” coach Donato said. “[The Sun Devils have] got some big guys on the blue line, but I thought they battled and kept their feet moving, and did a lot of good things.”

Early on in the middle frame, ASU sophomore defenseman Joshua Maniscalco was whistled for hooking, giving Harvard its first powerplay of the night. It took the Crimson less than 30 seconds to find the back of the net. Puck movement in the offensive zone saw the biscuit find sophomore defenseman Jack Rathbone at the point. Prawdzik, effectively screened, could not make the stop. Sophomore Evan DeBrouwer replaced the first-year in net thereafter. 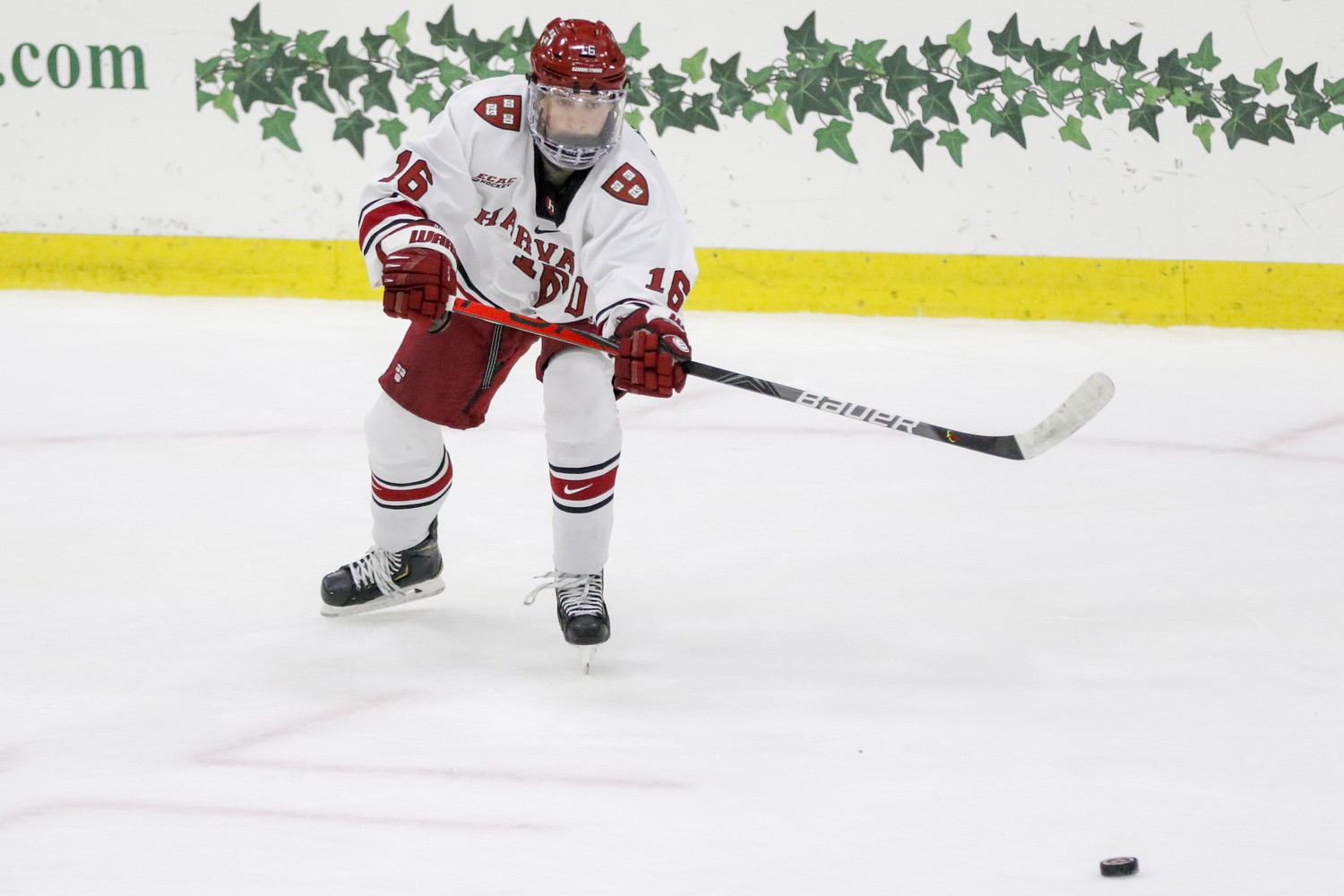 Abruzzese leads all rookies in points per game played (1.25). By Timothy R. O'Meara

The 3-0 deficit spurred a quick response from the Sun Devils, though. Not long after Rathbone’s tally, Maniscalco’s own shot from the point resulted in ASU’s first goal of the night. A minute later, sophomore forward Austin Lemieux buried a rebound in front of the net, bringing the score to 3-2. For the first time all weekend, the Sun Devils stood within a goal of Harvard.

Before ASU mounted its full-fledged comeback, the Crimson extended its lead. A cross-ice flip pass from Dornbach in his own zone found a streaking Abruzzese, who cut between the Sun Devils defensemen and went five-hole on DeBrouwer. The tally is the first-year’s fourth goal in four straight contests, extending his point streak to five games (4–2—6).

The final period, however, was all ASU. Harvard’s 4-2 advantage was erased by tallies from junior forward William Knierem and sophomore forward PJ Marrocco. The first 5-on-5 OT frame was goalless, so the game officially ended as a 4-4 tie. In an additional 3-on-3 period, however, the Crimson earned a powerplay in the closing minutes. Junior defenseman Reilly Walsh shot the puck from the top of the right circle, and Dornbach redirected it past DeBrouwer to earn the “win.”

“We talked about [having an extra 3-on-3 period],” coach Donato said. “By NCAA rules, the first five minutes is really all that matters, and then we played the 3-on-3. I think you’d have a hard time convincing me that that’s not exciting.”

Offensive contributions continue from the likes of Abruzzese and Dornbach, who is fifth in the NCAA in points per game (1.42). Though Harvard’s goal-scoring has cooled since the start of the year, the team still averages above four goals per game, good for second in the country. Rookie goaltender Mitchell Gibson’s performance on Sunday was among his worst of the season, though his overall numbers continue to impress (.931 SV%, 2.38 GAA).

The Crimson’s scoring came in a burst on Saturday as well; this time, however, the Sun Devils were unable to respond — in large part because of Gibson, who would end up turning aside 43 of 44 shots on the night (.977 SV%). The first period was scoreless, despite a Harvard powerplay opportunity midway through the frame.

“I know the shots were 12-8 [in the first] but I thought we had, like, six grade-A opportunities,” coach Donato said. “I felt like we were just looking for the perfect pass, and passed the puck out of prime shooting areas four or five times.”

Early on in the second, the Crimson was swarming around the ASU net. From behind the cage, Kerfoot dished the puck to Siedem at the boards, who passed to Wong in the slot. Wong’s one-timer zipped past DeBrouwer — the rookie’s first career goal came in his first college game.

Harvard found its next tally less than a minute later. Captain and forward Nathan Krusko collected the puck after a net-mouth scramble, looking to hand off to junior forward Henry Bowlby in the low slot; though a sprawled-out DeBrouwer stopped that attempt, he could not prevent junior Jack Badini from tucking in the rebound.

“Personally, I felt pretty good,” Badini said. “My legs felt good, felt like in midseason form. So that was important for us...getting back in the swing of things… Once the second period came around we were clicking on all cylinders.”

The Sun Devils had opportunities of their own in the second period. The most promising of these came on the powerplay, as Gibson fought off a redirected shot and the ensuing stuff attempt.

The Crimson killed off that penalty and retaliated with a goal, as Dornbach picked off a pass in the offensive zone and fired a shot that DeBrouwer struggled to hold onto; the rebound trickled into the slot, where Dornbach took a second chop at it. The puck carrommed over the net-minder and into the net, giving Harvard a 3-0 lead.

Gibson’s shutout bid was broken early into the third period, however. ASU began the final frame on the powerplay after the Crimson was whistled for too many men at the end of the second, and a point shot from Maniscalco put his team on the board.

“In the third period they turned it up,” said coach Donato. “They’re a good hockey team, well-coached, so we knew there was going to be a push. For us, we’re young in a lot of areas and we’re still learning how to close out a game and how to make things easier on ourselves. Tonight we didn’t do a great job, taking some penalties.”

The last tally of the game was Harvard’s, though, coming at the six-minute mark. Farinacci battled three Sun Devils players at the boards, stealing the puck and passing to Abruzzese at the goal line. Left all alone, Abruzzese skated in on Prawdzik, who had replaced DeBrouwer between the pipes, and outwaited the goaltender before tucking the puck home, far-side.

More than half the period remained. Though ASU had multiple powerplay opportunities, the Crimson effectively shut down its opponent — Maniscalco’s goal would be the only time the Sun Devils capitalised on the man advantage all weekend.

“[Gibson’s] been the brick wall for us since the start of the year,” rookie defenseman Henry Thrun said. “He’s just gained confidence as he’s gone. So it’s huge as a defenseman, knowing he’s back there behind us.”