No. 16 Men's Hockey Skates to Draw at Colgate 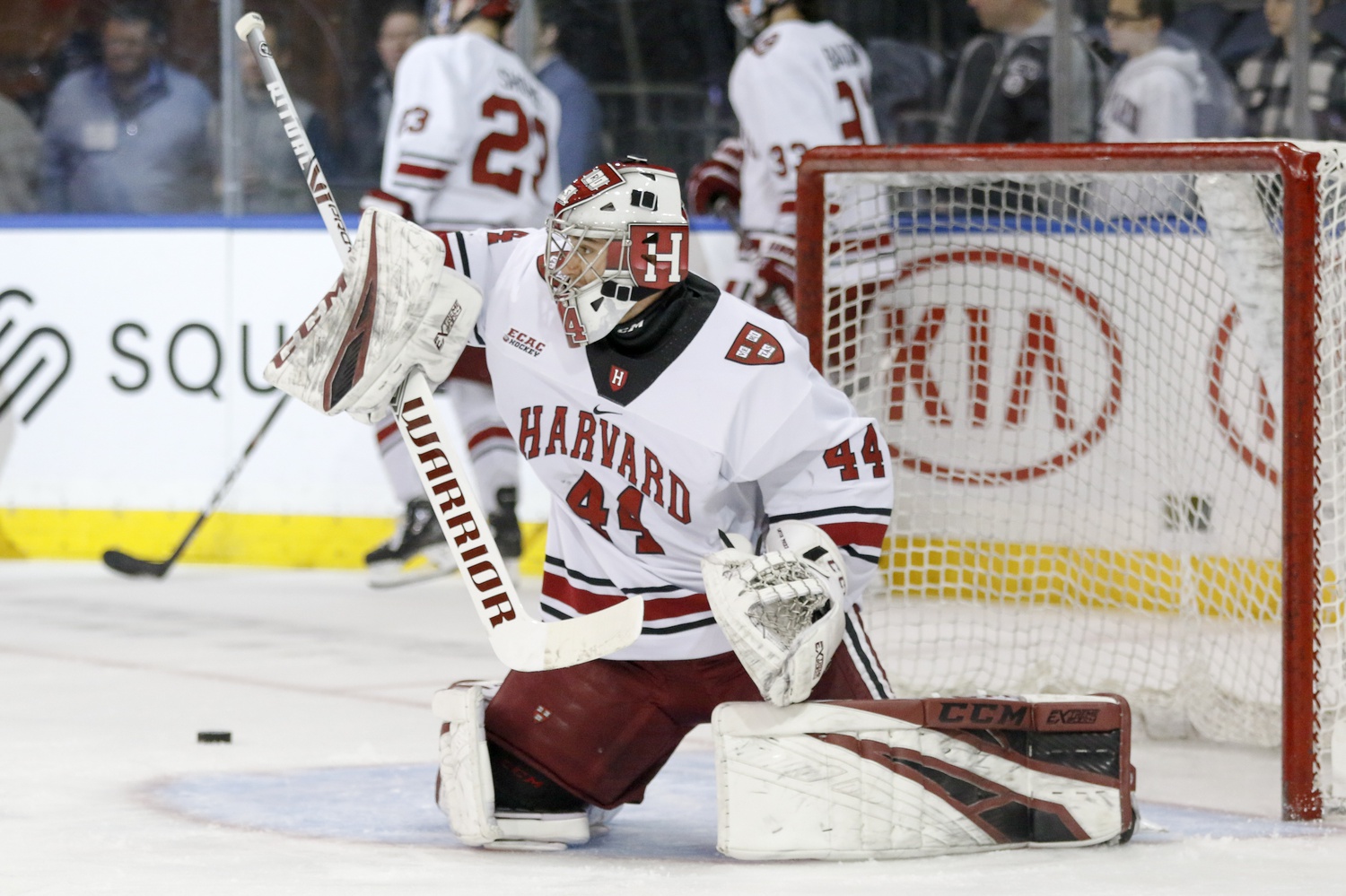 Gibson's .929 save percentage was far from a poor showing, though his 2.77 GAA was a little less of a highlight. By Timothy R. O'Meara
By Stuti R. Telidevara, Crimson Staff Writer

On the road again, the No. 16 Harvard men’s hockey team headed to upstate New York for a weekend of games against Colgate and No. 1 Cornell. The Crimson faced off against the Raiders on Friday — a contest that seemed to be relatively winnable.

But Colgate gave Harvard trouble back in December, when the teams met in Cambridge. Friday’s meeting proved that the Crimson cannot afford to overlook its non-marquee opponents, especially with ECAC standings getting tighter in the regular season’s final stretch.

“I think it was a hard-fought game,” head coach Ted Donato ’91 said. “It seemed like we were chasing the game a lot, and our powerplay was very effective and kept us coming back.

Harvard (9-6-3, 7-4-2 ECAC) skated to a 3-3 draw versus the Raiders (8-10-5, 6-3-2) after neither squad was able to score in five minutes of overtime. The Crimson’s NCAA-best powerplay, operating at an efficiency of 29.4 percent, was the visitors’ driving force, going 2-for-3 on the evening. Sophomore forward Jack Drury netted both man-advantage goals for his team, extending his point streak to five games.

Harvard has one of the lowest first-period goals against tallies of the ECAC. But this game quickly bucked that trend. Just three minutes into the first frame, Colgate scored the first goal of the contest, as senior defenseman Jacob Panetta’s point shot through traffic beat Crimson rookie net-minder Mitchell Gibson.

“We just gave up goals a little bit too easily,” coach Donato said. “It’s tough to play, when you give a good team life, especially at home; it’s difficult to chase the game like that.”

With the one-goal lead in hand, the Raiders by and large controlled play in the first period. Harvard was often hemmed into its own defensive zone; a hooking penalty allowed the hosts even more chances at the net.

A chance arrived late in the first, as freshman forward Matt Verboon was whistled for interference. Halfway through the 5-on-4, junior defenseman Reilly Walsh collected the puck at the left point and passed across the ice to rookie forward Nick Abruzzese.

Abruzzese in turn found classmate John Farinacci at the side of the net; from there, the tic-tac-toe passing play went to Drury in the slot, where the sophomore’s quick shot slipped past second-year goaltender Andrew Farrier.

“We’re just moving the puck around,” said Walsh of the powerplay’s success. “We’ve got a lot of skilled guys and...we’re good at reading the [penalty-killers] and what they give us… We’ve got a lot of very high-intelligence players on our unit that can find holes in the defense.” 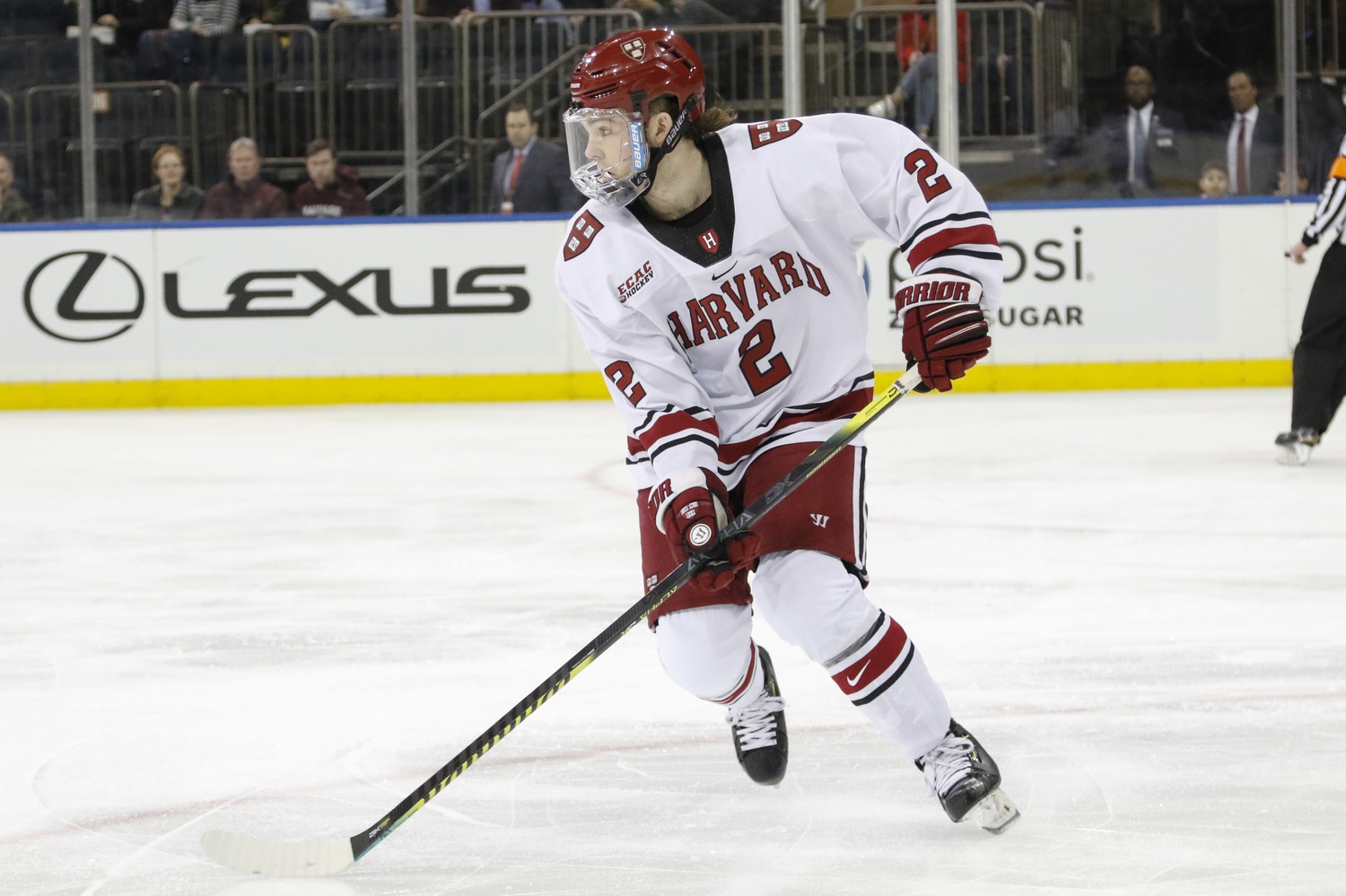 The Crimson's powerplay is converting at a rate of 29.4 percent, good for best in the country. By Timothy R. O'Meara

The teams left the ice tied, 1-1, at the first intermission. The first half of the second period was full of pace and chances on both ends — but once again, Colgate found twine first in a play off the rush that knocked Gibson over. While the referees reviewed the goal for possible goaltender interference, the call on the ice — a good goal — stood, putting the hosts up, 2-1. It took another powerplay for Harvard to even things up.

This time, however, the tie did not last long. Only 16 seconds after Drury’s equalizer, senior defenseman Ross Craig wristed the puck towards the net from the near boards. His classmate, forward Josh Snodgrass, was parked in the blue paint; Snodgrass picked off the puck and tucked it around Gibson. There were just 16 seconds left until the end of the period, and Colgate had retaken a 3-2 lead.

“I think the goal at the end of the second was a little bit of a back-breaker,” coach Donato said. “We had worked hard to get the score tied at two, and I think after killing some penalties, and not really executing, we felt, hey, you know, if we get out of here 2-2 we can have a big third [period] and be in a good spot, but we gave up a quick goal there, and that hurt.”

The contest’s pace settled somewhat in the final frame. The Raiders continued to put shots on net, but they no longer troubled the Crimson as much with their aggressive forecheck. For its part, Harvard had made some defensive adjustments and put more pressure on its foe.

The Crimson’s breakthrough arrived halfway through the third. With the top line buzzing around the right circle, Abruzzese passed the puck back to sophomore defenseman Marshall Rifai at the blue line. Farrier kicked out Rifai’s slapshot to his left — where rookie blue-liner Ryan Siedem quickly picked up the rebound, firing it into a nearly empty net for the tying goal.

“I thought we played arguably our best period in the third,” coach Donato said.

Not long after, Harvard had another golden chance, with Rifai and sophomore forward Casey Dornbach on the rush. Rifai cut to the middle and collided with Farrier; Dornbach pushed the loose puck into the net. Though the Crimson bench celebrated, the call on the ice was no goal, and a review confirmed that a goaltender interference penalty would be assessed to Rifai.

After that attempt, the puck did not cross the line — on either end of the ice. The extra frame was the only period for which Harvard outshot Colgate, but it could not capitalize on its chances. Gibson had his moments in the late stages of the game, on one occasion going post to post to make a glove save so dramatic that the goal light accidentally came on.

The net-minder’s .929 save percentage on the night isn’t too shabby, though the 2.77 goals-against average is less of a positive. Numbers aside, Gibson, who normally looks at ease between the pipes even in tense games, did not display the kind of rebound control and poise that the squad is used to seeing from him.

“He appeared to fight the puck, [to] me,” coach Donato said. “His rebound control wasn’t as sharp. I think when he’s on, shots stick to him, and I’m not sure that was the case tonight. Having said that I thought he made two incredible saves and stole what looked to be two sure goals… I give him credit for really digging in and battling.”

Despite the Crimson’s powerplay prowess on Friday, the offense was also slowed down by the Raiders’ pressure. With a difficult slate of games coming up — the first being Cornell, of course, but the Beanpot not far behind either — Harvard will have to clean up those aspects of its play in order to lock in a comfortable position ahead of playoffs.

“Just overall awareness, I think, [could be improved],” Walsh said. “A couple of the goals against tonight, we had guys that were in the right spots but missed out on their guys going to the net… Overall I think we need to just be a little bit more gritty, and want it a little bit more defensively.”