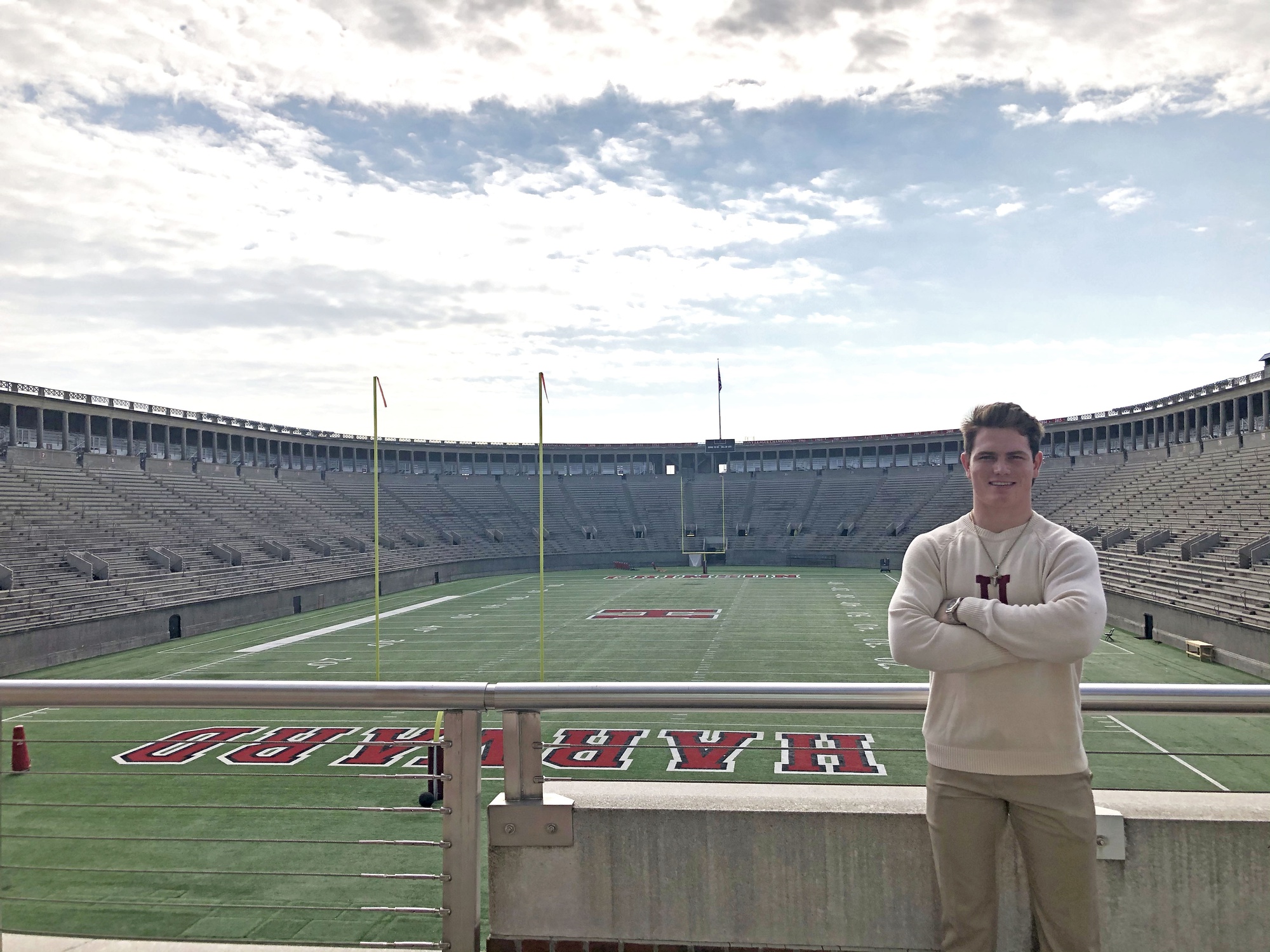 First-year Brock Locnikar poses in Harvard Stadium, but he hopes to take the field as a player soon. Until then, he will be taking on a different kind of contact sport: mixed martial arts. By Mairead B. Baker
By Mairead B. Baker, Contributing Writer

In July, the Ivy League became the first Division I conference to announce that there would be no fall sports in 2020. The news that there would be no annual Harvard-Yale football game, a memorable tradition of a typical fall semester, particularly struck the hearts of many incoming first-years. However, for the 31 first-years on Harvard’s football team, that meant no football at all.

Like many student-athletes across the country, Ivy League athletes considered taking leaves of absences, red-shirting, or perhaps just bracing the storm. For one first-year on Harvard’s football team, the bearing of no football presented a unique opportunity to pursue a passion of his that the typical fall football season would prevent.

Scottsdale, Ariz., native Brock Locnikar, who received All-American recognition in both football and wrestling, will focus his attention on mixed martial arts upon his leave of absence from the College in the spring.

“I’ve started training in fighting again, and I am ready to compete again,” Locnikar said. “I am planning on having five fights in this next semester.”

Locnikar has had over fifty fights in MMA, including Brazilian jiu-jitsu and Muay Thai. He has traveled around the country with a fight team from Arizona that participates in amateur fights. This upcoming spring, he is set to train with Arizona’s Power MMA and Fight Ready, two gyms that have produced champions such as Ryan Bader and Henry Cejudo. While Locnikar is missing out on what would have been his first collegiate season, he views this Spring as yet another opportunity to build himself as a better athlete.

“Brazilian jiu-jitsu, Muay Thai, boxing, wrestling — it's just the most grueling and adrenaline-filled experience,” Locnikar said. “With the void of competition this year, it is a really great position to be in for me to pursue this.”

The two-time Arizona Linebacker of the Year believes that his training in MMA has shaped him to be the athlete he is today.

“[MMA] definitely shaped the person I am today and has had the biggest impact on all my sports because the mindset is so applicable. It really made me mentally tough and physically strong.”

Despite having the option to pursue collegiate wrestling, Locnikar, who received 18 D1 football offers, ultimately chose football. He believes that competing and training in MMA and wrestling from a young age has helped him in his performance as a football player.

“I developed a late love for football, and I feel like all of my past experiences with fighting have helped so much with the linebacker position,” Locnikar said. “[MMA] translated really well. I was able to capitalize on my skills, and I got stronger and faster as I got older.”

The Arizona Defensive Player of the Year found football on a whim, ultimately developing an affinity for the linebacker position.

“One of my friend’s dads had a team, and he recommended I try it with my background, and I fell in love with the linebacker position and the whole mentality of it,” Locnikar said. “From that point, I played football throughout high school, and have had over 350 career tackles.”

While the future of college football is yet to be determined, Locnikar, like many other athletes, looks forward to the time he gets to compete in Harvard Stadium. For now, he is focused on doing what he can to prepare for that next step.

“After I finish my collegiate career, I am definitely interested in pursuing a professional sport, whether that be MMA or football. I am kind of keeping both doors open to see which one is better for me in the future,” Locnikar said. “I just love sports and cannot imagine my life without them.”