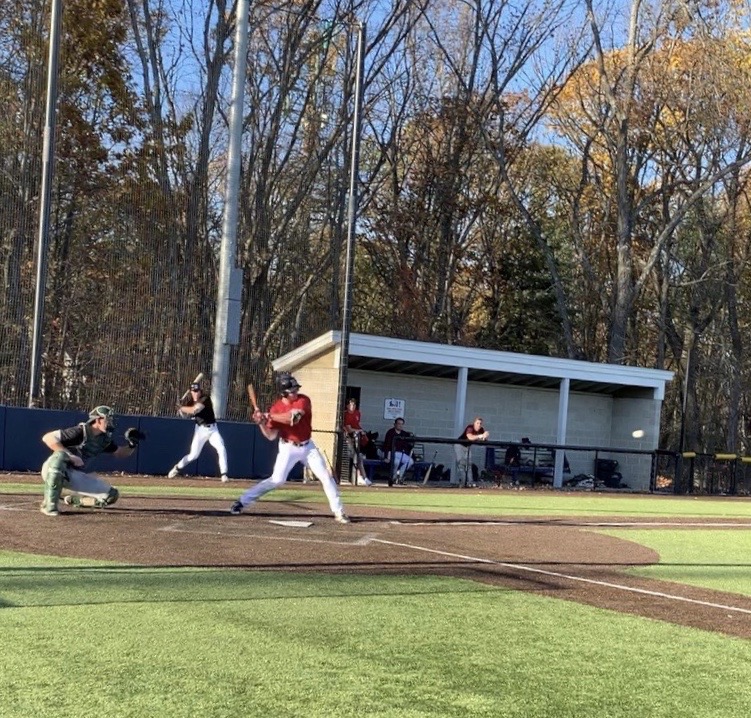 Tommy Seidl '21 hits during a weekly scrimmage at the New England Baseball Complex in Northborough, Mass. Scrimmages have been taking place at the site throughout fall 2020. By Courtesy of Buddy Mrowka
By Griffin Wong, Contributing Writer

For Jaren Zinn ‘21, it is all about maximizing the opportunities that he has. That is why the 6’4” right-handed pitcher is taking a leave of absence this semester, choosing instead to live and train in Allston, Mass., with a few of his teammates. Zinn hopes that by focusing on baseball this semester, he can make the most of his remaining two years of eligibility with Harvard Baseball.

“The plan, assuming we have a spring season, coming into the fall, was I would enroll in Spring 2021 and then Spring 2022 and I would get two more seasons at Harvard. I’d get to have an in-season semester in both of my remaining academic semesters,” he explained.

Zinn saw his junior season as the opportunity to prove himself to professional scouts and gain valuable college pitching experience. Before Harvard, Zinn was an outfielder at Georgetown Day School, so it was not until college that he began to transition full-time into a pitcher. Due to a slew of injuries, along with the fact that there were 11 seniors on the 2019 team that won the Ivy League championship, he has pitched only 4.1 innings thus far in his Harvard career. He currently throws a four-seam fastball that sits between 90 and 95 miles per hour and a sinking curveball that averages 78 miles per hour.

Zinn started off the 2020 season pitching well, with a 3.86 earned run average in 2.1 innings, including a scoreless outing on March 6 against Fairfield University. However, his streak was cut short due to the COVID-19 pandemic. He took the hiatus as an opportunity to improve his game, knowing that, due to missing his entire sophomore season with injuries, he had two more seasons to impress professional scouts.

“In a funny way, I do think coronavirus has helped me with baseball,” he said. “There’s just this year-long block where the focus has been solely on development. So I gained a couple of miles per hour in [velocity] since coming home in March, and I was able to pretty much lift throughout the shutdown because I borrowed weights from my trainer at home. So, in a way, the pandemic has provided an opportunity to work hard and get better.”

That mentality has extended into this semester. Zinn has been living with teammates, including Tommy Seidl ‘21 and Buddy Mrowka ‘21, Harvard Baseball’s captain. He has also been training with Cressey Sports Performance, a gym based in Hudson, Mass., that trains MLB stars like former Cleveland Indians ace Corey Kluber and New York Yankees slugger Giancarlo Stanton. The roommates frequently throw together at a local softball field with some other teammates in the area.

“It’s been an absolute blast getting to be around my teammates again,” Mrowka said. “We hadn’t seen each other in a few months, so being in the same house as these guys has been a lot of fun. And then on the training front, it’s been a high-energy atmosphere. We’ve also been pushing each other to be more committed, disciplined, and hardworking in ways that only your teammates can. I think it has really helped everyone in the house.”

They have also gotten the chance to participate in workouts this fall with other college players from Dartmouth and UMass. Zinn has relished the opportunity to throw to live hitters, pitching each Friday in a series of loosely-organized scrimmages. Scouts have frequently shown up to the New England Baseball Complex in Northborough, Mass., to watch the training sessions.

Even though Zinn is not enrolled this semester, he has been doing research with a Boston College professor and participating in Harvard Business School’s CORe program, which involves a series of online classes in financial accounting, economics for managers, and business analytics. Meanwhile, both Seidl and Mrowka have been taking classes. Nonetheless, all of the roommates have found ample time to focus on baseball.

“It’s been up to us to create our own schedule as opposed to having team lifts at consistent times with everyone else throughout the week, so we’ve been able to work out a little bit more and play a little bit more than we normally would have,” Seidl said. “I feel like I’m busy. We are pretty busy.”

Off the field and outside the classroom, Zinn, Seidl, and Mrowka have continued to strengthen their friendships, build deep camaraderie, and deepen trust that each of them describes as crucial aspects of Harvard Baseball.

“I don’t think there’s ever been a day where I’ve been in a locker room and not laughed,” Mrowka said.

“In the locker room before the game, with everyone joking around, that’s the stuff that’s special about college athletics. [It’s] the people,” Zinn added.

Seidl, a 6’1” outfielder from Wellesley, Mass., credits the locker room bonding as an important reason for the success of the 2019 team that went 27-16 (14-7 Ivy League) and claimed the Ivy League championship.

While the Ivy League has not yet made a decision on whether or not there will be a season in Spring 2021, the daily training and bonding will make Zinn, Seidl, and Mrowka as prepared as can be if there is one. The Ivy League has delayed the start of any spring sports to at least the end of February, and 2020-21 winter sports have been canceled, but the prospects of a spring season at some point in 2021 are still on the table. Because the 2020 season was cut short due to the COVID-19 pandemic, Harvard is still the defending Ivy League champion. Mrowka, a 5’11” infielder who contributed seven RBIs in the championship-winning 2019 season, cited the potential to retain the crown as one of the team’s primary motivations.