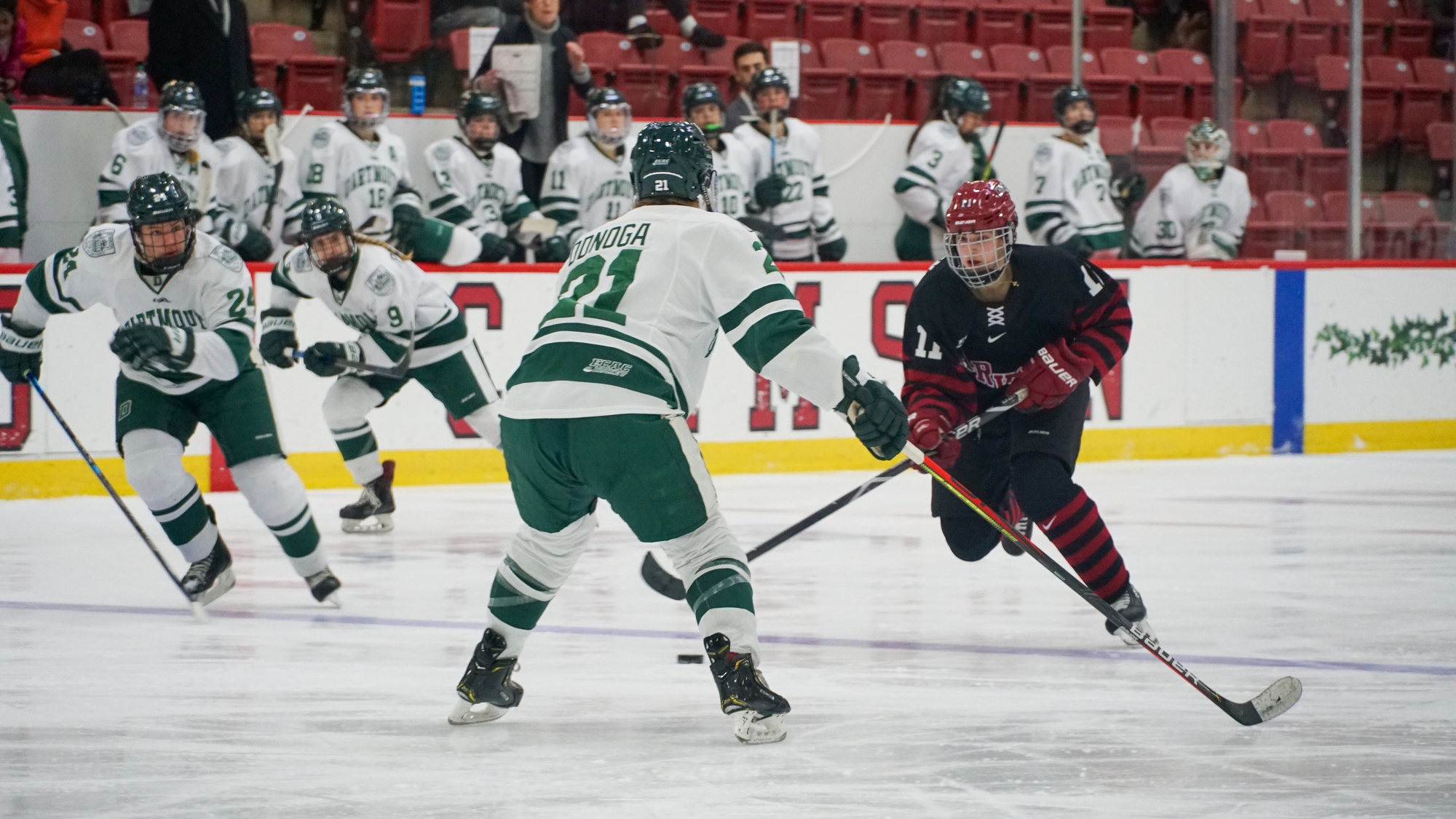 Sophomore forward Kristin Della Rovere facilitated the Crimson's offense in the win over the Big Green, leading the squad with two assists. By Zing Gee
By Isabel A. Levin, Crimson Staff Writer

The Harvard women’s ice hockey team defeated Dartmouth 4-0 this Friday, adding a critical win to its record as the No. 10 Crimson shoot for an NCAA tournament berth heading into the season’s final four weeks.

Harvard (12-8-1, 10-4-1 ECAC) took the lead over Dartmouth (5-14-3, 2-10-3 ECAC) at 6:46 in the first period when sophomore forward Kristin Della Rovere fed the puck across the middle to fellow sophomore forward Anne Bloomer, who deftly maneuvered the puck around first-year Dartmouth goaltender Hanna Humphreys. “Kristin had the puck wide,” Bloomer recalled. “It was a great pass.”

Bloomer netted the puck twice in the matchup, the second time immediately following a faceoff at 11:20 in the third. Della Rovere won the puck drop before swiftly passing to Bloomer, who slipped the puck past the Dartmouth net-minder. Bloomer explained, “We had a faceoff play that we were planning on running, and we just executed it well and shot on the ice and it went in.” The Crimson won 33 faceoffs, while the Big Green won only 26.

“[Controlling the faceoffs] is a huge part of the game,” Bloomer noted. “We talk about it a lot. We talked about it, actually, today coming into the game. Knowing your role in the faceoff is very important, and they’re a great opportunity to run something.” Bloomer also emphasized that faceoffs play a key role on defense as well as offense.

Despite the 4-0 win, Harvard only outshot Dartmouth 34-33. Crimson goaltender Becky Dutton’s 33-save shutout highlighted the match. The junior thwarted many tricky shots, including quickly pouncing on a free puck in the first period. Dutton’s skillful positioning and consistent stick checks played a critical role in the Crimson’s victory.

As the game progressed, Harvard began to consistently control the ice. After over twenty scoreless minutes, sophomore defender Maryna Macdonald lit the lamp again with a strike from the point that flew untouched into the net at 8:26 in the second period. The tally shifted the momentum in Harvard’s favor.

“One of our assets is that we’re a pretty fast team, and if we stick to our forecheck and play hard in the defensive zone, the goals and everything else will come,” explained Bloomer when describing the Crimson’s strategy. “Part of our identity is being a really hard-working team with a lot of speed, so that’s kind of our motto going into every game.”

Tenacity and agility did indeed characterize Harvard’s success. The team capitalized on natural opportunities and created additional advantages in unlikely situations. 25 seconds into junior forward Brooke Jovanovich’s two-minute minor hooking penalty, junior forward Becca Gilmore deftly skated the puck from the center line down to the goal line, sliding the puck past the goaltender for a short-handed score.

“[Crimson goaltender] Becky made a really great save and was able to kick it out to me,” Gilmore described. “I got the puck, and I just drove the net and [it] went into the back of the net.” She added that when shorthanded, “You don’t want to get yourself too extended if you can’t get back, but [fellow forward] Kat [Hughes] and I have developed a really good chemistry of knowing when to go and knowing when to just play zone. When you can put the puck in the net, it’s always an extra benefit. It gets our team pumped up.”

Harvard’s victory over Dartmouth gives the team positive momentum going into the Beanpot. “We’re back on a winning streak, eyes focused on Tuesday,” Gilmore said. “We have a great team going into it, and we’re going to be playing a great opponent. We’ll just take it one step at a time.”

The Crimson face off against Northeastern in the Beanpot’s semifinal round at 5 p.m. on Tuesday.