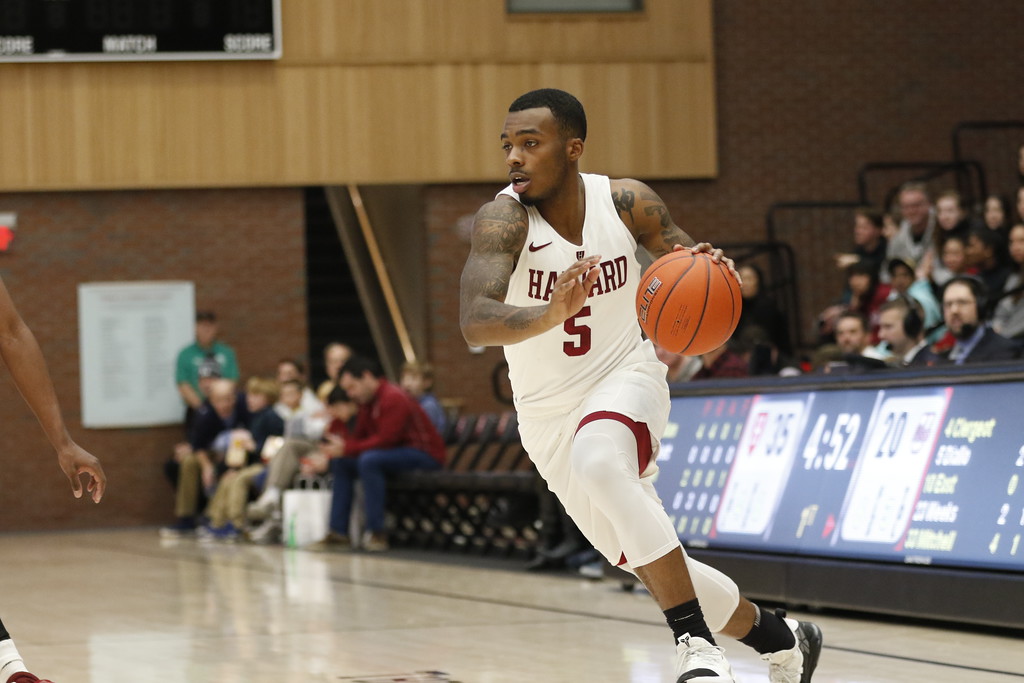 Rio Haskett played a key role in the burst of energy provided by the bench By Timothy R. O'Meara
By David Manikas

The Crimson (13-5, 2-1 Ivy) did not look like the team that just won eight in a row. Its sole lead, a one-point advantage after the first offensive possession of the game, was quickly erased by a sharp Penn (9-7, 1-2) team. Looking to capitalize on any opportunity, the Quakers intercepted careless passes on three consecutive possessions, fueling their hot shooting start—hitting 11 of their first 17 shots. A 24-5 Penn run to open the game was highlighted by freshman guard Jordan Dingle’s emphatic back-to-back dunks, leaving the Harvard crowd silent. Ten minutes hadn’t even gone by and the game felt like it was already over.

However, basketball is a game of runs, and tonight’s contest was no exception. Amaker found himself going to his bench quickly, subbing in freshman Chris Ledlum as well as juniors Danilo Djuricic and Rio Haskett. The trio added energy immediately, with Ledlum converting a tough layup and coming up with a foul as well as a steal on the other end.

Everyone in the Palestra had their eyes on the matchup down-low between senior forwards AJ Brodeur, the reigning Ivy League Player of the Year, and Harvard’s Chris Lewis, who has scored double digits in the last ten games. Lewis, battling for positioning near the rim, was denied by Brodeur and the rest of the lineup early and often. Brodeur had his own struggles on the offensive side, making only two field goals in the first half.

“[Brodeur’s] the key to their team and Lewis is the key to our team,” said coach Tommy Amaker. “Penn did a good job of pushing Lewis out and not letting him get deep post position.”

Harvard would go on to respond with its own 19-3 run, cutting the lead down to three after a couple of free throws by senior guard Christian Juzang. The stretch was made possible by Djuricic’s and sophomore Mason Forbes’ impressive defensive play against Brodeur with Lewis in foul trouble, where they kept the game from getting out of hand by limiting Penn’s leading scorer offensively and making him pick up his second foul—sending him to the bench.

“Without Mason and Danilo’s play in the first half, we don’t have a chance,” said Amaker. “I thought they saved us.”

The inevitable shift in runs continued, nevertheless, and the Crimson found itself cooling down quickly, hitting only one of its last nine field goals in the first period. An ugly start to the half by Harvard ended with yet another poor shooting stretch, bringing the energy back into the stands as the buzzer sounded.

The start of the second half was highlighted by the battle of the bigs. Good transition offense by the Crimson involved Lewis being fed early, scoring nine of his 16 points in the second half. On the other end, Brodeur found the free throw line by attacking the paint, adding 14 second-half points to his 20-point total.

Continuing to fight, the Crimson clawed its way back with the help of a three minute Quaker scoring drought in the middle of the second half, going on a 12-0 run itself capped off by a Danilo Djuricic triple to tie the game with four minutes to go. Offensive second chances kept Harvard in the game, with the Crimson grabbing 21 offensive rebounds on the night. However, failing to capitalize on most of those opportunities kept the visitors from taking the lead again.

“It’s definitely a huge point of emphasis for us,” senior Justin Bassey said when discussing offensive rebounding. “We can really exploit the size and depth by getting on the glass and outhustling them.”

A back and forth struggle to close out the game which involved four turnovers in the final minute of regulation came down to the Crimson facing a two point deficit with six seconds to respond. Despite having a rare off-shooting night, sophomore Noah Kirkwood was still trusted with the last attempt. With his back turned to the basket, Kirkwood stunned the Palestra by hitting a tough fadeaway to force overtime.

“We have a lot of confidence in [Noah],” said Amaker. “He had a great look and we had our chance.”

Entering overtime, the Crimson looked to take their first lead since the opening possessions. However, Penn’s offense proved to be too much, as double digit scorers Jordan Dingle and Devon Goodman added to their totals at the start of the third period of play. After going back and forth for five minutes, the Quakers finally seemed to have sealed the game with a couple of trips to the line, sinking three of four free throws to bring the lead to six.

Yet it's foolish to think that a Harvard-Penn contest at the Palestra would end on such an anticlimactic note. With thirteen seconds left on the clock, the Crimson rushed the ball up the court and found Bassey, who had just made a three pointer to cut the lead to three, on the wing. Unfazed by the defender, the senior drained another triple with the chance at a four point play.

Still down by three, the Crimson needed more than just Bassey’s free throw. It couldn’t have been drawn up any better. With his attempt hitting the side of the rim, a Penn rebound would have sealed the game. Yet Harvard’s resiliency and toughness on the offensive glass resulted in the free throw shooter bringing in another board with an open look to tie the game. This time, however, no bucket. Holding their heads, the Harvard bench watched Goodman sprint down the other end with the ball as the buzzer sounded and the Cathedral of College Basketball celebrated.

“We gotta stay together right now,” said Kirkwood. “I think this will be a good challenge for us, but it's definitely tough.”

In a league of back-to-back weekends, a short memory is crucial. Nothing is more important than moving past such a tough loss with another game less than twenty-four hours away. The Crimson will look to forget the heartbreaker when it makes its way to face Princeton (8-8, 3-0) on Saturday. The Tigers, who have already defeated Penn twice this season, will look to remain perfect in conference play.