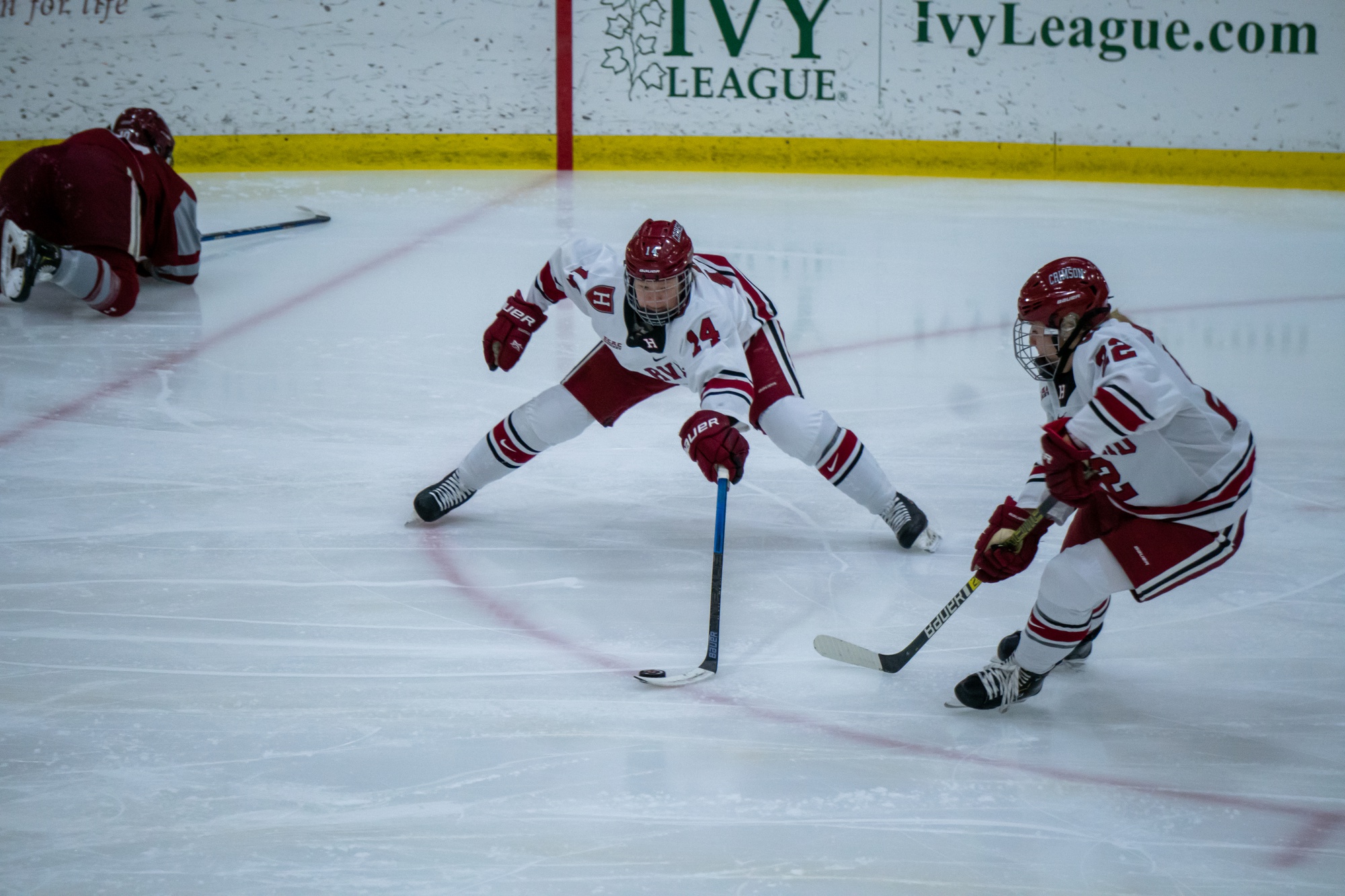 Sophomore forward Dominique Petrie returned to the lineup with two assists on Saturday night after an absence from injury. On Tuesday, Petrie found herself on the scoresheet again, but this time in the penalties section. By Brendan J. Chapuis
By William C. Boggs and Isabel A. Levin, Crimson Staff Writers

BOSTON — Coming off a dramatic comeback win against Colgate on Saturday, Harvard entered the Beanpot consolation looking to add a quality non-conference win to its resume. In an earlier meeting on Dec. 31, the Crimson went on the road to Boston College and soundly defeated the Eagles, pushing the margin to a 7-1 victory over the then top-10 team. In Tuesday’s contest, however, BC capitalized on the opportunity for revenge. After falling to a 3-0 deficit, Harvard only mustered one goal in response as the Eagles soared to a 3-1 victory.

“When teams beat us pretty bad, we kind of get that motivation to...just work harder than them,” said BC first-year forward Hannah Bilka. “Once we get in our groove, I don’t think anyone can beat us.”

Harvard (13-11-1, 12-5-1 ECAC) started off strong, with junior Becca Gilmore firing a high-quality shot on goal just 15 seconds into the game, establishing an offensive presence that lasted through the first period. Despite controlling much of the time of possession and holding a shots-on-goal advantage for essentially the entire opening period, the Crimson did not manage to convert as BC (15-12-3, 13-9-2 WHEA) outlasted the Harvard pressure. Several offensive zone rushes culminated in scrums in front of the Eagle net, but BC’s sophomore goalie Kelly Pickreign pounced on loose pucks before any Harvard attacker could capitalize. On the afternoon, Pickreign, who had only played in 11 games prior to Tuesday, saved 36 of 37 shots on goal.

However, the tone on the ice shifted as Harvard sophomore forward Dominique Petrie headed to the penalty box for hooking with 10:48 remaining in the first. On the ensuing power play, BC would take only one shot—just its second of the game at that point—but would make that shot count. After sophomore forward Kelly Browne delivered a centering pass, freshman defender Alexie Guay hesitated and deked the Harvard defender, setting up an open shot in the slot that beamed over Harvard senior goalie Beth Larcom’s glove and into the top corner.

“I thought that power play was huge,” said Eagles head coach Katie Crowley. “We’ve had great scoring opportunities on our power play. We just haven’t been able to put one in… I thought that really kick-started us offensively and got us rolling a little bit. Obviously, one of the keys to our game was scoring first. That was huge for our bench and huge for our team to just celebrate scoring first and being able to play with the lead for a little bit.”

The second period would see the Eagles offense continuing to find its groove despite the shots-on-goal deficit. Just 3:41 into the middle frame, BC assistant captain and forward Delaney Belinskas received a pass from sophomore defender Cayla Barnes and opted to rifle the puck along the ice rather than take another look at the back door. The decision proved to be the right one as the puck glided along the ice and through Larcom’s five-hole. After doubling their lead in the initial minutes of the second, the Eagles would add their third tally of the game. On a point blast from first-year defender Hadley Hartmetz, Bilka turned her hands over to redirect the shot just past Larcom’s toe and inside the post. The second period opened with a close 1-0 match but finished with a comfortable BC lead.

“Make an extra play, get the puck stripped, don’t protect the puck, you know, just pretty soft plays,” described Harvard head coach Katey Stone of the Crimson’s second period performance. “At the end of the day, we made too many soft plays tonight.”

The Crimson managed a brief offensive resurgence in the final stanza, as a flurry of two-on-one’s and breakaways resulted in the team’s only score of the night. Tic-tac-toe passing culminated with sophomore forward Anne Bloomer sliding the puck across the net to fellow sophomore forward Kristin Della-Rovere, who flicked the puck into an open net. Despite gaining back some momentum after the goal, Harvard failed to convert any further attempts. The Crimson consistently broke away down the ice, maneuvering the puck in front of the net. Nonetheless, each shot sailed wide, flew straight at Pickreign, or was fended off by the goaltender’s quick reaction.

With 2:05 left in the game, Larcom headed to the bench as Harvard attempted a desperate comeback. Despite a flurry of shots, including a backdoor attempt by sophomore defender Maryna Macdonald and a close scuffle at the net with 22 seconds remaining, the score remained 3-1. The Eagles’ strong defense made it difficult for the Crimson to pull off clean looks. Often, when a Harvard skater closed in on Pickreign, a BC defender would swoop in to thwart the attempt. Ultimately, as the buzzer signaled the third period’s close, Harvard fell 3-1 despite winning 41 of 64 faceoffs and leading 37-25 in shots on goal.

“Just about every shot we took the goaltender saw like a beach ball. We didn’t have any traffic in front,” Stone commented. “We didn’t take shots for rebounds. We did not make her [Pickreign’s] night as difficult as it could’ve been.”

Heading into the game, the Crimson looked to extend the momentum it had built over the weekend during a dramatic comeback against Colgate. Nonetheless, Harvard did not replicate the same spirited effort and will have to regroup in away conference games against Rensselaer and Union this weekend.

“I think we were trying to be too fancy at the beginning of the game,” explained Stone when asked about the contrast between tonight’s game and the Crimson’s victory against Colgate. “It’s a little bit of Dr. Jekyll and Mr. Hyde at times, but BC had the better of us tonight.”

That said, Tuesday’s loss does not take away from the critical and improbable nature of Harvard’s win on Saturday. With under three minutes remaining in the contest, the Crimson found itself trailing by a goal until junior forward Keely Moy provided the late-game heroics. With 2:48 left in the game, Moy collected a rebound off the end boards and deposited the puck into the open net. Just 1:21 later, Moy completed the comeback with a highlight-worthy game-winner to complement her game-tying goal. Skating towards the blue line, Moy doubled back into the zone along the boards before cutting to the slot and finding a soft spot in the defense. With Colgate defenders crashing in, she ripped the puck along the ice for the score, propelling Harvard to a 4-3 final.

Moy would not be the only impact player for the Crimson. Junior goalie Becky Dutton—who had just tallied 35 saves in the Beanpot semifinals—turned away 38 of the 41 shots on goal that came her way. In a small sample size of just four starts, Dutton has posted a 0.949 save percentage and a 1.62 goals against average. Likewise, in her first game back from injury, sophomore forward and lead point scorer Dominique Petrie contributed two assists to Harvard’s victory over Colgate.

“[Having Petrie back] helps us a lot. She’s a dominant player and she’s probably one of the best forecheckers we’ve ever had,” Stone said.

Taken together, Saturday and Tuesday’s games represent opposite trends for the Crimson, though both rematches contrasted their earlier season meeting In Harvard’s first match against Colgate on Jan. 17, the Raiders gained a two-goal lead in the third and protected it until adding an empty-netter for a 5-2 win. On Saturday, Harvard would avenge the loss with a third-period flurry of its own. On Tuesday, the Crimson would be the target of another team’s payback as the Eagles converted their 7-1 defeat into a 3-1 triumph.

Unlike BC, however, Colgate plays in the ECAC as well and seemed to be approaching Harvard in the standings. A win for the Raiders would have drawn the squad to within two points of the Crimson, challenging Harvard’s fourth-place conference position and allowing three teams (Yale, Quinnipiac, and Colgate) within three points. The top four positions take on added importance as these four teams earn home-ice advantage for the ECAC quarterfinals. With four games left to play in the regular season, Harvard certainly controls its destiny as it strives to hold the fourth spot and even gain the third (the Crimson sit only one spot behind Clarkson, with whom it will have a head-to-head matchup at Bright-Landry in the final weekend of the season). On the other hand, the Bulldogs, Bobcats, and even the Raiders can overtake Harvard, giving the team a clear mission for its final stretch.

“We’ve got to be better. We only have 29 regular season games to play and every single one of them is huge. Whether it’s on a Tuesday night or Friday night or Saturday afternoon, we’ve got to show up.” Stone said. “Now, we have an opportunity with four league games left to get a home-ice playoff series that’s in our hands and see what we’re made of.”

Caption: Sophomore forward Dominique Petrie returned to the lineup with two assists on Saturday night after an absence from injury. On Tuesday, Petrie found herself on the scoresheet again, but this time in the penalties section.